All articles from this author
Maria Rodriguez Moya


All articles from this author
Anna Wrona-Piotrowicz


All articles from this author
Janusz Zakrzewski


All articles from this author
Renata Kontek


All articles from this author
Gabriela Gajek

The biological activity of aminophosphonic systems is very well known and described, in aspect of their crop protective [1], antibacterial [2] or anticancer properties [3]. Various C-aryl substituted derivatives of phosphonoglycine have been synthesized including those of benzene and several polycyclic aromatic hydrocarbons [4], five- [5] and six-membered [6] heteroaromatic compounds and even ferrocene [7]. In contrast, pyrene-based derivatives, e.g., amino(pyrene-1-yl)methyl phosphonic acid derivatives have been described only twice in the chemical literature. Firstly, Harry Hudson’s team [8] published the synthesis of diethyl N-benzhydrylamino(pyrene-1-yl)methylphosphonate in a series of N-benzhydryl substituted aminomethyl phosphonates. Recently, an Indian group [9] reported the synthesis of a number of N-aryl substituted, diethyl amino(pyrene-1-yl)methyl phosphonates and some preliminary studies on their fluorescence properties.

Such a poor knowledge about these compounds is astonishing in the light of the fact that the phosphonic analogues of phenylglycine, exhibited their herbicidal activity [10], and are used as plant growth regulators [10], agrochemical fungicides [11,12] and glutamate receptor modulators [13]. It is therefore expectable that C-pyrene derivatives may have similar or even more promising biological properties.

Although fluorescence properties of pyrene-based aminophosphonic derivatives have been mentioned only once in a preliminary form [9], fluorescence emission of their azomethine precursors was reported for pyrene-1-carboxaldehyde thiosemicarbazone and Schiff bases as well as their metal complexes [16-21]. Such properties were described for, e.g., ruthenium(II) complexes of (5-chloropyridin-2-yl)-(pyren-1-yl)methyleneamine [17], a N-(1-pyrene)methylideneglucosamine mercury complex [18], a N-(pyren-1-ylidene)-2-hydroxyaniline-copper(II) and -zinc(II) complexes [19] or N-(pyren-1-ylidene)-4-carboxyaniline-Fe(II) and -Cr(III) complexes [20]. Several phosphorus-supported ligands containing a pyrene-1-carbimino moiety [21] were found to be fluorescence-based sensors of Cu(II) and Mg(II) cations.

Considering all above, we decided to synthesize a series of N-substituted derivatives of C-(pyren-1-yl)phosphonoglycine and to investigate their cytotoxic and fluorescence properties.

Synthesis of aminophosphonic acid derivatives 3, 4 and 5

Schiff bases 1a–h were prepared by refluxing pyrene-1-carboxaldehyde with an amine in methanol, hexane or dichloromethane for 24 hours and were used for further conversions as obtained. This harsh method to prepare imines had to be used, because the simple mixing of reagents in methanol at room temperature, which is the common mode d’emploi in such cases [5,7], did not provide satisfactory results. The reaction completion was monitored by 1H NMR and obtained imines 1a–h were isolated by simple evaporation of the solvent and were used for the further reaction without purification.

Aminophosphonates 3Aa–h, 3Ba–e and 3Ca–d, 3Cg have been synthesized via an aza-Pudovik reaction [22], i.e., the addition of the appropriate phosphite 2A–C to the azomethine bond of the Schiff bases 1a–h. Nevertheless, the important modifications had to be introduced to the described procedures [22,23]. The 1-pyrene moiety is a troublesome substituent due to its spatial volume, which tends to disturb in the course of the reactions. Attempts to use any of common solvents failed as no or only a weak progress of the reaction was noticed (Scheme 1). The best solution was to apply phosphites simultaneously as solvents and reactants, which however forced to use them in a high excess. This necessity resulted in troubles with purification, implicating a particular approach to each case.

Dimethyl aminophosphonates 3Aa–Ah were purified by washing their dichloromethane solutions with a saturated aqueous sodium bicarbonate solution, which allowed to remove dimethyl phosphite. This procedure was followed by column chromatography, and, in a case of N-benzyl derivative 3Aa, triturating the product with diethyl ether until the precipitation of a solid was additionally carried out.

The most complex procedure was used to isolate and to purify the dibenzyl aminophosphonates 3Ca–d and 3Cg. The crude reaction mixtures were dissolved in small amounts of pyridine and then, treated with elemental iodine to decompose dibenzyl phosphite. This was followed by washing the mixture dissolved in dichloromethane with saturated aqueous solutions of sodium thiosulfate and then sodium bicarbonate. The purification with column chromatography allowed to afford pure products in satisfactory yields.

Interestingly, attempts to obtain the hydroxyphosphonate 5A in conditions typical for the Pudovik (not aza) reaction failed – the product could be obtained only when tert-butylamine (or isopropylamine) was present in the reaction mixture (Scheme 1).

All obtained aminophosphonates 3Aa–j, 3Ba–e, 3Ca–d and 3Cg as well as the hydroxyphosphonate 5A gave satisfactory results of in the elemental analysis and were characterized by means of 1H, 13C and 31P NMR and IR spectroscopy with all signals attributed to each nucleus. Compounds were also characterized by melting point measurements.

Jayaprakash et al. [9] reported the synthesis of several pyrene-derived aminophosphonates via a silica-catalyzed Kabachnik–Fields reaction. Among others, they synthesized three amino-phosphonates 3Bb–d, reporting their melting point values and their spectral characterizations. Melting point values quoted by the authors differed from values measured by us. The reason of such a discrepancy remains unclear, it might be caused by the different eluents used – we eluted products using chloroform, while Jayaprakash et al. [9] used hexane and ethyl acetate (2:3).

The other discrepancy concerns the 1H NMR spectra, and particularly their aromatic regions. In all three cases, Jayaprakash et al. [9] quoted all aromatic signals as broad multiplets, whereas we were capable to distinguish clearly signals of pyrene protons as a series of distinct doublets and approximate triplets. Phenyl ring signals were also visible, e.g., the non-substituted phenyl ring gave a triplet, doublet of doublets and a doublet, the 4-methyl substituted phenyl moiety demonstrated a distinct AA’XX’ system, whereas the 4-methoxy derivative shows an AA’BB’ system. All these phenomena are clearly visible in the 1H NMR spectra and scans of them are collected in Supporting Information File 1.

Aminophosphonic acids 4a and 4c were prepared using the classical cleavage of dimethyl aminophosphonates 2Aa and 2Ac with trimethylsilyl bromide in dry dichloromethane. After 24-hours reaction, the reaction was quenched by methanol to give, after routine work-up the desired acids 4a and 4c (Scheme 1). They were characterized by NMR spectroscopy (1H, 13C and 31P), IR spectroscopy, melting point measurements and elemental analysis.

The obtained phosphonic derivatives were then selected and their biological and photophysical properties were studied.

The widespread use of pyrene derivatives as luminescent probes in biological research [24-27] prompted us to study emissive properties of the synthesized aminophosphonates. We have measured their electronic absorption and emission spectra in chloroform solution. Although photodecomposition of pyrene in this solvent has been reported [28], we found that this is not the case of the compounds under study. To avoid excimer formation, spectra were recorded at low sample concentrations (1 μM). We have found that all compounds under study were emissive albeit emission quantum yields varied from ≈0.01 to ≈0.7 (Table 1). The typical absorption and emission spectrum (those of compound 3Aj), compared with the spectra of pyrene are shown in Figure 1. The spectra are closely similar and show vibronic structure characteristic for monomeric fluorophores. The spectra of 5 are slightly shifted bathochromically (9 nm and 4 nm for the absorption and emission spectrum, respectively) in comparison to the spectra of pyrene. In this context, it should be noticed that spectra reported in [9] were measured at significantly higher concentrations (0.5 mM) and are broad and structureless. Therefore, they should rather be assigned to fluorophore aggregates (excimers).

aExcitation was set at the maximum of the lowest energy absorption band. bMeasured for aerated solutions. Quenching by dissolved dioxygen was not observed. cMeasured for an aqueous 0.01 PBS (phosphate-buffered saline) solution (pH 7.4)

The spectra of 3Aj were run in solvents of varied polarity (Figure 2) and display the well-known Ham effect (dependence of the ratio of intensities of III/I vibronic bands on the medium polarity) [26].

The highest emission quantum yield (0.68) was found for aminophosphonic acid 4a in aqueous buffer (pH 7.4). A similar phenomenon of higher emission efficiency of 1-(pyrene-1-carboxamido)methylphosphonic acid in comparison to a corresponding aminophosphonate was earlier reported [29].

The aforementioned data suggest possible application of compound 3Aj (and other exhibiting similar emission quantum yield) as molecular probes monitoring micropolarity of the fluorophore environment. On the other hand, water-soluble 4a might be used for biological imaging.

The cytotoxic effects of dimethyl aminophosphonates 3Aa, 3Ab, 3Ac, 3Ad, 3Ai and dimethyl [hydroxy(pyren-1-yl)methyl]phosphonate (5A) were investigated with two human colorectal carcinoma cell lines: HT29 and HCT116 and also on the normal human lymphocytes. For this a standard MTT (3-(4,5-dimethylthiazol-2-yl)-2,5-diphenyltetrazolium bromide) test was used and results presented as IC50 values (i.e., the concentration of the compound that inhibits 50% growth). The activity of the tested compounds was studied in the concentration range from 5 to 600 µM. The obtained IC50 values are summarized in Table 2.

The activity of tested compounds varied from IC50 = 15.8 µM to 105.8 µM. As it can be seen, the most interesting results were obtained for compound 3Ad, bearing the p-methoxyphenyl moiety (Figure 3). It has exhibited significant cytotoxicity against both tested cancer cell lines HT29 (IC50 = 24.2 µM) as well as HCT116 (IC50 = 20.8 µM) cells, and it simultaneously was not strongly toxic for normal human lymphocytes (IC50 = 230.8 µM). However, HT29 cells were more resistant to 3Ad than HCT116 cells. Therefore, the aminophosphonate 3Ad showed a carcinoma-specific cytotoxicity against human colon cancer cells. A similar correlation was observed for the aminophosphonic derivative 3Ac, which was strongly cytotoxic against both colon cancer cell lines, but in contrast to 3Ad, was also toxic for lymphocytes. Paradoxally, compound 3Ac, bearing a 4-C6H4-CH3 moiety, exhibited the most potent cytotoxicity from all tested compounds: IC50 (HT29) = 15.8 µM and IC50 (HCT116) = 15.9 µM. On the other hand, 3Ac had the highest IC50 value against normal cells from all tested compounds. The compound 3Ab was the less toxic for normal cells (IC50 = 334.2 µM) from among all tested compounds. However, 3Ab was also the least toxic against both tested cancer cell lines HT29 (IC50 = 105.8 µM) and HCT116 (IC50 = 70.8 µM). Compound 5A has exhibited a significant cytotoxicity against HT29 (IC50 = 25.8 µM). For compounds 3Aa and 3Ai, the received results were comparable, except for the results against HT29, the level of the cytotoxicity was slightly higher for 3Ai. Simultaneously, cytotoxicities of both aminophosphonates (3Aa and 3Ai) against normal lymphocytes were rather high (IC50 = 89.2 and 75.8 µM, respectively).

On the basis of the results presented in Table 1, it can be concluded that the type of functional group has a large influence on the biological properties of the tested compounds. These results indicate that the presence of a methylphenyl group causes a compound to be toxic for normal lymphocytes (3Ac and 3Ai); a similar phenomenon was observed for N-benzyl substitution (3Aa). Results obtained for the α-hydroxyphosphonate 5A (IC50 = 25.8 µM against HT29) give the impact to look for potential anticancer agents among the α-hydroxyphosphonic derivatives.

The influence of a series of derivatives on two colon cancer cell lines HT29 and HCT116 was also investigated. The most interesting results were obtained for dimethyl N-(4-methoxyphenyl)amino(pyren-1-yl)methylphosphonate 4d, which was found to be cytotoxic for these two colon cancer cell lines (IC50 ≈ 20 μM), but showed nearly no toxicity towards lymphocytes (IC50 ≈ 230 μM). Although, dimethyl N-(4-methylphenyl)amino(pyren-1-yl)methylphosphonate 4c demonstrated important cytotoxicity (IC50 ≈ 15 μM) for both cancer cell lines, it was unfortunately found to be toxic towards normal lymphocytes (IC50 ≈ 17 μM).

More profound studies on biological properties of selected compounds (necrosis vs apoptosis, mechanism of action) are being developed and will be published in the near future.

© 2016 Lewkowski et al.; licensee Beilstein-Institut.
This is an Open Access article under the terms of the Creative Commons Attribution License (http://creativecommons.org/licenses/by/2.0), which permits unrestricted use, distribution, and reproduction in any medium, provided the original work is properly cited.
The license is subject to the Beilstein Journal of Organic Chemistry terms and conditions: (http://www.beilstein-journals.org/bjoc) 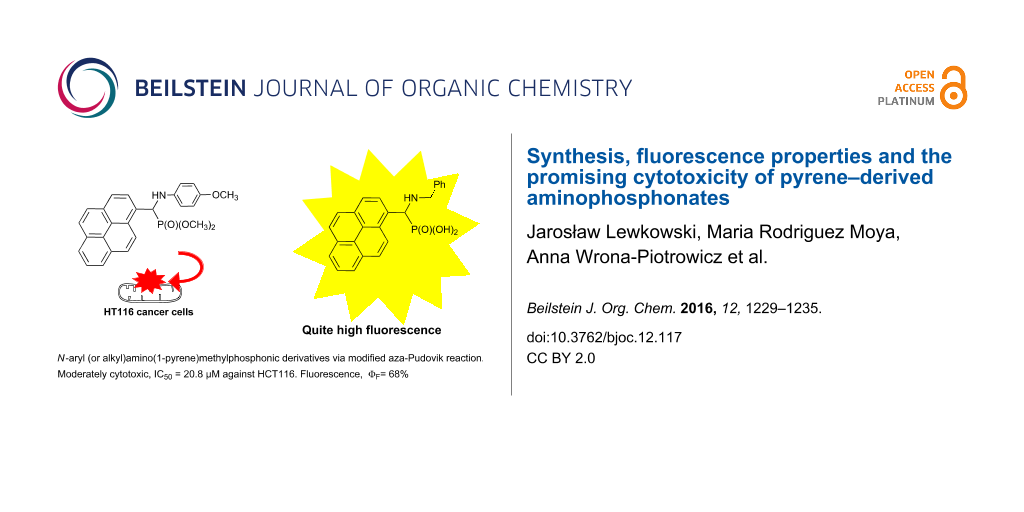