All articles from this author
Martin Greenhall


All articles from this author
Camillo Zarantonello

Organic compounds with a pentafluorosulfanyl (SF5) group are promising candidates in the development of new agrochemicals, pharmaceuticals and advanced materials [1-3]. This is due to an unusual combination of properties such as high stability [4], lipophilicity [5] and strong electron-withdrawing character [6] similar but more extreme than the trifluoromethyl group. Currently, the limiting factor for a more widespread use of SF5 compounds is the low accessibility of basic building blocks and the lack of understanding their chemical behavior. For aromatic SF5 compounds, two main synthetic approaches exist. The first one is a direct fluorination of nitro-substituted diaryl disulfides leading to 3- or 4-nitro-1-(pentafluorosulfanyl)benzenes [7-10]. This reaction is conducted in tens of kilogram scale in industry. The second method is known as Umemoto’s synthesis and starts with aromatic thiols or diaryl disulfides which are converted to arylsulfur chlorotetrafluorides [11,12]. Fluorination in the second step affords arylsulfur pentafluorides [11,13]. Umemoto’s synthesis does not require handling the elemental fluorine, gives better yields, and displays a wider substrate scope than the direct fluorination method. However, nitro(pentafluorosulfanyl)benzenes are widely-available primary industrial products and starting materials to other SF5-benzenes which were prepared by reduction followed by condensation or diazotization chemistry [8,14-16], SEAr [17], SNAr [18-24], or metal-catalyzed cross-coupling reactions [25-27]. Synthetic methods to novel SF5-containing building blocks are sought after and drive the development of applications of these compounds. In this work, we explore SNAr chemistry of 3-fluoro-5-nitro-1-(pentafluorosulfanyl)benzene which was initially obtained as a minor byproduct of direct fluorination of 1,2-bis(3-nitrophenyl)disulfane but can be also prepared by other methods, and show that substitution for aromatic fluorine or hydrogen atoms provide a range of novel structurally diverse SF5-benzenes.

Direct fluorination of 1,2-bis(3-nitrophenyl)disulfane on kilogram scale led to the main product 3-nitro-1-(pentafluorosulfanyl)benzene (1) which was isolated in 39% yield [8] and a byproduct 3-fluoro-5-nitro-1-(pentafluorosulfanyl)benzene (2) in 6% GC yield (2–3% isolated yield, Scheme 1). Compound 2 was isolated from the mixture by distillation; redistillation afforded 2 in 99% purity (detected by GC). However, for investigations of SNAr of 2, a more efficient process for its synthesis was required. With higher excess of fluorine, the 2:1 ratio increased. Therefore, the synthesis of 2 by the direct fluorination of 1 was investigated (Scheme 2 and Figure 1). The reaction progress was monitored by GC analysis. In acetonitrile, the reaction required more than 16 equivalents of F2 to reach maximal conversion of 2 (around 60%). With higher amounts of fluorine gas the conversion of 2 sharply decreased and the amounts of (poly)fluorinated aromatic byproducts 3 and 4 increased (Figure 1, left). The amount of non-volatile material (tar) in the final product mixture (after 20 equiv of F2 added) was 28% by weight as determined by Kugelrohr distillation. When the direct fluorination was performed in anhydrous HF a markedly different result was obtained. To reach maximal conversion of 2 (around 60%), only a 3.6-fold excess of F2 was required (Figure 1, right). However, in this case, higher amounts of byproducts, particularly difluoroderivatives 4 were observed. The amount of tar after the addition of 4.2 equivalents of F2 was only 5%. Purification of compound 2 from 3 and 4 by distillation or column chromatography was not successful. Therefore, for preparative experiments we decided to run the fluorination in MeCN to about 40% conversion and isolated 2 from unreacted 1 by flash chromatography (Scheme 3).

Another method for the synthesis of 2 is the fluorodenitration of known 3,5-dinitro-1-(pentafluorosulfanyl)benzene (5) [10,28]. The reaction with TBAF hydrate resulted in clean substitution of only one nitro group for the fluorine atom (Scheme 4).

It is well known that ipso attack of nitroaromatics by nucleophiles (SNAr) is only a secondary process. Under kinetic conditions the aromatic system is initially attacked by a nucleophile in ortho or para position to the nitro group, which was exploited in oxidative nucleophilic substitution for hydrogen reactions (ONSH) with organolithium or magnesium species or in vicarious nucleophilic substitution reactions (VNS) with carbon, oxygen or nitrogen nucleophiles [29]. VNS is a very powerful process for selective alkylation, amination and hydroxylation of nitroaromatics and was reported to proceed efficiently on 1 and its para-isomer [19-21]. In general, the reactions are characterized by short reaction times, low temperatures and an equimolar amount of the nucleophile. The results of VNS reactions with compound 2 are shown in Table 2. With carbon nucleophiles the reactions proceeded in good yields except for diethyl chloromethylphosphonate. A very short reaction time was needed in the reaction with bromoform to avoid decomposition of the tribromomethyl anion to dibromocarbene (Table 2, entry 4). Direct hydroxylation with cumene hydroperoxide required the use of liquid ammonia as a co-solvent (Table 2, entry 5). For direct amination 1,1,1-trimethylhydrazinium iodide was used, which upon deprotonation with strong base provided the nitrogen nucleophile containing the leaving group (Me3N) (Table 2, entry 6). High regioselectivities were observed in all cases except for the cyanomethylation reaction (Table 2, entry 3). In general, regioselectivities in VNS reactions were higher than for analogous reactions of 1 which can be explained by the presence of additional steric hindrance of the fluorine substituent in 2. It is important to note that under the VNS conditions and in the presence of strong nucleophiles and base (t-BuOK), fluorine atoms of 2 and 4 remained intact.

Synthesis and characterization of all products, copies of 1H, 13C, and 19F NMR spectra of newly synthesized products.

This work was supported by the Academy of Sciences of the Czech Republic (Research Plan RVO: 61388963) and by the Initial Training Network, FLUOR21, funded by the FP7 Marie Curie Actions of the European Commission (FP7-PEOPLE-2013-ITN-607787).

© 2016 Ajenjo et al; licensee Beilstein-Institut.
This is an Open Access article under the terms of the Creative Commons Attribution License (http://creativecommons.org/licenses/by/2.0), which permits unrestricted use, distribution, and reproduction in any medium, provided the original work is properly cited.
The license is subject to the Beilstein Journal of Organic Chemistry terms and conditions: (http://www.beilstein-journals.org/bjoc) 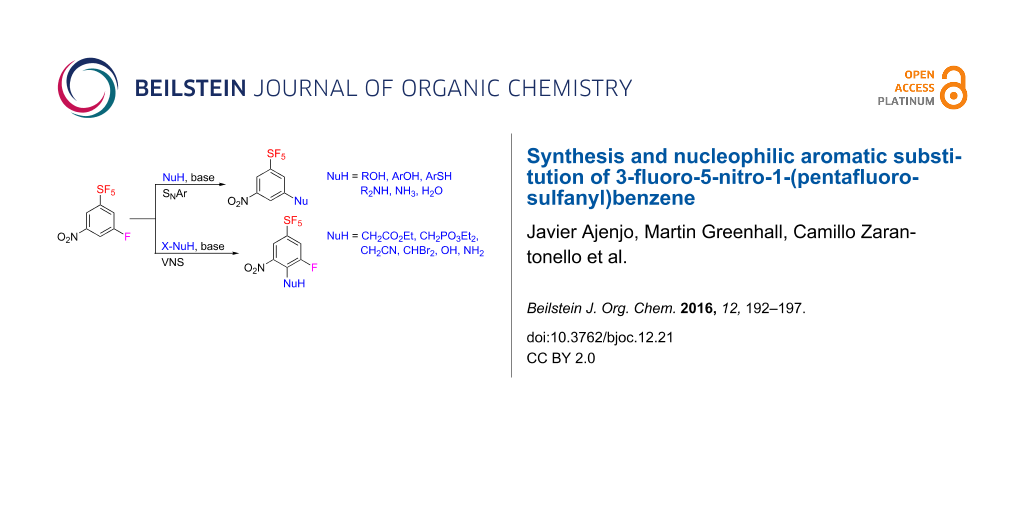