All articles from this author
Ádám Tajti


All articles from this author
Anna Ádám


All articles from this author
István Csontos


All articles from this author
Konstantin Karaghiosoff


All articles from this author
Mátyás Czugler


All articles from this author
Péter Ábrányi-Balogh


All articles from this author
György Keglevich

A family of α-aryl-α-aminophosphonates and α-aryl-α-aminophosphine oxides was synthesized by the microwave-assisted solvent-free addition of dialkyl phosphites and diphenylphosphine oxide, respectively, to imines formed from benzaldehyde derivatives and primary amines. After optimization, the reactivity was mapped, and the fine mechanism was evaluated by DFT calculations. Two α-aminophosphonates were subjected to an X-ray study revealing a racemic dimer formation made through a N–H···O=P intermolecular hydrogen bridges pair.

α-Aminophosphonates and related derivatives, considered as the structural analogues of α-amino acids, have significant importance, especially in medicinal [1-3] and agricultural chemistry [4,5], due to their potential biological activity. The two major synthetic routes towards α-aminophosphonate derivatives embrace the Kabachnik–Fields (phospha-Mannich) three-component condensation, where an amine, an aldehyde or ketone and a >P(O)H reagent, such as a dialkyl phosphite or a secondary phosphine oxide react in a one-pot manner [6-10], and the Pudovik (aza-Pudovik) reaction, in which a >P(O)H species is added on the double bond of imines [11-14]. In this article, the latter pathway is utilized for the synthesis of α-aryl-α-aminophosphonates and α-aryl-α-aminophosphine oxides. In most cases, the additions were carried out in the presence of a catalyst and solvent. The use of many types of catalysts, such as acids (HCOOH) [15] or bases (NaOH [16], 1,8-diazabicyclo[5.4.0]undec-7-ene (DBU) [17], tetramethylguanidine (TMG) [18,19]), p-toluenesulfonyl chloride [20], metal salts (MgSO4) [21], CdI2 [22]), metal complexes (BF3·EtO2 [23,24], t-PcAlCl [15]), and phase-transfer catalysts [25] were reported. The enantioselective hydrophosphonylation of imines was also described, where chiral catalysts were applied in various solvents [26-32]. There are a few examples, where the reactions were performed in a solvent in the absence of any catalyst [33-38], while in a few cases the catalysts, i.e., PTSA [39], Na [40], TEA [21] or MoO2Cl2 [41], were used under solvent-free conditions. As for the microwave (MW)-assisted additions, only two cases were reported, but the catalytic variations were carried out in kitchen MW ovens [32,42], and thus, do lack of exact temperatures, these results cannot be reproduced. From a ’green chemical’ point of view, the solvent-free and catalyst-free additions are of interest, however, in these reactions, relatively long reaction times (1.5–10 h), and/or unreasonably large excesses (50–150 equiv) of the dialkyl phosphite were applied [43-52].

At first, the imine starting materials 1 were prepared by the condensation of benzaldehyde and its chloro-substituted derivatives with primary amines, such as butyl-, cyclohexylamine or aniline at room temperature under solvent-free conditions (Scheme 1).

Then, the reaction of N-benzylidene(butyl)amine (1a) with four different dialkyl phosphites and diphenylphosphine oxide was investigated under MW-assisted solvent-free conditions searching for the optimum temperature and reaction time (Table 1). The products were α-aminophosphonates 2a–d and α-aminophosphine oxide 2e.

aOn the basis of GC. bAfter column chromatography. cIn these experiments byproduct 3 was also formed in a proportion of 6% based on GC–MS:

Next N-benzylidene(cyclohexyl)amine (1b) was tried in the aza-Pudovik reaction (Table 2).

N-Benzylideneaniline (1c) revealed a somewhat enhanced reactivity in the reaction with the >P(O)H species (Table 3). The electron-donating butyl and cyclohexyl groups decrease the partial positive charge on the carbon atom of the >C=N- unit, as compared to the phenyl substituent. Hence, complete additions could be accomplished already at 80 °C within reaction times of 10–30 min. The yields of aminophosphonates 5a–c were in the range of 92–97%, while the benzyl ester (5d) was obtained in a yield of 70% (Table 3, entries 1–4). The aminophosphine oxide 5e was isolated in an 89% yield (Table 3, entry 5).

Next, N-chlorobenzylidene(butyl)amines 1d–f were reacted with dialkyl phosphites at 80–100 °C to obtain the corresponding α-aminophosphonates 6a–c, 7a–c and 8a–c. The results are collected in Table 4. The dialkyl ((butylamino)(chlorophenyl)methyl)phosphonates (6–8, a–c) were prepared in yields of 72–94% (Table 4, entries 1–9). There were no observable differences in the reactivities, as compared to the unsubstituted model compound 1a.

Then, we wished to follow the addition reaction of DEP to N-benzylidene(butyl)amine (1a) at 80 °C in acetonitrile (Scheme 2) by in situ Fourier transform IR spectroscopy. Initially the IR spectra of the reaction components were recorded: imine 1a, DEP and diethyl ((butylamino)(phenyl)methyl)phosphonate (2b) (Table 5 and Figure 1). The spectrum of imine 1a has a strong absorption band at 1648 cm−1 corresponding to νC=N. At the same time, DEP may be identified by the strong signals at 961, 1042 and 1251 cm−1 assigned to the νP–O–C and the νP=O vibrations, respectively. The similar νP–O–C and νP=O absorptions of the product α-aminophosphonate 2b were somewhat shifted to 1026, 1057 and 1242 cm−1, respectively.

A segment of the time-dependent IR spectrum (3D diagram) can be seen in Figure 2.

The obtained results from this study are shown in Figure 3 and show the concentration profile of the starting components imine 1a and DEP and the product 2b. The diagram was constructed by a so-called deconvolution on the basis of the decrease/increase of the different absorptions on the reaction time scale. This calculation (MCR-ALS, multivariate curve resolution – alternating least squares) gives the concentration profiles of the components and also the spectra of pure components. From Figure 3, it can be seen that the addition reaction was complete after 3.5 h.

Finally, the characteristic IR absorptions were taken from the calculated IR spectra and compared with those obtained in acetonitrile solutions (Table 6). As can be seen, the agreement is rather good.

Large crystals of 5b are composed of very thin plates and one of these plates was dissected and used for X-ray measurement at low temperatures. There seems to be a slight disorder, which becomes evident in the ellipsoids of the aniline ring and one of the methyl carbon atoms (Figure 4).

The crystal structure of compound 5b was published almost 40 years ago [61], and a subsequent NMR and theoretical study was also done for comparative purposes [62]. This latter work claims SS and RR dimers, which is obviously wrong, as the centrosymmetric dimers formed must be RS due to symmetry. The crystal structure of 5b does not undergo a phase transition at −100 ºC, hence, it must be similar to the sample studied in the earlier work at room temperature [62]. Apart from the formation of the centrosymmetric dimer through a strong N–H···O=P hydrogen bridge (cf. Table 7), there is a C–H…O short contact to an ester oxygen atom of a next, translated and inverted 5b molecule, as well. In this way, sheets of symmetry center related dimers fused into endless sheets are formed in the crystal (cf. Supporting Information File 1, Figure S1).

In the crystal structure of 5d (Figure 5), the formation of hydrogen-bonded dimers occurs through the same N–H···O=P hydrogen bonds in the solid state (Table 7 and Supporting Information File 1, Figure S2), too.

A short intramolecular H(1)···H(10) distance in 5b appears to be nearly by −0.3 Å shorter than the sum of vdW radii (2.11(2) << 2.40), and is somewhat similar to those observed in other aminophosphonates [63]. No such short distance is seen in compound 5d, where all H···H contacts appear around or longer than the respective sums of van der Waals radii, and the only short attractive contact is in the H-bridge promoted dimer.

The calculations were carried out by the B3LYP/6-31G (d,p) method. In the solvent-free reaction, the dielectric constant of the P reagent was estimated as 78.3553. This value was taken into account as an implicit solvent effect. First, the tautomeric equilibria of dialkyl phosphites and diphenylphosphine oxide were studied (Table 8). It was not surprising to find that the pentavalent tetracoordinated form A was by 25–28 kJ mol−1 more stable than the trivalent form B.

The calculations predicted the attack of the trivalent form B of the P reagent on the nitrogen atom of the C=N unit of the imine 1. Moreover, the P–C and the N–H bonds are formed in a single concerted step, via five-membered transition states TS 2, 4, and 5 (Table 9) and the additions are in all cases exothermic. The reactions with dimethyl phosphite are more favorable than those with diphenylphosphine oxide. It can also be seen that the additions to N-benzylideneaniline have the greatest driving force of ca. 31 kJ mol−1. The energy content of the TSs fall in the range of 77–89 kJ mol−1.

The energy diagrams for the reactions with dimethyl phosphite and diphenylphosphine oxide are shown in Figure 6 and Figure 7, respectively.

In conclusion, we have developed an efficient, solvent-free and catalyst-free MW-assisted method for the Pudovik synthesis of α-aryl-α-aminophosphonates and α-aryl-α-aminophosphine oxides. This method is a novel approach for the preparation of the target compounds, and was optimized for each case. Twenty-four derivatives were isolated and characterized. Except six compounds, these were new compounds. Furthermore, the reactivity was mapped, and the mechanism was evaluated by B3LYP/6-31G (d,p) calculations. The crystal structure of two α-aminophosphonates was studied by X-ray analysis suggesting centrosymmetric dimers.

The above project was supported by the Hungarian Scientific Research Fund (PD111895) and the Hungarian Research Development and Innovation Fund (K119202).

Introduction of an isoxazoline unit to the β-position of porphyrin via regioselective 1,3-dipolar cycloaddition reaction

© 2017 Bálint et al.; licensee Beilstein-Institut.
This is an Open Access article under the terms of the Creative Commons Attribution License (http://creativecommons.org/licenses/by/4.0), which permits unrestricted use, distribution, and reproduction in any medium, provided the original work is properly cited.
The license is subject to the Beilstein Journal of Organic Chemistry terms and conditions: (http://www.beilstein-journals.org/bjoc) 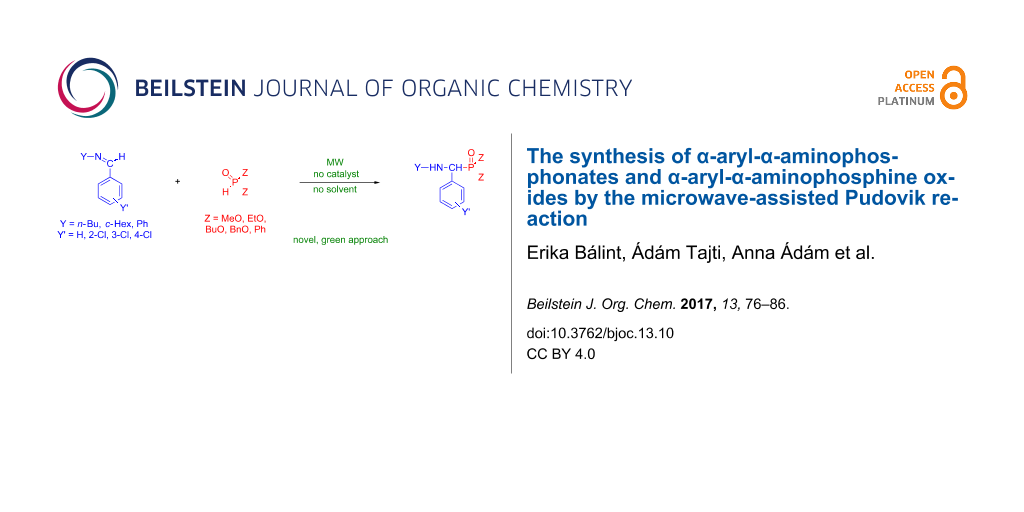