All articles from this author
Dang-Wei Qian


All articles from this author
Shang-Dong Yang

Phosphoric esters are widely used in agrochemistry, biological sciences, clinical treatments, as well as in general organic transformations [1-9]. Therefore, many efficient methods have been developed in the past decades to synthesize different types of phosphoric esters [10-18]. Traditional methods for the construction of P−O bonds in phosphoric esters rely on the phosphorylation of alcohols or phenol with highly air-sensitive and hazardous phosphorus halides, with the assistance of a suitable base [19-24]. As an alternative pathway, the phospha-Brook rearrangement [25-30] represents a green approach to phosphoric esters since it uses α-hydroxyphosphonates, which can be easily prepared by Pudovik reaction (addition of an unsaturated carbonyl compound to a labile P–H bond), to undergo an efficient intramolecular rearrangement, producing phosphoric esters [31-42]. For example, in 2005, Kaïm and co-workers have accomplished the synthesis of phosphoric esters through a 1,8-diazabicyclo[5.4.0]undec-7-ene (DBU)-catalyzed Pudovik reaction–phospha-Brook rearrangement sequence [43]. A decade later, Chakravarty and colleagues reported the efficient synthesis of organic phosphates from ketones and aldehydes using n-BuLi as catalyst through a similar transformation under solvent-free conditions [44]. Recently, Zhang’s group disclosed a cesium carbonate-catalyzed Pudovik reaction–phospha-Brook rearrangement sequence and extended the phosphorus source from phosphate to phosphonate [45]. Despite of these important advancements, all of the above transformations were carried out under basic conditions, and thus impose barriers for substrates that bear base-sensitive functional groups. More importantly, heteroatom-containing ketones and aldehydes have been proven to be challenging substrates for all of these existing systems [46-49]. Thus, searching for an alternative catalytic system, for example, a mild Lewis acid-catalyzed system, to achieve a wide applicability and provide a substrate scope complementary to previously reported base-catalyzed reactions, is a highly desirable task. However, such a process is recognized as challenging since there is no single report on such a sequence under Lewis acid catalysis. Herein, we report the synthesis of phosphoric esters by a Lewis acid Cu(OTf)2-catalyzed one-pot Pudovik reaction–phospha-Brook rearrangement sequence between pyridinyl-substituted aldehyde or pyridone with diarylphosphonates and -phosphinates (Scheme 1b). The present method is simple and efficient, providing an extended substrate scope that is complementary to classical similar base-prompted reactions.

We used diphenylphosphine oxide (1a) and 2-pyridinecarboxaldehyde (2a) as the standard substrates to test the suitable conditions for the O-phosphination product 3aa. Delightfully, in the presence of 10 mol % Cu(OTf)2 in toluene at 100 °C, the desired product 3aa was obtained in 62% yield, and no Pudovik adduct 4aa was detected (Table 1, entry 1). Inspired by this result, we conducted a careful screening of the other reaction factors to improve the reaction outcome. The screening of solvents was then carried out (Table 1, entries 1−5), and THF was found to be the optimal solvent. The temperature also played a pivotal role in the formation of 3aa, with traces of, or no desired 3aa being obtained at a temperature lower than 80 °C, but 4aa was produced in a high yield (Table 1, entries 7−9). When the reaction was performed at 120 °C, the yield of 3aa was slightly lower than that at 100 °C.

With the high-yielding reaction conditions established (Table 1, entry 5), we examined a series of reactions of symmetric and asymmetric secondary phosphine oxides with 2-pyridinecarboxaldehyde (2a), which produced the corresponding O-phosphination products (Scheme 2). Diarylphosphine oxide substrates with either electron-withdrawing or electron-donating groups tethered to the phenyl ring were well tolerated, and the phosphinate products 3ab–ah were obtained in moderate to good yield. The steric hindrance effect had a significant influence on the outcome of the reaction. For the phosphine oxide substrate 1i bearing an ortho-methyl-substituted phenyl group, the desired product 3ai was obtained in 21% yield, while the meta-methyl-substituted derivative 1h was converted into the corresponding product 3ah in 63% yield. In addition, the configuration of 3ak was determined by an X-ray crystallographic analysis (CCDC 2177793). To our delight, phosphorus sources containing a heterocycle, such as a benzothiophene (in 1l) or a benzofuran unit (in 1m), could smoothly be transformed into the desired products 3al and 3am, respectively, in moderate yield. Phosphinates 3an and 3ao could both be prepared under this Pudovik reaction–phospha-Brook rearrangement sequence in moderate to good yield. When the phenyl groups of the diarylphosphine oxide 1a were formally replaced by biphenyl units in 1p, 3ap was produced in 91% yield under the standard conditions. However, in the presence of bulky anthracene groups in 1q, only a 47% yield of 3aq was obtained. The applicability of the reaction system was further demonstrated with various unsymmetrically substituted phosphine oxides under the standard conditions. When the aryl group in the diarylphosphine oxide substrate was replaced by one or two alkyl groups or an ethoxy group, the transformation could also be achieved in moderate to good yield (see 3ar–au).

Next, we studied the scope with respect to the α-pyridinecarboxaldehyde by using 1a as the reaction partner (Scheme 3). Firstly, we investigated the effect of steric hindrance on the pyridine ring of the α-pyridinealdehyde. Under standard conditions, a methyl group was introduced at either the 3-, 4-, or 5- position of the α-pyridinealdehyde, and the desired products 3ba–bc were obtained in 32%, 92%, and 82%, respectively, indicating that the reaction is sensitive to steric effects. We then investigated the electronic effects of the α-pyridinealdehyde on the reaction outcome. However, no clear trend regarding electronic effects could be observed since α-pyridinealdehydes bearing either an electron-donating group (e.g., Me, MeO, Ph) or electron-withdrawing group (e.g., F, Cl, Br, CF3, CO2Me) in position 5 were all well tolerated, and the desired products were generally obtained in moderate to good yield. Delightfully, in addition to aldehydes, a ketone was also applicable under standard conditions, albeit affording the product in a comparably lower yield, probably due to the lower reactivity and steric hindrance of the substrate (see 3bl). Moreover, pyridine bearing two formaldehyde or ketone groups could also be transformed into the desired diphosphination products 3bm and 3bn in moderate to good yield. The generality of the system was further showcased by tolerating quinoline and isoquinoline groups, and the desired products 3bp and 3bq were afforded in a high yield.

Additional experiments were conducted in order to clarify the reaction mechanism. Under standard conditions, only pyridin-2-ylmethyl diphenylphosphinate (3aa) was produced, and the Pudovik adduct (hydroxy(pyridin-2-yl)methyl)diphenylphosphine oxide (4aa) was not detected (Scheme 4a). The control experiment showed that in the absence of Cu(OTf)2 catalyst, the reaction produced 4aa as the sole product in 87% yield (Scheme 4b). When 4aa was used as the substrate to carry out the phospha-Brook rearrangement under the standard conditions, phosphinate 3aa was afforded in 74% yield (Scheme 4c). Taken together all of the above results, we concluded that 4aa is the intermediate of this transformation and that Cu(OTf)2 promotes the phospha-Brook rearrangement occurring in the reaction.

Based on the above results and literature reports, the proposed mechanism is shown in Scheme 5. First, diphenylphosphine oxide (1a) and 2-pyridinecarboxaldehyde (2a) undergo the Pudovik reaction to produce the intermediate adduct 4aa. Then, Cu(OTf)2 coordinates with 4aa to form the intermediate Int-A, which goes through the phospha-Brook rearrangement process to form Int-B. Finally, Int-B is transformed into the product 3aa and releases Cu(OTf)2 to close the catalytic cycle.

In conclusion, a Lewis acid-catalyzed Pudovik reaction–phospha-Brook rearrangement sequence between diarylphosphonates or -phosphinates and α-pyridinealdehydes was developed. This approach provides an efficient approach towards phosphoric esters and provides a scope complementary to previous similar base-catalyzed transformation.

© 2022 Yang et al.; licensee Beilstein-Institut.
This is an open access article licensed under the terms of the Beilstein-Institut Open Access License Agreement (https://www.beilstein-journals.org/bjoc/terms), which is identical to the Creative Commons Attribution 4.0 International License (https://creativecommons.org/licenses/by/4.0). The reuse of material under this license requires that the author(s), source and license are credited. Third-party material in this article could be subject to other licenses (typically indicated in the credit line), and in this case, users are required to obtain permission from the license holder to reuse the material. 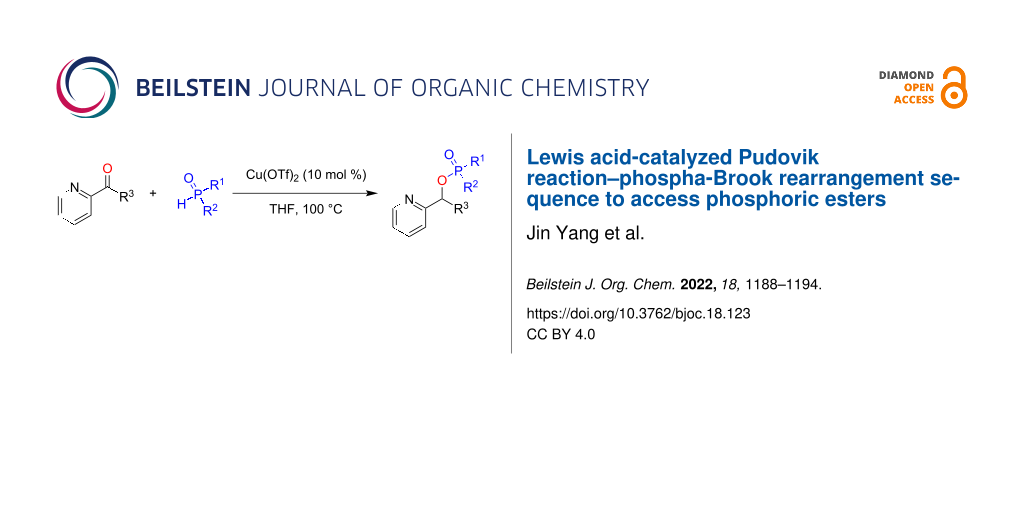