All articles from this author
Kata Tuza


All articles from this author
Giancarlo Cravotto


All articles from this author
Andrea Porcheddu


All articles from this author
Francesco Delogu


All articles from this author
Evelina Colacino

The present work focuses on the mechanochemical preparation of industrially important β-cyclodextrin (CD) derivatives. Activated CDs have been reacted with nitrogen and sulfur nucleophiles using a planetary mill equipped with stainless steel, zirconia and glass milling tools of different sizes. It is shown that the milling frequency and the number as well as the size of the milling balls have an effect on the nucleophilic reaction.

Their hollow structures make cyclodextrins (CDs) a class of carbohydrates that can form inclusion complexes with organic molecules, inorganic salts and complex metal ions [1]. Such a unique capacity makes CD derivatives crucial in a number of every-day sectors, ranging from paintings [2] to food [3]. The availability of convenient methods for their large-scale production has made CDs all but ubiquitous, including their use in a variety of investigations at the cutting edge of biological [4] and chemical science research [5]. However, there is still considerable room for the synthesis of specific CDs on the laboratory scale. This is the case, for instance, with 6I-monoamino-6I-monodeoxy-β-CD, which is easily prepared via the reduction of the parent mono-azido derivative and is used in analytical chemistry as chiral stationary phase [6]. CDs functionalized with triazole substituents can be similarly prepared through click reactions involving the azido group as a dipolarophile [7], and utilized as suitable starting material to access hydroxy functionality after derivatization [8]. Although the preparation of carbohydrate-based complexes in a ball mill has been already reported [9-11], the use of mechanical activation for the chemical derivatization of CDs has been rather sporadic [12-15]. In this respect, it is worth noting that CDs exhibit a characteristic reactivity profile. Neither traditional synthetic routes nor a conventional carbohydrate activation methodology allow for CD derivatization. The major issues stem from the differing solubility of the reagents in organic solvents, meaning that high boiling polar solvents, such as DMF or DMSO, need to be used. However, these solvents are difficult to remove and usually have considerable energy contribution. Under these circumstances, the promise shown by the mechanical processing of solids of enabling chemical transformations in the absence of solvent phases renders mechanical activation extremely appealing. This is particularly true in light of the well-known capability of mechanical treatment to induce significant enhancements in chemical reactivity.

Despite the vast amount of literature on the mechanically activated synthesis of organic molecules [16-23], CD mechanochemistry offers significant challenges. For instance, the molecular weight negatively affects the reaction design and is almost one order of magnitude higher here than for common organic molecules. The laborious preparation of the starting CD-tosylate [24,25], and the considerable reactant molecular mass differences are also elements of complexity. The mechanical processing of CDs in the absence of solvent therefore promises to simplify the work-up and allows the almost complete utilization of the CD key-intermediate [13], in comparison with the classic method [6]. Moreover, the absence of a solvent, high-boiling-point ones in particular, could prevent the undesired side-reactions, that would be caused by the decomposition of DMF (formation of dimethylamine), by hydrolysis (from residual crystal water), and by alkylation and/or oxidation (DMSO) [13], leading to cleaner reaction profiles under mechanochemical conditions. Previous work on mechanically activated substitutions on tosyl ester-activated CDs resulted in high yields of the targeted 6-monoderivatized CDs, but also in complex isolation procedures due to the large number of small balls used (50 of ø 5 mm + 1500 of ø 1 mm steel balls) [13]. Despite the longer milling times, using less balls allow outcomes to be improved [14]. This work takes the above-mentioned results as a base from which to address the mechanochemical synthesis of 6I-monoazido-6I-monodeoxy-β-CD and 6I-S-monodeoxy-6I-monothiouronium-β-CD tosylate (TU-β-CD), an important CD intermediate for the preparation of 6I-S-monodeoxy-6I-monothio-β-CD [26]. Having selected the 6I-O-monotosyl-β-CD (Ts-β-CD) as the benchmark, the nucleophilic displacement of the tosylate group in the presence of azido or thiourea (TU) nucleophiles was chosen for the study under different milling conditions. The reaction was performed in a planetary ball mill and the processing parameters were systematically varied with the aim of pointing out their influence on the nucleophilic substitution reactions in terms of rate and yield. Specifically systematic variation involved rotation speed, milling tool materials, ball number and size, ball-to-powder mass ratio, the fraction of reactor volume occupied by balls and the reactor volume itself.

We previously reported [13] a successful scale-up monoazidation reaction of Ts-β-CD (the reaction scale was 6.5 g, 5 mmol) in a ball-mill (Supporting Information File 1, Table S1, entries 1–4). Considering that the preparation of Ts-β-CD is laborious [24,25], its commercial availability is restricted by high costs and limited number of producers, the systematic investigation on the influence of the milling parameters on the reaction outcome was investigated using a reaction scale of dominantly 1 mmol of substrate, in the presence of 3 equivalents of NaN3 or thiourea (TU) as nucleophiles (Scheme 1). Being the removal of the starting Ts-β-CD from the 6-monoazido-β-CD complicated due to the solubility similarities, the time to reach complete conversion (> 99.5%, defined as milling time) of the starting material had been targeted as main control parameter (see details in Supporting Information File 1).

No significant role can be ascribed to the temperature, since systematic measurements under different processing conditions indicated that it never exceeded 72 °C. Further, no degradation of the activated Ts-β-CD was observed.

The yield of the mechanically induced azidation is invariably higher than the one observed in our previous work [13]. However, the rate of the reaction involving the more nucleophilic TU is considerably lower. Chemical conversion data regarding the reactions performed under different milling conditions are summarized in Table S1 (Supporting Information File 1). It can be seen that the reaction yield shows significant scatter. No definite relationship between the set of processing parameters and the yield can be identified. Nevertheless, sets of balls with different size seemingly assure the best performances in terms of yield and reaction rate, enabling full substrate conversion in shorter reaction times (Supporting Information File 1, Table S1, entries 2, 6, 11, and 12).

The observed yield enhancement can be tentatively related to the effectiveness of energy transfer, which can be expected to increase as the volume occupied by balls inside the reactor increases, thus allowing milling conditions to approach frictional regimes.

Further support for the hypothesis that the higher number of impacts among balls per unit of time enhances the outcome of the reaction comes from data shown in Figure 2a and Supporting Information File 1, Table S1 entries 6 and 7. The data in Figure 2 refer to experiments performed varying the ball size while keeping the total volume occupied by balls approximately constant. Under these circumstances, the number of contacts between balls increases as the ball size decreases. Based on the above-mentioned hypothesis, reaction rate should be expected to increase. In line with expectations [18], the experimental findings indicate that the smaller the ball size, the shorter the reaction time for both nucleophiles.

However, from the experiments the highest sun wheel speed at 650 min−1 resulted in faster reaction (Figure 2a) and the number of balls seemed to have less influence on the investigated reaction. It is assumed that a combination of the kinetic energies of the individual balls and the number of impacts can play an important role in the reaction rate.

In another set of experiments, for the same nucleophile, comparative experiments were performed using a total number of glass balls having the same weight (1.8 g) of 60 steel balls of 1 mm ø (Figure 3a and Supporting Information File 1, Table S1, entries 20/22 for NaN3 and 21/23 for TU).

Finally, the experimental findings collected in Supporting Information File 1, Table S1 show that for a larger volume occupied by balls inside the reactor, faster reactions were observed, independent of the material that the milling tools were made from.

Mechanical activation in a planetary ball mill allows the studied reactions to take place at a rate higher than the corresponding reactions in solution. Indeed, the nucleophilic substitution of tosyl groups is very slow at T < 80 °C (in DMF), while in water (at 50–70 °C) the most competitive side reaction is the hydrolysis of the starting material. Moreover, mechanochemical activation allowed solve one of the major problems for cyclodextrin derivatization in solution. This is usually related to the very different solubilities of the reagents, thus requiring energy transfer by heating to induce reactions. Although it is difficult to reach a compromise between the reaction and side reactions, without a massive energy transfer the derivatizations are rarely successful in solution. By mechanochemistry, the reactivity is mainly affected by the sun wheel speed and the number and size of balls for both nitrogen and sulfur nucleophiles. In general, reaction rates reach a maximum as the volume fraction occupied by balls inside the reactor increases and the ball size decreases but no simple correlation was found. Consequently, it seems reasonable to connect reaction yield and rate with the total number of contact between balls. Unlike the reactivity in solution, under mechanochemical conditions the sulfur nucleophile (thiourea, TU) was less effective than the azide ion in the substitution reaction. A similar reversal of reactivity has been already observed for halogens [12,13,28]. The experimental findings lend support to the idea that mechanical activation can induce chemical reactivity [29] and selectivity [30] which is different to that observed in solution, which can be further complicated by the inclusion complex formation property of cyclodextrins.

How exactly the milling parameters influence the kinetics and the mechanisms of organic reactions is still question of investigation in the scientific community. Even though our contribution tries to delineate some trends, additional investigations and experiments need to be performed for a fully understanding of this still understudied and poorly understood aspect of mechanochemistry.

Reaction of oxiranes with cyclodextrins under high-energy ball-milling conditions

© 2017 Jicsinszky et al.; licensee Beilstein-Institut.
This is an Open Access article under the terms of the Creative Commons Attribution License (http://creativecommons.org/licenses/by/4.0), which permits unrestricted use, distribution, and reproduction in any medium, provided the original work is properly cited.
The license is subject to the Beilstein Journal of Organic Chemistry terms and conditions: (http://www.beilstein-journals.org/bjoc) 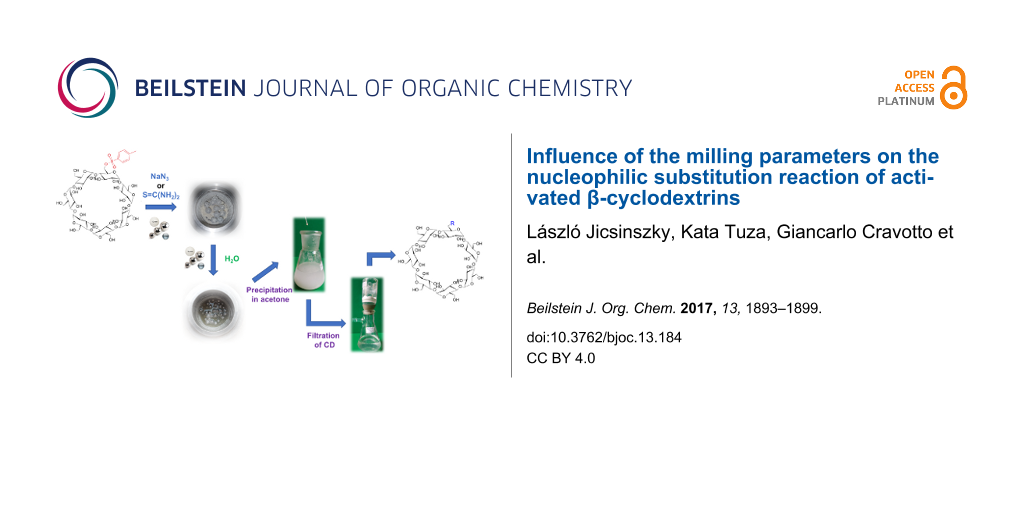