All articles from this author
Claney L. Pereira

1,3-Dibromo-5,5-dimethylhydantoin (DBDMH), an inexpensive, non-toxic and stable reagent, is a competent activator of thioglycosides for glycosidic bond formation. Excellent yields were obtained when triflic acid (TfOH) or trimethylsilyl trifluoromethanesulfonate (TMSOTf) were employed as co-promoters in solution or automated glycan assembly on solid phase.

Thioglycosides are versatile glycosylating agents that are commonly used in oligosaccharide synthesis due to their accessibility, stability, compatibility with various reaction conditions, and orthogonality to other donors [1-5]. Different electrophilic/thiophilic reagents have been developed as promoters to activate thioglycoside donors [3,6-18]. However, most of those activators are expensive and toxic [5,17,19]. Poor solubility complicates the use of some promoters during automated glycan assembly [20-23], while the instability of some activators in solution requires them to be freshly prepared prior to use [24-26]. Here, we describe a promoter system based on the commercially available, inexpensive 1,3-dibromo-5,5-dimethylhydantoin (DBDMH) for the activation of thioglycosides.

DBDMH, a white to pale-brown powder that is readily soluble in most organic solvents, including dichloromethane, is sold under the trade name Brom-55 and used as swimming pool sanitizer, as industrial brominating agent for ethylene propylene diene monomer rubber to improve ozone resistance, as additive in plastics to promote photodegradation and as a fungicide to preserve fresh fruits [27]. In synthetic chemistry, DBDMH acts as a thiophilic activator in the conversion of dithioacetals to the corresponding O,O-acetals [28-30], as well as in the synthesis of heparin mimetics [31]. We considered DBDMH as a readily available alternative promoter for glycosylations involving thioglycosides.

Initially, the capability of DBDMH to activate thioglycoside 1 [32] in order to glycosylate the primary hydroxy group present in D-glucose acceptor 2 [33] was explored without any additives (Table 1, entry 1). This initial experiment furnished disaccharide 3, albeit in modest yield (43%). When TfOH or TMSOTf (10 mol %) were added as co-promoter, the yield increased to more than 90% (Table 1, entries 2 and 3). Next, the amount of the reagent required for activation was studied (Table 1, entries 3–5). Substoichiometric amounts of DBDMH (0.7 equiv) in the presence of co-promoter suffice to produce the disaccharide efficiently. The DBDMH/TfOH activation system is temperature insensitive as it furnishes the product from −78 °C to room temperature, although most disaccharide 3 is formed at −40 °C (Table 1, entries 3 and 6–9).

Next, the scope of the new activation system was investigated by using a variety of glycosyl donors 4–10 [34-38] containing C-2 participating groups to ensure 1,2-trans-glycoside formation (Table 2). Each glycosylating agent was reacted with D-glucose acceptors 2 (Table 2, entries 1–8) and 11 [39] (Table 2, entries 9–16) with a free hydroxy group at C-6 and C-4 position, respectively. The DBDMH/TfOH system activates glycosyl donors including neutral monosaccharides of different configurations (D-gluco 5 and 6, D-galacto 1 and 4, D-manno 8, L-rhamno 9), amino sugar 7 and uronic acid 10. All thioglycosides reacted equally well, irrespective of their aglycons (SEt or STol). This promoter is compatible with most commonly used protecting groups, except some electron-rich groups like 4-methoxybenzyl ethers that may be partly brominated under these conditions [40].

aAll reactions were carried out at −40 °C in dichloromethane with 0.7 equiv DBDMH and 10 mol % TfOH as promoter. bOnly isolated yields are reported.

To probe the scope of DBDMH/TfOH-mediated 1,2-cis-glycosylation, perbenzylated galactosyl donor 12 [41] (Table 3, entries 1–4) and galactosyl donor 13 [42] (Table 3, entries 5 and 6) as well as glucosyl donor 14 (Table 3, entries 7 and 8) were reacted with acceptor 2 in the presence of DBDMH. Electron-rich (‘armed’) thioglycosides [43] are more readily activated as the reaction of perbenzylated donor 12 in dichloromethane at −78 °C afforded the disaccharide with excellent yield but low stereoselectivity. The α/β ratio, determined by supercritical fluid chromatography (SFC), shifted significantly toward the α-isomer with ether [44] and toward the β-isomer when acetonitrile [45] was used as co-solvent. With all these donors, the α-stereoselectivity increased at higher temperature [46]. Donor 13, containing a remote participating group, produced the disaccharide with better α-selectivity [22,42].

aAll reactions were carried out with 0.7 equiv DBDMH and 10 mol % TfOH as promoter. bOnly isolated yields are reported. cSilica-2EP analytical column was used to determine the α/β ratio when using SFC. Isopropanol was used as co-solvent for the mobile phase. dThe ratio of solvents is 2:1 (v/v).

Automated glycan assembly is the most rapid means to access complex oligosaccharides [20,47]. Ideally, stable and non-toxic reagents should be used on such instruments. The automated synthesis of disaccharide 16 served to assess the suitability of the DBDMH/TMSOTf activation system using functionalized resin 15 [48] as solid support (Scheme 1). After two coupling cycles with building block 8 followed by UV-cleavage, disaccharide 16 was obtained in 63% isolated yield.

Moreover, DBDMH performs as well as N-iodosuccinimide (NIS) in activating phenyl selenoglycoside 17 in the presence of water to furnish hemiacetal 18 en route to glycosyl imidate 19 (Scheme 2).

The inexpensive reagent DBDMH has been demonstrated to be a powerful promoter for the activation of thioglycosides. This promoter is readily available, highly soluble, and shelf-stable. A variety of substrates containing diverse protecting groups have been investigated with promising results, while the stereoselectivity of the reactions follows reported trends. This promoter system was successfully used for automated glycan assembly.

A. Michael Downey and Michal Hocek

© 2017 Xu et al.; licensee Beilstein-Institut.
This is an Open Access article under the terms of the Creative Commons Attribution License (http://creativecommons.org/licenses/by/4.0), which permits unrestricted use, distribution, and reproduction in any medium, provided the original work is properly cited.
The license is subject to the Beilstein Journal of Organic Chemistry terms and conditions: (http://www.beilstein-journals.org/bjoc) 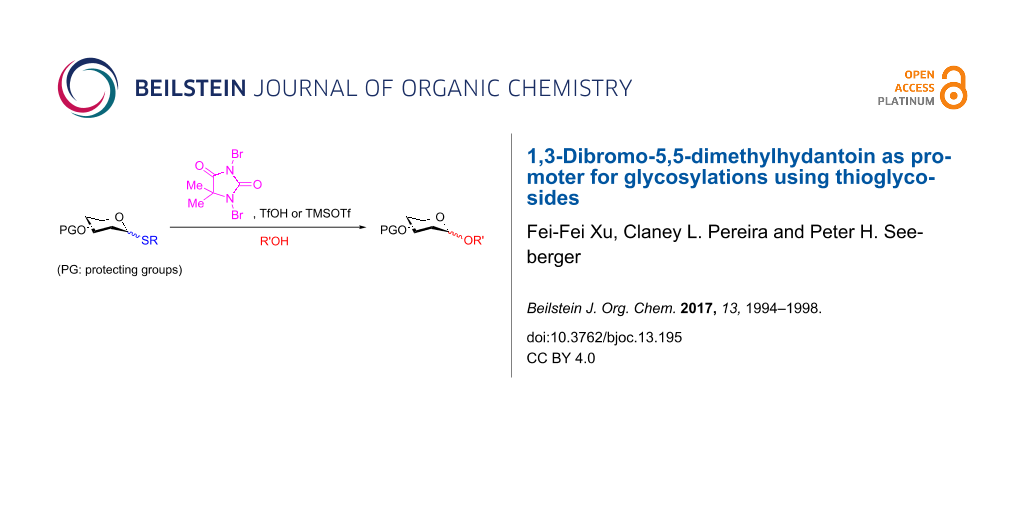