Herein the nucleophilic addition of Se-(trifluoromethyl) 4-methylbenzenesulfonoselenoate, a stable and easy-to-handle reagent, to alkynes is described. This reaction provides trifluoromethylselenylated vinyl sulfones with good results and the method was extended also to higher fluorinated homologs. The obtained compounds are valuable building blocks for further syntheses of fluoroalkylselenolated molecules.

Over the last decades, fluorinated compounds have been the subject of growing interest [1,2]. The specific properties introduced by fluorinated groups have contributed to the “success story” of fluorinated molecules. Nowadays, fluorinated compounds find applications in various fields, from life sciences to materials [3-15]. In the objective to design new molecules with specific properties, novel fluorinated substituents have been developed, such as diverse trifluoromethylchalcogeno groups, due to their particular electronic properties [16] and, more especially, to their high lipophilicity [17]. Whereas the CF3O and CF3S substituents have been largely studied [18-23], the CF3Se group, albeit known, has gained only little attention until recently. However, selenylated derivatives present pertinent properties and have found some interest in materials [24], life sciences [25-33] and drug design [34-37]. Furthermore, very recently, the Hansch lipophilicity parameter of CF3Se has been determined (πR = 1.29) – a high value lying between that of CF3O and CF3S [38]. Consequently, trifluoromethylselenolated molecules could represent interesting alternatives in the modulation of properties for various applications.

Despite such potential interest for CF3Se compounds, methods to their syntheses remain still limited [39]. Direct trifluoromethylselenolation reactions have recently gained renewed interest and mainly follow two strategies. The nucleophilic approach is based on the use of the CF3Se− anion which must be prepared from stoichiometric amounts of metallic selenium [40-53]. Concerning the electrophilic approach, two reagents, that are easy to obtain, have been described: CF3SeCl [38,54-67] and CF3SeTs [68].

Recently, we have described the electrophilic addition of CF3SeCl to alkenes to access α-chloro-β-trifluoromethylselenolated molecules [65]. These products are particularly interesting because the presence of the chlorine substituent opens the way to post-functionalization and thereby to syntheses of more elaborated compounds. However, the similar reaction with alkynes has failed and only a complex mixture was observed which is basically due to the high reactivity of CF3SeCl.

To our delight, the addition of 1a to phenylacetylene (2a) at room temperature, without any other practical precautions, lead to the expected addition product 3a with good yield (Scheme 1).

Subsequently, the reaction was extended to various arylalkynes and afforded, in general, good yields. Satisfactory to excellent results were observed whatever the electronic character (donor or acceptor) of the substituents on the phenyl moiety were. Even highly electron-withdrawing groups led to satisfactory yields of the products 3h–j. The reaction is also not too sensitive to steric hindrance because good results were obtained also with ortho-substituted substrates 3c,e,i. Nevertheless, the reaction with aliphatic alkyne 2k, resulted in a low yield (28%).

The reaction is stereoselective with the exclusive formation of the trans-isomers. Further, a high regioselectivity is observed but, surprisingly, the anti-Markovnikov regioisomers were obtained. The stereochemistry and regiochemistry were confirmed thanks to the X-ray structure of compound 3a (Figure 1).

From a mechanistic point of view, the reaction starts certainly with the intermediate formation of the trifluoromethylselenonium ion I. This is in accordance with the observed trans-selectivity due to the anti opening of I by the toluenesulfinate anion. The regioselectivity could be rationalized by the steric hindrance between the aromatic moiety and the large nucleophile (toluenesulfinate anion) which favors the attack on the less hindered side (Scheme 2, pathway a). Such sensitivity to steric hindrance of I was confirmed by the lack of reactions observed with internal alkynes.

Higher homologs of reagent 1a are also available, the reaction was briefly performed with 1b and 1c (Scheme 3). The expected products were obtained with good yields. The tridecafluorohexylselenyl group in product 5a makes this compound interesting because it opens the way to applications in the design of fluorinated polymers or surfactants.

Typical procedure: To a flask equipped with a magnetic stir bar were added 1 (0.25 mmol, 1.1 equiv), alkyne 2 (0.23 mmol, 1.0 equiv), and anhydrous THF (1 mL). The reaction was stirred at 25 °C for 15–18 hours (conversion was checked by 19F NMR with PhOCF3 as internal standard). The crude residue was purified by chromatography to afford the desired products 3–5.

Clément Ghiazza holds a doctoral fellowship from la Région Rhône Alpes. The authors are grateful to the CNRS and the French Ministry of Research for financial support. The French Fluorine Network is also acknowledged for its support. We thank Dr. Erwann Jeanneau (Centre de Diffractométrie Henri Longchambon) for collecting the crystallographic data and solving the structure of 3a.

© 2017 Ghiazza et al.; licensee Beilstein-Institut.
This is an Open Access article under the terms of the Creative Commons Attribution License (http://creativecommons.org/licenses/by/4.0), which permits unrestricted use, distribution, and reproduction in any medium, provided the original work is properly cited.
The license is subject to the Beilstein Journal of Organic Chemistry terms and conditions: (http://www.beilstein-journals.org/bjoc) 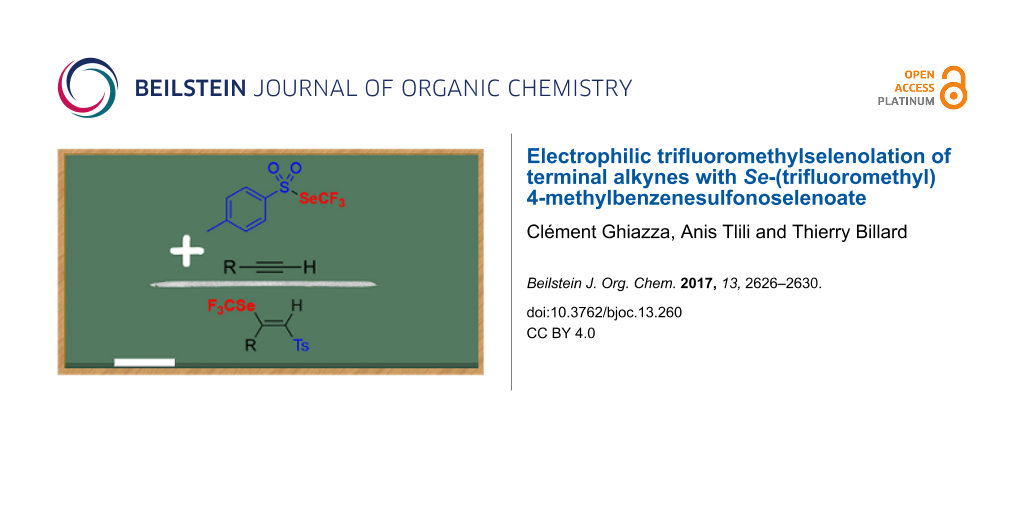