All articles from this author
Thomas J. Wenzel

This article is part of the Thematic Series "Superstructures with cyclodextrins: Chemistry and applications IV".

Chiral NMR solvating agents are commonly used for determining enantiomeric purity. In some cases, these compounds cause reproducible perturbations in chemical shifts that can be used in the assignment of the absolute stereochemistry [1-7]. Since chiral solvating agents associate with the compound being studied through non-covalent interactions, they are easy to use and involve merely mixing the reagent with the compound in an NMR tube.

Cyclodextrins (CDs), which are cyclic oligosaccharides containing D-glucose units, represent an important and versatile class of chiral NMR solvating agents (Figure 1). The most common representatives are α-, β- and γ-CD, which contain six, seven and eight glucose rings, respectively. Many substrates form inclusion complexes with CDs and the differing sizes of α-, β- and γ-CD allow the study of substrates of different sizes. Furthermore, the secondary hydroxy groups at the 2 and 3-positions and the primary hydroxy groups at the 6-position of CDs can be derivatized with a variety of functional groups. Such derivatization can be used to alter the solubility, binding properties of substrates, and ultimately enantioselectivity properties of the CDs. The cavity of CDs has the secondary hydroxy groups at one opening and the primary ones at the other and the opening to the cavity at the secondary side is larger than that at the primary side.

Native, underivatized CDs are effective chiral NMR solvating agents in water [8,9]. Water-soluble substrates with hydrophobic moieties such as aryl rings typically form inclusion complexes by insertion of the aryl ring into the CD cavity. Neutral CDs with permethylated [10-12], benzylated [13], benzoylated [13,14], carbamoylated [15-18], and acetylated [19,20] hydroxy groups have been studied in NMR applications. The permethylated CDs can be used in both aqueous and organic solvents whereas the other neutral derivatives are typically useful in organic solvents such as chloroform-d. In addition to the aforementioned modifications, the hydroxy groups of CDs can also be derivatized with ionic substituents. CDs with anionic carboxymethyl [21-32] (CM-CD, Figure 1), sulfate [29,30,33-35], sulfobutylether [22-24,36,37] and thiocarboxymethyl [38] groups also have been studied as chiral NMR solvating agents. The general findings of these studies are that anionic CDs are more effective chiral NMR solvating agents for cationic substrates than neutral native CDs. Similarly cationic CDs containing amine [39,40], xylylenediamine [41], and trialkylammonium groups [42-44] are found to be more effective for anionic substrates than the neutral native CDs.

An important consideration with derivatized CDs is the degree of substitution (DS) of the hydroxy groups. When preparing ionic CD derivatives, it is often difficult if not impossible to derivatize all of the hydroxy groups. Whether the functionalization takes place preferentially at the primary or secondary hydroxy groups can have a significant impact on the enantioselectivity of the resulting derivative. Carboxymethyl- and trimethylammonio-substituted CDs are commercially available but often have a low DS of about 2. Previous reports have found that randomly substituted ionic CDs with higher degrees of carboxymethylation and trimethylammonium groups (DS = 11 for β-CD) [21,43] are considerably more effective than derivatives with lower DS. Unfortunately, CM-CDs with high DS are not commercially available and investigators wishing to use these compounds in chiral NMR applications would have to synthesize and purify them.

Phosphated CD derivatives (P-CDs, Figure 1) have been utilized as effective enantioselectors in capillary electrophoresis [45-48]. Various phosphated α-, β- and γ-CD are commercially available with different degrees of substitutions from low (2–6) to high DS (6–10). This report will describe the utilization of P-CDs as water-soluble chiral NMR solvating agents. Thirty-three cationic substrates with a wide range of structural features are examined and enantiomeric differentiation obtained with P-CDs is compared to prior results acquired with CM-CDs.

All substrates, except for 14, have aromatic rings in their structures. Previous studies [21,31,32] and observations made herein with the P-CDs indicate that host–guest complexes through insertion of the aryl ring into the cavity of the CDs occur which is supported by NMR measurements. In the NMR spectra the resonances of the P-CD H3 and H5 protons, which are located inside the CD cavity, are perturbed to lower frequencies in the spectra due to shielding of these protons by the inserted aryl ring. The largest magnitude of enantiomeric differentiation observed in the 1H NMR spectra of the substrates with each P-CD at 5, 10 or 20 mM (P-α-CD-LDS, DS = 2–6; P-α-CD-HDS, DS = 6–10; P-β-CD-LDS, DS = 2–6; P-β-CD-HDS, DS = 6–10; P-γ-CD-LDS, DS = 2–6; P-γ-CD-HDS, DS = 6–10) is reported herein.

Equation 1 and Equation 2 show the association of the (R)- and (S)-enantiomers of a substrate (Sub) with a chiral solvating agent (CSA).

In cases where enantiomeric differentiation occurs through the formation of diastereomeric CD–substrate complexes, best results in the NMR spectrum would be expected at 20 mM P-CD because of a higher degree of complexation. However, in some spectra there have been an overlap of one of the substrate resonances with other resonances of the substrate or CD in such a way that it was not possible to determine in a regular one-dimensional NMR spectrum whether enantiomeric differentiation was present.

In some cases, mixing praseodymium(III) or ytterbium(III) nitrate with the P-CD resulted in the formation of a precipitate. In those cases where the addition of lanthanide(III) nitrates to P-CD–substrate mixtures did not result in the formation of a precipitate, the spectra were often broadened. One reason for the broadening may be caused by the slower exchange within the larger ternary lanthanide–P-CD–substrate complex. Another is because the paramagnetic species shortens the relaxation time of the excited nuclei causing uncertainty broadening.

One example where the addition of a lanthanide ion did produce a large enhancement in enantiomeric differentiation is shown in Figure 5 for the N-methyl resonance of 7. The series of spectra in Figure 5 is for a mixture of 7 (10 mM) and P-β-CD-LDS (20 mM) with increasing concentrations of ytterbium(III) nitrate. The N-methyl resonance of 7 with only P-β-CD-LDS shown in Figure 5a exhibits a small degree of enantiomeric differentiation (0.008 ppm). The mixture with ytterbium(III) at 16 mM exhibits an enantiomeric differentiation of 0.109 ppm. An interesting observation is that the resonance of the (1S,2R)-enantiomer is more shielded on the addition of ytterbium(III) whereas the resonance of the (1R,2S)-enantiomer is deshielded. The equation that predicts the magnitude of the through-space shifts caused by a lanthanide ion has an angle term that can be either positive or negative depending on the geometry of the complex and the position of a nucleus relative to the principle magnetic axis of the complex. In all likelihood, the behavior seen in the spectra in Figure 5 reflects differences in the sign of this angle term for the two enantiomers [31,32].

Sodium salts of phosphated α-, β- and γ-cyclodextrin with low (2–6) and high DS (6–10) were obtained from CarboMer Inc., San Diego, California. The P-CDs were refrigerated between 2–8 °C until use as recommended by the manufacturer. Substrates were obtained from commercial sources either as hydrochloride salts or neutral compounds. Neutral substrates were converted to their hydrochloride salts in deuterium oxide (D2O) by adding a slight excess of deuterium chloride (DCl).

Stock solutions of the P-α-CDs (40 mM), P-γ-CDs (40 mM) and cationic substrates (20 mM), which were enriched in one enantiomer when available, were prepared in D2O. P-CD and substrate solutions were kept at ambient temperature. Appropriate aliquots of P-α or P-γ-CD, substrate, and D2O were combined in NMR tubes to obtain a 600 μL solution of 20, 10, or 5 mM P-CD and 10 mM substrate. The P-β-CDs were not soluble in D2O at 40 mM and 20 mM stock solutions were used in preparing P-β-CD samples at 5 and 10 mM. An appropriate amount of the P-β-CD was weighed for 20 mM solutions.

© 2017 Puentes and Wenzel; licensee Beilstein-Institut.
This is an Open Access article under the terms of the Creative Commons Attribution License (http://creativecommons.org/licenses/by/4.0), which permits unrestricted use, distribution, and reproduction in any medium, provided the original work is properly cited.
The license is subject to the Beilstein Journal of Organic Chemistry terms and conditions: (http://www.beilstein-journals.org/bjoc) 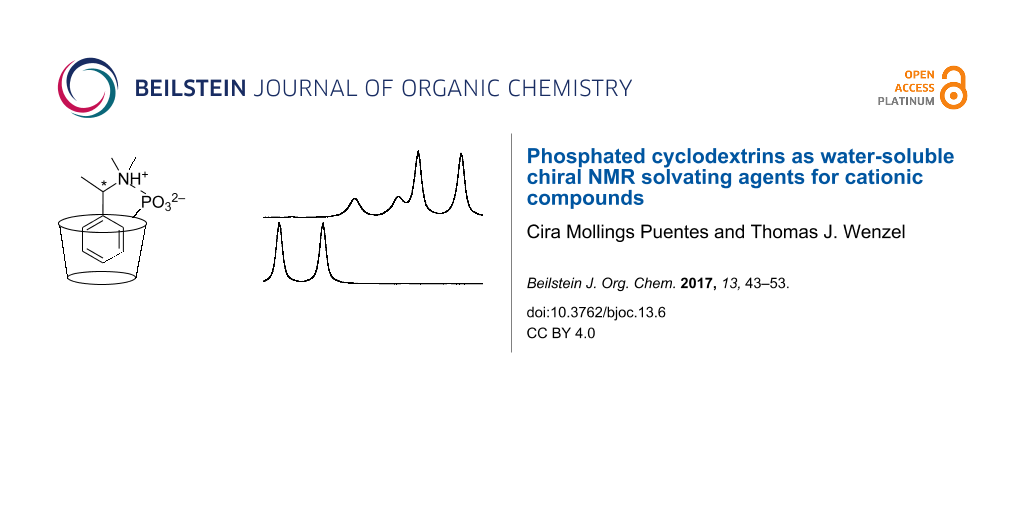