All articles from this author
Norihiko Sasaki


All articles from this author
Kei Kitamura


All articles from this author
Shuji Takahashi


All articles from this author
Sujit Manmode


All articles from this author
Naoko Takeda-Okuda


All articles from this author
Jun-ichi Tamura


All articles from this author
Toshiki Nokami


All articles from this author
Toshiyuki Itoh

This article is part of the Thematic Series "Biomolecular systems" and is dedicated to Professor Peter H. Seeberger on the occasion of his 50th birthday.

Degradation of chitin into oligoglucosamines and glucosamine is an important biological process and at least several enzymes such as chitinases and glucosaminidases are involved. Various types of inhibitors such as PUGNAc [1], nagastatin [2], NAG-thiazoline (NGT) [3], and pochonicine [4], have already been developed. These compounds have exhibited strong inhibition activity; however, they have a broad spectrum toward enzymes of various species including animals (Figure 1). N,N,N-Trimethyl-D-glucosaminyl (TMG)-chitotriomycin (1) was isolated from Streptomyces anulatus by Kanzaki [5-7] and the first total synthesis was completed by Yu [8,9]. Although the activity of TMG-chitotriomycin (1) was moderate, it selectively inhibits glucosaminidases derived from insects and fungi. Therefore, TMG-chitotriomycin (1) has a potential as a lead compound for safe insecticides and pesticides. Recently, the total synthesis of TMG-chitotriomycin (1) initiated from building blocks that were prepared by the degradation of chitin has been reported by Beau [10]; however, practical synthetic methods to provide TMG-chitotriomycin (1) and its derivative in preparative scale are still highly desirable.

To synthesize the potential precursor 7 of TMG-chitotriomycin (1) stereoselectively, we initiated our study by optimization of the reaction conditions of the first glycosylation using 2-deoxy-2-azidothioglycoside 2 as a glycosyl donor. The azido group at the C2-position is a well-known substituent, which facilitates the formation of an α-glycosidic linkage selectively due to the lack of neighboring group participation [27]. 4-Fluorophenyl 3,4,6-tri-O-acetyl-2-deoxy-2-azido-β-D-thioglucoside (2a) afforded the corresponding disaccharide α-isomer 5aα exclusively by the reaction with building block 4 via the glycosyl triflate intermediate 3a (Scheme 1). On the other hand, 4-fluorophenyl 3,4,6-tri-O- benzyl-2-deoxy-2-azido-β-D-thioglucoside (2b) gave the disaccharide β-isomer 5bβ as the major product. Although the disaccharide α- and β-isomers of 5b (5bα/5bβ) have the same retention factor (Rf) in thin-layer chromatography (TLC, Rf = 0.40, hexane/EtOAc 5:2 as an eluent), the pure β-disaccharide isomer 5bβ was obtained as colorless crystals after careful separation by silica gel chromatography.

Next, we attempted to synthesize the potential precursor 7 of TMG-chitotriomycin (1) using disaccharide 5bβ as a building block as illustrated in Figure 3. The automated electrochemical assembly of building blocks was initiated by the anodic oxidation of 5bβ and the subsequent coupling with thioglycoside 4 afforded the corresponding trisaccharide 6 as an intermediate after the 1st cycle. The same process was repeated automatically in the 2nd cycle and target tetrasaccharide 7 was obtained in 41% yield after purification by preparative gel permeation chromatography (GPC).

Deprotection and introduction of the TMG part to tetrasaccharide 7 were achieved by following the procedure reported by Yu and co-workers (Figure 4) [8]. Phthaloyl groups and acetyl groups of 7 are removed by the reaction with ethylenediamine followed by applying the conventional acetylation protocol with acetic anhydride (Ac2O) in the presence of N,N-dimethylaminopyridine (DMAP) to convert the amino groups into acetamide groups and to protect the hydroxy groups as acetyl groups. The 2-azido group of tetrasaccharide 8 was then reduced to a 2-amino group with 1,3-propanedithiol. Thus-obtained tetrasaccharide was treated with iodomethane (MeI) and N,N-diisopropylethylamine (iPr2NEt) to prepare the TMG part of tetrasaccharide 9. Deprotection of acetyl groups at the 3-O-positions and the subsequent global deprotection of the benzyl groups and the anomeric thioaryl group of the tetrasaccharide by hydrogenation with hydrogen gas in the presence of a palladium catalyst afforded TMG-chitotriomycin (1) in 21% yield (10 steps from disaccharide 5bβ) [31].

All materials including solvents were purchased and used without further purification. Carbohydrate building blocks 2a, 2b, and 4 were prepared according to an previous report [11].

The H-type glass cell equipped with glass filter was dried under vacuum and then filled with argon gas. Disaccharide building block 5bβ (0.43 mmol, 436 mg) was placed in the anodic chamber together with Bu4NOTf (1.7 mmol, 672 mg) and anhydrous dichloromethane (16 mL). In the cathodic chamber Bu4NOTf (1.7 mmol, 676 mg) and anhydrous dichloromethane (16 mL) was placed with TfOH (1 mmol, 90 μL). The automated synthesis was started immediately after the cooling bath temperature reached −80 °C. The anodic oxidation (1.05 F/mol, 10 mA) takes 73 minutes and then a dichloromethane solution containing building block 4 (0.43 mmol, 1.0 mL) was added by a syringe pump. After addition of the building block, the temperature of the cooling bath was raised to −60 °C and the reaction mixture was stirred for 1 h at this temperature. Then the temperature of the cooling bath was cooled again at −80 °C to start the 2nd cycle. It takes about 326 minutes (ca. 5 h 30 min) to complete the automated assembly of building blocks. The reaction was quenched with Et3N (0.5 mL) at −80 °C and the cell was taken from the cooling bath. The reaction mixture of the anodic chamber was evaporated and the thus-obtained crude product was purified by silica gel chromatography (hexane/EtOAc 1:1 as eluent). The precursor 7 was obtained in 49% yield (411 mg) together with building block 4 as an impurity. Further purification by GPC (CHCl3 as eluent) afforded 7 in 41% yield (328 mg, 0.178 mmol).

This work is financially supported by JSPS Grant-in-Aid for Scientific Research on Innovative Areas (No. 2707) “Middle Molecular Strategy” Grant Number JP15H05844. T. N. thanks discretionary funds of the president of Tottori University.

© 2017 Isoda et al.; licensee Beilstein-Institut.
This is an Open Access article under the terms of the Creative Commons Attribution License (http://creativecommons.org/licenses/by/4.0), which permits unrestricted use, distribution, and reproduction in any medium, provided the original work is properly cited.
The license is subject to the Beilstein Journal of Organic Chemistry terms and conditions: (http://www.beilstein-journals.org/bjoc) 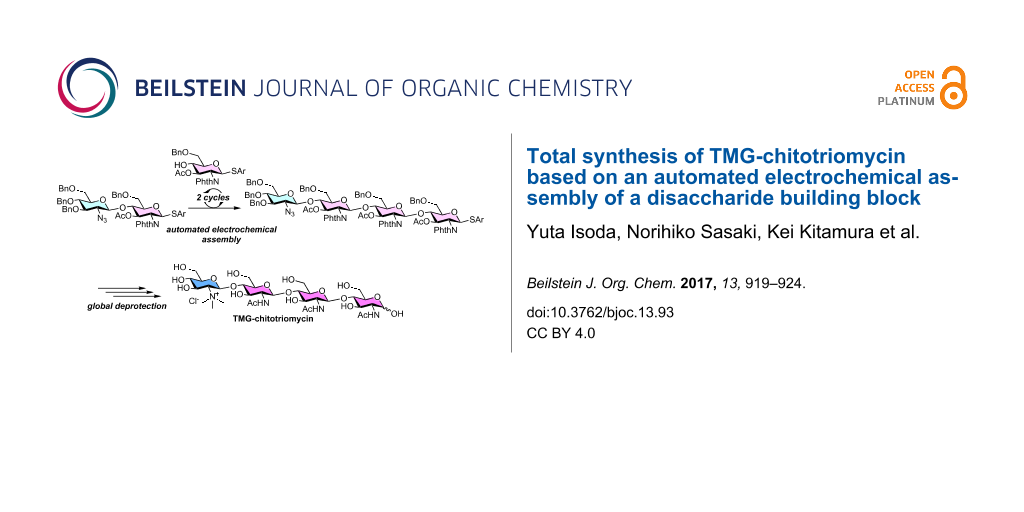