All articles from this author
Tomoya Akagi


All articles from this author
Atsuhiro Yamashita


All articles from this author
Masahiro Haisa


All articles from this author
Kazuki Yoshioka


All articles from this author
Hiroki Mandai


All articles from this author
Christian Hempel

In this study, six-membered N-acyliminium ions were generated by the “indirect cation pool” method and reacted with several nucleophiles. These reactions afforded disubstituted piperidine derivatives with high diastereoselectivities and good to excellent yields. The conformations of the obtained N-acyliminium ions were studied by low temperature NMR analyses and DFT calculations and were found to be consistent with the Steven’s hypothesis.

Cyclic amines are significant key motifs in pharmaceutical and natural products because a variety of compounds bearing those moieties exhibit physiological and pharmacological activities [1-3]. As many of these compounds feature asymmetric carbon atoms at the α-position of the cyclic amine, the stereoselective carbon–carbon bond formation at this position is of great importance from the perspective of drug discovery [4,5]. Meanwhile the “cation pool” method can realize the generation and accumulation of highly reactive cationic species such as N-acyliminium ions in relatively high concentrations by low temperature electrolysis [6-10]. The N-acyliminium ions thus generated can directly react with a variety of carbon nucleophiles to very efficiently yield carbon–carbon bond-formation products. In addition, this research lead to the development of an indirect cation pool method that enables the creation of the cation pool by reacting a cation precursor having a C–S bond with an electrochemically generated ArS(ArSSAr)+ as the cation-generating reagent. For example, a pool of alkoxycarbenium ions can be rapidly generated by the reaction of thioacetals and ArS(ArSSAr)+ (Ar = p-FC6H4, Scheme 1) [11].

The cation pool method is advantageous over the conventional Lewis acid promoted generation of carbocation species because the reactive cationic species can be detected by spectroscopy such as NMR and IR measurements. For this research, the reaction of six-membered N-acyliminium ions having a substituent in the 4-, 5-, or 6-position were generated by the indirect cation pool method and examined in the reaction with several nucleophiles to give the disubstituted piperidine derivatives in an excellent diastereoselective manner (Scheme 1). This result inspired us to investigate the stereochemistry of the N-acyliminium ions by means of NMR spectroscopy, which is challenging to achieve without using cation pool methods. The current report presents the diastereoselective synthesis of disubstituted piperidine derivatives by the indirect cation pool method and the elucidation of the stereoselectivity based on both NMR analyses of the cyclic N-acyliminium ions and DFT calculations.

N-Acyliminium ions obtained from N-Boc-piperidines are attractive intermediates because they easily can be transformed to a variety of alkaloids having a piperidine skeleton. In our preliminary study, we found the indirect cation pool method suitable for the generation and accumulation of N-acyliminium ions. Therefore, the reaction of N-Boc-4-phenyl-2,3,4,5-tetrahydropyridin-1-ium (C1) derived from precursor 1a and ArS(ArSSAr)+ (Ar = p-FC6H4) generated by the low temperature electrolysis was first performed with several nucleophiles (Table 1). The starting 1a and other N-acyliminium ion precursors were synthesized by the modified Beak’s protocol [12] (see Supporting Information File 1). As observed in our previous studies, the Boc protecting group was found not suitable for the direct cation pool method due to its cleavage by protic acid generated during the electrolysis of the cation precursor. However, it can be utilized in the indirect cation pool method as diaryldisulfides are the exclusive side products formed during carbocation generation. Thus, the reaction of acyliminium ion C1 with Me3Al afforded trans-1-(tert-butoxycarbonyl)-2-methyl-4-phenylpiperidine (2aa) in a good yield and virtually complete diastereoselectivity (cis/trans = <1:99). Similarly, the reaction of C1 with diethylzinc or allyltributylstannane gave piperidine derivatives 2ab and 2ac with high yields and trans-selectivity (Table 1, entries 2 and 3). Also, the introduction of phenyl or cyano groups in the piperidine core proceeded in a highly regioselective manner and good to high yields (Table 1, entries 4 and 5).

Next, we examined the reaction of N-Boc-4-methyl-2,3,4,5-tetrahydropyridin-1-ium (C2) with nucleophiles (Table 2). Both, the reactivity and diastereoselectivity of the reactions were similar to those of C1 and the disubstituted piperidine derivatives 2ba–be were obtained in good to high yields with excellent diastereoselectivities.

Then, the reaction of 5-phenyl-substituted N-acyliminium cation C3 was performed (Table 3). Interestingly, all reactions led to the 2,5-disubstituted piperidine derivatives 2ca–ce in very good yields and high cis-selective manner. A similar trend is observed for the reactions of the 5-methyl-substituted cation C4 and all products 2da–dc were obtained in high to excellent cis-diastereoselectivities (Table 4).

The tendency of the reactions of the 6-phenyl-substituted N-acyliminium cation C5 with nucleophiles was slightly different compared to those of C1–C4 (Table 5). The reactions proceeded in a cis-selective manner, however, the selectivity was not high except in case of product 2ed (Table 5, entry 4). The low yield of 2ed was due to the generation of an enamine as a byproduct. While the reason of the low selectivity has not been clear, it is probably due to steric repulsion between the phenyl and Boc groups. A distortion of the Boc group in C5 was also suggested by DFT calculation (see Supporting Information File 1). The reaction of 6-methyl-substituted N-acyliminium cation C6 bearing a methyl group, which is smaller than a phenyl group, gave the corresponding cis-products with high diastereoselectivities (Table 6).

As mentioned, the reaction between the cyclic N-acyliminium ions C1–C6 and several nucleophiles proceeded diastereoselectively. To clarify the reason of the observed selectivity, 1H NMR analyses of C1–C6 were performed at low temperature (Figures 1–3, see also Supporting Information File 1). All protons on the piperidine ring in C1 (Ha–Hh) have been assigned by H–H COSY (Figure 1). In addition, the signal of Hd (3.10 ppm) exhibited an axial–axial coupling (J > 10 Hz) and 7.1% ROE was observed between Hd and Hg. These results suggest that Hd adopts an axial and the phenyl group a pseudo-equatorial position at low temperature.

The low temperature NMR analysis of C3, which has a phenyl group at 5-position, was next performed and the 1H NMR spectrum is depicted in Figure 2. An axial–axial coupling between He and Hf was observed, suggesting that these two protons were located at axial positions. This result indicates that the phenyl group of C3 was located in the pseudo-equatorial position.

It is commonly assumed that the diastereoselectivity of the disubstituted piperidine derivatives 2a–f was influenced by the conformation of the N-acyliminium ions C1–C6. In this context Stevens proposed that the conformation of the six-membered N-acyliminium ion would be a half-chair form and that the attack of the nucleophile proceeds from that side that generates a stable chair form product, because an attack from another side would lead to a more unstable product with a twist form [13]. As a close study, Woerpel reported a diastereoselective substitution reaction for synthesizing disubstituted tetrahydropyrans via six-membered oxocarbenium ions generated in situ from tetrahydropyran acetals [14]. If the Stevens’ hypothesis is true, a nucleophilic reaction with C1, having a pseudo-equatorial phenyl group, should give a trans-2,4-disubstituted product (Figure 5). Similarly, acyliminium ions C3 and C5 should give the cis-2,5- or cis-2,6-disubstituted piperidine derivatives, respectively. These explanations are consistent with above mentioned conformational analyses results, and the hypothesis was in agreement with the experimental results (Figure 6).

In this study, we presented an efficient method for the highly diastereoselective synthesis of disubstituted piperidine derivatives through the reaction of N-acyliminium ions with nucleophiles. The starting N-acyliminium ions were generated by the indirect cation pool method and their conformations were confirmed by low temperature NMR analyses for the first time. The experimental results were fully consistent with DFT calculations. The correlation between the stereochemistry of the N-acyliminium ions and the reaction products is in agreement with common interpretation and further synthetic applications and more detailed investigations of the reaction mechanism are in progress in our laboratory.

© 2018 Mitsudo et al.; licensee Beilstein-Institut.
This is an Open Access article under the terms of the Creative Commons Attribution License (http://creativecommons.org/licenses/by/4.0), which permits unrestricted use, distribution, and reproduction in any medium, provided the original work is properly cited.
The license is subject to the Beilstein Journal of Organic Chemistry terms and conditions: (https://www.beilstein-journals.org/bjoc) 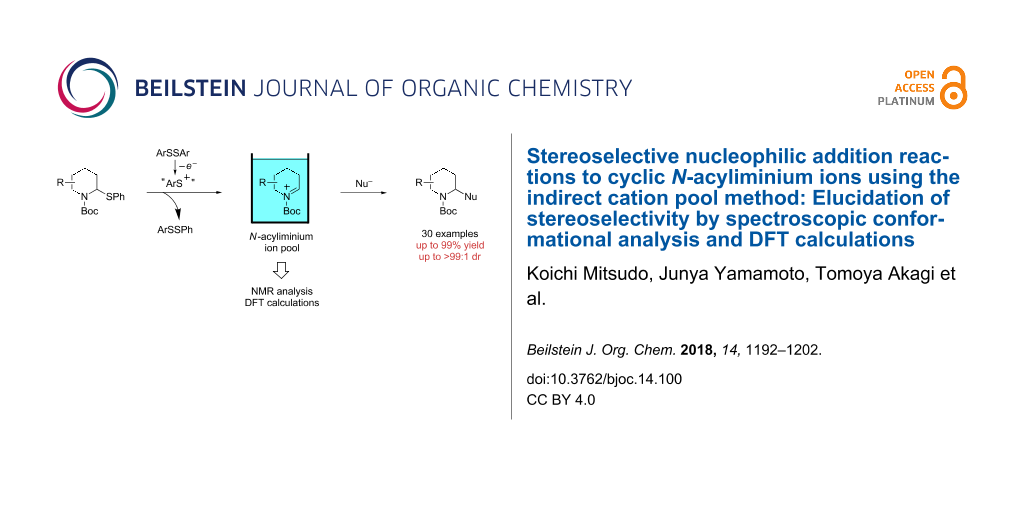