This article is part of the Thematic Series "Dispersion interactions".

The understanding and control of the light-induced isomerization of azobenzenes as one of the most important classes of molecular switches is crucial for the design of light-responsive materials using this entity. Herein, we present the stabilization of metastable (Z)-azobenzenes by London dispersion interactions, even in the presence of comparably stronger hydrogen bonds in various solvents. The Z→E isomerization rates of several N-substituted 4,4′-bis(4-aminobenzyl)azobenzenes were measured. An intramolecular stabilization was observed and explained by the interplay of intramolecular amide and carbamate hydrogen bonds as well as London dispersion interactions. Whereas in toluene, 1,4-dioxane and tert-butyl methyl ether the hydrogen bonds dominate, the variation in stabilization of the different substituted azobenzenes in dimethyl sulfoxide can be rationalized by London dispersion interactions. These findings were supported by conformational analysis and DFT computations and reveal low-energy London dispersion forces to be a significant factor, even in the presence of hydrogen bonds.

The photo-controlled E→Z isomerization of azobenzene has been known for decades [1] and has originated a wide field of applications in recent years. This molecular switch has been utilized inter alia in the rising field of photopharmacology [2,3], the manipulation of biomolecular processes [4-6] as well as in molecular machinery [7,8] and materials science [9-11]. Azobenzenes are highly stable, easily synthesized [12] and show reversible isomerization from the thermally stable E- to the Z-isomer upon irradiation with UV light. The metastable Z-azobenzene re-isomerizes to the E-conformer either thermally or upon irradiation with visible light [13,14]. Interestingly, the thermal stability of azobenzene isomers can be reversed by the incorporation of azobenzene units in macrocyclic arrangements [15]. For example, the groups of Tamaoki [16] and Herges [17] reported azobenzophanes that isomerize thermally to their energetically lower Z-conformations from their corresponding higher energy E-isomers. Moreover, our group presented a highly strained bisazobenzophane that was found to be stable exclusively in its (Z,Z)-form. Consequently, no isomerization, neither photochemically nor thermally, to its (E,Z)- or (E,E)-state occurred on the observed time scale [18].

The thermal half-lives of acyclic (Z)-azobenzenes can be prolonged dramatically by ortho-fluorine substitution, resulting in half-lives of up to two years at room temperature [19]. These highly thermally stable (Z)-ortho-fluoroazobenzenes can be re-isomerized almost instantaneously in an electrocatalytic fashion [20]. Furthermore, (Z)-azobenzenes can also be stabilized without changing their electronic configuration by attractive London dispersion (LD) interactions [21,22]. In a recent study, we reported that all-meta-alkyl-substituted (Z)-azobenzenes increase in stability with increasingly larger substituents (Scheme 1) [23]. Supported by density functional theory (DFT) computations, attractive LD forces were identified as the origin of this stability trend. Based on this study, LD interactions represent a valuable tool for the design of novel azobenzene photoswitches [24]. Herein we provide further evidence for the importance of LD as unneglectable stabilizing element in controlling interactions in functionalized molecules.

During studies on cyclobisazodiphenylmethane [18] we noticed that the bulky (Z)-4,4’-bis[4-(3,5,5-trimethylhexanoylamino)benzyl]azobenzene (4, Scheme 2a) showed an unexpectedly increased thermal half-life compared to other azobenzenes 5–7 in tert-butyl methyl ether (TBME) as solvent. This observation is surprising, since azobenzenes 4–7 are electronically very similar as the methylene linker prevents conjugation of the N-aryl and the azobenzene moieties. At first thought, the large spatial separation of the N-substituted moieties in (Z)-4–7 make intramolecular stabilizing interactions unlikely. Nevertheless, it can be envisioned that the freely rotatable Ar–CH2–Ar units should allow the formation of close proximity conformers of (Z)-4a in solution, in which attractive interactions, such as hydrogen bonding and London dispersion, may indeed become possible (Scheme 2b) [25]. To further investigate this phenomenon, the rates of the thermal Z→E isomerization of azobenzenes 4–7 were determined in different solvents and at different temperatures (for syntheses, see ref. [18] and experimental section).

As outlined before, several stabilizing interactions such as LD, hydrogen bonding and solvation effects are possible for the stabilization of Z-azobenzenes 4–7. To estimate the influences of those effects, a conformer distribution analysis was performed to identify low-lying conformations of the corresponding (Z)-azobenzenes. The energetically favored conformers found (within 1.5 kcal mol−1 for 4 and 5 kcal mol−1 for 5–7, respectively, relative to the lowest energy conformer) were then re-optimized at the B3LYP/6-31G** [26-29] level of theory with and without D3(BJ) [30,31] dispersion correction (gas phase) (conformations of one enantiomer of each diastereomer of 4 were analyzed. The maximum stabilization was found for (R,S)-4. For the other diastereomer, see Supporting Information File 1).

As it can be seen in Table 2, the computations reproduced the stabilization of the tight conformations relative to their open forms, which is in agreement with the experimentally observed kinetics of azobenzenes 4–7. Comparing the free energies of azobenzenes 4–7 relative to their sterically less crowded conformations, where the diphenylmethane units point away from each other, azodiamide 4 was found to feature the highest stabilization, whereas the tert-butylcarbonylamino compound 5 and Boc-protected derivative 6 are almost equally stabilized. Furthermore, azodiamine 7 shows the lowest relative stabilization and thus isomerizes most rapidly. Additionally, all compounds form intramolecular hydrogen bonds between the N-substituted moieties. However, the higher relative free energies computed with D3(BJ) dispersion correction, as well as the close H–H contacts in all compounds of about 2.4 Å to 3.0 Å support the stabilizing effect of LD interactions in (Z)-azobenzenes 4–7. Figure 1 visualizes the computational findings for the compared conformers of (Z)-4. A noncovalent interaction (NCI) analysis [32,33] of (R,S)-4 in its tightly folded conformation revealed multiple attractive H–H as well as H–π interactions between the amide residues and the aryl groups to be responsible for the overall stabilization (green and blue isosurfaces in Figure 1b).

Apparently, hydrogen bonds are much stronger than LD interactions and are mainly responsible for the observed stabilization effects, which is also represented as a blue surface in the NCI plot of (R,S)-4 c1. Furthermore, it is known that amides form stronger hydrogen bonds than carbamates and the strength also depends on the steric bulk of the amide [34]. This explains the highest stabilization of the trimethylhexanoylamide 4 (experimentally and computationally), followed by the tert-butylamide 5 and tert-butyl carbamate 6, which are almost equally stabilized. Nevertheless, hydrogen bonds are strongly dependent on the solvent system and become weaker with increasing dielectric constant of the solvent [35]. This fact becomes obvious when comparing the half-lives of azobenzene 4 in non-polar toluene or TBME with polar DMSO. In contrast to toluene, the half-life of 4 decreased almost by 50% in DMSO due to the weakening of intramolecular hydrogen bonding. As a result, all azobenzenes despite 7 showed comparable isomerization half-lives in DMSO. Accordingly, LD interactions can be responsible for the slightly but significantly prolonged half-lives compared to azodiamine 7. Analyzing the isomerization in 1,4-dioxane, weak hydrogen bonds as well as dispersion interactions are operative, which is expressed by the same isomerization half-life trend as in toluene, yet with lower absolute values. These results show, that LD interactions may indeed contribute to the overall stabilization of complex molecules even in the presence of stronger interactions, such as hydrogen bonds [36,37].

In conclusion, unexpected variations in the isomerization rates of azobenzenes with different remote nitrogen substituents were observed. The experimental and computational investigations reveal a subtle interplay of hydrogen bonding, LD interactions and solvent effects. In general, intramolecular hydrogen bonds were found to have the strongest influence on the observed thermal Z→E isomerization half-lives. However, LD becomes the decisive factor in polar solvents in which hydrogen bonding plays a minor role. This study demonstrates the importance of even small energy interactions, such as LD, and provides new insights for the application of LD as design element in complex systems in general.

© 2018 Heindl et al.; licensee Beilstein-Institut.
This is an Open Access article under the terms of the Creative Commons Attribution License (http://creativecommons.org/licenses/by/4.0), which permits unrestricted use, distribution, and reproduction in any medium, provided the original work is properly cited.
The license is subject to the Beilstein Journal of Organic Chemistry terms and conditions: (https://www.beilstein-journals.org/bjoc) 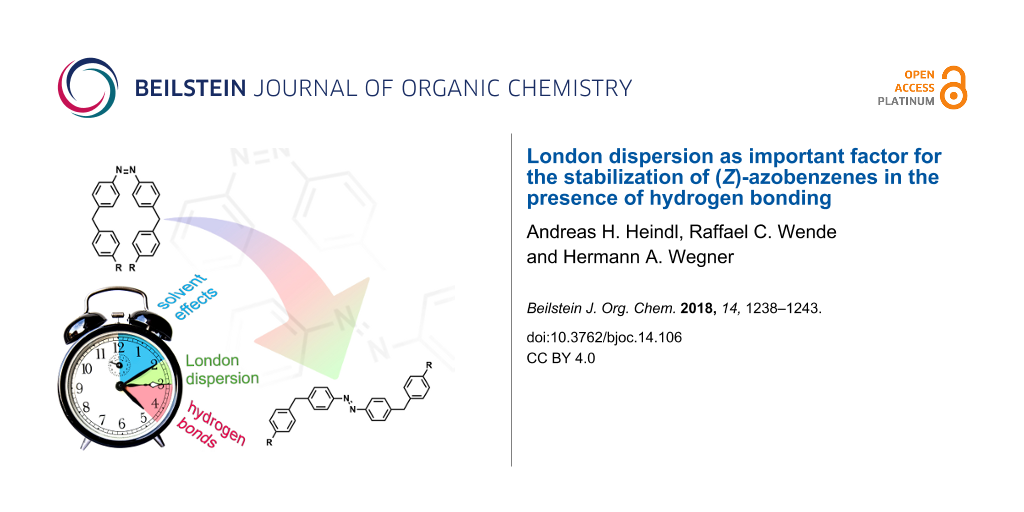