All articles from this author
Ryo Kuriki

Graphitic carbon nitride (g-C3N4) was synthesized by heating urea at different temperatures (773–923 K) in air, and was examined as a photocatalyst for CO2 reduction. With increasing synthesis temperature, the conversion of urea into g-C3N4 was facilitated, as confirmed by X-ray diffraction, FTIR spectroscopy and elemental analysis. The as-synthesized g-C3N4 samples, further modified with Ag nanoparticles, were capable of reducing CO2 into formate under visible light (λ > 400 nm) in the presence of triethanolamine as an electron donor, with the aid of a molecular Ru(II) cocatalyst (RuP). The CO2 reduction activity was improved by increasing the synthesis temperature of g-C3N4, with the maximum activity obtained at 873–923 K. This trend was also consistent with that observed in photocatalytic H2 evolution using Pt-loaded g-C3N4. The photocatalytic activities of RuP/g-C3N4 for CO2 reduction and H2 evolution were thus shown to be strongly associated with the generation of the crystallized g-C3N4 phase.

Carbon nitride is one of the oldest synthetic polymers [1], and has several allotropes. Among them, graphitic carbon nitride (g-C3N4) is the most stable form and is an emerging material as an organic semiconductor photocatalyst active for various kinds of reactions such as water splitting, CO2 reduction, and degradation of harmful organic compounds, because of its non-toxic, stable, and earth-abundant nature [2-7].

In these systems, structural properties of g-C3N4 such as specific surface area and porosity have a strong impact on activity, because they strongly affect the efficiency of electron/hole utilization to the surface chemical reactions [21,22]. Apart from mpg-C3N4 that is usually prepared by a hard-template method with multistep procedures [9,23], g-C3N4 having a relatively higher surface area can be readily prepared by heating urea, which is an inexpensive and readily available precursor, in air [14,24]. In fact, the urea-derived g-C3N4 exhibited an enhanced activity for CO2 reduction compared to mpg-C3N4, when modified with Ag nanoparticles and a binuclear Ru(II) complex [14].

Thermal heating of urea results in decomposition and formation of g-C3N4, whose physicochemical properties should be dependent on the heating temperature. In this work, we investigated photocatalytic activities of g-C3N4, which was synthesized by heating urea at different temperatures, for visible-light CO2 reduction with the aid of a mononuclear Ru(II) complex, RuP (see Scheme 1). As mentioned earlier, g-C3N4 has been studied as a visible-light-responsive photocatalyst mostly for H2 evolution from aqueous triethanolamine (TEOA) solution [2,3,5]. The present work also compares the activities for CO2 reduction with those for H2 evolution in order to obtain a better understanding on photocatalytic activities of g-C3N4 for different kinds of reactions.

Figure 1 shows XRD patterns of g-C3N4 samples synthesized at different temperatures. Two peaks are observed at 2theta = 13 and 27.4°, which are assigned to an in-planar repeating motif and the stacking of the conjugated aromatic system, respectively [25]. This result confirms the successful synthesis of g-C3N4 at the present temperature range examined. With increasing temperature, the intensity of these peaks became stronger, indicating that the formation of g-C3N4 was facilitated at higher temperatures. It is, however, noted that the high-temperature heating also caused the loss of the product mass due to the decomposition of g-C3N4 itself [25].

FTIR spectra for the same set of the samples are shown in Figure 2. Characteristic peaks can be seen in the 1650–1200 cm−1 region. The peaks at 1322 and 1243 cm−1 are assigned to the stretching vibration of connected units of C–N(–C)–C (full condensation) or C–NH–C (partial condensation) [26,27]. The leftovers of 1641, 1569, 1462 and 1412 cm−1 are assigned to stretching vibration modes of heptazine-derived repeating units, and are sharper with increasing temperature. This further indicates the production of g-C3N4 at elevated temperatures, consistent with the XRD analysis (Figure 1). The 812 cm−1 peak is attributed to the out-of-plane bending vibration characteristic of heptazine rings.

The results of elemental analyses for the as-prepared g-C3N4 samples were listed in Table 1. In all cases, not only carbon and nitrogen, which are the main constituent elements of g-C3N4, but also hydrogen and oxygen were detected. As the synthesis temperature increased, the compositions of carbon and nitrogen became closer to the ideal values, although the carbon content was obviously lower. The hydrogen and oxygen impurities were also reduced with an increase in the synthesis temperature. These results indicate that rising temperature is important to obtain purer g-C3N4 in terms of the chemical composition.

TEM images of the same samples are shown in Figure 3. The sample synthesized at 773 K had a lot of circular voids having 50–100 nm in size. At 823 K, this void structure was less prominent, and sheet-like morphology started to appear. With a further increase in the synthesis temperature, the synthesized samples consisted of disordered nanosheets. This change in particle morphology is in qualitative agreement with that in the specific surface area (see Table 1).

Figure 4 shows the UV–visible diffuse reflectance spectra of g-C3N4 synthesized at different temperatures. All of the samples exhibited an absorption edge at 420–450 nm, attributed to electron transitions from the valence band formed by nitrogen 2p orbitals to the conduction band formed by carbon 2p orbitals [25]. The band gaps of the synthesized g-C3N4 were estimated to be ca. 2.8–3.0 eV, from the onset wavelength of the diffuse reflectance spectra. This value is consistent with that reported previously [24]. As the synthesis temperature increases, the onset wavelength is shifted to longer wavelengths (i.e., band gap is decreased), with more pronounced tailing absorption extending to 550 nm that is assigned to n−π* transitions involving lone pairs on the edge nitrogen atoms of the heptazine rings [28,29]. While the n−π* transitions are forbidden for perfectly symmetric and planar heptazine units, they become partially allowed with increasing the condensation of layers in g-C3N4, which results from an increase in the synthesis temperature.

Using the as-prepared g-C3N4, CO2 reduction was conducted with the aid of RuP cocatalyst and Ag promoter in a N,N-dimethylacetamide (DMA)/TEOA mixed solution under visible light (λ > 400 nm). Here TEOA works as an effective electron donor that scavenges holes generated in the valence band of g-C3N4 [25]. The use of DMA as the solvent for CO2 reduction using RuP/mpg-C3N4 has previously been shown to be the best choice of solvents to maximize the photocatalytic activity [10]. Because RuP does not absorb visible light efficiently, the g-C3N4 component can be activated selectively by visible light [10]. Our previous study also indicated that the amount of a molecular cocatalyst is very important in this kind of mononuclear-complex/C3N4 hybrid photocatalyst for visible-light CO2 reduction [8]. To eliminate any other effects other than heating temperature of urea, we fixed the amount of RuP in this study. Ag nanoparticles loaded on mpg-C3N4 serves as a promoter of electron transfer from mpg-C3N4 to RuP, as discussed in our previous work [13]. TEM observation indicated that the loaded Ag is in the form of nanoparticles of 5–10 nm in size (Figure 5). Without Ag (i.e., RuP/g-C3N4), formate production was clearly observable, but the activity was typically 20% that of RuP/Ag/g-C3N4. Hence we employed Ag as an additional promoter in all cases. It should be also noted that no reaction took place using only g-C3N4.

As listed in Table 2, the main product during the reaction was formate with 90–95% selectivity. Minor products were CO and H2. With increasing the synthesis temperature, the formate generation activity was improved to reach a maximum at 873–923 K, while almost unchanging the CO and H2 evolution. The catalytic turnover number of formate generation calculated based on the mole amount of RuP at the optimal conditions reached 650, which confirms the catalytic cycle of the reaction.

H2 evolution was also conducted in a mixed solution of water and TEOA. It is also noted that Pt was in situ loaded on g-C3N4 as a cocatalyst to facilitate H2 evolution. As listed in Table 2, all of the synthesized samples produced H2. Similar to the trend in CO2 reduction, the H2 evolution activity was enhanced as the synthesis temperature was increased.

The results of the photocatalytic reactions thus indicated that photocatalytic activities of g-C3N4 derived from urea were dependent on the heating temperature of urea. The trend of activity observed in both CO2 reduction and H2 evolution could be explained in terms of the formation of the g-C3N4 structure. Physicochemical analyses indicated that increasing the synthesis temperature of g-C3N4 promotes conversion of urea into g-C3N4 (Figure 1 and Figure 2), which has even better visible-light absorption (Figure 4). The better light absorption profile as well as higher specific surface area of the g-C3N4 samples synthesized at elevated temperatures would have a positive impact on the activity to a certain extent. It is also noted that the photocatalytic activity for CO2 reduction was much lower than that for H2 evolution, even though the same electron donor, TEOA, was employed. This in turn implies that there still remains much room for the improvement of CO2 reduction activity, for example, if a proper modification method, which allows for more efficient electron transfer, is developed. This is now under investigation in our laboratory.

Heating urea in air at 773–923 K resulted in the formation of g-C3N4, which exhibited photocatalytic activity for CO2 reduction into formate under visible light with the aid of a molecular Ru(II) cocatalyst. Experimental results highlighted that higher heating temperature for the synthesis led to the production of more crystallized g-C3N4 with higher specific surface area and more pronounced visible-light absorption, which was preferable for photocatalytic reactions of both CO2 reduction and H2 evolution. However, too high synthesis temperature causes a mass loss of g-C3N4 due to thermal decomposition, which is not practically desirable.

RuP was synthesized according to methods reported in our previous paper [10]. Adsorption of RuP onto Ag/g-C3N4 was conducted by dispersing 40 mg of Ag/g-C3N4 in an acetonitrile (MeCN) solution (20 mL) of RuP. The suspension was stirred overnight at room temperature in the dark to allow for the adsorption/desorption equilibrium, followed by filtration and washing with acetonitrile. The filtrates were collected and concentrated to a volume of 30 mL. The amount of the ruthenium complex absorbed was calculated based on the UV–vis spectrum of the filtrate, using Equation 1:

where Abefore and Aafter are the absorbance of the solution before and after the adsorption procedure, respectively, and C is the initial concentration of RuP.

Reactions were performed at room temperature (298 K) using an 8 mL test tube containing 4 mL of solution by dispersing 4 mg of photocatalyst powder. For H2 evolution, a mixed solution of water and TEOA (9:1 v/v) was used as the reactant solution, which was in prior purged with Ar for 20–30 min to remove residual air. Pt (3.0 wt %) was loaded in situ using H2PtCl6 (>98.5%, Wako Pure Chemicals Co.) as the precursor. For CO2 reduction, a mixed solution of DMA and TEOA (4:1 v/v) was used. Prior to irradiation, the suspension was purged with CO2 (Taiyo Nippon Sanso Co., >99.995%) for 20–30 min. A 400 W high-pressure Hg lamp (SEN) was used as a light source, in combination with a NaNO2 solution as a filter to provide visible light irradiation (λ > 400 nm). The gaseous reaction products were analyzed using a gas chromatograph with a thermal conductivity detector (GL Science, Model GC323). The formate generated in the liquid phase was analyzed via a capillary electrophoresis system (Otsuka Electronics Co., Model CAPI-3300).

This work was supported by a Grant-in-Aid for Young Scientists (A) (Project JP16H06130) from JSPS. It was also partially supported by a Grant-in-Aid for Scientific Research on Innovative Area “Mixed Anion (Project JP16H06441)” and a CREST program (Project JPMJCR13L1) (JST). K.M. acknowledges The Noguchi Institute and Murata Research Foundation financial support. R.K. wishes to acknowledge support by a JSPS Fellowship for Young Scientists (Project JP17J03705).

© 2018 Maeda et al.; licensee Beilstein-Institut.
This is an Open Access article under the terms of the Creative Commons Attribution License (http://creativecommons.org/licenses/by/4.0). Please note that the reuse, redistribution and reproduction in particular requires that the authors and source are credited.
The license is subject to the Beilstein Journal of Organic Chemistry terms and conditions: (https://www.beilstein-journals.org/bjoc) 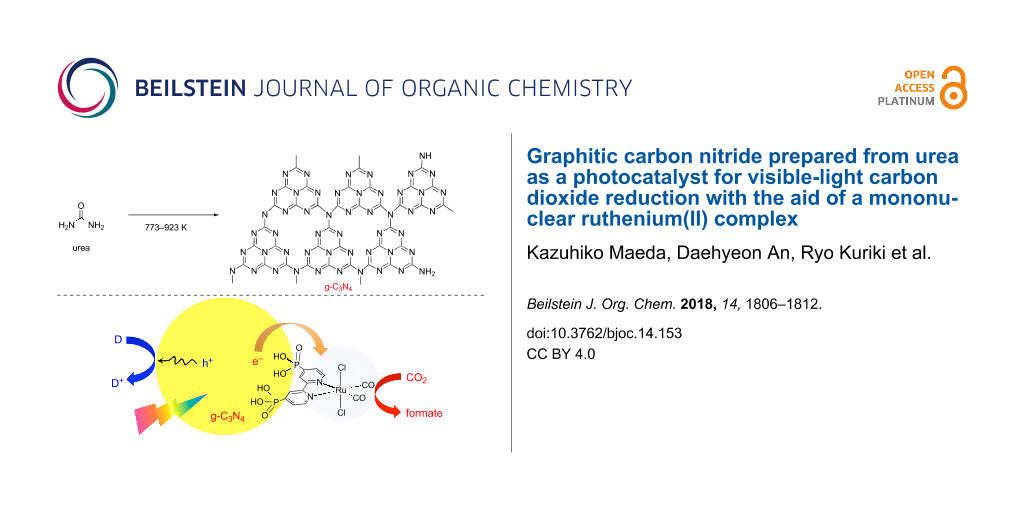