All articles from this author
Partha Sarathi Mukherjee

The coordination-driven self-assembly of two new Ru6–Pt6 hexanuclear trigonal prismatic cages comprising arene–ruthenium(II) clips (1a(NO3)2 and 1b(NO3)2) and a tritopic platinum(II) metalloligand 2 has been performed in methanol at room temperature. The [3 + 2] hexanuclear cages 3a and 3b were isolated in good yields and characterized by well-known spectroscopic techniques including multinuclear NMR, mass spectrometry, UV–vis and infrared studies. Geometry optimization revealed the shapes and sizes of these hexanuclear prismatic cages. The combination of ruthenium and platinum metal center in a one-pot self-assembly reaction showcases the construction of aesthetically elegant heterometallic structures in supramolecular chemistry leading to the formation of a single major product.

The metalloligand synthetic approach has been efficiently used to achieve the construction of heterobimetallic supramolecular architectures in order to minimize the formation of two independent homometallic architectures or a mixture of products [71-78]. The metalloligand is a kinetically stable coordination complex with a metal center and one or more appended donor site(s) which can further coordinate to another metal center [79-83]. Such metalloligands are predesigned and encrypted with the desired functional properties before they are used in self-assembly reactions so as to induce the desired functional properties into the final supramolecular architecture [84-92]. Hence, the metalloligand becomes the electron-rich building block which offers structural rigidity while the second metal is the electron-acceptor building block. The facile self-assembly of 2D-heterobimetallic supramolecular architectures are well reported in the literature [24,93,94], however, 3D-heterobimetallic systems are still less explored [95-97].

Dinuclear arene–ruthenium(II) acceptor clips/building blocks have been extensively utilized in supramolecular chemistry because of their rigid directionality toward electron-rich donors due to their restricted coordination sites as a result of the fixed position of the p-cymene moiety [24,93,98-103]. Our group and others have contributed substantially to the chemistry of self-assembled homometallic ruthenium architectures and their applications [100,102-108]. In broadening this research scope, herein, we describe the coordination-driven self-assembly of two new Ru–Pt heterometallic prismatic cages 3a and 3b obtained from the reaction of two arene–ruthenium(II) clips 1a and 1b and tritopic platinum(II) metalloligand 2 in methanol/chloroform mixture in 3:2 ratio (Scheme 1). Both cages were fully characterized by 1H, 31P, 195Pt, 1H,1H COSY, DOSY NMR, electrospray ionization mass spectrometry, and UV–vis analysis. Further structural insights were revealed by computational studies.

Self-assembly and characterization of the heterometallic cages

The treatment of the dichloride analogues of 1a and 1b with 2.1 equivalents of silver nitrate in methanol at room temperature for 3 hours gave the dinuclear arene–ruthenium(II) clips 1a,1b(NO3)2. As represented in Scheme 1, the self-assembly reactions of methanolic solutions of 1a,1b(NO3)2 and methanolic solution of the triplatinum metalloligand 2 at room temperature yielded the trigonal prismatic cages 3a and 3b. The heterometallic prismatic cages were isolated as nitrate complexes in good yields. The isolated cages are soluble in methanol, acetonitrile, acetone, nitromethane, dimethyl sulfoxide and partially soluble in chloroform and dichloromethane. The formation of these cages was ascertained by multinuclear NMR experiments and ESIMS analyses.

The DOSY NMR experiments also confirmed the formation of a single product in all the cages with the hydrodynamic radii (rH) of the heterometallic prismatic cages calculated from the Stokes–Einstein equation using the diffusion coefficients (D) obtained from the DOSY NMR experiments. The obtained values of D from the experiment are −9.631 log (m2 s−1) for 3a and −9.567 log (m2 s−1) for 3b, respectively. The calculated hydrodynamic radii (rH) of 3a and 3b are 15.57 Å, and 13.43 Å, respectively (Supporting Information File 1, Figures S19 and S20). The 1H,1H COSY NMR spectra also showed the correlation between the protons of the arene–ruthenium(II) clips as well as the correlation between the protons within the metalloligand (Supporting Information File 1, Figures S19 and S20).

The UV–vis absorption spectra recorded in methanol at room temperature show intense bands at λmax = 544, 514, 334, 290, 205 nm for 3a and λmax = 698, 644, 339, 204 nm for 3b. The intense bands at 335 nm and 291 nm for 2 correspond to charge-transfer transitions, which shift slightly to shorter wavelengths in the spectra of the heterometallic prismatic cages. The peaks in the ranges of 514–698 nm and 204–339 nm can be assigned to intramolecular and intermolecular π–π* transitions and metal-to-ligand charge transfer (MLCT) transitions associated with capped p-cymene ruthenium cap, respectively. A hypochromic shift (decrease in absorption intensity) was also observed in the spectra of the heterometallic prismatic cages as compared to the metalloligand probably as a result of coordination of electron-rich metalloligand to the electron-deficient ruthenium center (Figure 2).

Geometry optimization of the heterometallic cages

All efforts to obtain single crystals of the prismatic cages were unsuccessful so far. Thus the structures of 3a and 3b were optimized to get insights into their structural features. The tritopic platinum(II) metalloligand was optimized using the B3LYP method while the heterometallic cage structures 3a and 3b were optimized with the semiempirical method using the PM6 basis set. The energy-minimized structures showed that cage 3a has a dimension of 8.414 Å × 26.321 Å × 26.755 Å while cage 3b has a dimension of 8.231 Å × 26.227 Å × 26.598 Å. The phenyl cores of the two triplatinum metalloligands are separated by a distance of 11.376 Å in 3a and 11.456 Å in 3b. The phenyl cores are slightly out-of-plane with regards to the pyridyl groups possibly as a result of steric influence upon metal–ligand coordination (Figure 4 and Supporting Information File 1, Figure S23).

The metalloligand synthetic approach has been utilized to synthesize heterobimetallic trigonal prismatic coordination cages 3a and 3b through the one-pot coordination-driven self-assembly of dinuclear arene–ruthenium(II) clips and a tritopic platinum(II) metalloligand. The formations of the [3 + 2] trigonal prismatic Ru–Pt cages are confirmed by multinuclear NMR and ESIMS studies. The optimized structures of cages 3a and 3b showed large prismatic cages composed of twelve metal centers comprising six ruthenium(II) and six platinum(II) metal centers thus showcasing how two different metal components can be incorporated to form a single framework architecture through a one-pot self-assembly strategy.

A.A.A. is grateful to IISc Bangalore for research fellowship. P.S.M. thanks the Department of Science and Technology (DST), India, for financial support. We acknowledge Mr Prodip Howlader’s help for geometry optimization of the cages.

© 2018 Adeyemo and Mukherjee; licensee Beilstein-Institut.
This is an Open Access article under the terms of the Creative Commons Attribution License (http://creativecommons.org/licenses/by/4.0). Please note that the reuse, redistribution and reproduction in particular requires that the authors and source are credited.
The license is subject to the Beilstein Journal of Organic Chemistry terms and conditions: (https://www.beilstein-journals.org/bjoc) 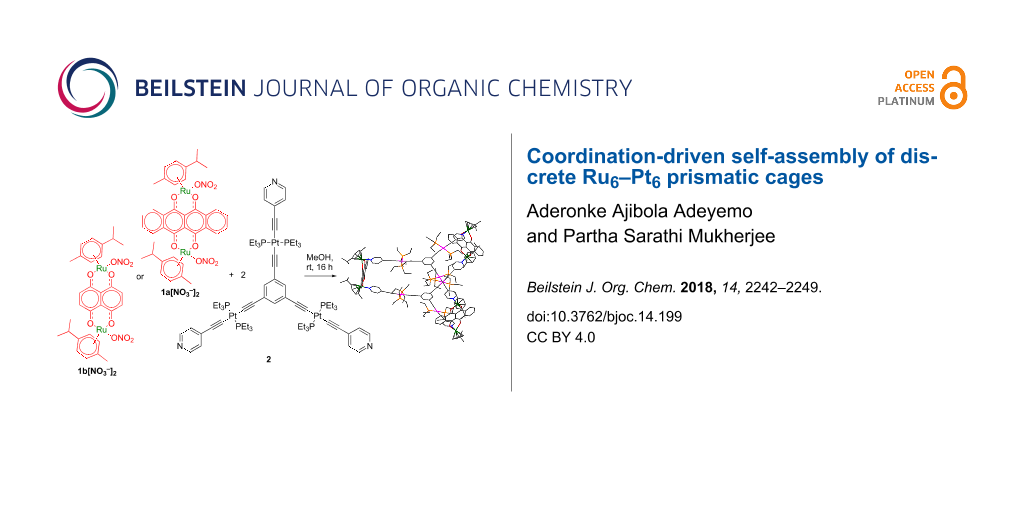