Cyclic benziodoxole systems have become a premier scaffold for the design of electrophilic transfer reagents. A particularly intriguing aspect is the fundamental II–IIII tautomerism about the hypervalent bond, which has led in certain cases to a surprising re-evaluation of the classic hypervalent structure. Thus, through a combination of 17O NMR spectroscopy at natural abundance with DFT calculations, we establish a convenient method to provide solution-phase structural insights for this class of ubiquitous reagents. In particular, we confirm that Shen’s revised, electrophilic SCF3-transfer reagent also adopts an "acyclic" thioperoxide tautomeric form in solution. After calibration, the approach described herein likely provides a more general and direct method to distinguish between cyclic and acyclic structural features based on a single experimental 17O NMR spectrum and a computationally-derived isotropic shift value. Furthermore, we apply this structural elucidation technique to predict the constitution of an electrophilic iodine-based cyano-transfer reagent as an NC–I–O motif and study the acid-mediated activation of Togni's trifluoromethylation reagent.

The remarkable stability and reactivity of Togni's hypervalent iodine-based trifluoromethylation reagents (e.g., 4a) [1] have inspired the development of analogous compounds, including a well-known SCF3-transfer reagent 5 in 2013 by Shen and co-workers [2,3]. In the presence of AgSCF3, chloroiodane 2a afforded an isolable and powerful electrophilic SCF3 source, which was used, for example, in α-ketone functionalizations among other reactions [2,3]. While at the time the proposed cyclic hypervalent iodine structure 5a appeared reasonable in analogy to other well-established transfer reagents, it was unequivocally demonstrated to exist as the acyclic thioperoxide tautomer 5b by Buchwald and co-workers in 2014 [4]. The structural reassignment was prompted by a series of remarkable, detailed inspections of 1H NMR spectra of precursors and congeners. A final structural corroboration came about by successfully encapsulating 5b, an oil under ambient conditions, in a metal-organic framework (5b@MOF). This non-trivial protocol rendered it amenable to X-ray diffraction studies confirming the aforementioned structural reassignment. From a theoretical standpoint, acyclic isomer 5b is predicted to be thermodynamically favored over the cyclic form 5a by more than 10 kcal/mol by DFT calculations [5]. However, this type of computational analysis is in general still not decisive. For example, while Togni reagent 4a is thermodynamically less favorable than its acyclic isomer 4b by over 50 kcal/mol, a high kinetic barrier suppresses the [a → b] isomerization (Figure 1) [5,6].

With SCF3 reagent 5a/5b, structure determination was notably challenging and solely provides a solid-state structural perspective. Thus, we wondered whether a correct structural assignment of reagent 5a/b would have been feasible without having to resort to the preparation of crystalline congeners and/or the preparation of 5b@MOF. Importantly, establishing a reliable way to differentiate cyclic (a) from acyclic (b) isomers in solution would facilitate future structure determination of similar iodine-based group-transfer reagents and provide greater mechanistic insight into reactivity of these reagents (Figure 1). Accordingly, we describe herein how 17O NMR spectroscopy in tandem with gauge-independent atomic orbital (GIAO) calculations may be a viable approach to establishing the predominant tautomer in solution.

Arguably, the most common methods for structural elucidation of small organic molecules are one-dimensional 1H and 13C NMR spectroscopic techniques in combination with suitable two-dimensional experiments (COSY, HMBC, NOESY, etc.) [7]. However, in many cases (e.g., 5a versus 5b) these may only provide limited information, as neither nucleus is a primary constituent of the central iodine(III) (a, X–I–O) or iodine(I) (b, O–X) motif of interest. In stark contrast, changes in the oxygen ligand's environment should be readily traceable upon oxidation from alcohol 1 to chloroiodane 2a (Figure 1, maroon), as well as during ensuing ligand substitutions, for example to fluoroiodane 3a. In particular, whether oxygen is covalently bound to iodine or another element may heavily influence its shielding and thereby provide structural information by means of 17O NMR spectroscopy.

While natural abundance 17O NMR has been employed previously, including the analysis of hypervalent iodine compounds [8-10], this spectroscopic method has not yet found its entry into the organic chemist's standard NMR toolbox. This, in large part, may be attributed to the extremely low natural abundance of the 17O isotope (<0.04%) [11,12]. Consequently, the experiment requires high sample concentrations and relatively long experimental times, and ultimately fairly broad signals are observed. Yet, due to the large chemical shift range available (>1000 ppm), the technique may still prove diagnostic, especially when paired with calculated oxygen isotropic shift values. In order to substantiate this working hypothesis, five pairs of cyclic (a) vs acyclic (b) structural isomers 2–6 were investigated initially by DFT at the ωB97XD/aug-cc-pVDZ (aug-cc-pVDZ-PP basis set for iodine [6,13]) level of theory using Gaussian 09 [14,15]. The ωB97XD functional was chosen as a reasonably cost-effective way to include long-range dispersion [14].

Geometry optimizations of both cyclic and acyclic isomers were followed by calculation of oxygen isotropic shift values (δiso) using the GIAO method (Table 1) [8-10]. Furthermore, these computed isotropic shift values (δiso) were not referenced, for example to water, since they were directly correlated to experimentally determined 17O NMR shifts (vide infra). In addition, note that the calculations did not include treatment of spin-orbit-induced heavy-atom effects [16]. While undoubtedly important in the framework of classical bonding paradigms, they will only have a negligible effect on oxygen shifts derived for hypervalent iodine species. Specifically, spin-orbit effects heavily depend on and propagate through s-character rich bonds. However, within classical bonding theory the hypervalent bond about iodine comprises purely of p-orbitals (Rundle-Pimentel model) and most recently, this notion was corroborated for structure 4a in a computational study [17]. Hence, effects on oxygen isotropic shifts will be minor at best and systematic and therefore, be accounted for by the abovementioned referencing to experimentally determined values.

We found that the calculated δiso-values for the two isomers 2a/b and 4a/b differ by ∆δiso ≈ 20; these differences are significantly larger for 3a/b (∆δiso = −399.1), 5a/b (∆δiso = 81.2) and 6a/b (∆δiso = 52.7). Given that the larger the difference ∆δiso, the more likely a successful structural assignment based on 17O NMR spectroscopy becomes, this technique may indeed prove useful for the identification of the isomeric pairs 2–6. Accordingly, spectral data on 1, 2a, 3a, 4a, 5 (assuming no assignment ), and 6 (unassigned) were acquired and further supplemented with values from some additional, structurally well-characterized hypervalent iodine compounds available in the literature (see Table 1 and Supporting Information File 1). Thus, a data set with a total of 11 entries was obtained.

To obtain experimental 17O NMR shifts, we used samples prepared in chloroform-d at a concentration of approximately 1.3 M. The obtained resonances typically featured a full-width at half maximum of around 1000–1500 Hz (Figure 2A). Therefore, the uncertainties of the determined 17O chemical shift values δobs are rated at a minimum of ±10 ppm, and thus, a reliable structural assignment should become feasible if predicted shift differences between the constitutional isomers a and b are greater. The observed 17O NMR chemical shifts ranged from 32 ppm (5) to 137 ppm (a C2F5-transfer reagent). Compounds 2a and 4a resonate at similar frequencies, with respective chemical shifts of 116 ppm and 130 ppm. For compound 5, an approximately 100 ppm smaller chemical shift value was observed with δobs = 32 ppm, and for unassigned structure 6 we measured 115 ppm. It is noteworthy to indicate that under certain circumstances the absolute 17O NMR shift alone may be misleading in structure determination. For instance, the experimental value of 59 ppm for the known cyclic fluoroiodinane 3a is closer to the observed values of acyclic 1 (67 ppm) and 5b (32 ppm) than it is to cyclic 2a and 4a. However, assessment of the DFT-calculated isotropic shift values (δiso) in tandem with experimental 17O NMR data (δobs) lends credence to the aforementioned structural assignment. Specifically, for the "unassigned" compounds mentioned above, the best R2-value for a linear relationship δobs ~ δiso is obtained when 5 and 6 are assigned as 5b and 6a, where the additional known compounds serve as calibration (Figure 2B) [18]. Based on the thus derived equation, 17O NMR chemical shifts δcalc can be predicted for both isomers. A notable exception is the free alcohol 1, which is not part of the linear relationship and consequently displays a large residual value (Table 1). Conceivably, this may be due to intermolecular hydrogen bonding with the solvent or other alcohol molecules in the concentrated solution. In fact, including a methanol solvent molecule as a hydrogen-bond donor in the DFT calculation will shift the δcalc in the right direction for 1 (i.e., to δcalc = 47 ppm based on δiso = 245.8, although |δcalc – δobs| is still 20 ppm).

For the pair 5a/b a difference ∆δcalc of 104 ppm is obtained and a value of 68 ppm results for 6a/b (Figure 2). Both figures are significantly larger than the 17O chemical shift's lower-bound uncertainty estimate of ±10 ppm. While 5a/b indeed has been shown to exist as the thioperoxide 5b (vide infra), a crystallographic study on 6a/b is required to corroborate our prediction as 6a.

To further gauge the utility of this approach, the activation of Togni reagent 4a was studied, in particular its protonation with a strong acid [1]. This brings about a significant elongation of the I–O bond from 2.203(5) Å in 4a to 2.4991(13) Å in the fully protonated form 4c [1,19]. Most recently, Toste and co-workers studied this activation strategy too and demonstrated that in the presence of an equivalent of gaseous HCl compound 4a afforded an isolable iodonium-type structure [20]. Although this activation can be conveniently followed by 19F NMR spectroscopy with 4a resonating at −40.1 ppm and the fully protonated “iodonium” congener 4c at −20 ppm [1], this technique provides no indication on how to best represent 4c in solution. Does the compound resemble the molecular structure obtained in the solid state with oxygen still coordinated to iodine or would a free alcohol be a more accurate representation? In order to generate 4c, reagent 4a was treated with five equivalents of trifluoroacetic acid (TFA) and then subjected to spectroscopic analysis. A 19F NMR chemical shift of −23.2 ppm was obtained, thereby confirming the presence of 4c. However, under these strongly acidic and activating conditions, the compound is unstable over a prolonged period of time (12 h). During the acquisition of the 17O NMR data, approximately 36% of 4c had decomposed to the corresponding α-methylstyrene derivative as indicated by 1H NMR spectroscopy (see Supporting Information File 1). As this byproduct is 17O NMR silent, the spectral data acquisition was unhampered and a chemical shift δobs = 77 ppm was measured. This value is larger than the chemical shift obtained for the free alcohol 1 (67 ppm) and at the same time, also significantly smaller than the value obtained for the native reagent 4a (130 ppm). Structure 4c was computed in the gas phase in absence of a counter anion and geometry optimization furnished a minimum reminiscent of the pictographic representation of 4c with an intact but significantly elongated I–O bond of 2.55 Å (Figure 3) and qualitatively, the NMR data are in support of this notion. From a quantitative point of view, the data points (δiso, δobs) for 1, 4b, and 4c afforded a perfect linear correlation with R2 = 1, thus lending further credence to the representation of the protonated form 4a in solution as 4c (see Supporting Information File 1).

In summary, the present study demonstrates that 17O NMR spectroscopy at natural abundance coupled with DFT-calculated isotropic shift values can be used to gain insight into the solution-phase tautomerism observed in iodine-based group-transfer reagents. In particular, we confirm that Shen’s revised, electrophilic SCF3-transfer reagent adopts an "acyclic" thioperoxide tautomeric form in solution whereas an electrophilic cyanide source prefers the "cyclic" iodane. Since 17O NMR experiments are easily implemented on contemporary spectrometers, this method may provide the most convenient spectroscopic handle to re-evaluate known structures, facilitate further mechanistic studies, and provide a complimentary approach to solid-state structural analysis.

1,8-Bis(dimethylamino)naphthyl-2-ketimines: Inside vs outside protonation

© 2018 Santschi et al.; licensee Beilstein-Institut.
This is an Open Access article under the terms of the Creative Commons Attribution License (http://creativecommons.org/licenses/by/4.0). Please note that the reuse, redistribution and reproduction in particular requires that the authors and source are credited.
The license is subject to the Beilstein Journal of Organic Chemistry terms and conditions: (https://www.beilstein-journals.org/bjoc) 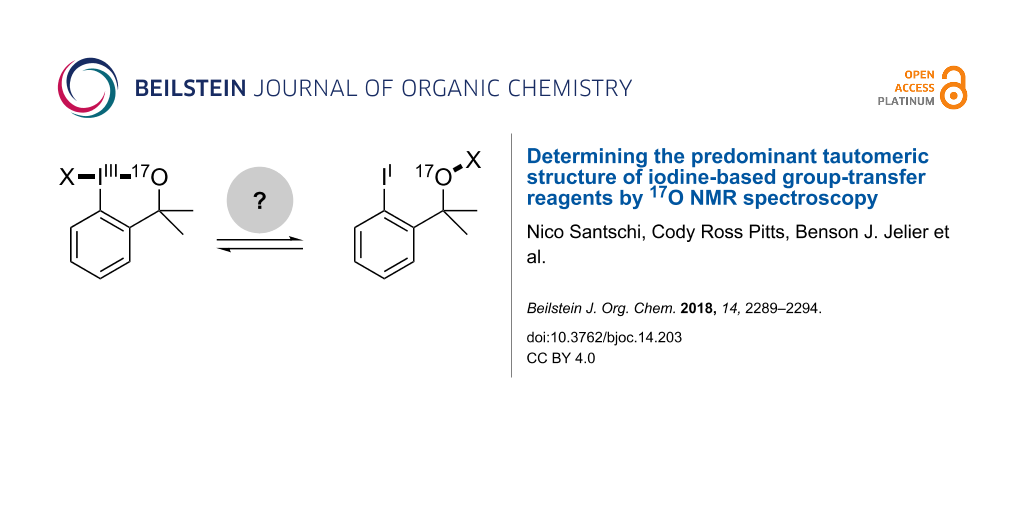