All articles from this author
Raman Gupta


All articles from this author
Debashis Majee


All articles from this author
Sampak Samanta

§ Both the authors equally contributed to this work.

An intriguing DABCO-catalyzed and DBU-promoted one-pot synthesis of an important class of (2-hydroxyaryl)pyridine derivatives bearing a carboxylate or a nitrile group suitably placed at C3 position of the aza-ring has been achieved in acceptable chemical yields with a broad functional group tolerance. This sequential C–C/C–N bond making process proceeds through a regioselective allylic alkylation/aza-Michael reaction between MBH carbonates derived from an acrylate/acrylonitrile and N-sulfonyl ketimines as C,N-binucleophiles catalyzed by DABCO, followed by elimination of SO2 under the influence of base and subsequent aromatization in an open atmosphere.

Substituted pyridines are one of the most fascinating classes of heterocyclic molecules which are present in many biologically active natural and synthetic products [1-3]. In addition, several pyridine scaffolds have been used in agro-chemical products [4], medicines [5], chelating agents in transition metal complexes [6,7], and material science [8,9]. Pyridine derivatives such as vitamins B6, B3 (niacin), and nicotinamide adenine dinucleotide (NAD) play a significant role in the metabolism process of living organisms. Consequently, many contributions have been made by synthetic chemists to search for new method for the efficient synthesis and functionalization of pyridines. Among the most significant techniques are condensation reactions between reactive carbonyls and amines (namely Hantzsch [10] and Chichibabin pyridine synthesis [11,12]), transition metal salts-catalyzed [4 + 2] [13-18], [2 + 2 + 2] [19-26], and [3 + 3] cyclization reactions [27], multicomponent reactions [28-33], and direct C–H functionalizations on the pyridine rings [34-36]. Particularly, the fascinating construction of pyridines bearing a carboxylate or CN group at C3 position has been a lucrative target for chemists due to the pharmaceutically privileged status (Figure 1).

In this context, Rodriguez’s group successfully established a one-pot three-component reaction between β,γ-unsaturated α-ketoesters, 1,3-dicarbonyl compounds, and ammonium acetate promoted by acid under aerobic conditions [37,38]. Furthermore, Brønsted- and Lewis-acid-catalyzed cyclization reactions between β-enamino esters (derived from β-ketoesters and ammonium acetate) and alkynones/α,β-unsaturated carbonyls/in situ generated α,β-unsaturated ketones (from alkyl ketones) as Michael acceptors to construct a diverse set of nicotinate derivatives were developed by Bohlman–Rahtz [39], Bagley [40,41] and other groups independently [42-55]. Similarly, the synthesis of functionalized nicotinonitriles has been also greatly explored in the literature [56,57]. Even though great progress, the synthesis of (2-hydroxyaryl)pyridines bearing a CO2Et/CN group at C3 position remains a daunting task in synthetic organic chemistry [58,59]. A literature study reveals that a lot of research is focused on the synthesis of (2-hydroxyaryl)pyridines from 2-arylpyridines via a direct C–H hydroxylation on the aryl ring using several expensive transition metal salts (e.g., Pd(II) [60-63], Rh(III) [64,65], Ru(II) [66]) as catalysts (Scheme 1a). However, the above methods have several drawbacks such as the requirement of high temperatures or use of strong oxidants (H2O2, oxone, K2S2O8, TBHP, PIDA, NHPI etc.) that are not much compatible with functionality, precluding late-stage functionalization. Moreover, the scope of substitution on the pyridine ring is limited which in turn hampers the practical usage. Therefore, we are interested to devise a metal-free based general synthetic technique for the construction of substituted (2-hydroxyaryl)nicotinate/nicotinonitrile scaffolds. In recent years, our research group has been concentrated on the development of new synthetic methods for the preparation of polyfunctionalized pyridine building blocks involving cyclic sulfamidate imines as carbon nucleophiles [67-71]. In this direction, we recently documented an excellent example of an organobase promoted pot-economical approach to 4,6-disubstituted nicotinates by choosing 5-membered cyclic sulfamidate imines and MBH acetates of acrylate as coupling partners [68]. Herein, we further present a DABCO-catalyzed and DBU-promoted sequential one-pot procedure for the access to the interesting class of (2-hydroxyaryl)nicotinates/nicotinonitriles from N-sulfonyl ketimines and MBH adducts as useful synthons [72,73] in the presence of open atmosphere (Scheme 1b).

We have commenced the model reaction between cyclic N-sulfonyl imine 1a as interesting C,N-binucleophiles [74] and MBH carbonate of acrylate 2a using 20 mol % of DABCO in toluene at room temperature for 14 h. This reaction produced 87% yield of allylic alkylation adduct 3a along with a small amount of 9,10-dihydro-8H-benzo[e]pyrido[1,2-c]oxathiazine 6,6-dioxide 4a in 4% yield (entry 1, Table 1).

aUnless otherwise specified, all of the above reactions were conducted with N-sulfonyl ketimine 1a (0.2 mmol), 2a (0.26 mmol) and base (0.04 mmol, 20 mol %) in the specified dry solvent (1.0 mL) and temperature under atmospheric conditions. bAfter completion of step I, DBU (1.2 equiv) was added directly to the reaction mixture. cYield of isolated product after column chromatography. dDABCO (1.0 equiv) was used at 70 °C. eReaction was carried out using 1.0 equiv of DBU. fND = not detected.

Gratifyingly, high yields (88%) of cyclized product 4a and a trace amount of desired nicotinate 5aa (2% yield) were obtained when the reaction was conducted at 60 °C (entry 2, Table 1). By increasing the temperature as well as the loading of DABCO (1.0 equiv, entry 3, Table 1), a similar result was observed. At this situation, we surmised that step II may require a stronger base like DBU which will facilitate the aromatization process. For this purpose, DBU (1.2 equiv, entry 4, Table 1) was added to the reaction mixture at 60 °C after completion of step I. Pleasantly, 76% yield of wanted 5aa was isolated after 5 h. Attempts to optimize the reaction conditions using several solvents (THF, MeCN, DMF and DMSO) all led to lower yields (19–68%, entries 5–8, Table 1) as compared to the toluene-mediated reaction (76%, entry 4, Table 1). Next, several N/P-containing Lewis bases such as Et3N, DMAP, DBU and PPh3 were tested for this reaction in toluene and resulted in very poor yields (5–21%, entries 9–12).

Based on the above experimental results as well as our previous report on DABCO-catalyzed reactions of cyclic sulfamidate imines with MBH carbonates of isatins [75], a plausible mechanism is presented and depicted in Scheme 2. For the first step, the nucleophilic Lewis base DABCO reacts with 2a in an SN2' fashion to make a very reactive allyl ammonium intermediate 6. The latter further involves in the SN2' reaction with in situ generated carbanion intermediate 1a' forming SN2-adduct 3a. It undergoes an intramolecular aza-Michael reaction in the presence of DABCO, leading to tricyclic product 4a. For the second step, DBU (strong base) abstracts an allylic proton of 4a, followed by elimination of SO2 to give intermediate 7. Finally, the desired product 5aa is formed from 7 via aerial oxidation under open-flask conditions.

With the optimization reaction conditions in hand, we decided to explore the generality and scope of the reaction by reacting several aryl/heteroaryl-substituted MBH carbonates derived from acrylates 2a–j and 4-methyl-N-sulfonyl ketimines 1a–e under present sequential reaction conditions. The results are incorporated in Scheme 3. The regioselective allylic alkylation/aromatization reaction between 4-methyl-N-sulfonyl ketimine 1a and several aryl-substituted MBH carbonates having electron donating (Me, MeO and BnO) and withdrawing substituents (F, Br, CN and NO2) on the benzene rings proceeded smoothly under the present conditions. The results showed that electron donating substituents of MBH carbonates produced 65–73% yields of the corresponding (2-hydroxyphenyl)nicotinates 5ab–5ad which are slightly lower yields as compared to electron withdrawing ones (74–79% yields, 5ae–5ah) under identical conditions. Furthermore, heteroaryl-substituted MBH carbonates 2i and 2j also afforded 68% and 70% yields of 5ai and 5aj, respectively.

Interestingly, the coupling reaction proceeded nicely not only with N-sulfonyl ketamine 1d bearing an electron poor Br atom but also substrates 1b and 1c having electron donating substituents (Me, MeO) on the aryl rings, although the latter produced better yields than the former one. By this C–C/C–N bonds forming procedure, N-sulfonyl ketimine derived from a bulky α-naphthol moiety was found to be a suitable coupling reagent, leading to the corresponding α-naphthol-substituted nicotinate derivatives 5ea and 5ee in 71% and 74% yields, respectively.

Next, we further expanded our present methodology for the synthesis of 2-hydroxyarylated nicotinonitriles by using MBH carbonates derived from an acrylonitrile. Experimental data revealed that several aryl-substituted MBH carbonates 2k–2m underwent [3 + 3] cyclization with N-sulfonyl ketimines 1a and 1c in our established reaction conditions, resulting in good yields (68–76%) of aforesaid heterocycles 5ak–5am (Scheme 4).

In the current manuscript, a unique one-pot two-step sequential reaction of 4-methyl N-sulfonyl ketimines with MBH carbonates of acrylate/acrylonitrile catalyzed by DABCO, followed by aromatization using DBU as a base in an open-flask has been developed. This smart oxidant metal-free C–C/C–N bond forming process leads to an array of functionalized nicotinates/nicotinonitriles possessing an interesting phenolic moiety at C6 position in good to high yields. Moreover, the current process is mild enough to be applied on a broad range of functional groups. Further studies on the application of this reaction with broader substrate scope as well as the biological evaluation of the synthesized pyridines are in progress which will be documented in due course of time.

© 2018 Guin et al.; licensee Beilstein-Institut.
This is an Open Access article under the terms of the Creative Commons Attribution License (http://creativecommons.org/licenses/by/4.0). Please note that the reuse, redistribution and reproduction in particular requires that the authors and source are credited.
The license is subject to the Beilstein Journal of Organic Chemistry terms and conditions: (https://www.beilstein-journals.org/bjoc) 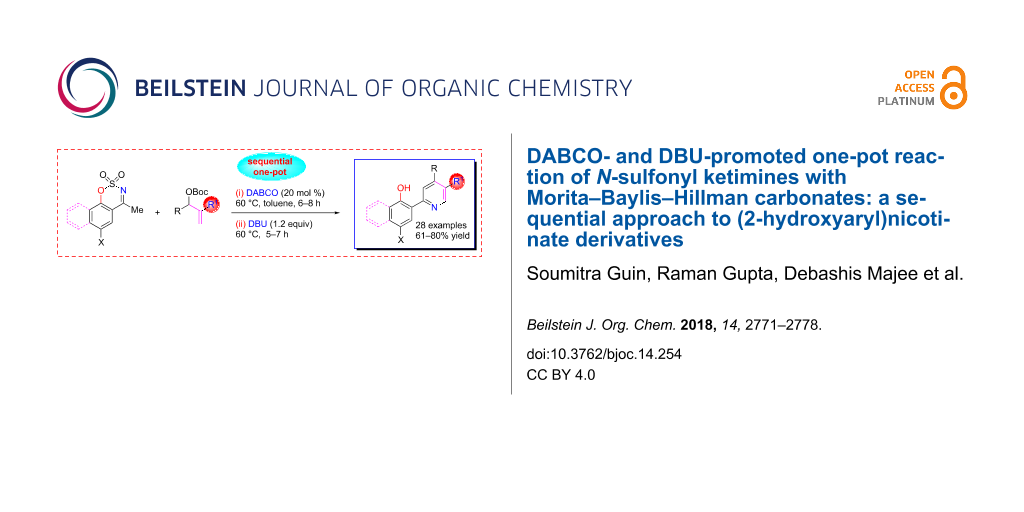