All articles from this author
Rakkappan Vishnu Priya


All articles from this author
Abdulrahman I. Almansour


All articles from this author
Raju Suresh Kumar

The syntheses of novel heterocycles through greener protocols have received a great deal of attention of the synthetic organic chemists in view of environmental concerns [1-3]. The multicomponent tandem/domino reaction is one among several green chemical protocols widely employed for the synthesis of myriad of natural products and hybrid heterocycles [4-13]. These reactions are one-pot processes involving several bond forming steps under identical reaction conditions affording the desired product in a single transformation [14-22]. Hence, multicomponent tandem reactions minimize the number of steps to synthesize complex heterocycles, avoid the isolation and purification of the intermediates, allow less waste to the environment, shorten the reaction time and are also cost effective.

Carbocyclic or heterocyclic fused pyridine derivatives are an important class of compounds omnipresent in natural products and biologically relevant synthetic compounds [23-27]. For example, imiquimod is an immune response modifier used to treat warts on the skin and certain type of skin cancer called superficial basal cell carcinoma (Figure 1) [28,29]. Loratadine is a second-generation histamine H1 receptor antagonist used to treat allergic rhinitis and urticarial [30,31]. Blonanserin is an atypical antipsychotic drug used to treat schizophrenia [32], whereas the decahydrocyclododeca[b]pyridine has been reported as inhibitors of cytochrome P450 [33]. Furthermore, muscopyridine is being used in perfume industry [34].

Among the several methods available for the synthesis of pyridines or cycloalkyl-fused pyridines [23-27,35-44], the one-pot four-component reaction of cyclic/acyclic ketones, malononitrile, aromatic aldehyde and ammonium acetate affording 2-amino-3-cyanopyridine derivatives have been explored extensively [45-55]. However, syntheses of pyridine scaffolds bearing an indole side chain have received less attention. For instance, the multicomponent reactions of aldehydes, 3-(1H-indol-3-yl)-3-oxopropanenitriles and 5-aminopyrazol or naphthylamine afforded indole substituted fused pyridine derivatives [56]. 2-Indole substituted pyridine derivatives have also been prepared through AlCl3-induced C–C bond forming reaction [57] and three-component reactions of aromatic aldehydes, 3-(1H-indol-3-yl)-3-oxopropanenitrile and malononitrile [58,59], 2-acetylpyridine [60] or 3-amino-2-enones [61]. Incidentally, the indole scaffold is found in several natural products and bioactive synthetic compounds [62-67]. For example, the synthetic drug sumatriptan used for the treatment of migraine and cluster headaches belongs to the triptan class, whereas indomethacin is a non-steroidal anti-inflammatory drug used to relieve pain, swelling and joint stiffness caused by arthritis [68,69].

Recently we reported the synthesis of pyridine/benzo-fused cyclododecanes through a four-component tandem reaction [70]. In continuation we herein report the synthesis of novel indole substituted cycloalkyl[b]pyridine-3-carbonitriles from a one-pot six-step tandem protocol involving 3-(1H-indol-3-yl)-3-oxopropanenitriles, aromatic aldehydes, cycloalkanones and ammonium acetate. This work also stems from our continuous effort in synthesizing novel cycloalkyl[b]pyridine-3-carbonitrile hybrid heterocycles via tandem/domino reaction [71,72].

Initially the precursors viz. 3-(1H-indol-3-yl)-3-oxopropanenitriles 3 were synthesized from the reaction of indoles 1 and 2-cyanoacetic acid (2) in acetic anhydride under heating conditions (Scheme 1) [73].

Subsequently the one-pot four-component reaction of 3-(1H-indol-3-yl)-3-oxopropanenitrile (3a), 4-chlorobenzaldehyde (4f), cyclododecanone (5a) and ammonium acetate (6) was chosen as a model in order to identify the optimum conditions for this reaction (Table 1). To begin with, a 1:1:1:2 mixture of the above reactants was refluxed in toluene for 4 h which led to the formation of indole–cyclododeca[b]pyridine-3-carbonitrile 7f and the intermediate (E)-3-(4-chlorophenyl)-2-(1H-indole-3-carbonyl)acrylonitrile (8) in 10 and 80% yields, respectively. Intermediate 8 was formed exclusively when the reaction was carried out in refluxing acetonitrile or isopropanol. The yield of 7f increased up to 60% in refluxing methanol. However, the same reaction in refluxing ethanol afforded solely the desired product 7f in 93% yield within 2 h (Table 1). Furthermore, after completion of the reaction as evident from the TLC, the mixture was set aside for 6 h and the resultant precipitate was filtered, washed with ethanol and dried under vacuum to obtain pure 7f without the need for additional purification methods.

This one-pot four-component strategy was then employed to synthesize twenty-three novel indole–cyclododeca[b]pyridine-3-carbonitrile hybrid heterocycles 7 by varying the 3-(1H-indol-3-yl)-3-oxopropanenitrile 3 and aromatic aldehyde 4 (Scheme 3 and Table 2). In all the cases, the reaction occurred smoothly affording excellent yields of the product 7 (85–95%). However, the reaction failed to occur with aliphatic aldehydes viz. formaldehyde, heptanal, pentanal and hexanal. The structure of all the indole–cyclododeca[b]pyridine-3-carbonitrile hybrid heterocycles 7 was elucidated by NMR spectroscopy.

Interestingly in some cases this reaction afforded the unaromatized indole–cyclododeca[b]pyridine-3-carbonitriles 12 (Table 3). These experiments were repeated thrice in order to ascertain the exclusive formation of 12. The structure of 12 was confirmed from the 1H NMR spectra, wherein the characteristic singlet around 4.6–5.1 ppm due to the 4-CH proton was observed. In addition, in the case of 12r the structure was confirmed from the single crystal X-ray studies (Figure 3) [74]. A careful analysis of the reaction progress revealed that in these reactions the corresponding product 12 precipitated from the reaction mixture within 2 h of reflux (Table 3), which was also an indication of the completion of the reaction. Further increment in the reaction time had no influence on the reaction to afford the aromatized product 7. However, in other cases (Table 2) the reaction was complete within 2 h (TLC analysis) but the product 7 precipitated after 6–8 h.

Gratified by the above results and, also to demonstrate the general applicability of this protocol, the reaction of 3-(1H-indol-3-yl)-3-oxopropanenitriles 3, aromatic aldehydes 4 and ammonium acetate (6) with lower ring-size cycloalkanones, viz. cyclooctanone (5b), cycloheptanone (5c) and cyclohexanone (5d) was investigated (Scheme 4). Under the previously established conditions, the reaction led to the formation of the respective cycloalkane-fused pyridine–indole hybrid heterocycles in excellent yields (80–95%). However, the reaction failed to occur with cyclopentanone. In total thirty-five indole–cycloalkyl[b]pyridine-3-carbonitrile hybrids 15–18 were isolated (Table 4). The structure of all the hybrid heterocycles 15–18 was elucidated using NMR spectroscopy and in the case of 16f the structure was further confirmed from single crystal X-ray studies (Figure 4) [74].

The syntheses of a library of novel indole–cycloalkyl[b]pyridine-3-carbonitrile hybrid heterocycles have been achieved through a facile one-pot four-component strategy. This reaction occurred through a six-step tandem Hantzsch-like process involving Knoevenagel–Michael–nucleophilic addition–intramolecular cyclization–elimination–oxidative aromatization sequence of reactions in a single transformation leading to the formation of two new C–N and C–C bonds. The structure of all the indole–cycloalkyl[b]pyridine-3-carbonitrile hybrid heterocycles was elucidated with the help of NMR spectroscopy and supported by single crystal X-ray studies for two compounds. The indole–cycloalkyl[b]pyridine-3-carbonitriles comprising ortho/ortho-para/ortho-meta substituted phenyl rings exhibited axial chirality due to restricted C–C single bond rotation.

R.R.K. thanks the Department of Science and Technology, New Delhi, for funds under IRHPA program for the high-resolution NMR facility and PURSE programme. The authors acknowledge the Deanship of Scientific Research at King Saud University for funding this work through the Research Grant No. RG-1438-052.

Reaction of indoles with aromatic fluoromethyl ketones: an efficient synthesis of trifluoromethyl(indolyl)phenylmethanols using K2CO3/n-Bu4PBr in water

© 2018 Muthu et al.; licensee Beilstein-Institut.
This is an Open Access article under the terms of the Creative Commons Attribution License (http://creativecommons.org/licenses/by/4.0). Please note that the reuse, redistribution and reproduction in particular requires that the authors and source are credited.
The license is subject to the Beilstein Journal of Organic Chemistry terms and conditions: (https://www.beilstein-journals.org/bjoc) 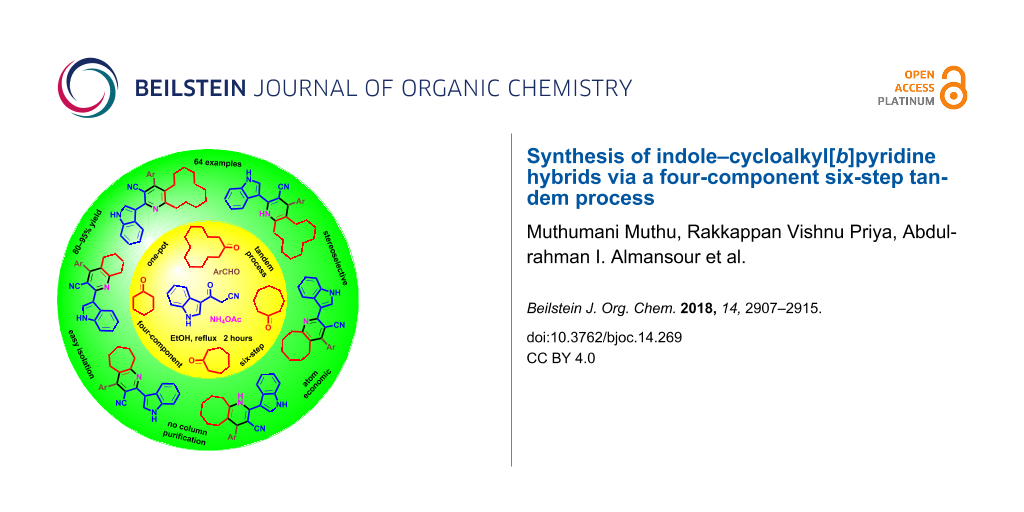