All articles from this author
Changqing Ye


All articles from this author
Munira Taj Muhammad


All articles from this author
Yajun Li


All articles from this author
Hongli Bao

A copper-catalyzed azide–alkyne cycloaddition (CuAAC) reaction for the synthesis of 1,4-disubstituted 1,2,3-triazoles from alkyl diacyl peroxides, azidotrimethylsilane, and terminal alkynes is reported. The alkyl carboxylic acids is for the first time being used as the alkyl azide precursors in the form of alkyl diacyl peroxides. This method avoids the necessity to handle organic azides, as they are generated in situ, making this protocol operationally simple. The Cu(I) catalyst not only participates in the alkyl diacyl peroxides decomposition to afford alkyl azides but also catalyzes the subsequent CuAAC reaction to produce the 1,2,3-triazoles.

The “click chemistry”, coined by K. B. Sharpless in 2001 [1], is a powerful chemical transformation that has rapidly orthogonalized traditional disciplinary boundaries. With the discovery of “click chemistry”, new fields have been opened for the research and synthesis of functionalized compounds that have applications in medicinal chemistry, drug discovery, materials chemistry, and as well as in bioconjugates [2-12].

The copper-catalyzed azide–alkyne cycloaddition (CuAAC) reaction [13-21], derived from the Huisgen’s 1,3-dipolar cycloaddition of azides and alkynes [22], has conceivably emerged as the premier example of click chemistry. Generally, organic azides are used as the azido source in most of the CuAAC reactions (Scheme 1a) [23]. However, the organic azides with low molecular weight are considered to be unstable moieties that can decompose spontaneously, with which the reactions are difficult or dangerous to handle [16]. Thus, a one-pot two-step process for the in situ generation of organic azides is highly required. A frequently used method to in situ generate organic azides is the azidation of organic halides, such as aliphatic halides, vinyl halides, or aromatic halides with sodium azide [24-27]. Organic triflates [28] and organic boronic acids [29-31] can also be used as alternative precursors for organic azides, when reacted with sodium azide.

However, sodium azide is a highly toxic compound and has the potential to explode. Azidotrimethylsilane (TMSN3) has been considered as a safer azide source, which actually has been successfully used in the CuAAC reaction directly [32-35], but rarely been used as an azido precursor to enrich the functionality of organic azide source. Moreover, as one of the most commonly appearing compounds in nature, carboxylic acids have rarely been directly used as the organic azide precursors for CuAAC reactions, considering the frequent involvement of organic halides. Thus, new methods with non or less toxic reagents and enriched organic azide sources for CuAAC reaction are still highly required.

Herein, we report a novel CuAAC reaction, using aliphatic carboxylic acids as the alkyl source [36], and TMSN3 as the azide source (Scheme 1b). Because TMSN3 can react with alkynes to form the CuAAC reaction product [32-35], there is one significant challenge of this method that need to be emphasized: how to control the reaction to generate the alkyl azides from aliphatic carboxylic acids and TMSN3, before TMSN3 directly reacting with alkynes.

Based on our unpublished work, we found that alkyl azide has always appeared as a side product when the reaction involved TMSN3 and alkyl diacyl peroxide, easily available compounds derived from aliphatic carboxylic acids. With this information in mind, initially, we started our investigation with phenylacetylene (1a), commercially available lauroyl peroxide (2a), and TMSN3 (Table 1). In a preliminary experiment, the reaction of 1a with 2a in the presence of 10 mol % of CuCl in THF at 50 °C afforded 1,4-disubstituted 1,2,3-triazole 3a in 65% isolated yield (Table 1, entry 1). Surprisingly, under these conditions no CuAAC product between TMSN3 and phenylacetylene was detected. This result encouraged us to further exploit the optimization of the reaction conditions. Afterwards, the effect of the solvent was also investigated (Table 1, entries 2−8). Dichloromethane could afford the best result and the yield of the desired product 3a could be as high as 97% (Table 1, entry 2). Other metal salts of copper, such as Cu(OAc)2, CuI, and CuBr were then examined and they showed lower catalytic efficiencies than that of CuCl (Table 1, entries 9−11). Moreover, a reduced amount of the catalyst loading leads to lower yields of product 3a (Table 1, entries 12–14).

With the optimized reaction conditions in hand, the scope of the terminal alkynes was screened and the results are depicted in Scheme 2. First, the reactivity of various substituted terminal arylalkynes was examined. Only 1,4-regioisomeric products were formed with good to excellent yields. Phenylacetylene with an electron-withdrawing bromo-, chloro-, or fluoro substituent afforded the corresponding products 3h–n in up to 92% yield, while phenylacetylenes with electron-donating groups gave the corresponding products 3b–g and 3o–q in up to 86% yield. Instead of a six-membered ring, five-membered heteroaromatics (ethynylthiophenes) have also been used, and afforded the desired products 3s and 3t in up to 76% yield. Terminal aliphatic alkynes were then examined and it was found that they could smoothly deliver the corresponding 1,2,3-triazoles 3u–z with high yields.

In order to understand the mechanism of this reaction, we performed a set of experiments (Scheme 4). Firstly a radical capturing reaction was carried out with the addition of a radical trapping reagent (tetramethylpiperdinyloxy, TEMPO) [38,39] to the standard reaction system, no product 3a was obtained; only the radical trapped product 4 was detected by GC–MS (Scheme 4a).

To further investigate this phenomenon, we synthesized a substrate bearing a cyclopropylmethyl moiety, diacyl peroxide 2p, which is a radical-clock [40,41]. The reaction of phenylacetylene with the diacyl peroxide 2p afforded a ring-opened product 3pp in 88% yield. This result suggested the engagement of radical species in the reaction (Scheme 4b).

Based on the previous literature [16,42,43] and the above experimental findings, a possible reaction mechanism is suggested as shown in Scheme 5. In the presence of the Cu(I) catalyst, alkyl diacyl peroxide decomposes into an alkyl radical, CO2, and releases a carboxyl–Cu(II) complex, which undergoes a ligand exchange with azidomethylsilane to form azido–Cu(II) species. The alkyl radical then abstracts the azido moiety from the azido–Cu(II) species to afford an alkyl azide and the regenerated Cu(I) catalyst. Then, a conventional CuAAC process delivers the desired cycloaddition product 3.

In summary, we have established an efficient, ligand- and additive-free CuAAC reaction for the synthesis of 1,4-disubstituted 1,2,3-triazoles directly from a variety of readily accessible substrates such as alkyl diacyl peroxides, azidotrimethylsilane, and terminal alkynes. The alkyl carboxylic acids are for the first time being used as the alkyl azide precursors in the form of alkyl diacyl peroxides. This method avoids the necessity to handle organic azides, as they are generated in situ, making this protocol operationally simple. This reaction features a wide substrate scope, good functional group tolerance, high yields, and excellent regioselectivity. Most of all, the Cu(I) catalyst plays two roles in the reaction: decomposes the alkyl diacyl peroxides to afford the alkyl azides and catalyzes the subsequent CuAAC reaction to produce the 1,2,3-triazoles.

General procedure: To a flame-dried Schlenk tube containing a magnetic stirring bar, terminal alkyne 1 (0.5 mmol), diacyl peroxide 2 (0.75 mmol), TMSN3 (90.4 mg, 0.75 mmol), CuCl (4.9 mg, 0.05 mmol) and CH2Cl2 (2 mL) were added, respectively. The reaction mixture was stirred vigorously for 10 h at 50 °C. Then, the reaction mixture was cooled to room temperature, poured into saturated sodium bicarbonate solution (25 mL) and extracted with CH2Cl2 (3 × 25 mL). After drying over MgSO4, the solvent was removed under reduced pressure in a rotary evaporator; the residue was purified by column chromatography on silica gel (PE/EA) to afford 3.

© 2018 Israr et al.; licensee Beilstein-Institut.
This is an Open Access article under the terms of the Creative Commons Attribution License (http://creativecommons.org/licenses/by/4.0). Please note that the reuse, redistribution and reproduction in particular requires that the authors and source are credited.
The license is subject to the Beilstein Journal of Organic Chemistry terms and conditions: (https://www.beilstein-journals.org/bjoc) 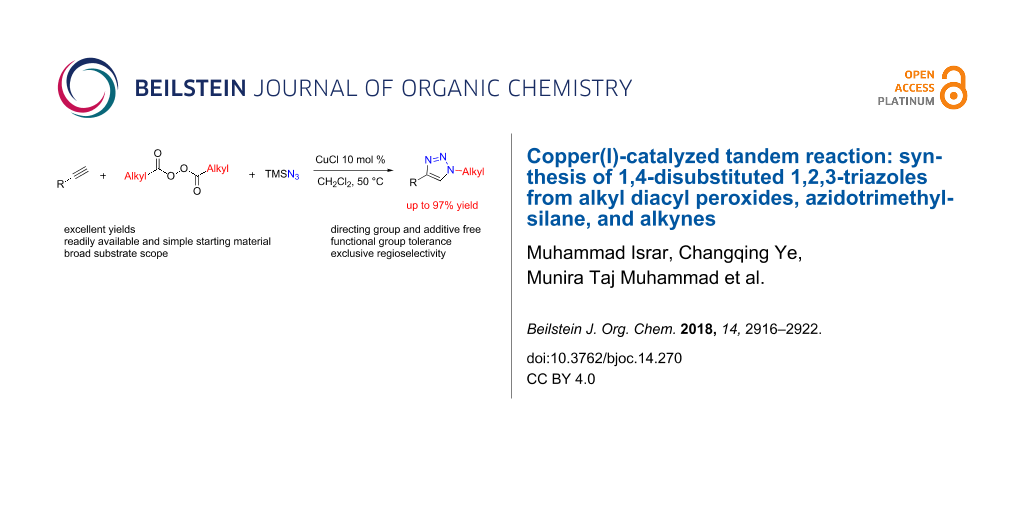