All articles from this author
Naohiko Yoshikai

Transition-metal-catalyzed, directing group-assisted arene C–H activation reactions have been extensively studied over the last few decades to offer a broad array of atom and step-economical methods for the synthesis of functionalized aromatic compounds [1-6]. Among various C–H transformations, the introduction of alkenyl groups into the ortho position of functionalized arenes has attracted significant attention because of the synthetic versatility of alkenyl groups. The C–H alkenylation has been achieved most extensively by way of the dehydrogenative Heck-type reaction of olefins [7-9]. Meanwhile, the hydroarylation of alkynes has also been explored as an alternative approach for C–H alkenylation [10]. Despite the significant progress made, each of these C–H alkenylation manifolds has some critical limitations. For example, the dehydrogenative Heck reaction is often limited to activated monosubstituted alkenes (e.g., acrylates), and is challenging with unactivated and multisubstituted alkenes [11]. The hydroarylation of alkynes does not allow for the introduction of cycloalkenyl groups because of the unavailability of the corresponding alkynes. In light of such limitations, a coupling between arene substrates and alkenyl electrophiles would offer a complementary approach for the C–H alkenylation [12]. In particular, C–H alkenylations by way of alkenyl C–O bond cleavage has attracted much attention because of the ready accessibility of the corresponding alkenyl electrophiles (e.g., acetate, phosphate) from ketones [13-17].

Over the last several years, we and others have developed a series of directed arene C–H functionalization reactions with organic electrophiles under low-valent cobalt catalysis [18-21]. In particular, our group and the Ackermann group have independently demonstrated that the combination of a cobalt–N-heterocyclic carbene (NHC) catalyst and a Grignard reagent allows for the arene C–H functionalization with organic halides and pseudohalides under the assistance of nitrogen directing groups [17,22-27]. In this connection, Ackermann developed a mild and efficient C–H alkenylation of N-pyrimidylindoles and pyrroles with alkenyl acetates using a cobalt–NHC catalyst (Scheme 1a) [17]. The same catalytic system also promoted the alkenylation using alkenyl carbamates, carbonates, and phosphates. More recently, we have achieved an N-arylimine-directed arene C–H alkenylation reaction with alkenyl phosphates using a different cobalt–NHC catalyst (Scheme 1b) [28]. Meanwhile, we have also demonstrated that pivaloyl N–H imine serves as a powerful directing group for cobalt-catalyzed arene C–H functionalization reactions such as the hydroarylation of alkenes and alkylation/arylation using organic halides [29,30]. These previous studies have prompted us to expand the scope of cobalt catalysis for the C–H alkenylation and thus to develop an ortho C–H alkenylation reaction of pivalophenone N–H imine with alkenyl phosphates using a new cobalt–NHC catalyst, which is reported herein (Scheme 1c). The present alkenylation features a mild reaction temperature and displays applicability to a variety of substituted pivalophenone N–H imines and alkenyl phosphates. It should be emphasized that pivalophenone N–H imines and related bulky N–H imines can be readily prepared from the corresponding aryl nitriles and organolithium or Grignard reagents, while analogous N-substituted imines are nontrivial to synthesize because of sluggish ketone/amine condensation. As such, the present reaction would complement the N-arylimine-directed alkenylation.

The present study commenced with screening of the reaction conditions for the coupling between pivalophenone N–H imine 1a and cyclohexenyl phosphate 2a (Table 1). Thus, the reaction was performed in the presence of CoBr2 (10 mol %), ligand (10–20 mol %), and t-BuCH2MgBr (2 equiv) in THF at room temperature. While monodentate phosphines such as PPh3 and PCy3 were entirely ineffective (Table 1, entries 1 and 2), common bulky NHC precursors such as 1,3-bis(2,4,6-trimethylphenyl)imidazolium chloride (IMes·HCl) and 1,3-bis(2,6-diisopropylphenyl)imidazolium chloride (IPr·HCl) promoted the coupling reaction to afford the desired alkenylation product 3aa albeit in moderate yields (Table 1, entries 3 and 4). No significant improvement was observed using the saturated analogues of IMes·HCl and IPr·HCl (Table 1, entries 5 and 6) or the 2,6-diethylphenyl analogue (IEt·HCl, Table 1, entry 7). Furthermore, the NHC precursor featuring a cyclohexane backbone and 2,6-diethylphenyl groups (L1·HBr), which proved to be the optimal ligand for the C–H arylation of pivalophenone N–H imine as well as for the C–H alkenylation of N-arylimine (Scheme 1a, b) [28,29], was not particularly effective for the present reaction (Table 1, entry 8). To our delight, we observed a remarkable improvement in the reaction efficiency using the benzofused analogue of IPr·HCl (L2·HCl), affording 3aa in 88% yield without any trace of a dialkenylation product (Table 1, entry 9). It should be noted that, unlike the C–H arylation of pivalophenone N–H imine and the C–H alkenylation of N-arylimine (Scheme 1a, b), the addition of TMEDA was not necessary to achieve high reaction efficiency, while the reason for this remains unclear. Note also that the present reaction could employ the relatively inexpensive diethyl phosphate, whereas, in the N-arylimine-directed alkenylation, the use of diisopropyl phosphate was necessary to achieve higher and more reproducible yields (cf. Scheme 1b) [28].

aThe reaction was performed using 0.2 mmol of 1a and 0.3 mmol (1.5 equiv) of 2a. bDetermined by GC using n-tridecane as an internal standard. cIsolated yield.

With the optimized reaction conditions in hand, we explored the scope of the present alkenylation reaction. First, various substituted pivalophenone N–H imines were subjected to the reaction with 2a (Scheme 2). Pivalophenone N–H imines bearing a series of para-substituents all participated in the alkenylation reaction to afford the desired products 3ba–ga in good yields. The reaction of m-methyl-substituted imine took place preferentially at the less hindered position to afford 3ha as the major isomer with a moderate regioselectivity of 3:1. By contrast, imines bearing m-methoxy, m-fluoro, or a 3,4-methylenedioxy group underwent exclusive alkenylation at the proximity of the functional group to afford the products 3ia–ka in good yields. As was also observed in previously reported cobalt-catalyzed ortho C–H functionalization reactions [22,23,28,29], this regioselectivity may be ascribed to the role of the oxygen or fluorine atom as a secondary directing group to have an electrostatic interaction with the cobalt center during the C–H activation. For compound 3ja, an increased acidity of the ortho position of the fluorine atom could have also contributed to the observed regioselectivity [31]. Curiously, the reaction of 2-naphthylimine resulted in the preferential alkenylation of the more hindered 1-position rather than the 3-position, with a regioselectivity of 4:1 (see 3la).

In our previous study on the C–H alkylation and arylation of pivalophenone N–H imines, we demonstrated that the pivaloyl imine readily undergoes fragmentation into a cyano group via an iminyl radical under peroxide photolysis or copper-catalyzed aerobic conditions [29]. Under the same peroxide photolysis conditions (t-BuOOt-Bu with UV (254 nm) irradiation), the ortho-alkenylated imine 3aa underwent a C–N bond-forming cyclization to afford the spirocyclic imine 4 in 81% yield (Scheme 4). The reaction likely involves the initial formation of an iminyl radical from 3aa and a tert-butoxyl radical and its intramolecular addition to the cyclohexenyl group.

On the basis of our previous studies on the N-arylimine-directed C–H alkenylation and the N–H imine-directed C–H alkylation/arylation [28,29], we are tempted to propose the catalytic cycle illustrated in Scheme 5. An alkylcobalt species A, generated from the cobalt precatalyst and the Grignard reagent, would undergo cyclometalation of magnesium alkylidene amide 1·MgX, generated from imine 1 and the Grignard reagent, to give a cobaltacycle species B while liberating an alkane R–H. The species B would then undergo a single-electron transfer (SET) to the alkenyl phosphate 2 to generate a pair of an oxidized cobaltacycle B+ and a radical anion 2•−. This would be followed by the elimination of a phosphate anion and immediate recombination of the cobalt center and the alkenyl radical to give a diorganocobalt intermediate C. The C–C-bond rotation of the radical anion 2•− or the transiently formed alkenyl radical might be responsible for the stereochemical mutation of the C=C bond observed in some cases. The reductive elimination of C and subsequent transmetalation with the Grignard reagent would furnish the alkenylation product 3·MgX and regenerate the species A. While the relationship between the ligand and the catalytic activity remains unclear, we speculate that a strong σ-donating ability of NHC ligands would facilitate the SET step among others.

In summary, we have developed an ortho C–H alkenylation reaction of pivalophenone N–H imines with alkenyl phosphates using a cobalt–NHC catalyst. The reaction takes place smoothly at room temperature and is applicable to a variety of substituted pivalophenone N–H imines and alkenyl phosphates. The NHC ligand architecture proved to have a significant impact on the efficiency of the present C–H/electrophile coupling. We anticipate that the elaboration of NHC ligands would also be instrumental to the improvement of other C–H activation and related transformations promoted by low-valent cobalt complexes [32-40].

Typical procedure: Cobalt-catalyzed alkenylation of pivalophenone N–H imine 1a with alkenyl phosphate 2a. A 10 mL Schlenk tube equipped with a magnetic stirring bar was charged with L2·HCl (9.5 mg, 0.020 mmol), CoBr2 (4.4 mg, 0.020 mmol), and THF (0.30 mL). The resulting solution was cooled in an ice bath, followed by the addition of t-BuCH2MgBr (2.0 M in THF, 0.20 mL, 0.40 mmol). After stirring for 30 min, 2,2-dimethyl-1-phenylpropan-1-imine (1a, 33 mg, 0.20 mmol) and cyclohex-1-en-1-yl diethyl phosphate (2a, 70 mg, 0.30 mmol) were added. The resulting mixture was warmed to room temperature, stirred for 12 h, and then filtered through a short silica-gel column, which was washed with ethyl acetate (5 mL). The filtrate was concentrated under reduced pressure. Silica gel chromatography (eluent: hexane/EtOAc/NEt3 50:1:1) of the crude product afforded the desired alkenylation product as a colorless oil (43 mg, 88%).

© 2018 Xu and Yoshikai; licensee Beilstein-Institut.
This is an Open Access article under the terms of the Creative Commons Attribution License (http://creativecommons.org/licenses/by/4.0), which permits unrestricted use, distribution, and reproduction in any medium, provided the original work is properly cited.
The license is subject to the Beilstein Journal of Organic Chemistry terms and conditions: (https://www.beilstein-journals.org/bjoc) 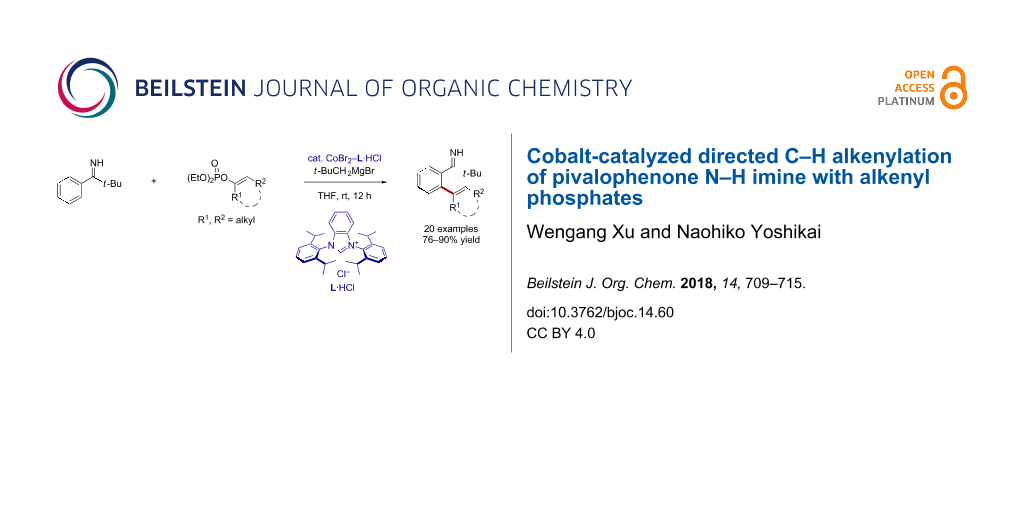