All articles from this author
Dávid Szemerédi


All articles from this author
Gyula Schneider


All articles from this author
Lilla Fekete


All articles from this author
Erzsébet Mernyák

A facile Pd-catalyzed C(sp2)–N coupling to provide a range of 2- or 4-[(subst.)phenyl]amino-13α-estrone derivatives has been achieved under microwave irradiation. The reactions were mediated with the use of Pd(OAc)2 as a catalyst and KOt-Bu as a base in the presence of X-Phos as a ligand. The desired products have been obtained in good to excellent yields. The nature and the position of the aniline substituent at the aromatic ring influenced the outcome of the couplings. 2-Amino-13α-estrone was also synthesized in a two-step protocol including an amination of 2-bromo-13α-estrone 3-benzyl ether with benzophenone imine and subsequent hydrogenolysis.

Aminoestrones are of particular interest thanks to their diverse biological applications [1-4]. There exist several aminated steroids in the literature, but the efficient generation of a C(sp2)–N bond on the aromatic ring A of estrone derivatives still remains a challenge. Aminoestrones substituted at C-2 or C-4 are mainly produced by the reduction or hydrogenation of the corresponding nitro derivatives [5]. Classical nitration methods have, however, many drawbacks concerning elevated reaction temperatures, long reaction times, and poor yields. The introduction of amino or substituted amino groups onto ring A of estrone is fascinating from both organic chemical and biological points of view. Certain ring A-aminated estrone derivatives are described as inhibitors of estrogen biosynthesis. They are often synthesized via a three-step method including nitration, reduction, and functionalization of the amino group [1,2]. This three-step protocol may be simplified to involve only one or two steps by the application of a Pd-catalyzed Buchwald–Hartwig amination. In recent years, extensive efforts have been made on the Pd(0)-catalyzed amination of aryl halides or triflates in order to achieve the efficient synthesis of substituted anilines [6-9]. Buchwald et al. stated that the Pd source is determining in the amination step [9]. They also found that X-Phos is an outstanding ligand with increased activity and stability compared to those based on BINAP [10].

There are a number of literature methods with respect to microwave-assisted Buchwald–Hartwig couplings [11-13]. Many publications have reported remarkable advantages of microwave-assisted syntheses, including shorter reaction times, higher yields and chemoselectivity [14-16].

Concerning the aromatic ring A of estrone, the Pd-catalyzed Buchwald–Hartwig amination was carried out exclusively at position C-3, starting from the 3-triflate derivative [17,18]. The C(sp2)–N cross-coupling of the triflate was achieved with benzophenone imine or benzylamine. The removal of the protecting groups resulted in 3-aminoestrone in high yields. Schön et al. developed two convenient protocols for the preparation of 3-aminoestrone using Pd(OAc)2 and Pd2(dba)3 as catalysts, X-Phos as a ligand, Cs2CO3 as a base in toluene or DMF solvent under thermal heating or microwave irradiation [18].

We recently described halogenations [19] and Sonogashira couplings on ring A of 13α-estrone and its 3-methyl ether [20]. The 13-epimer of natural estrone is a non-natural C-18 steroid containing cis junction of rings C and D [21,22]. This core-modified compound differs from its natural 13β counterpart not only in the configuration of C-13, but also its more flexible conformation. Poirier et al. investigated the in vitro and in vivo estrogenic activity of 3,17-estradiol derivatives of 13α-estrone [23]. The 13-epimers were shown to exhibit no significant binding affinity for estrogen receptor alpha and display no uterotropic activity. Nevertheless, certain 13α-estrone derivatives possess important biological activities including antitumoral effect [24-27]. Thus 13α-estrone is a suitable compound for the development of biologically active steroids lacking estrogenicity. Literature reveals that besides the inversion of C-13, the introduction of an amino group onto C-2 or C-4 of estrone also leads to significant decreases in its binding affinity for nuclear estrogen receptors (ERα and ERβ) [28]. Certain derivatives of 2- or 4-aminoestrone or their 3-methyl ether possess diverse biological activities, including enzyme inhibitory or antiproliferative properties [1-3,29,30]. The 17β-HSD1 enzyme is responsible for the reduction of estrone into 17β-estradiol, which may enhance the proliferation of tumor cells [31]. Effective inhibition of 17β-HSD1 may result in an antitumor effect in hormone-dependent cancers [32]. It is known that several 2- or 4-substituted estrone derivatives possess substantial 17β-HSD1 inhibitory action [19,20,33]. The presence of a large lipophilic group on C-2 of estrone was found to be advantageous concerning the 17β-HSD1 inhibitory activity [33]. Chin et al. reported that 2-bromoacetamidoestrone 3-methyl ether inhibits the 17β-HSD1 enzyme in an irreversible manner [1]. Nevertheless, we proved that certain 4-halogenated 13α-estrone 3-methyl ethers are also effective inhibitors [19]. Recently, we carried out the Pd-catalyzed C–C coupling of 2- and 4-iodo-13α-estrones as well as their 3-methyl ethers with p-substituted phenylacetylenes as terminal alkyne partners under microwave irradiation [20]. The regioisomerism markedly influenced the reaction conditions. 2-Iodo isomers were transformed using Pd(PPh3)4 catalyst and CuI as a cocatalyst. Reactions of the 4-iodo counterparts could be achieved by changing the catalyst to Pd(PPh3)2Cl2 and using higher temperature. Additionally, the 2- or 4-phenylethynyl derivatives were partially or completely saturated in order to get stereochemically different compounds for structure–activity determinations. The saturated derivatives contain a phenyl moiety at C-2 attached through an ethenediyl or ethanediyl linker. Of the synthesized 2- and 4-regioisomers, solely the 2-counterparts bearing a 3-OH group exhibited a substantial inhibitory effect against the 17β-HSD1 enzyme. Surprisingly, the enzyme inhibitory action did not depend on the hybrid state of carbon attached to C-2. From the pharmacological point of view it would be interesting to synthesize and investigate such 13α-estrone derivatives, bearing a lipophilic phenyl group attached to C-2 through an amino linker.

In continuation of our studies with respect to cross-coupling reactions on ring A of 13α-estrone, here we disclose the development of a Pd-catalyzed C(sp2)–N coupling methodology for the transformation of 2-bromo- and 4-bromo-13α-estrone 3-methyl (1 or 3) as well as 3-benzyl ethers (2 or 4) with aniline or substituted anilines as reagents. To the best of our knowledge, there are no literature reports concerning the Pd-catalyzed 2- or 4-amination of the estrane core.

Based on recent literature results [18,20], we started to optimize the reaction conditions for the transformation of 2-bromo-13α-estrone 3-methyl ether (1) with aniline (Table 1). Since the Pd source has been shown to be crucial in the amination step, two Pd catalysts were investigated. Namely, Pd(OAc)2 and Pd2(dba)3 were used in the presence of X-Phos or BINAP as ligands. The literature data influenced the selection of the base. The arylation of anilines, escpecially of unsubstituted ones with o-bromoanisoles requires stronger bases such as NaOt-Bu or KOt-Bu [34-38]. This is due to the deactivated, electron-rich nature of anisoles induced by the electron-donating methoxy group. Taking into account the above-mentioned observations [18,34-38], couplings were performed in the presence of DBU, NaOt-Bu, KOt-Bu or Cs2CO3 as the base. Toluene was chosen as a solvent, and the reactions were carried out under microwave irradiation or thermal heating. The solvent was selected on the basis of literature data reported for other Pd-catalyzed reactions of estrone derivatives [18,20]. The pre-stirring of the reaction mixture without adding the aryl halide 1 was carried out at 60 °C for 5 min in a water bath, then aryl halide 1 was added and the mixture was irradiated in a microwave reactor at 150 °C for 10 min. The outcome of the couplings greatly depended on the nature of the Pd source, the ligand and the base.

In order to compare the efficiency and reaction time of thermal heating with microwave-irradiation conditions, all reactions of 1 with aniline were performed under both conditions (Table 1, entries 1–18). As seen in Table 1, similar yields might be achieved, but reaction times differ considerably (10 min vs 24 h).

On the basis of the optimization procedure discussed above, we selected microwave-assisted conditions at lower temperature (Table 1, entry 3) for further transformations.

With the best reaction conditions in hand, the couplings at C-2 of starting compound 1 were extended to monosubstituted anilines bearing electronically different substituents at o, m or p positions (Scheme 1).

As indicated in Scheme 1, all couplings proceeded with high yields. The best yields were achieved with nitroanilines, irrespective of the position of the nitro group. Reaction of methylanilines led to slightly lower yields, indicating that the presence of the electron-donating methyl group is less advantageous over the electron-withdrawing nitro function. The coupling at C-4 of compound 1 with aniline under the same conditions yielded aminated derivative 10 in high yield.

With an attempt to investigate the influence of the size of the 3-ether group, 2- or 4-bromo isomers of 3-benzyl ethers 2 or 4 were also submitted to C(sp2)–N couplings with aniline using the procedure elaborated above. Irrespective of the more bulky nature of the benzyl ether group compared to its methyl counterpart, compounds 2 and 4 were successfully aminated affording derivatives 6 and 11 without the need of changing the reaction conditions established for couplings at C-2.

The structures of the newly synthesized phenylamino derivatives 5–13 were established through 1H, 13C, HSQC and/or HMBC measurements.

In conclusion, we have developed a convenient microwave-assisted one-step protocol for the facile and efficient preparation of 2- and 4-phenylaminoestrones 5–11. Our method affords the desired products in short reaction times in good to excellent yields. Thanks to the elaborated mild coupling procedure, the synthesis of 2-amino-13α-estrone 13 could be achieved in only two steps without the first, aromatic nitration step used extensively earlier. The newly synthesized amino derivatives of 13α-estrone 5–13 may possess important biological activities without hormonal effect.

The work of Erzsébet Mernyák in this project was supported by the ÚNKP-17-4 „New National Excellence Program of the Ministry of Human Capacities”. This work was supported by National Research, Development and Innovation Office-NKFIH through projects GINOP-2.3.2-15-2016-00038 and OTKA SNN 124329.

© 2018 Bacsa et al.; licensee Beilstein-Institut.
This is an Open Access article under the terms of the Creative Commons Attribution License (http://creativecommons.org/licenses/by/4.0), which permits unrestricted use, distribution, and reproduction in any medium, provided the original work is properly cited.
The license is subject to the Beilstein Journal of Organic Chemistry terms and conditions: (https://www.beilstein-journals.org/bjoc) 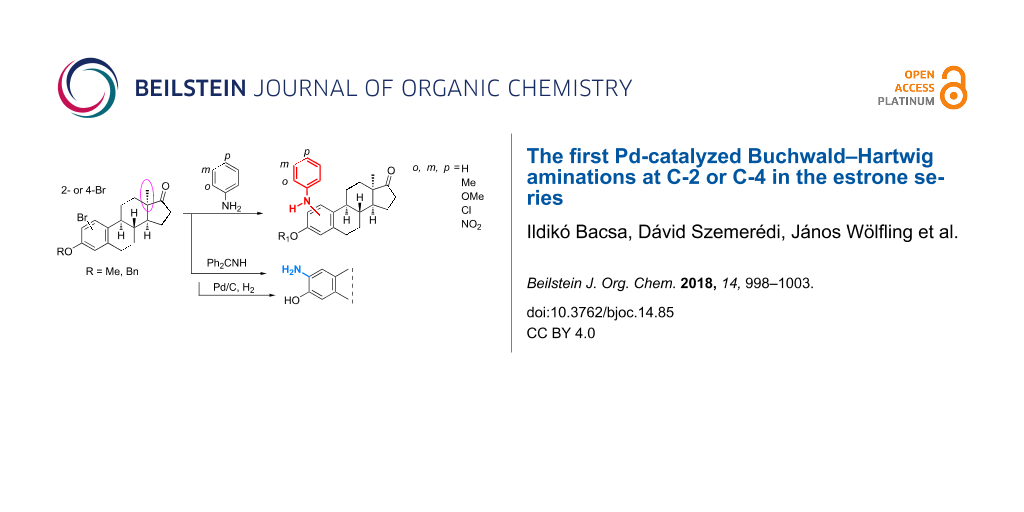