All articles from this author
Mana Mohan Mukherjee


All articles from this author
Rina Ghosh

Streptococcus pneumonia (SPn) is a Gram-positive bacterium which causes life threatening diseases. The bacteria protect themselves against non-specific host defence by an external polysaccharide (PS) capsule which bears a repeating unit, α-D-Galp(1->3)-α-D-Glcp(1->3)-α-L-Rhap(1->3)-D-Rib (SPn 6A). A closer look at the structure reveals the presence of α-linked galactose and glucose residues. The synthesis of these 1,2-cis glycosidic linkages are considered challenging particularly in the context of a one-pot oligosaccharide synthesis. We have synthesized the aforesaid tetrasaccharide (SPn 6A) based on both stepwise and sequential one-pot glycosylation reactions using easily accessible common building blocks; eventually similar overall yields were obtained in both cases.

Complex glycans serve as attractive targets for carbohydrate-based vaccines and therapeutics [1-3]. Streptococcus pneumonia (SPn) has been posing a serious threat in recent times. It is a major cause of pneumonia, bacteraemia, and meningitis in immune-compromised patients, elderly and children. A UNICEF/WHO survey has estimated that 920136 children died of pneumonia in 2015 accounting for 16% of all fatalities under the age of five [4]. Out of over 90 serotypes that have been reported for SPn [5,6], serogroup 6 has been ranked among the most important causes of invasive pneumonococcal diseases [7]. These facts have led to extensive research towards the establishment of polysaccharide structures associated with the SPn serogroup 6 [8,9] (Figure 1).

Initially, it was thought that due to their similar carbohydrate core structures the antibodies elicited by SPn 6A would be effective against SPn 6B as well [10-13]. But recent studies have shown that serotype specific immune responses are elicited by the antibodies and that they cross react slowly [14]. As a result the importance of the presence of the capsular polysaccharide of SPn 6A in multicomponent vaccines like Pneumovax® has been recognized [15]. The low hydrolytic stability of the phosphodiester linkages in the clinical isolates of the SPn 6A polysaccharides poses a major drawback as it leads to low bioavailability [16]. Hence, the requirements of pure SPn 6A conjugate in proper amounts for future vaccine development can only be met via chemical synthesis. Therefore, a number of syntheses targeting the SPn 6A tetrasaccharide has been reported in literature. Initial reports of a linear synthesis were made by Vliegenthart et al. in the nineties [17-21]. After this, the Demchenko group improved these early reports with a convergent approach using glycosyl thioimidates as complementary glycosyl donors with respect to thioglycosides [22-25]. Herein, we wish to report synthetic routes to the SPn 6A tetrasaccharide via stepwise as well as one-pot sequential glycosylation strategies.

Keeping in mind our objective to synthesize the SPn 6A tetrasaccharide following stepwise as well as one-pot synthetic strategies based on common building blocks, a retrosynthetic analysis was made which led us to galactose-based donor 2 [26], ribitol-based acceptor 7 [22] and a gluco-rhamno-based disaccharide (3a/3b) to contemplate the synthesis of the tetrasaccharide derivative 1 (Figure 2).

The disaccharides (3a/3b) can be synthesized from their parent monomeric units 6a/6b/6c and 5 [27]. To ensure high α-selection during the formation of the central gluco-rhamno disaccharide the benzylidene protected glucosyl donor (Figure 2) was selected, because the induction of the 1,2-cis selectivity in benzylidene-protected substrates via torsional/electronic effects have already been recognized [28].

The galactosyl trichloroacetimidate donor 2 was prepared following literature procedures [26]. On the other hand the D-glucosyl thioglycoside 8 was converted to the known benzylidene derivative 9 [29,30] according to our previously reported procedure. Benzylation of 9 under phase-transfer conditions led to 10 [31] in 49% yield (Scheme 1). Subsequently, 10 was subjected to naphthylmethylation/p-methoxybenzylation [32] with 2-(bromomethyl)naphthalene (NapBr)/p-methoxybenzyl chloride in DMF to afford 6a/11 [32] in 90% and 80% yields, respectively.

These derivatives were next subjected to thioglycoside hydrolysis using trichloroisocyanuric acid (TCCA) [33] in wet acetone which provided 12a/12b [34] in 85% and 89% yields, respectively. These were finally converted to their corresponding trichloroacetimidate 6b/6c [34] (Scheme 1) with yields of 93% and 90%, respectively.

The L-rhamnosyl thioglycoside 14 [29,30], prepared from L-rhamnose (13), was deacetylated quantitatively in the presence of Et3N/MeOH/H2O [35], and then stannylene-mediated selective naphthylmethylation at the O-3 position was carried out to give the known derivative 15 in 82% yield [36]. This was next benzoylated almost quantitatively to give 16. Finally DDQ-mediated deprotection of the naphthylmethyl group gave the acceptor 5 [27] in 83% yield (Scheme 2).

For acceptor 7 (Figure 2) ribitol 17 was converted to its corresponding diisopropylidene derivative 18 [37] in the presence of dimethoxypropane and pTSA in acetone. Treatment with NapBr and NaH in DMF gave compound 19 in 93% yield. Subsequent deprotection of isopropylidene ketal with pTSA/MeOH (aq) and then benzylation furnished 20 in 95% yield over two steps. Deprotection of the naphthylmethyl group in the presence of DDQ in aqueous dichloromethane (19:1) gave the glycosyl acceptor 7 [22] in 85% yield (Scheme 3).

In order to construct the central disaccharide fragment 3 in high yield with 1,2-cis selectivity, several glycosylation reactions using glucosyl donors 6a/6b/6c/12a and rhamnosyl acceptor 5 were contemplated. None of the conditions, based on the use of thioglycoside 6a as the glycosyl donor and separately, BSP/Tf2O (Table 1, entry 1) or Ph2SO/Tf2O (Table 1, entry 2) as the corresponding activators, or based on 1-hydroxy donor 12a and Ph2SO/Tf2O (Table 1, entry 3), could furnish any desired result. After trying with the mentioned donors, and reagent combinations (Table 1), we switched over to utilize trichloroacetimidate donors (6b, Table 1, entries 5 and 6, and 6c, entry 4); the TMSOTf mediated glycosylation in DCM/Et2O solvent (Table 1, entry 6) was found to be effective in case of donor 6b and acceptor 5 which generated the desired disaccharide 3a in high yield and exclusive α-anomeric selectivity (evidenced from NMR). We presume that this near exclusivity in α-selection may be due to the synergistic effect from the 4,6-O-benzylidene group, which is a good promoter for 1,2-cis glycosylation in galactose-based systems [38], as well as the steric crowding caused by the bulky 3-O-naphthylmethyl group at the β-side of the ring. Having obtained the central disaccharide 3a in requisite yield and excellent stereochemical purity we now proceeded towards the synthesis of the trisaccharide fragment 21 (Scheme 4).

aIsolated yields of products; bBSP = benzenesulfinylpiperidine; ccorresponding glycosylation procedure (see Supporting Information File 1); dstarting material was decomposed; edonor was decomposed but acceptor was recovered; fa complex mixture was formed from which the desired disaccharide could not be purified by column chromatography.

Having standardized a stepwise synthesis of the tetrasaccharide 1 in the protected form we then turned our attention to devise a one-pot protocol to achieve the same derivative. The one-pot synthesis of this target is particularly challenging because of the presence of the two 1,2-cis glycosidic linkages which are likely to make product isolation particularly difficult at the end of the glycosylative protocol. Assuming equal preference of formation for each and every possible diastereomer across the three glycosylation steps a mixture of 8 different diastereomers may be formed if the four monomers are sequentially added in a (1 + 1 + 1 + 1) one-pot strategy. However, the number of possibilities may be reduced to 4 isomers by using a participating group on the rhamnose residue to induce near exclusive α-selectivity in the last step. Further reduction can be ensured by incorporating a (1 + 2 + 1) approach where the number of possible diastereomers becomes 2. So, we selected this (1 + 2 + 1) glycosylation for our synthesis.

Two different strategies were attempted in this direction. Recently, Mong et al. have reported high α-selectivity in the formation of glucan and galactan under non-participating conditions from the O-2 protecting group [39,40]. With this method, we tried to couple donor p-tolyl 2,3,4,6-tetra-O-benzyl-1-thio-β-D-galactopyranoside (22) with acceptor 4 using a NIS/TMSOTf combination in the presence of DMF acting as a modulating solvent (inset, Scheme 5). Unfortunately, when this strategy was applied to our case it could not produce a viable result. So we switch to the conventional orthogonal strategy for a one-pot synthesis of the targeted tetrasaccharide (Scheme 5).

The disaccharide acceptor 4 was glycosylated with galactosyl trichloroacetimidate donor 2 at −15 °C using 30 mol % of TMSOTf. After full consumption of the starting materials (TLC), into the same pot the second acceptor 7 followed by NIS were added. The reaction mixture was allowed to reach −10 °C before another 30 mol % of TMSOTf were added; TLC after 45 minutes showed complete consumption of the starting materials. Thus the targeted tetrasaccharide derivative was prepared via a three component, one-pot sequential glycosylation technique in 52% yield (Scheme 5). It is to be noted that the temperature had to be raised to −10 °C from −20 °C in the second step of the one-pot protocol. This was necessary to improve the overall yield of the final product. The tetrasaccharide derivative 1 was next deprotected under Zemplén conditions [41], followed by hydrogenation with H2/Pd-C in EtOH/EtOAc/AcOH solvent to give the deprotected tetrasaccharide 23 in 85% yield over two steps.

Summarizing our work we have achieved stepwise and sequential one-pot syntheses of the tetrasaccharide repeating unit of SPn 6A via an orthogonal glycosylation strategy using commonly used trichloroacetimidate and thioglycoside donors. The challenging 1,2-cis linkages could be prepared with a yield and a selectivity which were high enough to allow the one-pot synthesis.

RG acknowledges the SERB, DST (Scheme No. SR/S1/OC-61/2012), India for financial support. AC and MMM are thankful to the CSIR and UGC, India, respectively, for providing senior research fellowships.

© 2018 Chaudhury et al.; licensee Beilstein-Institut.
This is an Open Access article under the terms of the Creative Commons Attribution License (http://creativecommons.org/licenses/by/4.0), which permits unrestricted use, distribution, and reproduction in any medium, provided the original work is properly cited.
The license is subject to the Beilstein Journal of Organic Chemistry terms and conditions: (https://www.beilstein-journals.org/bjoc) 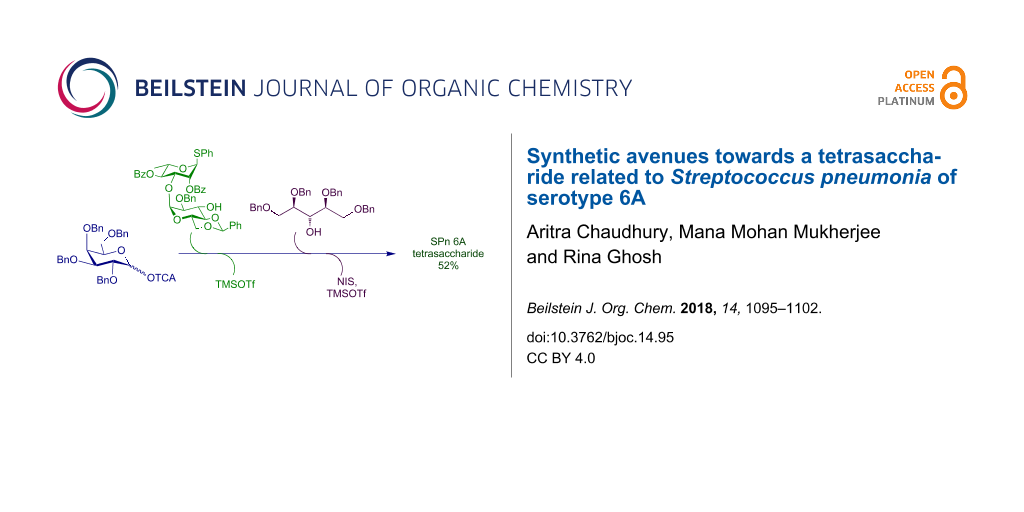