All articles from this author
Julia L. Piterskaya


All articles from this author
Nataly I. Svintsitskaya


All articles from this author
Albina V. Dogadina

Due to the high polarization of the push–pull triple bond, haloacetylenes show high reactivity in nucleophilic substitution reactions. Our systematic studies of the reactions of chloroethynylphosphonates with various nucleophilic reagents have recently revealed a new direction of this reaction when using C,N-, N,S- and N,N-dinucleophiles. It is characterized by a selective 5-endo-dig cyclization to the corresponding five-membered rings. The obtained new compounds are of special interest due to the practical utility of the formed fused heterocycles, such as indoles [1], thiazolo[2,3-b][1,3,4]thiadiazole [2], and benzo[4,5]imidazo[2,1-b]thiazole [3], as well as due to the simultaneous presence of a biologically active phosphorus function in the molecules. Recently, we have shown that the reaction of chloroethynylphosphonates with 2-aminopyridines proceeds through a 5-endo-dig cyclization to form imidazo[1,2-a]pyridines [4]. In continuation of this study, herein we report an effective approach to the synthesis of new phosphonylated triazolopyridine derivatives by reacting chloroethynylphosphonates with 2-hydrazinylpyridines. The triazolopyridine ring is a structural fragment that is present in a number of drugs and [1,2,4]triazolo[4,3-a]pyridines were shown to have herbicidal [5,6], antifungal [7], neuroprotective [8,9] and antibacterial activity [10]. In addition, [1,2,4]triazolopyridine has been used as electron-acceptor unit in the synthesis of organic light emitting diodes (OLED) [11].

2-Hydrazinylpyridines (a) and pyridinylhydrazones (b), as well as their acylated derivatives (c), are versatile scaffolds for the preparation of triazolopyridines (Scheme 1). The known methods for the [1,2,4]triazolopyridine ring formation use various condensation agents such as HCOOH, orthoesters, Lawesson’s reagent, hypervalent iodine reagents, etc.

The synthetic methods towards diverse [1,2,4]triazolo[3,4-a]pyridines have been reviewed in detail [12,13]. It should be noted that the use of acetylene species to create this heterocycle (including triazole ring) is presented only by few examples. There has been reported one method for the formation of a [1,2,4]triazolo[4,3-a]pyridine ring with participation of an acetylene triple bond; an oxidative cyclization during the reaction of terminal phenylacetylenes with 2-hydrazinylpyridines [14]. However, data on phosphorus-containing triazolopyridines are scarce, although the phosphoryl fragment widens the range of practical applications of such compounds. In this regard, Marchenko and co-workers [15] have reported the direct P(III)-phosphinylation of [1,2,4]triazolopyridines. The introduction of chlorethynylphosphonates in reactions with 2-hydrazinylpyridines allows to obtain methylphosphonylated triazolopyridine derivatives. Unlike our previous studies, in this case the reaction occurs through a 5-exo-dig-type cyclization.

The structures of [1,2,4]triazolo[4,3-a]pyridines 3–8 were confirmed by IR, 1Н, 13C and 31P NMR spectroscopy. Chemical shifts of the phosphorus nucleus for compounds 3–8 were registered in the range of δP 22–23 and 18–19 ppm for dimethyl а and diisopropyl phosphonates b, respectively. In the 1Н NMR spectra of products 3–8, the methylene unit was recorded as a doublet signal (δH 3.42–4.19 ppm) with a spin–spin coupling constant of 2JНР ≈ 20 Hz. In the 13С NMR spectra, the methylene carbon resonated as a doublet at δ 23.5 ppm (JCP = 143 Hz). In addition, the structures of triazolopyridines 3–8 were unambiguously confirmed by the crystal structure of 5b.

Remarkably, the presence of a nitro group in the pyridine ring of the starting 2-hydrazinylpyridines 1i and 1j significantly violates the reaction selectivity, leading to a rapid resinification of the reaction mixture. However, the exclusion of potassium carbonate allows the reaction to proceed selectively within 150 hours at a temperature of 60 °C. The reaction time could be reduced to 30 hours at reflux temperature. It should be noted that in this case the reaction led to the formation of 2 isomers one of which (9, 10) is analogous to the [1,2,4]triazolo[4,3-a]pyridines 3–8 described above. The formation of another isomer 11, 12, is due to the Dimroth-type rearrangement, which is facilitated by the acceptor nitro group in the pyridine ring (Scheme 3) [17,18].

The reaction of 2-hydrazinyl-3-nitropyridine (1i) with dimethyl and diisopropyl chloroethynylphosphonates 2a and 2b proceeded selectively to furnish only [1,2,4]triazolo[1,5-a]pyridines 11. The ease of the formation of isomers 11 in this case and 12 in other similar synthesis, is caused not only by the presence of a nitro group in the pyridine ring, but also by the presence of hydrogen chloride, which is eliminated by potassium carbonate in the former experiments (Scheme 2). The acid-promoted Dimroth rearrangement has been previously reported by Potts et al. [19].

In contrast, the reaction of 2-hydrazinyl-5-nitropyridine (1j) with chloroethynylphosphonates at a temperature of 60 °C for 50 hours led to the formation of a mixture of isomers 10 and 12 in a ratio of ≈1:1. Boiling the reaction mixture after the complete conversion of chloroethynylphosphonate promotes a Dimroth-like rearrangement of [1,2,4]triazolo[4,3-a]pyridine 10 into [1,2,4]triazolo[1,5-a]pyridine 12 completely (Scheme 4).

Similar transformations have been observed in the reactions of 2-hydrazinylpyridines with ethyl imidates in the presence of 1.5 equiv of acetic acid [20]. When using highly electron-deficient 2-hydrazinopyridines, the [1,2,4]triazolo[4,3-a]pyridines obtained were converted into [1,2,4]triazolo[1,5-a]pyridines.

In the 31P NMR spectra the chemical shifts of the phosphorus nuclei in 13 and 14 are observed in the 18.40–22.75 ppm region. The 1H NMR spectra contain characteristic doublet signals of the methylene group in the phosphoryl unit resonating at 3.75–4.19 ppm with 2JHP = 20 Hz. At lower field, the signals of 6 protons of the (iso)quinoline rings are present at 7.1–8.7 ppm. In the 13C NMR spectra, the methylene and methine carbons of the triazole ring resonate as doublet signals with characteristic constants of spin–spin interaction with the phosphorus nucleus at 23.43–28.99 ppm (1JСР = 143 Hz) and 53.5–72.1 ppm (2JCP = 7 Hz), respectively. In addition, the structure of phosphonate 14b was unambiguously proved by single crystal X-ray diffraction analysis.

Probably, the reaction proceeds through the nucleophilic substitution of chlorine in the chloroethynylphosphonate to form ynamine intermediate A, isomerization of which provides ketenimine B. Further formation of the imine tautomer C enables an intramolecular 5-exo-dig cyclization to furnish the title [1,2,4]triazolo[4,3-a]pyridines (Scheme 6).

We gratefully acknowledge financial support from the Russian Foundation for Basic Research (Grant no. 19-03-00365) and the Ministry of Education and Science of the Russian Federation (project no. 4.5554.2017/8.9). This research made use of resources from the Engineering Center of Saint-Petersburg State Institute of Technology, the Center for Chemical Analysis and Materials, and the Center for X-ray Diffraction Methods of Saint-Petersburg State University.

© 2019 Krylov et al.; licensee Beilstein-Institut.
This is an Open Access article under the terms of the Creative Commons Attribution License (http://creativecommons.org/licenses/by/4.0). Please note that the reuse, redistribution and reproduction in particular requires that the authors and source are credited.
The license is subject to the Beilstein Journal of Organic Chemistry terms and conditions: (https://www.beilstein-journals.org/bjoc) 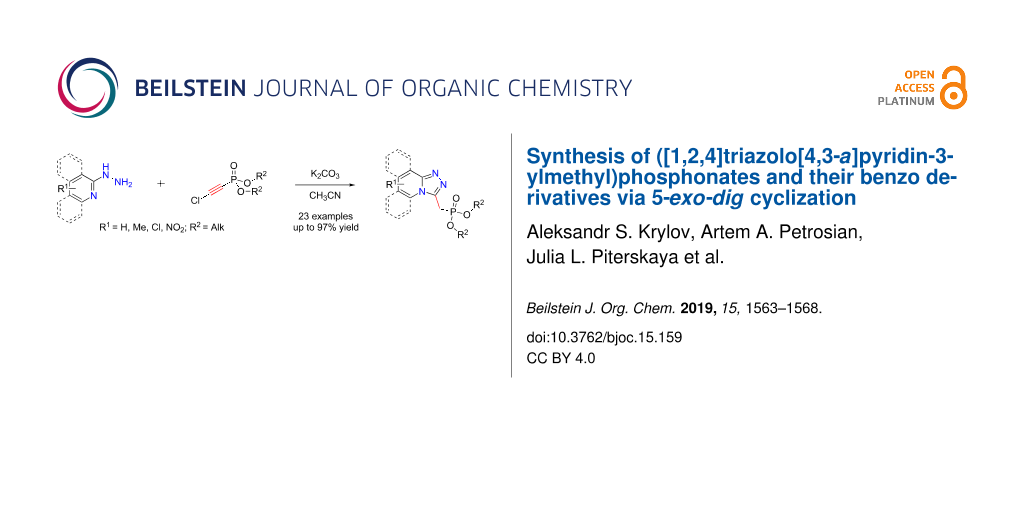