All articles from this author
Natalya A. Gerasimova


All articles from this author
Nikolay V. Kungurov


All articles from this author
Gennady L. Rusinov


All articles from this author
Oleg N. Chupakhin


All articles from this author
Valery N. Charushin

A series of novel [1,2,4]triazolo[1,5-b][1,2,4,5]tetrazines has been synthesized through oxidation reaction of the corresponding 3,6-disubstituted 1,2,4,5-tetrazines bearing amidine fragments. It is shown that the heterocyclic systems obtained can be modified easily at C(3) position in the reactions with aliphatic alcohols and amines. Also, the reactivity of [1,2,4]triazolo[1,5-b][1,2,4,5]tetrazines towards CH-active compounds has been studied. The obtained triazolo[1,5-b]annulated 1,2,4,5-tetrazines proved to be active in micromolar concentrations in vitro against filamentous anthropophilic and zooanthropophilic dermatophyte fungi (Trichophyton, Microsporum and Epidermofiton), which cause skin and its appendages (hair, nails) diseases.

Azolo-annulated azines can be regarded as purine isosteres and are of great interest for modern medicinal chemistry as potential biologically active compounds. In particular, imidazo[1,2-a]pyridines and imidazo[1,2-a]pyrimidines exhibit a wide spectrum of biological activity, including antiviral and antibacterial ones [1,2].

A promising approach for the development of new drugs is the synthesis and bioscreening of high nitrogen-containing azoloazines, including azolo-annulated tetrazines. These compounds, bearing a large number of heteroatoms in their structures, have additional opportunities for non-covalent bonding with a variety of biological targets. In addition, a high electrophilic character of the tetrazine ring can provide chemical binding to pathogenic objects, thus leading to a disturbance of their functions.

1,2,4,5-Tetrazine derivatives have been actively studied in recent years [19-22]. These compounds are attractive as high-energy materials [23-25], molecules with promising photophysical, electrochemical and coordination properties for use in sensors, OLEDs, semiconductor materials, etc. [26-28]. The most important biomedical application of 1,2,4,5-tetrazines are bioorthogonal reactions that allow labeling proteins and visualizing cancer due to the ability of s-tetrazine to fast and biocompatible ligation with alkenes via the inverse electron demand Diels–Alder reactions [29-31].

Therefore, the development of methods for the synthesis and modification of new triazolo[1,5-b][1,2,4,5]tetrazines can be considered as an attractive task for heterocyclic and medicinal chemistry.

The synthetic approach to new triazolotetrazines involves the preparation of 3,6-disubstituted 1,2,4,5-tetrazines 2a–i bearing the amidine moiety through nucleophilic substitution of the 3,5-dimethylpyrazol fragment in easily available compound 1, followed by oxidative cyclization of products 2a–i (Scheme 2).

It has been shown that the oxidative cyclization of 1,2,4,5-tetrazines 2a–i into triazolo[1,5-b][1,2,4,5]tetrazines 3a–i takes place by action of (diacetoxyiodo)benzene on heating in trifluoroethanol. The target products were obtained in 10–86% yield. According to TLC data, the synthesis of derivatives containing 4-methylphenyl (3e), phenyl (3b) and 4-chlorophenyl (3d) substituents proved to be accompanied by the formation of a large number of byproducts of unknown structure, thus decreasing the yield to 15–30%. The yield of triazolotetrazine 3i unsubstituted at C(7) was only 10%. It can be explained by a low stability of the starting tetrazine 2i containing the formamidine moiety, since the latter on heating is easily transformed into the amino group, thus leading to 3-amino-6-(3,5-dimethylpyrazol-1-yl)-1,2,4,5-tetrazine. It has been found that N-bromosuccinimide can also be used as an oxidant for the oxidation of benzamidine derivatives 2b,c in acetonitrile under microwave irradiation. Along with the cyclization reaction, bromination of the pyrazole ring proved to occur at position C(4) to give the products 3j,k, as evidenced by disappearance of the characteristic singlet of H(4) of the pyrazolyl substituent in the region of 6.38–6.41 ppm in the 1H NMR spectrum. A small amount of N-(6-(4-bromo-3,5-dimethylpyrazol-1-yl)-1,2,4,5-tetrazin-3-yl)benzamide, as a byproduct, was isolated from the reaction mixture, the structure of the latter was confirmed by the XRD data (Figure 1).

In order to select optimal conditions for the synthesis of compounds 3, the oxidative systems have been varied for the reactions of tetrazines 2a,b,g bearing methyl, phenyl, and pyrazolyl substituents. Attempts to use Pb(OAc)4 as an oxidizing agent in CHCl3 resulted in the formation of difficult-to-separate reaction mixtures with a low content of the target products 3a,b,g, which could not be isolated in a pure form. Heating of tetrazines 2 with N-bromosuccinimide in refluxing acetonitrile without microwave irradiation made it possible to obtain the product 3j in a low yield (10%), but did not afford the products 3a,g. The reactions of 2 with (diacetoxyiodo)benzene in acetonitrile gave the target products 3a,b,g, however, both yields and purities of these compounds proved to be higher when trifluoroethanol was used as a solvent.

The reactions of new triazolo[1,5-b][1,2,4,5]tetrazines with some CH-active compounds, such as malononitrile, ethyl cyanoacetate and diethyl malonate, have been studied. Similarly to isomeric triazolo[4,3-b][1,2,4,5]tetrazines [36], these derivatives do not form ipso-substitution products with the displacement of a leaving group in the tetrazine ring by the action of CH-acids. Instead, a nucleophile attack on the nitrogen atom of the tetrazine ring does occur followed by ring-opening and ring closure (Scheme 4).

It has been found that triazolo[1,5-b][1,2,4,5]tetrazines 3 do not enter the characteristic for isomeric [4,3-b]-annulated derivative reactions with malonic ester, leading to expansion of the tetrazine ring and the formation of triazolotetrazepines [36]. At the same time, a more active malononitrile reacts easily with compounds 3a,j to afford triazolopyrimidines 6a,b (Scheme 4). In the reaction of ethyl cyanoacetate with triazolotetrazine 3j, a mixture of products is formed, in which, along with the diamino compound 7 and triazolotetrazepine 8 (which is characteristic for the behavior of [4,3-b]-annulated systems) triazolopyrimidine 9 has been obtained (Scheme 4).

Product 9, like products 6a,b, appears to be derived from double addition of the reagent, accompanied by opening of the tetrazine ring and recyclization (Scheme 4). In the reaction of 7-methyl-substituted triazolotetrazine 3a with ethyl cyanoacetate, a rather complicated mixture of several products has been obtained, none of the latter failed to be isolated in a pure form. Thus, it has been shown that new triazolo[1,5-b][1,2,4,5]tetrazines retain electrophilic centers inherent in the known triazolo[4,3-b][1,2,4,5]tetrazine system. However, their reactions have a low regioselectivity, thus leading to a large number of byproducts, thus making it difficult to separate the reaction mixture.

All synthesized [1,2,4]triazolo[1,5-b][1,2,4,5]tetrazines 3–5 were screened in vitro for their fungistatic activities against mycelial anthropophilic and zooanthropophilic dermatophytes (Trichophyton, Microsporum and Epidermophyton), which cause diseases of the skin and its appendages (hair, nails) (Table 1). In the series of compounds 3a–i, in which substituents in the triazole ring were varied, the derivatives 3a,b,g, containing methyl, phenyl and pyrazol-1-yl, proved to exhibit the highest activity. Triazolotetrazine 3a shows a high activity (MIC ≤ 3.12 μg/mL) against the strains Trichophyton tonsurans, Trichophyton violaceum and Epidermophyton floccosum. Phenyl-substituted derivative 3b proved to be a moderately active (MIC = 6.25 μg/mL) in relation to Trichophyton violaceum and Epidermophyton floccosum. In case of pyrazolyl derivative 3g, a high fungistatic activity (MIC = 1.5 μg/mL) was detected for the Epidermophyton floccosum strain. Modification of active compounds 3a,b at C(3) allowed us to obtain 5 more derivatives exhibiting a high and moderate activity (MIC from 0.38 to 6.25 μg/mL) for one (3j, 5b) or several (4a, 5a, 5c) strains (Table. 1). Thus, the most promising compounds for chemical modifications aimed at the development of new fungistatics appear to be [1,2,4]triazolo[1,5-b][1,2,4,5]tetrazines, containing a methyl, phenyl or pyrazolyl substituent in the position C(7). It has been revealed that the introduction of methyl or methoxy groups into the structure of triazolotetrazines leads to a significant increase of activity for a wide range of strains (compounds 3a, 4a, 5a). Introduction of alkylamino or 4-bromopyrazolyl substituents results in active compounds acting selectively on a particular dermatophyte strain. Indeed, compounds 3j and 5b proved to be effective against Epidermophyton floccosum, and 5c against Microsporum canis.

For a comparative analysis of antifungal activity, the previously described [37] 3-methyl- and 3-phenyltriazolo[4,3-b][1,2,4,5]tetrazines 10a,b were used as structural analogues of compounds 3a,b. Furthermore, in the reactions of compound 10a with methanol, heptylamine and morpholine, new derivatives 11a–c have been obtained, which can be regarded as isomers of compounds 4a–c (Scheme 5).

Analysis of the data on fungistatic activity has revealed that in the series of compounds 2, 10 and 11 no derivatives exhibit a pronounced activity (Table 1).

Thus, a new method for the synthesis of [1,2,4]triazolo[1,5-b][1,2,4,5]tetrazines has been developed. A comparative analysis of their reactivity and fungistatic activity relative to isomeric [1,2,4]triazolo[4,3-b][1,2,4,5]tetrazines has been performed. It has been shown that new derivatives retain the electrophilic character and the reactivity pattern in the reactions with nucleophiles known for annulated tetrazine systems. It has been revealed that the synthesized compounds exhibit a pronounced activity against dermatophyte fungal strains Trichophyton, Epidermophyton, Microsporum: Seven compounds with a high fungistatic activity (0.38 ≤ MIC ≤ 1.5 μg/mL) have been found. All the above-mentioned results demonstrate good prospects for finding new antifungal drugs in this class of compounds.

Analytical studies were carried out using equipment of the Center for Joint Use “Spectroscopy and Analysis of Organic Compounds”, located in Postovsky Institute of Organic Synthesis of the Ural Branch of the Russian Academy of Sciences.

This work was supported by the Ministry of Education and Science of the Russian Federation (Agreement No. 075-15-2020-777).

© 2022 Korotina et al.; licensee Beilstein-Institut.
This is an open access article licensed under the terms of the Beilstein-Institut Open Access License Agreement (https://www.beilstein-journals.org/bjoc/terms), which is identical to the Creative Commons Attribution 4.0 International License (https://creativecommons.org/licenses/by/4.0). The reuse of material under this license requires that the author(s), source and license are credited. Third-party material in this article could be subject to other licenses (typically indicated in the credit line), and in this case, users are required to obtain permission from the license holder to reuse the material. 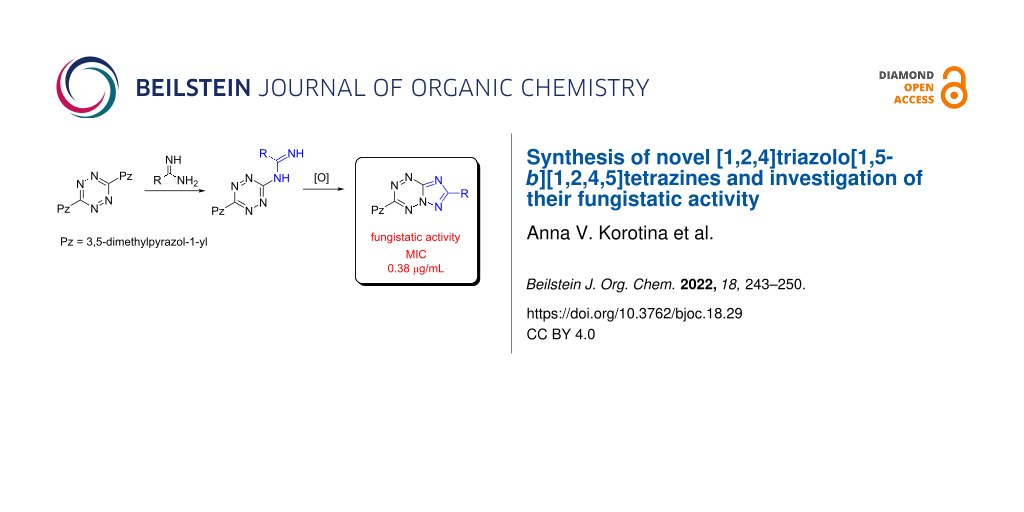