All articles from this author
Hang Li


All articles from this author
Simon Kessler


All articles from this author
Peter S. Solomon

Chemical investigation of the barley and wheat fungal pathogen Bipolaris sorokiniana BRIP10943 yielded four new sativene-type sesquiterpenoid natural products, bipolenins K–N (1–4), together with seven related known analogues (5–11), and a sesterterpenoid (12). Their structures were determined by detailed analysis of spectroscopic data, supported by TDDFT calculations and comparison with previously reported analogues. These compounds were evaluated for their phytotoxic activity against wheat seedlings and wheat seed germination. The putative biosynthetic relationships between the isolated sesquiterpenoids were also explored.

Fungi belonging to the genus Bipolaris (teleomorph: Cochliobolus) have been reported to produce a diverse array of secondary metabolites, including sesquiterpenes [1-7], sesquiterpene-xanthones [8], diterpenes [9], sesterterpenes [10], cochlioquinones and peptides [11]. Moreover, several of these secondary metabolites are known to play important roles in mediating the virulence of these fungi against plant hosts [12]. Well-known examples include the host-specific toxins victorin and T-toxin and other non-host-specific toxins such as the ophiobolins [11]. Bipolaris sorokiniana (syn. Cochliobolus sativus) has been identified as the causative agent of multiple diseases on wheat and barley and is a major threat to yield improvement and food security in Central Asia [13]. Recent genome sequencing of 35 Australian strains of B. sorokiniana identified a known proteinaceous necrotrophic effector, ToxA, which confers host-specific virulence proteins and is proposed to be acquired through horizontal gene transfer [14]. To date, only three studies have explored phytotoxins from B. sorokiniana [2,7,10]. Therefore, in the framework of furthering our understanding of the roles of B. sorokiniana secondary metabolites in crop disease, we investigated the compounds produced by the ToxA-containing strain BRIP10943 (CS10) [14] and their phytotoxicity. This led to the isolation of four new sativene-type sesquiterpenoid natural products along with seven related known analogues and one sesterterpenoid. Herein, the isolation, structure elucidation and phytotoxic activities of these compounds are presented.

B. sorokiniana was cultivated for 22 days in Fries medium supplemented with rolled oats. The resulting broth and mycelia were extracted with methanol and the extracts were partitioned against EtOAc/MeOH/acetic acid (89.9:10:0.1 ratio). The combined organic layer was chromatographed repeatedly with silica gel and RP-HPLC to afford four new sativene-type sesquiterpenoids, bipolenins K–N (1–4), along with eight previously reported compounds (5–12), which were identified as sativene-type sesquiterpenoids prehelminthosporol lactone (5) [1], helminthosporic acid (6) [1], helminthosporol (7) [15], bipolenin A (8) [3], secolongifolene diol (9) [15], dihydroprehelminthosporol (10) [1] and sorokinianin (11) [2], and the cytotoxic sesterterpenoid, terpestacin (12) [16,17] (Figure 1).

The relative configuration of 1 was established based on NOESY correlations (Figure 3) of H-1 to H2-5 and H3-10; and H2-14 to H-7, H3-8 and H-13. Due to the constrained bicyclo[3.2.1]octane ring system, these NOESY correlations indicated that H-1 was β-oriented, while H-6, H-7, H3-8 and H-13 were α-oriented. The absolute configuration of 1 was determined to be 1R,3R,6S,7R,13S by comparison of the experimental electronic circular dichroism (ECD) spectrum with time-dependent density functional theory (TDDFT)-calculated ECD spectra of the two possible enantiomers of 1 (Figure 4).

Bipolenin L (2) was isolated as a colourless oil. The HRESIMS [M + H]+ ion at m/z 251.1649 corresponded to a molecular formula C15H22O3 (calcd for C15H23O3+, 251.1642), which is isomeric with 1. The 1H and 13C NMR data for 2 (Table 1) were also very similar to those for 5, with the only significant difference being the presence of a hydroxymethylene group (δC 65.8; δH 3.58 and 3.44) in place of the methyl group at C-11. Thus, the structure of 2 was assigned as the 11-hydroxy analogue of 5. The absolute configurations of the chiral centres in 2 were established to be the same as for 1 after investigation of the proton coupling constants (Table 1), NOESY correlations (Figure 3) and ECD spectra (Figure 4). The configuration at C-9 was not determined. Hence, structure 2 was determined as shown in Figure 1.

Bipolenin N (4) was acquired as a colourless oil. Its molecular formula was determined to be C15H28O4 from the HRESIMS [M + H − 2H2O]+ ion at m/z 237.1859 (calcd for C15H25O2+, 237.1849). The UV–vis spectra of 1–3 (Figure S37, Supporting Information File 1) and previously reported congener 5 were almost identical, while 4 displayed no significant UV–vis absorptions, suggesting the absence of both the ester and alkene moieties. This was confirmed by the analysis of the 1H and 13C NMR data for 4 (Table 1), which revealed the absence of ester and alkene resonances and the presence of three hydroxylated methylenes at C-12 (δC 62.2; δH 3.79 and 3.65), C-14 (δC 69.8; δH 3.90 and 3.36) and C-15 (δC 62.9; δH 3.77 and 3.47), and one hydroxylated quaternary carbon at C-2 (δC 88.1). This suggested 4 was related to 5, but with reduction of the lactone ring to the dialcohol and dihydroxylation of the Δ2,12 double bond. Detailed analysis of the 2D NMR data for 4 (Figure 2) confirmed the seco-sativene-type scaffold. The relative configurations at C-1, C-3, C-6, C-7 and C-13 were determined to be the same as those of 1–3 and other reported analogues based on NOESY correlations (Figure 3), while the configuration at C-2 was not determined. The ECD spectrum of 4 (Figure S38, Supporting Information File 1) was measured, but no significant Cotton effect was observed. Therefore, the structure of 4 was determined as shown in Figure 1.

Equipped with the compounds, we tested 1–12 for phytotoxic activity against wheat seedlings. The compounds all showed negligible activities at 200 ppm, although 6 and 10 showed signs of necrosis at 500 ppm (Figure S40, Supporting Information File 1). In addition, the activities of 1, 6–10 and 12 against wheat seed germination were also tested, with 7 inhibiting germination at 100 ppm (Figure S41, Supporting Information File 1). This corresponds to a previous report of the inhibitory effects of 7 on lettuce seed germination [19]. This activity could be due to the presence of an aldehyde moiety in 7. Interestingly, an earlier study showed that 7 promoted the elongation of the shoots of rice seedlings [20]. Compound 12 was reported to have a broad spectrum of biological activities, including phytotoxicity on juvenile plant Bromus tectorum [21], syncytium formation inhibitory effects on cells infected with respiratory syncytial virus [22,23], induction of aerial mycelium formation in Fusarium culmorum [24], and as an inhibitor of ubiquinol-cytochrome c reductase binding protein, blocking mitochondrial ROS-mediated vascular endothelial growth factor receptor type 2 signalling pathways in endothelial cells [25]. However, 12 showed no activity against wheat seedlings or wheat seed germination in this study.

The sativene-type sesquiterpenoids contain a bicyclo[3.2.1]octane backbone and are related to seco-sativene and isosativene scaffolds [15] (Figure 5a). They were also proposed to be related to the bicyclo[4.2.1]nonane-containing longifolene and seco-longifolene sesquiterpenoids, as they were often co-isolated [3,4,6,15,26,27]. A closer examination of the biosynthetic relationship between sativene and longifolene scaffolds suggests that the two pathways branched early at the nerolidyl cation (Figure 5b) [28-31]. The biosynthesis of 1–8 and 10–11 are likely to be derived from sativene with a key oxidation at C-15 followed by a Baeyer–Villiger oxidation to break the C-14–C-15 bond (Figure 5c). Based on an isotope labelling study, the γ-butyrolactone moiety on 11 has been proposed to be derived from oxaloacetic acid or similar TCA-cycle intermediates [32]. Compound 9, which contains the seco-longifolene scaffold, is likely to be derived from longifolene via a similar Baeyer–Villiger mechanism proposed above for 1–8 and 10 and 11.

Several sativene-type sesquiterpenoids have been previously reported from fungi, including from Bipolaris sp. [1], B. sorokiniana [2], B. eleusines [3-6,8], Cochliobolus sp. [26], Cochliobolus sativus [18], Helminthosporium sativum [20,33,34], Drechslera sp. [27], Drechslera dematioidea [15], and Veronaea sp. [35], most of which are Dothideomycetes. Significantly, this is the first report pertaining to sativene-type sesquiterpenoids from B. sorokiniana in 25 years, since the first and only literature account was published in 1994 [2]. Furthermore, structure 4 has a seco-sativene type scaffold without an olefin unit at C-1/C-2 or C-2/C-12. In contrast, all the previously known seco-sativene-type sesquiterpenoids possessed a double bond either at C-1/C-2 or C-2/C-12 [1,2,15,18,20,33], except drechslerine C, which contains a decarboxylated seco-sativene-type scaffold [15]. To the best of our knowledge, the previously reported sativene-type sesquiterpenoids 5 (isolated from B. eleusines and Cochliobolus sp., and from semi-synthetic analogue of prehelminthosporol with pyridinium chlorochromate or chromic acid) [1,4,18,26], 8 (isolated from B. eleusines) [3,6], and 10 (isolated from Bipolaris sp. and Cochliobolus sp.) [1,26], were reported in B. sorokiniana for the first time, while, known metabolites 6 and 7 [20], 9 [34], 11 [2], and 12 [16] were previously reported from B. sorokiniana (syn. C. sativus and H. sativum).

The biosynthetic gene cluster (tpc) for terpestacin (12) has been recently identified from Bipolaris maydis [36]. A didomain sesterterpene synthase (tpcA) with a terpene cyclase domain and polyprenyltransferase domain was demonstrated to be responsible for the production of the sesterterpene backbone of 12. A BLASTp search using tpcA as query against the genome of B. sorokiniana ND90Pr and BRIP10943 identified COCSADRAFT_342920 in ND90Pr (and its homolog in BRIP10943), which shares 96% identity to tpcA. In the vicinity of the sesterterpene synthase gene, we also identified homologs for the two P450 oxygenases (tpcB and tpcC) encoded in the tpc cluster as COCSADRAFT_342924 (92% identity) and COCSADRAFT_146541 (98% identity), respectively, while the tpcD homolog in B. sorokiniana corresponded to COCSADRAFT_94398 (91% identity). This suggests that the homologous gene cluster in B. sorokiniana is likely responsible for production of 12. We are currently investigating the genetic basis for the biosynthesis of the sativene-type terpenoid compounds identified from B. sorokiniana.

Following the first and only reported isolation of a sativene-type sesquiterpenoid, sorokinianin (11), from B. sorokiniana in 1994 [2], we have expanded the number of reported analogues to eleven. These include the new sesquiterpenoid natural products, bipolenins K–N (1–4), as well as the previously reported sesquiterpenoids prehelminthosporol lactone (5), helminthosporic acid (6), helminthosporol (7), bipolenin A (8), secolongifolene diol (9), dihydroprehelminthosporol (10) and sorokinianin (11), together with a sesterterpenoid, terpestacin (12). We demonstrated that 6 and 10 have weak necrotic activity against wheat leaves, while 7 inhibited wheat seed germination at 100 ppm. These compounds served as markers for identifying putative sesquiterpene synthase genes in the genome of B. sorokiniana BRIP10943, allowing the molecular genetic basis for their biosynthesis and their roles in mediating the virulence of B. sorokiniana against wheat to be explored.

The fungal strain B. sorokiniana BRIP10943 was obtained from Queensland Plant Pathology Herbarium (BRIP). It was isolated from a wheat field at Hermitage, QLD, Australia. The fungus was maintained on potato dextrose agar (PDA).

The phytotoxicity assays on wheat leaves and seeds were carried out as previously reported [37]. Briefly, the leaves of 17-days-old wheat seedlings in 10 cm planting pots were grown at 20 °C under a 16 h/8 h light/dark cycle regime. Compounds were dissolved in 0.2% MeOH/H2O and 30 µL of dissolved solution was infiltrated on the adaxial face of leaves at concentrations of 100, 200 and 500 ppm (serial dilution) using a 1 mL syringe. The leaves were examined for the presence of necrosis or chlorosis after 24 h and 48 h. The control consisted of 30 µL of 0.2% MeOH/H2O without dissolved compound. Two wheat seeds (sterilised by 10% EtOH) were placed on top of the agar (1.5% agar in 1 mL of tap water) containing 100 ppm of compound. The control was agar containing 30 µL of MeOH. The seeds were monitored for the progress of germination on day 5 and day 7.

Structures were initially subjected to a LowModeMD conformational search using the Molecular Operating Environment 2019.0101 package. The lowest energy geometry for each molecule was further optimised by DFT at the B3LYP-D3/def2-TZVPP level of theory using Turbomole 7.1 [38] and ECD spectra were calculated in Turbomole using TDDFT (B3LYP-D3/def2-TZVPP).

This study was funded, in part, by the Australian Research Council (FT130100142 and FT160100233) and the Cooperative Research Centres Projects scheme (CRCPFIVE000119). The research was undertaken with the assistance of resources and services from the National Computational Infrastructure (NCI), which is supported by the Australian Government. Authors acknowledge the facilities of Microscopy Australia at the Centre for Microscopy, Characterisation & Analysis, The University of Western Australia, a facility funded by the University, State and Commonwealth Governments.

Terpenoids from Glechoma hederacea var. longituba and their biological activities

© 2019 Phan et al.; licensee Beilstein-Institut.
This is an Open Access article under the terms of the Creative Commons Attribution License (http://creativecommons.org/licenses/by/4.0). Please note that the reuse, redistribution and reproduction in particular requires that the authors and source are credited.
The license is subject to the Beilstein Journal of Organic Chemistry terms and conditions: (https://www.beilstein-journals.org/bjoc) 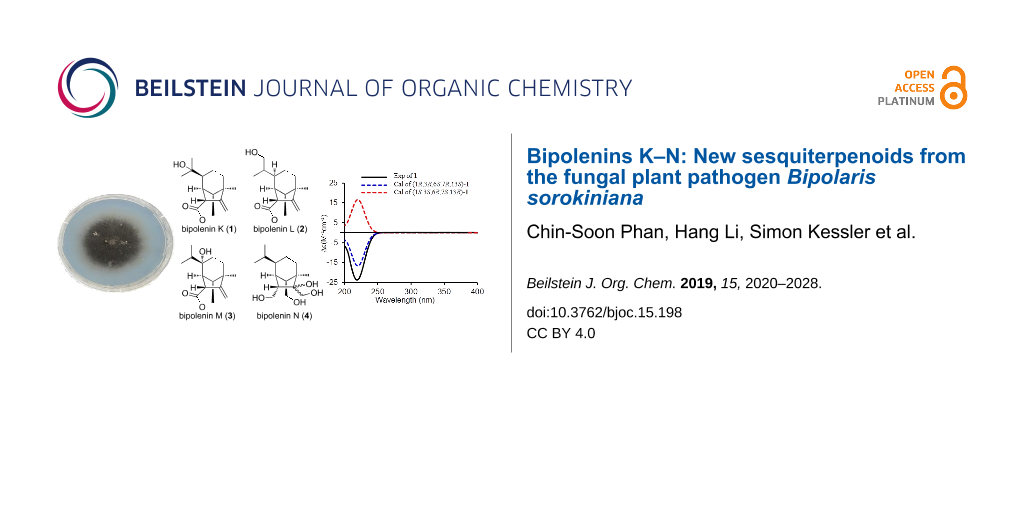