All articles from this author
Yujie Yuan


All articles from this author
Guangkai Bian


All articles from this author
Ziling Ye


All articles from this author
Zixin Deng


All articles from this author
Tiangang Liu

Terpenoids represent the most diverse group of natural products, with a wide distribution in microorganisms, plants, insects and various marine invertebrates [1,2]. More than 80,000 terpenoids have been identified and characterised [3-5]. These diverse and complex natural products are mostly derived from carbocation cyclisation with linear C5 isoprene precursors, which are catalysed by terpene synthases (TPSs) [6]. TPSs can be classified into three types based on their amino acid sequence. Type I TPSs are metal-dependent enzymes that initiate cyclisation by the elimination of diphosphate groups from precursors and carbocation formation, and type II TPSs initiate the catalytic process by the protonation of an olefinic double bond [7]. The recently reported type III TPSs, UbiA-related TPSs, also catalyse cascade reactions by diphosphate elimination [8]. In addition, each type of TPS is characterised by a unique aspartate-rich motif; most type I TPSs have a DDXXD/E motif and an NSE/DTE motif, whereas type II TPSs have the DXDD motif [9,10].

The C15 sesquiterpenoids constitute a large class of terpenoids with a wide range of industrial and commercial applications, including uses in flavours and perfumes, as bioactive molecules in the pharmaceutical industry, and in health care products [11]. Sesquiterpenoids are biosynthesised from the universal linear precursor farnesyl pyrophosphate (FPP) and assembled by FPP synthases, using dimethylallyl diphosphate (DMAPP) and isopentenyl diphosphate (IPP) as substrates. The subsequent elimination of diphosphate from FPP is catalysed by sesquiterpene synthases, with further cyclisation steps to form structurally diverse (poly)cyclic core skeletons [3,12]. A set of post-modification enzymes can transform core sesquiterpene skeletons into different kinds of sesquiterpenoids with potential anticancer, cytotoxic and antibiotic functions [13]. More than 121 skeleton structures derived from the sesquiterpene precursor FPP via sesquiterpene synthase have been described. Nearly 75% of these structures have at least one six-membered ring; 69% of these contain five-membered rings, occupying a large portion. Three- and seven-membered ring structures account for just 21% and 24% of these structures, respectively. Four (10%) and eight (7%) membered ring structures (e.g. asteriscanolide) are seldom found [14]. With the lower costs of gene sequencing, recent developments in genome mining by sequencing and annotation have led to the discovery of a large number of functionally unknown terpene synthases [15-17], generating diverse complex structures and several bioactive products (e.g., 6α,9α,15-trihydroxycadinan-4-en-3-one, (+)-3,11,12-trihydroxycalamenene, and (−)-3,10,11,12-tetrahydroxycalamenene) [18].

Filamentous fungi are powerful producers of terpenoid products [19]. Many terpenoids produced by these fungi have recently been characterised; these terpenoids exhibit diverse complex structures and uncommon catalytic mechanisms [20]. However, a limited number of sesquiterpenes have been characterised from a few fungal taxa (e.g., trefolane A and sterhirsutins) [21]. Trichoderma viride is a filamentous fungus that has received considerable attention as an effective biocontrol agent against two fungal pathogens, Fusarium oxysporum f. sp. adzuki and Pythium arrhenomanes, infecting soybean. This fungus is a competent mycoparasite and strong producer of secondary metabolites [22,23]. However, T. viride terpenoids have rarely been studied and the low concentrations of products under natural conditions have limited the pace of research in this field. Metabolic engineering makes the overproduction of different terpenoids from T. viride possible [21,24]. To increase the discovery efficiency of terpenoid products, heterologous expression of various sources of terpene synthases in Escherichia coli and Saccharomyces cerevisiae is a feasible approach [25,26].

In this study, a combination of genome mining and metabolic engineering was used for sesquiterpenoid discovery, utilizing farnesyl diphosphate-overexpressing S. cerevisiae as a platform (Figure 1). By the heterologous expression of predicted terpene synthases from the genome of T. viride, an unknown sesquiterpene synthase was identified and characterised. Furthermore, a new compound produced by this enzyme and its esterified product were detected and characterised by GC–MS and 1D and 2D NMR, revealing a 5/6 bicyclic sesquiterpene and its C-11 esterified structure. Based on a literature search, to our knowledge, this is the first report of the characterisation of a sesquiterpene synthase in T. viride. In addition, this study demonstrates the effectiveness of the combination of genome mining and heterologous expression of predicted terpene synthases for detecting unknown terpenoids from rarely studied fungi.

Through genome sequencing of T. viride J1-030 and prediction of the potential terpene synthases in J1-030 genome, gene Tvi09626 was selected and the following bioinformatics analysis of the function of this unidentified terpene synthase was performed. A protein blast search against the NCBI database was performed with Tvi09626, revealing sequence identities of 89.66% and 85.23% with the enzymes from the strain T. virens Gv29-8 [27] and T. reesei QM6a [28], respectively, with only predicted functions. Thereafter, an amino acid sequence alignment with several known terpene synthases showed that Tvi09626 had the typical highly conserved 128DDxxD/E aspartate-rich motif, 276NSE/DTE triad, 366RY dimer and 230R monomer (Figure S1, Supporting Information File 1) [29-31]. Furthermore, in a phylogenetic analysis (Figure 2), Tvi09626 belonged to Clade V of Class I terpene synthases. In previous studies, terpene synthases have been studied in the genus Trichoderma, such as trichodiene synthase homologous gene isolation and characterisation in T. harzianum [32] and functional identification of terpene synthase vir4 in T. virens [33]. However, owing to the general lack of previous studies of terpene synthases in T. viride, Tvi09626 is the first terpene synthase well-identified with products characterised in T. viride.

In vitro analysis of Tvi09626 function

To confirm the function of the candidate enzyme, the DNA sequence of Tvi09626 was amplified by touchdown PCR from the T. viride genome. The gene fragment was cloned into a pET28a (+) vector to construct the plasmid pXS222. Next, pXS222 was transformed into BL21 to overexpress and purify Tvi09626 (Figure S2, Supporting Information File 1). The substrates GPP, FPP and GGPP were incubated with the protein individually and the products were detected and analysed by gas chromatography/mass spectrometry (GC–MS) [30,34]. In vitro assays clearly showed that Tvi09626 could use FPP as its only substrate to produce compound 1 (Figure 3 and Figure S3, Supporting Information File 1).

To further verify the function of the putative terpene synthase, a metabolic engineering strategy was used to reconstruct an FPP overproduction platform in S. cerevisiae in order to obtain sufficient quantities of the products of Tvi09626 for chemical structural characterisation. S. cerevisiae YZL141, engineered previously [21], was used owing to its ability to provide enough IPP, DMAPP, and FPP for the production of terpenoids (Figure 1). After 72 h of shaken-flask fermentation, the strain was extracted with hexane/ethyl acetate (4:1), pre-separated by silica gel column chromatography, and detected by GC–MS. Similar to the in vitro assay results, compound 1 was the final product (Figure 4). Interestingly, during the extraction process, compound 2 was detected at a retention time of 14.53 min and identified as esterified compound 1 (Figure 4 and Table S4, Supporting Information File 1). Using the metabolic engineering strategy, the product of Tvi09626 was efficiently enriched via an abundant FPP supply.

Detection and characterisation of Tvi09626 products

The 5/6 bicyclic sesquiterpene identified and characterised in this study was a brasilane-type sesquiterpenoid; this sesquiterpenoid type is typically isolated from cultures of the basidiomycete Coltricia sideroides in combination with its two new alkane derivatives colisiderin A and (7E,9E)-undeca-7,9-diene-2,4,5-triol [35] and from the organic extract of the red alga Laurencia obtusa [36]. However, to the best of our knowledge, ours is the first report of these brasilane-type sesquiterpenes obtained via biosynthetic genes.

Metal ion dependency of Tvi09626 and its kinetics

In conclusion, we identified a novel sesquiterpene synthase, Tvi09626, from T. viride using a strong sesquiterpene overproduction platform with S. cerevisiae YZL141; it is the first biochemically identified and characterised sesquiterpene synthase from this filamentous fungus. In an analysis of its relative structure, the product of this enzyme was characterised as a 5/6 bicyclic sesquiterpene compound 1 oxygenated at C-11. Interestingly, esterified compound 1 was isolated during the product extraction process, suggesting an esterification reaction. It contained a quaternary carbon with two methyl groups, which is uncommon of the cyclization mechanism of sesquiterpenoids and needs to be studied in the future. To the best of our knowledge, this study reports the first use of a biosynthetic gene to obtain a brasilane-type sesquiterpene.

© 2019 Sun et al.; licensee Beilstein-Institut.
This is an Open Access article under the terms of the Creative Commons Attribution License (http://creativecommons.org/licenses/by/4.0). Please note that the reuse, redistribution and reproduction in particular requires that the authors and source are credited.
The license is subject to the Beilstein Journal of Organic Chemistry terms and conditions: (https://www.beilstein-journals.org/bjoc) 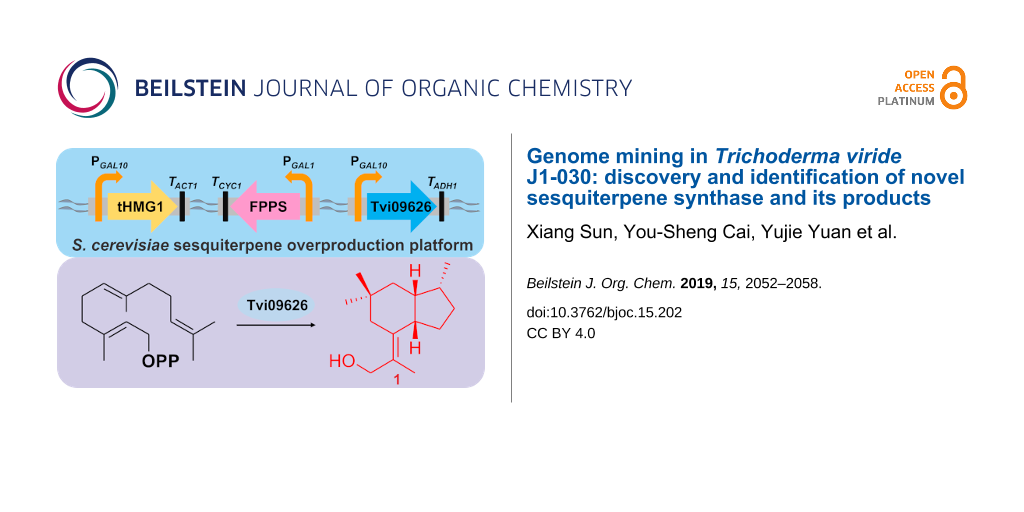