All articles from this author
Kaori Morinaka


All articles from this author
Mahmut Kose

Three new diarylethenes were synthesized from 1,2-bis(5-methyl-2-(4-substituted-phenyl)thiazol-4-yl)ethyne and benzyl azide through Ru(I)-catalyzed Huisgen cyclization reactions. The 4,5-bisthiazolyl-1,2,3-triazoles thus prepared, which belong to the terarylene family, showed thermally reversible photochromism. The absorption maximum wavelengths of the closed forms are longer than other terarylenes reported so far. The thermal back reactions are much faster when the substituents on the terminal phenyl groups are electron-withdrawing cyano groups than when they are electron-donating methoxy groups.

Terarylenes [10,11], one of the closely related families of diarylethenes, are largely thermally reversible [10,12] although some are irreversible when the aromatic stabilization energy of the aromatic rings is small [11]. Their syntheses are usually carried out by the sequential construction of the central aromatic ring at the final stage [10] or the introduction of two aromatic rings to the central aromatic ring [11]. If the construction of three contiguous aromatic-ring arrays can be easily achieved, a new and facile synthesis method for the photochromic family which undergoes 6π-electrocyclization can be realized [13].

Early in the 21st century, Sharpless and co-workers proposed the concept of “click chemistry” [14], which stands for the secure, quick, selective, general and facile reaction between two organic functional groups. In click chemistry, the Huisgen cyclization, which occurs between an organic azide and a terminal alkyne catalyzed by a Cu(I) ion, was regarded as the representative reaction [15,16]. This reaction occurs even in aqueous media, the chemical yield is always high, and the regiochemical structure of the product is always 1,4-disubstituted triazole.

As the organic azide we used commercially available benzyl azide. Since 1,2-bis(5-methyl-2-phenylthiazol-4-yl)ethyne was used in our previous research [32-34], we employed bisthiazolylethynes as the foundation for the skeleton of the target compounds. In order to examine the substituent effects of the terminal phenyl groups on the photochromic properties, compounds with methoxy groups or cyano groups at the para-position of the phenyl groups were also synthesized. To avoid the generation of isomers with a substitution pattern by Huisgen cyclization, the same substituents were introduced to both phenyl groups.

The Ru(I)-catalyzed Huisgen cyclization reaction proceeded rather smoothly to give 1o, 2o and 3o in moderate chemical yields of 36%, 53% and 20%, respectively. Since the reported chemical yield of the reaction of tolan, the simplest bisarylethyne, and 2-phenylethyl azide was 63% [19], it could be considered reasonable that the reactions of the sterically more congested ethynes and benzyl azide gave triazoles with less chemical yields. Details of the synthesis are described in Supporting Information File 1.

Triazoles were dissolved in ethanol (EtOH), acetonitrile (MeCN), ethyl acetate (AcOEt) and toluene, and each solution was irradiated with 313 nm light. The changes in the absorption spectra during UV light irradiation in MeCN are shown in Figure 1 (spectra of the compounds in the other solvents are shown in Figures S1–S9 in Supporting Information File 1). The absorption spectral properties are summarized in Table 1 together with their predicted absorption maxima obtained by TD DFT calculations in vacuum [35]. Although 1o and 2o showed substantial coloration, 3o showed only a slight coloration at room temperature.

When the substituents on the terminal phenyl rings are electron-withdrawing cyano groups, the measured absorption maximum of the closed form was about 40 nm longer than the others in any solvent. The substituent effect observed here is different from the small substituent effect on the closed forms of the representative bisthienylhexafluorocyclopentenes 4c (R = H, 562 nm), 5c (R = OMe, 570 nm) and 6c (R = CN, 570 nm) in hexane (Scheme 3) [36]. In triazoles, while the introduction of electron-donating methoxy groups had little effect on the absorption maximum wavelengths, the introduction of electron-withdrawing cyano groups induced a large bathochromic shift. This observation was well-reproduced by TD DFT calculations (Table 1 and chapter SI-4 in Supporting Information File 1).

As expected, all closed forms of triazoles showed thermal back reactions since the photochemical cyclization results in the loss of the aromatic stabilization energy [41] of the three contiguous aromatic rings. The changes in the absorption spectra of thermal decoloration in MeCN at room temperature are shown in Figure 2.

In order to clarify the nature of the thermal back reaction of triazoles, 1o, 2o and 3o were irradiated with 313 nm light in four different solvents, and the decrease in the absorbance of the absorption maximum wavelengths in the visible region was observed at three different temperatures. The first order reaction rate constants of the thermal back reactions at different temperatures were then determined. Arrhenius plots of ln k against 1/T gave pre-exponential factors (A) and Arrhenius activation energy Ea of these thermally reversible photochromic triazoles (Figures S10–S13 in Supporting Information File 1). The kinetic data of the thermal back reactions of 1c–3c in toluene are shown in Table 3 together with the literature data of related compounds 9c [39] and 10c [40] shown in Scheme 4.

As shown in Table 3, the thermal back reaction is fast when the aromatic stabilization energy of the central aromatic ring is large. Although Ea of 10 is smaller than that of 1 and 2, the pre-exponential factors (A) of 1 and 2 are about 104 times and 103 times larger, respectively, than that of 10.

When the thermal kinetic data of 1, 2 and 3 are compared, the thermal back reaction rate of 3 is extremely faster than the others, although the central aromatic ring is common to these compounds.

As shown in Table 4, neither electronic charge distribution on the carbon atoms (natural charge [42]) comprising the thermally breaking C–C bond, its bond length nor its bond order, which were obtained by DFT calculations of these compounds, did not give a clear explanation for the difference in the reaction rate. Possible evidence of the fast back reaction of 3c may be found in the bond lengths and Mulliken bond orders between the atoms constructing the conjugation system around the central cyclohexadiene moiety (Scheme 5).

aCalculated by DFT calculations as the number of positive charges [42].

In Scheme 5a, the single bonds of 3c written in red are shorter than in the other two compounds, implying that they have a stronger double bond character. Similarly, the double bonds of 3c written in green are longer, showing the stronger single bond character. This suggests a stronger bond alteration tendency in 3c than in 1c and 2c, and this distinctive character of 3c can be seen more clearly in Scheme 5b.

In addition, since the bond order of the N–Bn bond in blue of 3c is the smallest, it can be reasonably assumed that the lone pair on this nitrogen atom participates in the conjugation in the molecular core more strongly than in 1c and 2c. This distinctive character of 3c originates from the electron-withdrawing cyano groups in the molecule.

Then how does this effect accelerate the thermal back reaction in 3c? We propose the conventional reaction mechanism shown in Scheme 6. When the delocalized lone pair on the nitrogen atom moves back from the resonance structures A and B, it may break the central C–C single bond to give the open form, as shown with the arrows. The resonance structures are stabilized more strongly when R is a cyano group so that the C–C bond scission occurs easily. Thus, it is possible to control the rate of the thermal back reaction by: (1) changing the aromatic ring at the ethene moiety, and (2) changing the substituents on the phenyl rings at the peripheral of the molecule.

Finally, we would like to discuss the solvent effects on the thermal back reactions of 1c, 2c, and 3c. As can be seen in Figure S13, the solvents are classified into two categories: (1) polar solvents (EtOH and MeCN) and (2) less polar solvents (AcOEt and toluene). Although the gradient of the lines (Ea) for the same compound in Figure S13a–c are quite similar, the intercepts (A) are clearly different for the two solvent groups of 1c and 2c. As for 3c, although its categorization is not as clear as 1c and 2c, differences can still be observed. In general, the thermal back reactions are faster in the more polar solvents, and faster in MeCN than in EtOH among these two solvents. However, for 2c, it is faster in EtOH than in MeCN. This may have originated from the hydrogen-bond formation between EtOH molecules and the methoxy groups in 2c, which reduces the electrostatic repulsion between the methoxy groups and the negatively charged phenyl groups in the intermediate resonance structures A and B shown in Scheme 6.

In less polar solvents, the thermal back reactions of 1c and 2c are faster in toluene than in AcOEt. However, the reaction of 3c is the opposite. This could be explained by the strong electron-withdrawing power of the cyano groups in 3c, which enhanced the charge-separation character in the intermediate resonance structures A and B. These structures are stabilized more strongly in more polar AcOEt than in toluene, and the thermal back reaction rate in AcOEt was increased.

We have synthesized three novel thermally reversible 4,4'-(1-benzyl-1H-1,2,3-triazole-4,5-diyl)bis(5-methyl-2-(4-substituted-phenyl)thiazole)s 1o–3o by Ru(I)-catalysed Huisgen cyclization, which is a type of “click” reaction. They showed thermally reversible photochromism in various solvents. The absorption maximum wavelengths of 1c (with unsubstituted peripheral phenyl groups) and 2c (with methoxy groups on the phenyl groups) are close to 700 nm, while that of 3c (with cyano groups on the phenyl groups) was about 740 nm. The thermal back reactions of these compounds proved that 3c with the electron-withdrawing cyano groups is the fastest while 2c with electron-donating methoxy groups was the slowest. DFT and TD DFT calculations supported these experimental results.

The Cu(I)-catalyzed Huisgen reaction has been used many times to connect two functional molecules. When the Ru(I)-catalyzed Huisgen reaction is employed to connect two functional molecules, the linker itself possesses the thermally reversible photochromic property. Thus, this work can open the door to the creation of promising new materials with highly integrated functions.

This work was supported by MEXT KAKENHI Grant Number JP19050004 in Grant-in-Aid for Scientific Research in Priority Areas “New Frontiers in Photochromism (No. 471)” and JSPS KAKENHI Grant Number JP26107009 in Scientific Research on Innovative Areas “Photosynergetics”. The authors are also grateful to the Instrumental Analysis Center of Yokohama National University for their support in the NMR and MS measurements.

© 2019 Zhang et al.; licensee Beilstein-Institut.
This is an Open Access article under the terms of the Creative Commons Attribution License (http://creativecommons.org/licenses/by/4.0). Please note that the reuse, redistribution and reproduction in particular requires that the authors and source are credited.
The license is subject to the Beilstein Journal of Organic Chemistry terms and conditions: (https://www.beilstein-journals.org/bjoc) 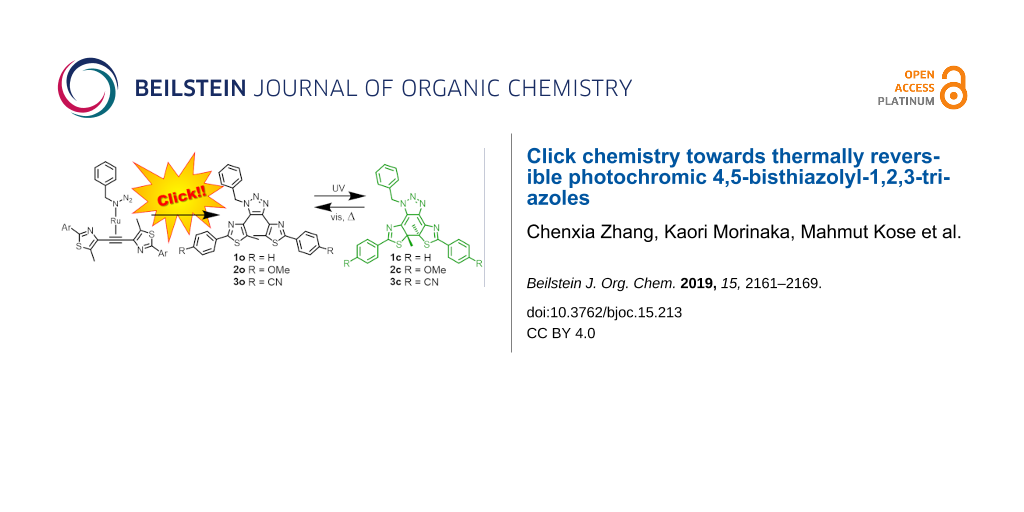