Synthesis of acremines A, B and F and studies on the bisacremines


All articles from this author
Dirk Trauner

The acremines are a family of meroterpenoids isolated from fungi of the genus Acremonium. Here, we present the asymmetric total synthesis of acremine F which hinges on a modestly enantioselective dihydroxylation and a subsequent kinetic resolution via a highly selective asymmetric reduction. Chemoselective oxidation of acremine F gave access to acremines A and B. The dimerization of acremine F to bisacremine E was investigated but could not be achieved, shedding light on the formation of the acremine dimers in nature.

Endophytic fungi grow in a symbiotic relationship with their plant hosts [1], which is mediated by secondary metabolites [2]. In 2005, Torta and co-workers reported the isolation of six meroterpenoid natural products, acremines A–F from A20, a strain of Acreonium byssoides, isolated from grapevine leaves that were artificially inoculated with Plasmopora viticola (Figure 1) [3]. This class of natural products is characterized by a highly substituted cyclohexene core, featuring up to three stereogenic carbons, which is linked to a prenyl unit. Nature achieves further diversification by several modes of oxidation and cyclization. While acremine F (5) exhibited no significant bioactivity, acremines A–D showed inhibition of P. viticola sporangia germination.

In 2015, Wei and co-workers discovered bisacremines E–G, the most complex members of the acremine family, from the soil-derived strain A. persicinum SC0105 [4]. These natural products are presumed to be derived from two acremine F (5) units by a formal [4 + 2] cycloaddition followed by condensation and oxidation.

Our retrosynthetic analysis of 5 is depicted in Scheme 1. The prenyl side chain would be introduced by transition metal-catalyzed cross coupling of vinyl iodide 9. Compound 9 in turn could be traced back to silyl enol ether 10. Ent-10 was first reported by Herzon and co-workers [9] and is derived from phenol silyl ether 11 via Birch reduction and dihydroxylation.

Our synthesis started with meta-cresol (12) which was protected as a TIPS ether and then subjected to Birch reduction conditions to afford cyclohexa-1,4-diene 13 [9]. Enantioselective Sharpless dihydroxylation proceeded in good chemoselectivity but with modest yield and optical purity (25% ee). Unfortunately, all attempts to improve the enantioselectivity of this reaction failed. We discovered, however, that at a later stage the optical purity could be improved (see below). Diol protection gave dioxolane 14, which underwent Saegusa oxidation to afford enone 15. Subsequent α-iodination gave access to α-iodoenone 16, which could be stereoselectively reduced under Corey–Itsuno conditions to yield allylic alcohol 17. The use of a chiral oxazaborolidine catalyst led to kinetic resolution and increased the optical purity of 17 to 95% ee. Deprotection of the diol moiety followed by Stille cross coupling with vinyl stannane 18 finally gave 5 in excellent yield (Scheme 2).

Since acremine F (5) can be expected to be the biogenetic precursor of acremines A (1) and B (2), we wanted to access these antifungal derivatives through selective oxidations. Indeed, treatment of 5 with IBX preferentially oxidized the C1-allylic alcohol, giving 1 in respectable yield. Prolonged treatment (9 h) of 5 with a large excess of IBX oxidized both secondary allylic alcohols and afforded 2 in good overall yield (Scheme 3).

Bisacremine E (7) was proposed to be formed in nature via [4 + 2] cycloaddition involving two acremine F (5) units [4]. Although dimerization of 5 through a Diels–Alder cycloaddition is not electronically favorable, we speculated that this reaction might proceed through ionic intermediates (Scheme 4).

To probe this hypothesis, we tried to generate allylic cation 19 by treatment with different acids or under thermal conditions (Table 1). Unfortunately, all conditions led to either decomposition of the starting material or elimination of the tertiary allylic alcohol to the unstable triene 6. As we were able to observe elimination as well as acetate incorporation into the molecule the desired cation was clearly formed under a variety of conditions. Nevertheless, none of these could affect the desired cyclization. Attempts to enhance the stability of the molecule, and therefore prevent decomposition, by protection of the non-participating alcohols and attempts to generate the allylic cation from a cyclic ketal [10-12], aiming for a Gassman-type reaction mechanism, were also unfruitful.

While radical cations are known to undergo Diels–Alder reactions with electron-rich dienophiles [13-17], treatment of 5 with Fukuzumi’s catalyst [18] under illumination with blue light only led to decomposition of the starting material (Table 1, entry 15). Notably, a photoredox catalyst with a lower oxidation potential could not affect any reaction. Next, we tried to enhance the possibility for productive reactivity by tethering two units of 5 and therefore executed the reaction in an intramolecular way (Scheme 5). Unfortunately, treatment of 23 with various redox catalysts led either to decomposition or recovery of the starting material.

Next, we tried to trigger the cyclization through a [2 + 2] cycloaddition followed by vinyl cyclobutane rearrangement [19,20]. We reasoned that the initially formed divinyl cyclobutane [21] should undergo an allylic rearrangement to furnish the decalin system [22,23]. Condensation should then close the tetrahydrofuran ring of the natural product. Upon irradiation of 5 using a Hg lamp, however, the only productive pathway which could be observed was isomerization of the disubstituted double bond (Table 1, entries 17 and 18). Again, we attempted to promote the reaction by tethering two acremine units through a dioxysilane (Scheme 6) [24-26]. Unfortunately, irradiation of 25 with and without the presence of different photosensitizers only led to decomposition.

In conclusion, we report the first asymmetric synthesis of acremine F (5) relying on the combination of a modestly enantioselective oxidation and a highly enantioselective reduction with kinetic resolution to access the acremine framework. The route proved to be scalable and delivered 300 mg of the natural product. Acremine F could further be converted into acremines A (1) and B (2) by a selective oxidation providing a versatile entry into this class of natural products. Furthermore, we investigated the proposed biomimetic dimerization of 5 to bisacremine E. Since these extensive studies were unsuccessful and no dimers could be observed under a variety of biomimetic conditions, it appears that this transformation requires enzymatic catalysis in nature.

Experimental procedures, spectroscopic data and copies of NMR spectra (PDF) as well as crystallographic data of compounds 16 and 17. CIF files for 16 (CCDC 1854563) and 17 (CCDC 1854564) are available free from charge on https://www.ccdc.cam.ac.uk/structures/).

The authors thank Dr. Peter Mayer for X-ray structure analysis. Additionally, we acknowledge the Deutsche Forschungsgemeinschaft (SFB 749 and CIPSM) for generous funding. Dr. Julius R. Reyes is acknowledged for excellent support with the preparation of this article.

Combining the best of both worlds: radical-based divergent total synthesis

© 2019 Winter and Trauner; licensee Beilstein-Institut.
This is an Open Access article under the terms of the Creative Commons Attribution License (http://creativecommons.org/licenses/by/4.0). Please note that the reuse, redistribution and reproduction in particular requires that the authors and source are credited.
The license is subject to the Beilstein Journal of Organic Chemistry terms and conditions: (https://www.beilstein-journals.org/bjoc) 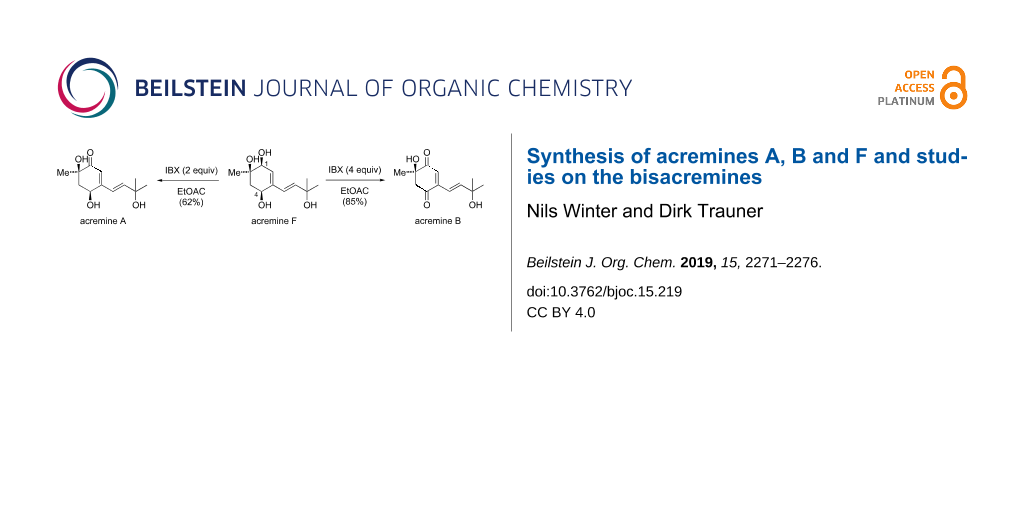