One-pot synthesis of substituted pyrrolo[3,4-b]pyridine-4,5-diones based on the reaction of N-(1-(4-hydroxy-6-methyl-2-oxo-2H-pyran-3-yl)-2-oxo-2-arylethyl)acetamide with amines


All articles from this author
Artem N. Fakhrutdinov


All articles from this author
Arkady A. Dudinov


All articles from this author
Vasily A. Migulin


All articles from this author
Elizaveta K. Melnikova


All articles from this author
Michail M. Krayushkin

The condensation of primary amines with N-(1-(4-hydroxy-6-methyl-2-oxo-2H-pyran-3-yl)-2-oxo-2-arylethyl)acetamides was explored. Thus, a previously unknown recyclization of the starting material was observed in acidic ethanol in the presence of an amine, which provided the corresponding dihydropyrrolone derivative as the major reaction product. Based on this transformation, a practical and convenient one-pot synthetic method for substituted pyrrolo[3,4-b]pyridin-5-ones could be devised.

Derivatives of pyrrolo[3,4-b]pyridin-5-one are known for their broad-spectrum biological activity [1-3]. One example includes a family of compounds based on this fragment that was tested as dipeptidyl peptidase-4 (DPP4) inhibitors [4-7]. From the obtained results, the authors suggested these compounds as effective therapeutic agents for the treatment of diabetes mellitus. Further, it was shown that several synthetic molecules with a pyrrolo[3,4-b]pyridin-5-one core display a remarkable anti-epileptic activity [8]. Additionally, compounds containing the 1H-imidazo[1’2’:1,2]pyrrolo[3,4-b]pyridine moiety were employed as herbicides [9]. At the same time, the published synthetic procedures towards the reported scaffolds were mainly specific for the individual products, with no universal methodology being presented. This limits the synthetic scope to targets carrying only certain, specific substituents. Therefore, considering the importance of the pyrrolo[3,4-b]pyridin-5-one motif, a novel, general synthetic approach to this class of organic compounds has become strongly desirable.

In this article, we describe a convenient synthetic method for the preparation of 6-alkyl-2-methyl-7-aryl-6,7-dihydro-1H-pyrrolo[3,4-b]pyridine-4,5-diones 1. Therein, the condensation of N-(1-(4-hydroxy-6-methyl-2-oxo-2H-pyran-3-yl)-2-oxo-2-arylethyl)acetamides 2 with a diverse range of amines 3 did not only furnish the desired scaffolds in satisfactory yields but also allowed to use a variety of readily available substituted substrates (Scheme 1).

The published synthesis of acetamides 2 includes a one-pot three-component reaction of 4-hydroxy-6-methyl-2H-pyran-2-one (4), arylglyoxals 5, and acetamide (6) using SnCl2–SiO2 nanoparticles as heterogeneous catalyst under solvent-free conditions [10]. However, as we found out, the use of a catalyst was unnecessary for this transformation. In turn, refluxing the reaction mixture in acetonitrile was sufficient for this reaction to proceed, furnishing target materials 2 in good yields (Scheme 2).

The established straightforward synthesis of acetamides 2 provides further access to target materials with diverse substituent patterns. It is known that in the presence of amines, pyranones undergo recyclization under formation of various nitrogen-containing heterocycles [11-16]. In order to investigate the possibility of an analogous rearrangement of the pyranone ring in 2 when being attached by an amine, we studied the model reaction of N-(2-(4-chlorophenyl)-1-(4-hydroxy-6-methyl-2-oxo-2H-pyran-3-yl)-2-oxoethyl)acetamide (2a) with 2-(4-methoxyphenyl)ethan-1-amine (3a) under different conditions, and the results are summarized in Table 1.

As can be seen in Table 1, entry 8, the most efficient conditions for the reaction of 2a and 3a were found to be the use of ethanol as solvent as well as equimolar amounts of amine species and acetic acid under reflux. At the same time, in the absence of AcOH as additive, only traces of the desired product 7a could be detected using either solvent. In addition, extending the reaction time to over 4 h under reflux led to a significant decrease in yield of the target material. Thus, optimal conditions could be established for this reaction, allowing the synthesis of enaminones 7 in moderate yields (Table 2). Note, that this is the first time for such a transformation to be reported.

There are two possible reaction pathways for the investigated conversion. The first possibility includes the attack of an amine, and pyranone ring-opening to afford the acyclic intermediate 8 (Scheme 3A). Then, the latter undergoes cyclization to intermediate diketone 9. The alternative approach includes an initial condensation of amine and aryl ketone to give the enamine intermediate 10, which can subsequently undergo opening of the pyranone ring, yielding dihydropyrrolone 9 (Scheme 3B). Following this, the diketone-containing substituent of 9 reacts with a second equivalent of amine, forming the final enaminone 7. After this general synthetic method for enaminone targets had been developed, the obtained compounds were further employed in the synthesis of pyrrolopyridinones 1.

The presence of the two key reactive groups in adjacent positions in 7, the acetamide moiety and the enaminoketone functionality, should allow for an intramolecular condensation and the formation of the target pyrrolopyridinones 1. To investigate this, first, enaminone 7a was chosen as a model compound in a test reaction in acidic medium in order to identify the most efficient conditions for the transformation to 1a (Table 3). Several organic and inorganic acids and mixtures thereof were tested for this conversion. As it was established, the choice of acid was crucial. As such, the best yield was obtained after 1 h under reflux in AcOH/HCl, 1:1, v/v (Table 3, entry 3). All other attempts, i.e., applying longer reaction times and using different acids/acid mixtures, only provided inferior results.

After having established a novel synthetic pathway to the target pyrrolopyridinone 1a, we decided to test the sequential transformation in a much more convenient, one-pot procedure. For this purpose, after completion of the first step, condensation of acetamide 2a and the corresponding amine 3a, the solvent was evaporated to give the crude enaminone 7a as a brown solid. The obtained residue was then heated in an AcOH/HCl mixture to give the target pyrrolopyridinone 1a. In addition, the described one-pot synthesis, besides from being more straightforward, provided better yields as compared to the standard two-step procedure due to circumventing the isolation of the intermediate enaminones 7. Applying this method to the whole range of substrates 2 and 3 allowed to access the target materials 1 in high yields (Table 4).

Again, the transformation of 7 to 1 may have proceeded via one of two possible routes: The two-step process might start with an intramolecular condensation of the enaminone moiety in 7, followed by acidic hydrolysis of the acetyl group, furnishing the desired pyrrolopyridinones 1 (Scheme 4A). Alternatively, these steps could be reversed in order, i.e., the hydrolysis of both enaminoketone and acetamide fragments proceeds first, followed by intramolecular cyclization (Scheme 4B).

The structure of the 4-chloro-substituted pyrrolopyrimidinone 1e was proven by single crystal X-ray analysis (Figure 1). Despite the unambiguous dominance of the pyridone-based conformation in the solid state of 1e, two tautomers of 1 might exist in solution, with the other form being a hydroxypyridine (Scheme 5). This assumption is supported by an apparent broadening of several signals in the 1H NMR spectra of 1, as shown in Supporting Information File 1.

In conclusion, a new, general synthetic pathway to various substituted pyrrolopyridinones 1 was developed. The reaction of N-(1-(4-hydroxy-6-methyl-2-oxo-2H-pyran-3-yl)-2-oxo-2-arylethyl)acetamides with a diverse family of amines was performed in two consecutive steps, without isolation of the intermediate enaminones 7. The described one-pot method combines efficiency and simplicity, granting a convenient access to the pyrrolo[3,4-b]pyridin-5-one scaffold. In addition, single crystal X-ray crystallographic analysis unequivocally confirmed the structure assigned to the obtained products.

© 2019 Melekhina et al.; licensee Beilstein-Institut.
This is an Open Access article under the terms of the Creative Commons Attribution License (http://creativecommons.org/licenses/by/4.0). Please note that the reuse, redistribution and reproduction in particular requires that the authors and source are credited.
The license is subject to the Beilstein Journal of Organic Chemistry terms and conditions: (https://www.beilstein-journals.org/bjoc) 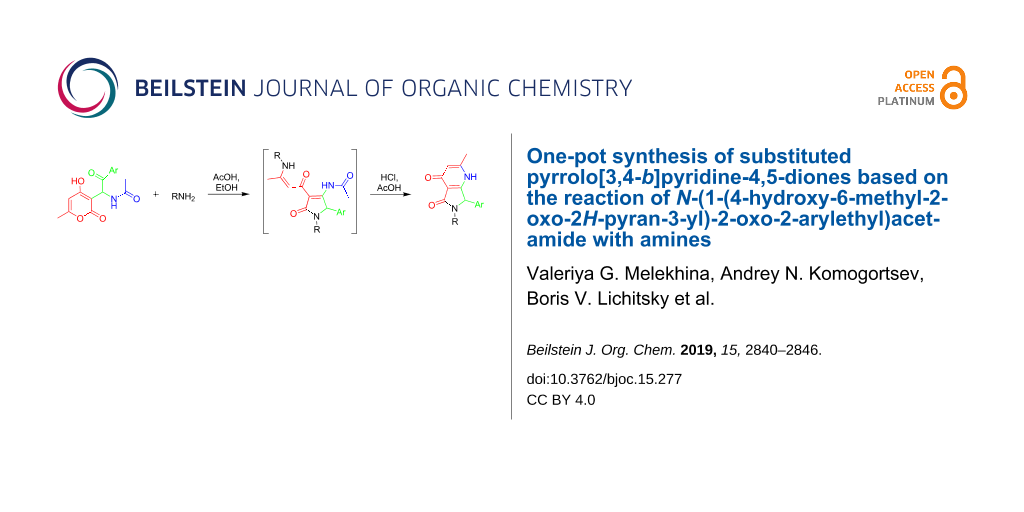