All articles from this author
Ekaterina E. Stepanova


All articles from this author
Andrey N. Maslivets

A novel approach to 1H-pyrrolo[3,2-c]pyridine-2,3-diones (5-azaisatins) has been developed via an unprecedented annulation of pyrrolo[2,1-c][1,4]benzoxazine-1,2,4-triones by thioacetamide. A new way of C–H functionalization of thioacetamide has been discovered. The reaction proceeds under green catalyst-free conditions.

Omnipresent among natural compounds and drugs, the indole core is a privileged scaffold for library design and drug discovery [1]. Its dioxo derivative, isatin (1H-indole-2,3-dione), is an important building block for the construction of diverse indole-based compounds which are in great request in medicinal chemistry as they exhibit a variety of biological activities [2-9].

5-Azaisatins (1H-pyrrolo[3,2-c]pyridine-2,3-diones) are a useful but sparingly studied kind of isatin’s aza isosteres [10-16]. Presently, few synthetic approaches towards this tempting scaffold are reported in the literature. They can be divided into two groups: oxidation of pyrrolo[3,2-c]pyridines [13,15,16] and annulation of pyridine by a pyrrole-2,3-dione moiety (cyclization of 2-(4-((alkoxycarbonyl)amino)pyridin-3-yl)-2-oxoacetates [11], interaction of 5-azaisatoic anhydride with cyanides followed by hydrolysis [10], Scheme 1).

Herein, we report a distinct synthetic approach to 5-azaisatins via annulation of pyrrole-2,3-dione by a pyridine ring based on an unprecedented interaction of 1H-pyrrole-2,3-diones with thioacetamide (Scheme 1).

In continuation of this research [17,18], and in order to extend the scope of the reaction, we attempted to involve the simplest aliphatic thioamide, thioacetamide, in the interaction with PBTs 2. As a result, we obtained the expected spiro[thiazolo-5,2'-pyrroles] 3, which were found to exist in a form with an exo-methylene group according to the NMR spectra (Scheme 3) [19]. Unfortunately, the products 3 were found to be labile and hard to isolate and purify. During our attempts to obtain pure compounds 3, we observed that their yellow acetone solutions became orange when stored for several hours in contact with the atmosphere, and after several days of storage, they had formed orange precipitates. The precipitates were isolated and analyzed. We established that they were formed by pyrrolo[3,2-c]pyridine-2,3-diones 4 (Scheme 3). The structure of compounds 4 was unequivocally confirmed by a single crystal X-ray analysis (CCDC 1877232).

We assume that the formation of compounds 4 occurred through a cascade of several reactions (Scheme 4, pathway a). The first step was the addition of thioacetamide to PBT 2 by subsequent nucleophilic attacks of S and N atoms. The formed compound 3 had a strong nucleophilic center – the exo-methylene group, which could attack the other molecule of compound 3 to substitute the S atom and form adduct A. Adduct A underwent a decomposition by releasing a molecule of compound 2 [18]. The formed compound B underwent intramolecular cyclization followed by hydrolysis of the imide group with subsequent decarboxylation and formation of the intermediate C that was oxidized by the air oxygen to form compound 4. Possibly, the formation of compound 4 proceeded through an alternative pathway (Scheme 4, pathway b). In this case, the formed compound 3 reacted with a molecule of the PBT 2 resulting in an intermediate that underwent a similar pathway to afford compound 4.

To confirm the proposed pathway and optimize the reaction conditions, we carried out a series of experiments using the PBT 2a.

Having noticed the influence of the solvent hygroscopicity, we examined the influence of water added to the reaction mixture. The experiment was carried out in acetone, DMSO, and NMP under the typical procedure conditions from Table 1 (entries 1, 8, 11); different amounts of water (10, 20, 40, 80 and 100 µL) were added to the reaction mixtures, and the yields of the desired compound 4a were determined by HPLC. As a result, we found that the addition of water did not affect the yield of compound 4a or even slightly lowered it.

Having determined the optimal conditions of the reactions, we turned our attention to the main distinction of the proposed pathways of formation of compounds 4 – the particle that interacted with the spiro[thiazolo-5,2'-pyrroles] 3. It could be either a molecule of the spiro[thiazolo-5,2'-pyrrole] 3 or a molecule of the PBT 2. To determine the most possible one, we investigated the effect of the ratio of the reagents. When we used excessive amounts of thioacetamide (fivefold excess to PBT 2a), a significant decrease in the yield of 4a was observed (in acetone the yield was 7% counting on PBT 2a). When an excessive amount of PBT 2a (double excess to thioacetamide) was used, a notable increase in yield of 4a was observed (the yield was 56% in acetone and 60% in DMSO counting on thioacetamide). These can indicate that the pathway through a PBT (Scheme 4, pathway b) is more presumable.

In addition, we carried out two more experiments in order to determine the most presumable pathway of formation of compounds 4 (Scheme 4). PBT 2a and thioacetamide (in ratio of 1:1) were kept in acetone for 20 min to afford a solution of compound 3a. To the solution obtained 1 equivalent of either PBT 2f or spiro[thiazolo-5,2'-pyrrole] 1a [18] was added (Scheme 5). When 2a was added, we observed the formation of a mixture of compounds 4a and 4f in a ratio of about 1:1, and in the case of addition of 1a, no cross-product 4f was observed (UPLC–MS). These can also confirm the pathway through a PBT 2 (Scheme 4, pathway b) to be more presumable. However, the absence of the cross-product 4f can be also attributable to the steric hindrance created by the phenyl substituent in 1a which violated the attack of the methylene group of 3a on compound 1a.

Finally, we checked the substrate scope of the reaction. We found that the reaction proceeded well with various PBTs 2 (Scheme 6).

However, our attempts to change thioacetamide for cyanothioacetamide did not give any desirable products, as corresponding spiro[thiazolo-5,2'-pyrrole] 3 was formed very slowly and readily underwent multiple side-reactions. The involvement of propanethioamide and 2-phenylethanethioamide did not give any desirable results, too. These interactions provided mixtures of three isomeric adducts possibly corresponding to two stereoisomeric adducts (cis and trans) and an extra adduct of an unidentified side-reaction (UPLC–MS data).

The interaction of PBT 2a with N-phenylthioacetamide gave very interesting results. We found that the reaction of PBT 2a and N-phenylthioacetamide (in ratios of both 2:1 and 1:1) carried out in acetone resulted in the formation of compound 5 (Scheme 7). The structure of compound 5 was proved by X-ray analysis (CCDC 1879686). Obviously, compound 5 corresponds to an intermediate proposed in pathway b (Scheme 4) which is one more evidence to support this pathway. Unfortunately, we did not succeed to transform compound 5 in the corresponding 1H-pyrrolo[3,2-c]pyridine-2,3-dione 4l. The most possible explanation of this fact is the steric hindrance introduced by the N-phenyl substituent, which obstructs the thiazole ring opening.

In summary, we have developed a novel approach to 1H-pyrrolo[3,2-c]pyridine-2,3-diones (5-azaisatins) via unprecedented annulation of pyrrolo[2,1-c][1,4]benzoxazine-1,2,4-triones by thioacetamide. The reaction proceeds under green catalyst-free conditions, at room temperature and air atmosphere. The products can be easily isolated directly from the reaction mixture without use of column chromatography. Moreover, the resulting compounds may be of pharmaceutical interest and can be starting materials for the synthesis of various aza analogs of isatin-based heterocycles. It also should be mentioned that we have observed an interesting thioacetamide-based reactive intermediate that can possibly serve for a catalyst-free C–H functionalization of thioacetamide and mild introduction of this fragment in other molecules, which is valuable in terms of synthetic organic chemistry.

The study was performed under the financial support of the Russian Ministry of Education and Science (project no. 4.6774.2017/8.9) and the Government of Perm Krai.

© 2019 Kobelev et al.; licensee Beilstein-Institut.
This is an Open Access article under the terms of the Creative Commons Attribution License (http://creativecommons.org/licenses/by/4.0). Please note that the reuse, redistribution and reproduction in particular requires that the authors and source are credited.
The license is subject to the Beilstein Journal of Organic Chemistry terms and conditions: (https://www.beilstein-journals.org/bjoc) 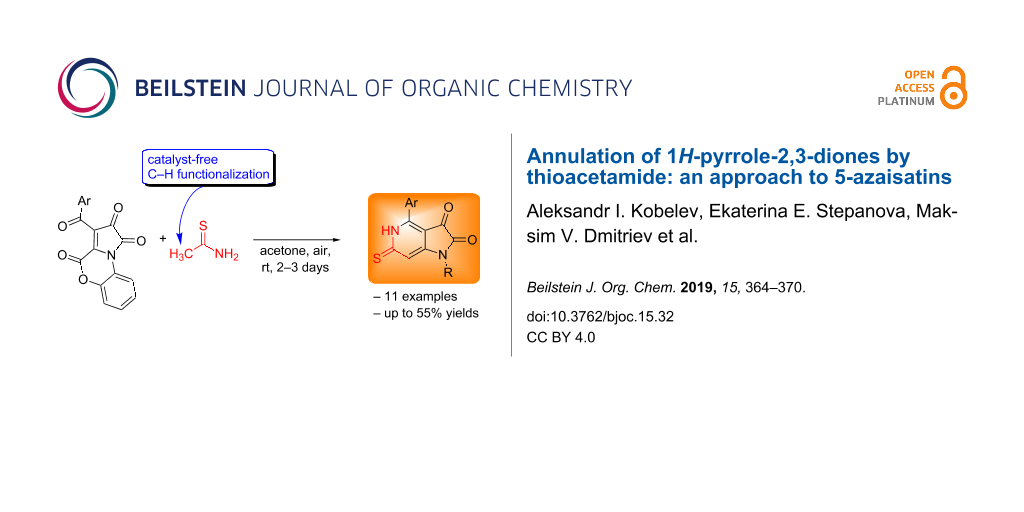