All articles from this author
Eglė Arbačiauskienė

Fused pyrazole ring systems are common structural motifs of numerous pharmaceutically important compounds. Nevertheless, access to derivatives of the aromatic 2H-furo[2,3-c]pyrazole ring system is still quite limited, and their chemistry and functional properties remain largely underexplored. The current study investigates routes to construct this system from easily accessible starting materials using metal-catalyzed reactions. A simple and efficient procedure to access the 2H-furo[2,3-c]pyrazole ring system was developed by employing the silver(I) ion-mediated ring-closure reaction of 4-alkynyl-3-hydroxy-1-phenyl-1H-pyrazoles as a key step. The required intermediate hydroxyalkynyl substrates for this reaction were prepared by a Pd-catalyzed coupling of 4-iodo-1-phenyl-1H-pyrazol-3-ol with ethyne derivatives. The structures of the obtained target compounds were unequivocally confirmed by detailed 1H, 13C and 15N NMR spectroscopic experiments, HRMS and a single-crystal X-ray diffraction analyses. This silver(I)-mediated 5-endo-dig cyclization of readily available 4-alkynyl-3-hydroxy-1H-pyrazoles can be used as an efficient method to access many novel 2,5-disubstituted 2H-furo[2,3-c]pyrazoles.

Heterocyclic ring systems possessing a pyrazole ring fused to an oxygen-containing six-membered heterocycle are present in a wide variety of biologically active compounds. For example, the 1,4- and 2,4-dihydropyrano[2,3-c]pyrazole ring systems [1] often represent the main structural motifs of anticancer [2-4], anti-inflammatory [5], and antidiabetic agents [6]. The numerous known methods for the preparation of these compounds are generally based on multicomponent reactions of an aromatic aldehyde, a β-keto ester, a hydrazine and malononitrile [7]. In a similar reaction using a pyridinium ylide instead of malononitrile, the dihydro-1H-furo[2,3-c]pyrazole system, consisting of an aromatic pyrazole ring fused with a five-membered 2,3-dihydrofuran ring, was formed [8]. Derivatives of the latter system are known for their antimicrobial [9] and antiproliferative activities [10]. Nevertheless, methods to access 2H-furo[2,3-c]pyrazoles, where both the fused pyrazole and furan moieties are aromatic, are still quite limited, and their chemistry and functional properties remain largely underexplored. Huang et al. have reported the synthesis and the evaluation of antiplatelet and anti-allergic activities of 2,3,4-trisubstituted 2H-furo[2,3-c]pyrazole-5-carboxylic acids and related carboxamides [11,12]. The aforementioned carboxylic acids have been prepared by bromination of the corresponding pyrano[2,3-c]pyrazol-6(1H)-one derivatives followed by heating of the obtained 5-bromo derivatives in the presence of sodium alkoxide [11]. Notably, the 2H-furo[2,3-c]pyrazole ring system is structurally similar to the benzo[b]furan system, which is a privileged motif in natural products and biologically active compounds [13,14]. As a result, numerous strategies have been developed for the construction of benzo[b]furan and its derivatives [15-18]. For example, Damera et al. reported an efficient synthesis of 2-substituted benzo[b]furans with good yields by the base-promoted cyclization of easily accessible 2-alkynylphenols [19]. Recently, 2-arylbenzo[b]furans were conveniently synthesized by the one-pot tandem Hiyama alkynylation/cyclization reaction between 2-iodophenol and (triethoxysilyl)alkynes [20]. In recent years silver and gold salts have found application as versatile and mild catalysts to access the benzo[b]furan ring system through intramolecular cyclization of 2-alkynylphenol substrates [21], including preparation of 2-benzofuranmethanamines [22] and 4-indolylbenzo[b]furans [23] in the presence of AgNO3 and AgOTf, respectively, and 2-phenylbenzo[b]furans, where AuCl3 or a mixture thereof with AgOTf has been used to promote the appropriate cyclization [24].

In the present work, we describe a method for the construction of the 2H-furo[2,3-c]pyrazole ring system by a Sonogashira-type alkynylation of 4-iodopyrazol-3-ol and subsequent intramolecular 5-endo-dig cyclization of the obtained hydroxyalkynyl substrate mediated by a Ag(I) catalyst.

The synthetic strategy designed to construct the 2H-furo[2,3-c]pyrazole ring system employs a hydroxyethynyl substrate that contains adjacent ethyne and hydroxy groups on the pyrazole core (Scheme 1). As a starting material, we used 1-phenyl-1H-pyrazol-3-ol (1), which is readily accessible from the oxidation of 1-phenyl-3-pyrazolidinone [25,26]. Recently, we used this scaffold to obtain the 2H-pyrazolo[4,3-c]pyridine [27,28], pyrazolo[4,3-f][1,2,3]triazolo[5,1-c][1,4]oxazepine [29] and pyrazolo[4’,3’:3,4]pyrido[1,2-a]benzimidazole [30] ring systems as well as to prepare building blocks for the construction of optoelectronic materials and fluorescent organic nanoparticles [31-34].

The iodination of 1 with iodine in the presence of KOH in DMF afforded 4-iodo-1H-pyrazol-3-ol 2 [26]. We have previously shown that the Sonogashira-type coupling of the aforementioned iodinated compound with phenylacetylene under standard reaction conditions (Pd(PPh3)2Cl2, CuI, and TEA) gives 4-(phenylethynyl)-substituted pyrazolol 3a [26]. When various het(aryl)- and alkylacetylenes were used in the coupling with 2 under the same reaction conditions, compounds 3b–j were obtained in 64–85% yield (Scheme 1).

Having prepared the series of hydroxyethynyl substrates 3a–j, the optimal conditions for the subsequent cyclization reaction were next investigated using 3a as the model compound (Table 1). First, we attempted the desired cyclization of 3a to 2H-furo[2,3-c]pyrazole 4a using the synthetic protocol involving Cs2CO3 in dry DMF at 60 °C, which has been previously successfully employed for the preparation of benzo[b]furans by the cyclization of o-alkynylphenols [19]. Unfortunately, no addition of the hydroxy group across the carbon–carbon triple bond was observed even after heating the reaction mixture under analogous reaction conditions for 24 hours (Table 1, entry 1).

The formation through a 5-endo-dig cyclization of some amount of compound 4a was detected by LC–MS measurements only when the reaction mixture contained Cs2CO3 as a base and was heated at 120 °C for 4 days (Table 1, entry 2). Surprisingly, when K2CO3 was used instead of Cs2CO3, the desired 2-phenyl-2H-furo[2,3-c]pyrazole was obtained in a significantly higher yield (47%, Table 1, entry 3).

Some of the most effective catalysts for the electrophilic activation of alkynes under homogeneous conditions are gold(I) [35] and silver(I) [36] salts or complexes, and a broad range of versatile synthetic methods has been developed for the construction of carbon–heteroatom bonds using these types of catalysts. For example, the gold(I) catalyst [(Ph3PAu)3O]BF4 was applied in the regioselective intramolecular cyclization of alkynols to construct bicyclic ethers [37], while the silver(I) catalyst AgOTf efficiently catalyzed the intramolecular cyclization of phenoxyethynyl diols into 2,3-unsaturated lactones [38]. In our case, the addition of 10 mol % chloro(triphenylphosphine)gold(I) improved the yield of product 4a to 69% (Table 1, entry 4). However the best results were obtained when AgOTf was used as a catalyst. In this case, the target product 4a was obtained in an excellent 92% yield (Table 1, entry 5).

It is important to note that the reaction temperature had a significant effect on the yield of the product. When the temperature was lowered to 80 °C, the yield of the product did not exceeded 15% (Table 1, entry 6). The presence of a base also plays a crucial role in the cyclization described herein, and the transformation of 3a to 4a did not occur in the presence of only the catalyst and without base (Table 1, entry 7). Finally, the reaction optimization experiments showed that the Cs2CO3/AgOTf system does not offer any advantages for this cyclization compared to the K2CO3/AgOTf system (Table 1, entry 8).

With the optimized conditions for the 5-endo-dig cyclization reaction identified, the scope of this transformation for the preparation of several 2,5-disubstituted 2H-furo[2,3-c]pyrazoles was explored (Scheme 2). For substrates 3b–j, the reactions were complete after 14 hours at 120 °C, and products 4b–j were generated in fair to excellent yields.

The structure of 4d was investigated additionally by single crystal X-ray analysis (Figure 1) [39].

The molecules in the crystal are located in columns made up of asymmetric units held by hydrogen bonds (Figure 1b).

In conclusion, we have demonstrated a new, three-step synthetic route to 2H-furo[2,3-c]pyrazoles starting from commercially available 1-phenylpyrazol-3-ol. Iodination of the latter compound with iodine in DMF smoothly afforded 1-phenyl-4-iodopyrazol-3-ol, which can undergo a Pd-catalyzed coupling with terminal alkynes to give the corresponding 4-alkynyl-3-hydroxy-1-phenyl-1H-pyrazoles. The desired 5-endo-dig cyclization leading to the formation of the 2H-furo[2,3-c]pyrazole ring system is easily achieved by heating the aforementioned hydroxyalkynyl substrates with a base in DMF in the presence of a silver(I) catalyst.

© 2019 Milišiūnaitė et al.; licensee Beilstein-Institut.
This is an Open Access article under the terms of the Creative Commons Attribution License (http://creativecommons.org/licenses/by/4.0). Please note that the reuse, redistribution and reproduction in particular requires that the authors and source are credited.
The license is subject to the Beilstein Journal of Organic Chemistry terms and conditions: (https://www.beilstein-journals.org/bjoc) 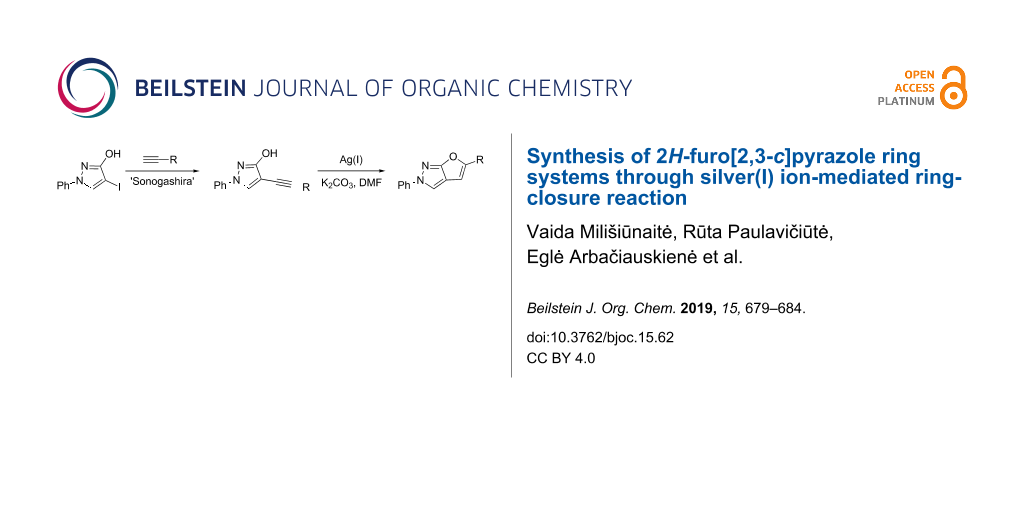