All articles from this author
Yuan Gao


All articles from this author
Meng-Meng Zhang


All articles from this author
Li Sheng


All articles from this author
Jia Li


All articles from this author
Xu-Wen Li

A detailed chemical investigation of the South China Sea soft corals Clavularia viridis and Lemnalia flava yielded four new halogenated laurane-type sesquiterpenoids, namely, isobromolaurenisol (1), clalaurenol A (2), ent-laurenisol (3), clalaurenol B (4), and the new aromadendrane-type sesquiterpenoid claaromadendrene (6), together with three known sesquiterpenoids (5, 7, and 8). Their structures were determined by extensive spectroscopic analysis and by comparison with the previously reported analogues. In a bioassay, compounds 1, 2 and 4 exhibited interesting inhibitory activities in vitro against PTP1B and NF-κB.

Marine soft corals are important sources of biologically active compounds, which made them attractive targets for natural product chemists. Soft corals of the genus Clavularia (class Octocorallia, order Alcyonacea, family Clavulariidea), are prolific sources of numerous biologically active compounds [1-4]. A variety of structurally unique sesquiterpenes, including aromadendranes [5], maalianes [5], elemanes [6], and trinor-guaianes [7-9], have been isolated since the early 1980s from several species of Clavularia. Soft corals of the genus Lemnalia are also a rich source of sesquiterpenoids and diterpenoids with various intriguing carbon skeletons, such as nardosinanes, neolemnanes, and ylanganes [10]. Many of these secondary metabolites have attracted a lot of attention for further synthetic and pharmacological studies due to their potent bioactivities ranging from neuroprotective, cytotoxic, to anti-inflammatory properties [10].

In the framework of our ongoing research for the bioactive metabolites from South China Sea soft corals [11,12], we made the collection of the title samples Clavularia viridis and Lemnalia flava off the Xisha Islands, Hainan Province, China. The chemical investigation of two title animals led to the isolation of four new halogenated laurane-type sesquiterpenoids 1–4, one new aromadendrane-type sesquiterpenoid 6) together with three related known compounds 5, 7 and 8 (Figure 1). Herein, the isolation, structure elucidation and bioactivity evaluation of these compounds are presented.

Isobromolaurenisol (1) was obtained as an optically active colorless oil. Its molecular formula, C15H18OBr2, was deduced by HR-ESIMS with ion peaks at m/z 370.9657, [M − H]– (calcd for C15H17OBr2, 370.9646), indicating six degrees of unsaturation. The 13C NMR and DEPT spectra contained signals attributable to three methyls, two sp3 methylenes, one sp3 methine, one sp3 quaternary carbon, three sp2 methines, and five sp2 quaternary carbons (Table 1). The typical resonances at δC 145.6, δC 113.0, δH/C 7.30/136.8, δC 123.4, δC 153.0, δH/C 6.71/116.8 revealed the presence of a 1,2,4,5-tetrasubstituted benzene ring, and the signals at δH/C 6.08/99.1, δC 154.2 indicated the existence of a trisubstituted double bond. All the above evidence suggested the laurane nature of this molecule, and literature research revealed that 1 should be an isomer of a known laurane-type terpenoid bromolaurenisol (1a) [16,17] due to their extremely similar NMR data and the same molecular weight (Figure 1). In fact, the main difference between 1 and 1a happened only at the tetrasubstituted benzene ring with the substituents exchange between C-7 and C-10 (Figure 1). The assignment of the planar structure of 1 has been further confirmed by 2D NMR experiments, including 1H,1H COSY, HSQC, and HMBC, with the key correlations shown in Figure 2. In particular, the hydroxy group (δH 4.68, s) was confirmed to be attached at C-10 by the clear HMBC correlation from OH to C-10 and C-11.

Compound 2 was isolated as an optically active colorless oil. The molecular formula, C15H19OBr, was established by the molecular ion peak at m/z 293.0548, [M − H]− (calcd for C15H18OBr 293.0541) in the HR-ESIMS spectrum. The 1H and 13C NMR spectra showed great similarities with those of the co-occurring 1, which indicated the same laurane skeleton. In fact, compound 2 differed from 1 only by the debromonation at the C-15 position, which was in agree with the lack of 78/80 units in its mass compared to that of 1. The planar structure of 2 was further confirmed by its 2D NMR data (Figure 2). The relative configurations of the chiral centers on the cyclopentane ring were determined to be the same as 1 by inspection of the proton coupling constants (Table 1) and NOESY experiments (Figure 3). Thus, compound 2 was determined to be the debrominated derivative of 1, namely, clalaurenol A.

A# and B#, representing oleanolic acid and bortezomib, respectively, were used as the positive controls.

In summary, eight sesquiterpenoids (1–8), belonging to four different structural types, were isolated from two South China Sea soft corals (C. viridis and L. flava) for the first time. The discovery of these metabolites extended the structural diversity and complexity of sesquiterpenoids derived from soft corals C. viridis and L. flava. In fact, to our knowledge, naturally occurring laurane- (1–4) and cuparane-derived (5) sesquiterpenoids, are extremely rare in soft corals. Previously, such sesquiterpenoids have only been isolated from the red algae of the genus Laurencia [14,16,17,21] and some sea hares that prey on it [13,22]. In this paper, the chemical investigation of two different soft corals collected off the South China Sea, which belong to two different genera, have resulted in the discovery of two common new halogenated laurane-type sesquiterpenoids (3 and 4). Based on these findings, other than prey–predator relationship, the common symbiotic organisms in the algae and the soft corals might be the source of these metabolites. In fact, many investigations have proved that [23] numerous natural products are actually produced by microbes and/or microbial interactions with the “host from whence it was isolated”. Further chemical investigation of these soft corals in the South China Sea as well as their associated microorganisms should be conducted to verify the true origin of these metabolites and to further understand the real biological/ecological roles they played in the life cycle of the title animals in the South China Sea.

Optical rotations were measured on a Perkin-Elmer 241MC polarimeter. IR spectra were recorded on a Nicolet-Magna FT-IR 750 spectrometer. EIMS and HR-EIMS spectra were recorded on a Finnigan-MAT-95 mass spectrometer. HR-ESIMS spectra were recorded on a Q-TOF Micro LC–MS–MS mass spectrometer. The NMR spectra were measured on a Bruker DRX-500 spectrometer with the residual CHCl3 (δH 7.26 ppm, δC 77.2 ppm) as internal standard. Chemical shifts are expressed in δ (ppm) and coupling constants (J) in Hz. 1H and 13C NMR assignments were supported by 1H,1H COSY, HSQC, HMBC and NOESY experiments. Commercial silica gel (Qing Dao Hai Yang Chemical Group Co., 300–400 and 500–600 mesh) and Sephadex LH-20 (Amersham Biosciences) were used for column chromatography. Precoated silica gel GF254 plates (Sinopharm Chemical Reagent Co., Shanghai, China) were used for TLC. Reversed-phase (RP) HPLC purification was carried out on an Agilent 1260 series liquid chromatography system equipped with a DAD G1315D detector at 210 and 254 nm and with a semi-preparative ODS-HG-5 column [5 μm, 250 × 9.4 mm]. All solvents used for CC were of analytical grade, and solvents used for HPLC were of HPLC grade.

The soft corals C. viridis and L. flava were collected by scuba from Xisha Island, Hainan Province, China, in March 23, 2013, at a depth of −15 to −20 m, and identified by Professor Xiu-Bao Li from Hainan University. The voucher samples, both C. viridis and L. flava are deposited at the Shanghai Institute of Materia Medica, CAS, under registration Nos. 13XS-49 and 13XS-52, respectively.

The frozen animals L. flava (350 g, dry weight) were cut into pieces and extracted exhaustively with acetone at room temperature (6 × 2.0 L). The organic extract was evaporated to give a brown residue, which was then partitioned between H2O and Et2O. The upper layer was concentrated under reduced pressure to give a brown residue 8.0 g. The resulted residue was separated into seven fractions (A–G) by gradient silica-gel CC. The resulting fractions were then fractionated into sub-fractions by Sephadex LH-20. The sub-fraction C5 was purified by Semi-preparative HPLC (87% MeOH), yielding compounds 3 (8.6 mg) and 4 (2.3 mg).

The recombinant PTP1B catalytic domain was expressed and purified according to a previous report [24]. The enzymatic activities of the PTP1B catalytic domain were determined at 30 °C by monitoring the hydrolysis of pNPP. Dephosphorylation of pNPP generated the product pNP, which was monitored at an absorbance of 405 nm with an EnVision multilabel plate reader (Perkin–Elmer Life Sciences, Boston, MA). In a typical 100 L assay mixture containing 50 mmol/L 3-morpholinopropanesulfonic acid, pH 6.5, 2 mmol/L pNPP, and 30 nmol/L recombinant PTP1B, activities were continuously monitored and the initial rate of hydrolysis was determined by using the early linear region of the enzymatic reaction kinetic curve. The IC50 was calculated with Prism 4 software (Graphpad, San Diego, CA) from the nonlinear curve fitting of the percentage of inhibition (% inhibition) vs the inhibitor concentration [I] by using the following equation: % inhibition = 1/(1 + [IC50/[I]]k), where k is the Hill coefficient; IC50 ≥ 50 μM was considered inactive.

NF-κB signaling pathway inhibitory activity was evaluated according to the previously reported protocol [25]. Stable HEK293/NF-κB cells were plated into 384-well plates at a concentration of approximate 2500 cells per well. After culturing overnight, compounds were added to the medium at a final concentration of 0.1 μg/mL. HEK293/NF-κB cells were seeded into 96-well cell culture plates (Corning, NY, USA) and allowed to grow for 24 h. The cells were then treated with compounds, followed by stimulation with TNF-α. 6 h later, the luciferase substrate was added to each well, and the released luciferin signal was detected using an EnVision microplate reader. The IC50 was calculated with Prism 4 software (Graphpad, San Diego, CA) from the nonlinear curve fitting of the percentage of inhibition (% inhibition) versus the inhibitor concentration [I] by using the following equation: % inhibition = 100/(1 + [IC50/[I]]k), where k is the Hill coefficient. Bortezomib was used as a positive control with an IC50 value of 14.0 μM.

© 2019 Wu et al.; licensee Beilstein-Institut.
This is an Open Access article under the terms of the Creative Commons Attribution License (http://creativecommons.org/licenses/by/4.0). Please note that the reuse, redistribution and reproduction in particular requires that the authors and source are credited.
The license is subject to the Beilstein Journal of Organic Chemistry terms and conditions: (https://www.beilstein-journals.org/bjoc) 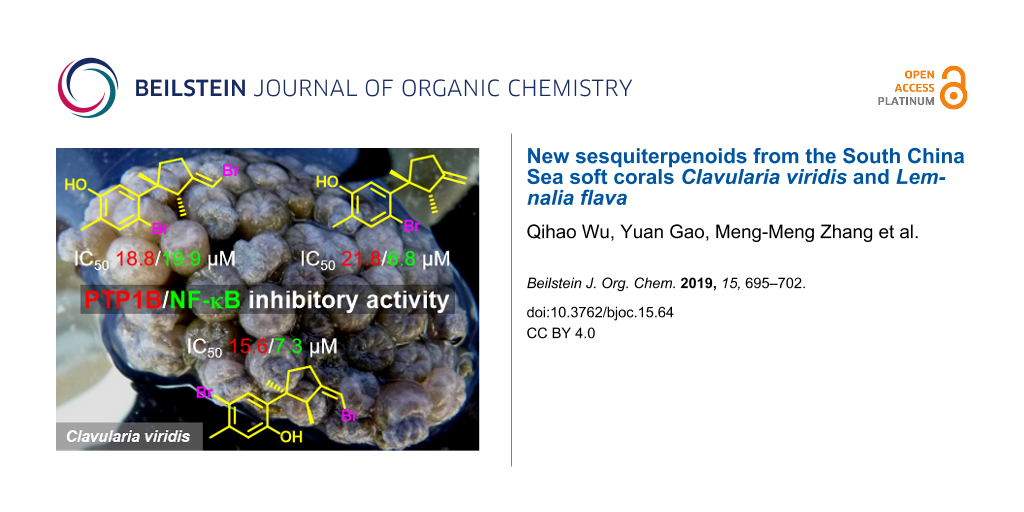