4-Hydroxy-3-methyl-2(1H)-quinolone, originally discovered from a Brassicaceae plant, produced by a soil bacterium of the genus Burkholderia sp.: determination of a preferred tautomer and antioxidant activity


All articles from this author
Yoichi Kurokawa


All articles from this author
Yasuhiro Igarashi

4-Hydroxy-3-methyl-2(1H)-quinolone (1), a molecule known for a long time and recently discovered from a Brassicaceae plant Isatis tinctoria without providing sufficient evidence to support the structure, was isolated from a fermentation extract of Burkholderia sp. 3Y-MMP isolated from a soil by a Zn2+ enrichment culture. Detailed spectroscopic analyses by MS and NMR, combined with 13C chemical shift comparison with literature values of the related compounds and a synthetic preparation of 1, allowed its first full NMR characterization and identification of 2-quinolone but not 2-quinolinol (2) as the preferred tautomer for this heterocyclic system. While the metal-chelating activity was negligible, compound 1 at 10 μM, a concentration lower than that in liquid production cultures, quenched hydroxy radical-induced chemiluminescence emitted by luminol by 86%. Because some Burkholderia species are pathogenic to plants and animals, the above result suggests that 1 is a potential antioxidant to counteract reactive oxygen species-based immune response in the host organisms.

4-Hydroxy-2(1H)-quinolone (3) is a unique structural motif mostly found in alkaloids from rutaceous plants (family Rutaceae) [1,2]. This motif has several tautomeric forms including 2,4-dihydroxyquinoline (4) [3-5], although which form to be taken seems not always be correctly identified in some of the studies [6-8]. Currently, 229 compounds are known to contain this unit as a part or a whole of the structure, among which only 12 originated from organisms other than rutaceous plants [9]. Examples from microbes include chymase inhibitors SF2809-I to VI from an actinomycete of the genus Dactylosporangium [10], a quorum sensing signaling molecule 2,4-dihydroxyquinoline (DHQ, 4) from Gram-negative bacteria Pseudomonas aeruginosa and Burkholderia thailandensis, [7], and 4-O-β-ᴅ-glucopyranosyl-2,3,4-trihydroxyquinoline (5) from an ascomycete of the genus Alternaria [8].

The genus Burkholderia sensu lato, within the class Betaproteobacteria, represents a polyphyletic group of bacteria, which undergoes reclassification into several lineages [11]. Members of this group are basically free-living aerobes inhabiting soil and freshwater, but some are also found in the tissues of animals, plants, or fungi as pathogens or beneficial symbionts [12]. Not only as the subjects of human/animal health care and plant pathology [13], but they are now gathering significant attention as an emerging source of bioactive molecules. Many new structure classes, even after being spun off as a new genus from Pseudomonas in 1992 [14], have been discovered from this group, which, along with their large genomes comparable to those of actinomycetes or myxobacteria, demonstrate a higher capacity of secondary metabolism [15].

In the course of our continuing studies on bioactive metabolites of less studied bacterial taxa [16], Burkholderia sp. 3Y-MMP, isolated from soil by an exhaustive enrichment culture under Zn2+-load, was selected for a detailed chemical study, which resulted in the isolation of 4-hydroxy-3-methyl-2(1H)-quinolone (1, Figure 1). This compound was recently reported from the root of woad (Isatis tinctoria, family Brassicaceae) with no details of structure characterization [17]. Herein we describe the isolation, unequivocal structure characterization, and antioxidant activity of compound 1.

The producing strain 3Y-MMP was cultured in King’s B medium [18] for 4 days and the production culture was extracted with 1-BuOH. The butanolic extract was partitioned between CH2Cl2 and 60% MeOH, and the latter layer was flash-chromatographed on ODS followed by reversed-phase HPLC to yield 1 (5.2 mg) with sufficient purity for structure characterization.

The molecular formula of 1 was determined to be C10H9NO2 based on a sodium adduct molecular ion peak at m/z 198.0525 observed by a HRESITOFMS measurement (calcd 198.0526). The broad IR absorption band around 3100 cm−1 and an intense peak at 1600 cm−1 indicated the existence of hydroxy and aromatic groups, respectively.

aSignal for amide proton not observed.

Although compound 1 has repeatedly been synthesized since 1921 [23] and enumerated chemical shifts for 1H and 13C resonances were available [24], one-on-one assignments of the resonances to each structural part have not been made until this work. In addition, HMBC correlations from the enol proton and the comparison of the chemical shift of the carbon adjacent to the nitrogen with the literature values unequivocally determined 2-quinolone to be a preferred tautomer of this heterocyclic system. The same C8a carbons of compounds 4 and 5 resonate at 139.2 [25] and 133.4 ppm [8], respectively (Figure 1 and Figure 2), which indicates that both also exist as 2-quinolone and hence should more precisely be called as 4-hydroxy-2(1H)-quinolone (4HQ, 3) and 4-O-β-ᴅ-glucopyranosyl-3,4-dihydroxy-2-quinolone (10), respectively.

Though not alkylated, the close structural similarity to 3 suggests that 1 is also a member of the 2-alkyl-4-quinolone class signaling molecules/antibiotics known from Pseudomonas aeruginosa and some Burkholderia species [26,27]. Quinolones of this class are classified into two lineages, those with or without a 3-methyl group, and the former lineages are unique to Burkholderia producers [28]. These metabolites are shown to be biosynthesized by head-to-head condensation of anthranilate and β-ketoacylate precursors, followed by a modification at C3 or nitrogen by putative monooxygenases or methyltransferase [27]. Entry of malonate as the acylate precursor into this pathway is proposed to yield 3 (4 in the original literature) [29]. Thus, 1 is very likely to be biosynthesized by the same mechanism followed by additional methylation on C3.

Oxidative burst, which is a transient production of massive reactive oxygen species (ROS), is implemented in eukaryotic cells, including protists [32], as an innate immune response to deactivate foreign substances or as part of phagocytic digestion of internalized nutrients [33]. Pathogenic microbes are equipped with a multitude of strategies to circumvent host immunity [33], among which redox enzymes and antioxidants are the direct countermeasures to neutralize the toxicity of ROS [34]. Limited examples of antioxidants include catecholamine melanin from a fungus Cryptococcus neoformans [35], 1,8-dihydroxynaphthalene melanin from fungi Wangiella dermatitidis and Alternaria alternata [36], staphyloxanthin from a firmicute Staphylococcus aureus [37], vitamin B6 from fungi Cercospora nicotianae, [38] and Rhizoctonia solani [39], and a melanin-like pigment from Burkholderia cenocepacia [40].

The antioxidant activity of 1 was evaluated using the luminol chemiluminescence extinction assay [41,42]. This assay quantifies the presence of the most detrimental ROS, hydroxy radical [43,44], as intensity of luminescence emitted by oxidation of luminol. Compound 1 at 10 μM, which is lower than a concentration in production liquid cultures (15 μM), decreased luminescence to 14% of the control reaction (Figure 3). Because the Fenton reaction catalyzed by Cu2+ was used to generate the hydroxy radicals, entrapment of Cu2+ by 1 was initially suspected as the mechanism of chemiluminescence inhibition. However, this speculation was ruled out by a titration experiment using Chrome Azurol S-Fe3+ (CAS) [45], which required a 1600 times higher concentration for metal-chelation. Thus, compound 1 was found to be another example of the antioxidant from Burkholderia. Detailed studies on the antioxidation mechanism of 1 is now underway.

UV and IR spectra were obtained on a Hitachi U-3210 and a Perkin Elmer Spectrum 100, respectively. NMR spectra were collected on a Bruker AVANCE 500 spectrometer in DMSO-d6 and CDCl3 referenced at δH/δC 2.49/39.8 and 7.27/77.0, respectively. HRESITOFMS were recorded on a Bruker micrOTOF focus mass spectrometer. Chemiluminescence was measured on a Molecular Devices SpectraMax M2 microplate reader.

Burkholderia sp. 3Y-MMP was isolated from a soil sample collected in Toyama, central Japan, in June 2015 by a procedure similar to that described in [46]. One mM of ZnCl2, instead of CoCl2, was used as a selection pressure during the initial exhaustive enrichment culture stage. The 16S rDNA sequence of strain 3Y-MMP was determined by a DNA analysis service (Tsuruga Bio, Toyobo Co. Ltd., Osaka, Japan) using a primer set 10F (5′-GTTTGATCCTGGCTCA-3′) and 800R (5′-TACCAGGGTATCTAATCC-3′). A partial sequence with a length of 800 bp (accession number LC508727) thus read was queried against the Basic Local Alignment Search Tool program (BLAST) available at the DNA Data Bank of Japan (DDBJ) website, which reported 99.9% homology to Burkholderia cepacia strain N1_1_43 (accession number MN691134). This strain will be deposited in NBRC once it resumes services, which is currently suspended due to a nation-wide State of Emergency regarding COVID-19 declared on April 16 by the Government of Japan.

The iron-binding activity was evaluated by the CAS assay developed by Schwyn and Neilands [45]. Compound 1 (2.5 mg) in DMSO (20 μL) was mixed with a blue-colored CAS stock solution (50 μL) and further brought up to 100 μL with H2O (final concentration of 1: 160 mM). After 10 min at an ambient temperature, the solution turned orange due to the loss of Fe3+ from the indicator CAS dye, indicating positive to the iron-binding ability of 1. A prolonged reaction caused biphasic separation of the mixture.

The antimicrobial activity was evaluated by the method described previously [16].

The antioxidant activity was evaluated by the method described in [41]. Briefly, luminol (10 μM), H2O2 (1000 μM), and vehicle solvent with or without test compounds were mixed in 50 mM boric acid/sodium hydroxide buffer (pH 9.0). To this mixture was added CuCl2 (100 μM) to initiate the Fenton reaction, and after 5 min of incubation, the chemiluminescence at 500 nm was recorded on a microplate reader. The experiments were run in triplicate, and the mean ratio of light extinction was expressed as the potency of antioxidant activity. 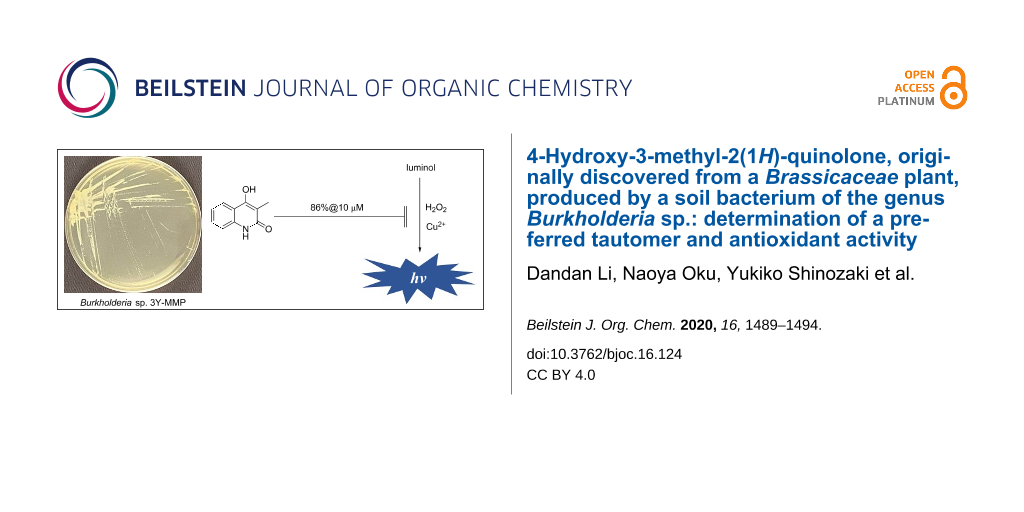