All articles from this author
Mark D. Greenhalgh

The N-heterocyclic carbene (NHC)-catalyzed formal [2 + 2] cycloaddition between α-aroyloxyaldehydes and trifluoroacetophenones, followed by ring opening with an amine or a reducing agent is described. The resulting β-trifluoromethyl-β-hydroxyamide and alcohol products are produced with reasonable diastereocontrol (typically ≈70:30 dr) and excellent enantioselectivity, and they can be isolated in moderate to good yield as a single diastereoisomer.

The trifluoromethyl unit holds a prominent and privileged position within organic chemistry [1-6]. The incorporation of this motif is widely employed within the pharmaceutical, agrochemical, and materials industries as it can be used strategically to increase lipophilicity as well as to enhance metabolic stability and binding selectivity [7-9]. In this context, the generation of effective and practical methodologies capable of the enantioselective incorporation of the trifluoromethyl unit into organic molecules has been developed widely [10-12], with a series of elegant organocatalytic strategies utilized toward these aims [13]. One general strategy for the organocatalytic construction of stereogenic trifluoromethyl centers is through enantioselective addition of enolates or their equivalents to prochiral trifluoromethyl ketones (Figure 1A). Within this area, a common catalytic approach has utilized aliphatic ketones as enolate equivalents using prolinamide, cinchona, or hybrid catalysts that proceed via enamine intermediates (Figure 1B) [14-19]. The state of the art within this area has been recently demonstrated by Dixon and co-workers, who showed that bifunctional BIMP catalysts could promote the enantioselective addition of typically recalcitrant aryl ketones to trifluoromethyl ketones (Figure 1C) [20].

Over the last twenty years, NHCs have been widely exploited as highly efficient organocatalysts that have found use in numerous applications and were the subject of many extensive reviews [21-26]. Among the most common reactive intermediates generated using NHCs, the azolium enolate has been widely used [27,28]. Methods to generate azolium enolates from a number of precursors have been reported, including the use of ketenes [29,30], α-functionalized aldehydes [31-35], enals [36-38], aryl esters [39-42], or aldehydes [43-45] in the presence of an oxidant. As representative examples of the use of azolium enolates in reactions with trifluoroacetophenone derivatives, Ye and co-workers have shown that using disubstituted ketenes as azolium enolate precursors and NHC precatalyst 1 allowed access to trifluoromethyl-substituted β-lactone products in a high yield, diastereo-, and enantioselectivity (Figure 2A) [46]. Chi and co-workers have reported limited examples of oxidative [2 + 2] cycloadditions using hydrocinnamaldehyde as an azolium enolate precursor and the NHC precatalyst 2, giving β-lactone products in high enantioselectivity but requiring superstoichiometric quantities of quinone as an oxidant (Figure 2B) [47]. In our previous work, we have developed α-aroyloxyaldehydes as reactive, bench-stable precursors of azolium enolates [48-53], which can be synthesized in a single step from the desired aldehyde [54]. We have previously applied these precursors in the NHC-catalyzed formal [2 + 2] cycloadditions between α-aroyloxyaldehydes and perfluoroalkyl-substituted ketones using NHC precatalyst 3 to produce polyfluorinated oxetanes and β-perfluoroalkyl-β-hydroxyamides after derivatization [55]. In this paper, this formal [2 + 2] protocol is extended to the use of trifluoroacetophenones to develop an enantioselective route to β-trifluoromethyl-β-hydroxy carboxylic acid derivatives (Figure 2C).

Optimization of the NHC-catalyzed formal [2 + 2] cycloaddition using the α-aroyloxyaldehyde 4 and trifluoromethylacetophenone (5) as reactants began using the NHC precatalyst 3, triethylamine as the base, and THF as the solvent (Table 1, entry 1). A moderate conversion (48%, as determined by NMR analysis) to the desired β-lactone product 6 as a 70:30 mixture of diastereoisomers was observed, which served as a basis for further optimization. Variation of the base showed caesium carbonate to be significantly more effective than the organic bases examined, giving 88% conversion to product 6 (Table 1, entries 2 and 3). Trialling a number of alternative solvents, including dichloromethane, diethyl ether, and toluene showed no improvement upon the yield obtained with THF (Table 1, entries 4–6). Unfortunately, attempts to isolate the desired β-lactone product 6 were unsuccessful, with 6 being unstable to chromatographic purification under a variety of different conditions. As such, following the NHC-catalyzed formal [2 + 2] cycloaddition in THF, a subsequent ring opening step with allylamine was investigated. Although the diastereomeric ratio of the resultant crude reaction mixture was 75:25 after chromatographic purification, as seen by NMR analysis, the corresponding β-trifluoromethyl-β-hydroxyamide 7 was isolated as a single diastereoisomer in 57% yield and >99:1 er (Table 1, entry 7).

aThe data contained in this Table has previously been published as part of our previous communication in this area [55]. bDetermined by 1H NMR spectroscopic analysis of the crude reaction product mixture. cer of the major diastereoisomer (>95:5 dr), determined by GC analysis using a chiral support. dCombined yield of both diastereoisomers of 6, determined by the analysis of the crude 1H NMR spectra with reference to 2,5-dimethylfuran as an internal standard. eIsolated yield of product 7 (>95:5 dr).

Having optimized this process with a model system, further work probed the scope and limitations of this process through a sequential variation of the nucleophile used for the ring opening procedure, aryl and heteroaryl substitution of the trifluoromethylacetophenone, as well as variation of the α-aroyloxyaldehyde. Using α-aroyloxyaldehyde 4 and trifluoromethylacetophenone (5) as reactants, the variation of the nucleophile showed that a range of amine-based nucleophiles was readily tolerated in this process (Scheme 1). The use of benzylamine, pyrrolidine, and ammonia all gave the corresponding β-trifluoromethyl-β-hydroxyamide product in ≈75:25 dr, with purification giving 8–10, respectively, as a single diastereoisomer in 42–55% yield and excellent enantioselectivity. Using methanol as a nucleophile gave the corresponding ester, however, this product proved unstable to purification. Generation of the ester in situ, followed by subsequent reduction with LiAlH4, gave the diol 11 in 48% isolated yield as a single diastereoisomer in 96:4 er.

Subsequent variation of the electronic nature of the aromatic substituent within the trifluoroacetophenone component, followed by a ring opening with allylamine, showed that the introduction of electron-withdrawing groups (positive Hammett sigma constants) [56], such as p-bromo, p-fluoro, and p-trifluoromethyl groups, respectively, were well tolerated, giving a consistent diastereoselectivity of ≈75:25 dr (Scheme 2). Following chromatographic purification, the desired products 12–14, respectively, were isolated in 59–71% yield as single diastereoisomers with excellent enantioselectivity (95:5 to >99:1 er). The relative and absolute configuration of (2S,3S)-β-trifluoromethyl-β-hydroxyamide 12 was confirmed by single crystal X-ray crystallographic analysis, with all other products in this series assigned by analogy to 12 [57]. The introduction of an electron-donating p-tolyl substituent was also tolerated in the system, providing the corresponding β-trifluoromethyl-β-hydroxyamide 15 in a moderate yield of 46%, although the er of 15 could not be determined by either GC or HPLC analysis. The trifluoroacetophenone derivatives with stronger electron-donating p-methoxy and p-dimethylamino substituents proved unreactive, consistent with the expected lower electrophilicity. A heterocyclic substituent could also be incorporated using this methodology, with thiophene-substituted β-trifluoromethyl-β-hydroxyamide 16 being produced in 80:20 dr, with purification giving 16 in 51% yield as a single diastereoisomer and 96:4 er. The substrate scope was further investigated by variation of the α-aroyloxyaldehyde component of the reaction. Functionalized α-aroyloxyaldehydes containing a C2-benzyl and a C2-benzyloxy derivative were tested, producing the corresponding β-trifluoromethyl-β-hydroxyamides 17 and 18, respectively, in ≈70:30 dr after a ring opening with allylamine. Purification gave 17 and 18, respectively, in a moderate yield as single diastereoisomers and with a good enantioselectivity.

The mechanism of this NHC redox process is believed to proceed through the following mechanism (Scheme 3): After deprotonation of the triazolium salt precatalyst 3 [58], reversible addition of the free NHC I to the aldehyde leads to adduct II [59]. A subsequent deprotonation allows access to Breslow intermediate III, which can eliminate para-nitrobenzoate to leave azolium enol IV. Deprotonation gives azolium enolate intermediate V, which undergoes a formal [2 + 2] cycloaddition with the trifluoroacetophenone derivative to give VI [60]. Elimination of the NHC catalyst completes the catalytic cycle and provides the corresponding β-lactone product. Subsequent ring opening with a suitable nucleophilic amine leads to the isolable β-trifluoromethyl-β-hydroxyamide (Scheme 3).

In this paper, we showed that azolium enolates generated from α-aroyloxyaldehydes can undergo NHC-catalyzed formal [2 + 2] cycloadditions with trifluoroacetophenone derivatives. Although the β-lactone products proved unstable to chromatographic purification, ring opening with amine nucleophiles allowed access to β-trifluoromethyl-β-hydroxyamides in moderate to good yield as single diastereoisomers in excellent er following purification [61].

© 2020 Davies et al.; licensee Beilstein-Institut.
This is an Open Access article under the terms of the Creative Commons Attribution License (http://creativecommons.org/licenses/by/4.0). Please note that the reuse, redistribution and reproduction in particular requires that the authors and source are credited.
The license is subject to the Beilstein Journal of Organic Chemistry terms and conditions: (https://www.beilstein-journals.org/bjoc) 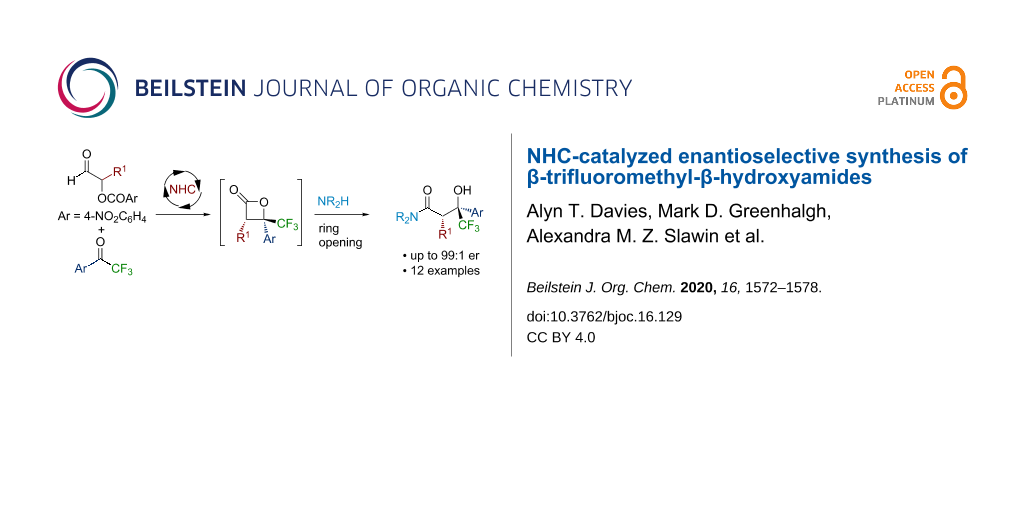