All articles from this author
Radha Krishnan Shobana


All articles from this author
J. Helen Ratna Monica


All articles from this author
Ayyanoth Karthik Krishna Kumar

The presence of versatile functional groups in close proximity classifies Morita–Baylis–Hillman adducts as privileged key scaffolds for synthetic organic chemists. Accordingly, MBH adducts have been explored as strategic intermediates for the synthesis of interesting molecules, such as carbamates of unsaturated β-amino acids [1], β-phenylsylfenyl-α-cyanohydrocinnamaldhydes [2], 2-alkylcarbonyl-1-indanols [3], dihydropyrazoles [4], tetrahydroacridines [5], γ-lactams [6], quinolin-5-ones [7], spirobisglutarimides [8], indolizines [9], and spiro carbocyclic frameworks [10]. However, most of the reported synthetic transformations utilize either allylic hydroxy-protected or allyl halide-substituted MBH adducts [11-23].

Among the known synthetic transformations using functionalized MBH adducts, cycloaddition reactions are challenging and attractive for synthetic organic chemists. In this context, acetate-functionalized Morita–Baylis–Hillman adducts have been extensively utilized over other precursors. For example, heterocycles such as, pyrroles (e.g., IV) [24], keto pyrroles (e.g., V) [25], pyridines (e.g., VI) [26], pyrrolotriazoles (e.g., VII) [27], and triazolobenzoxazonines (e.g., VIII) [28] result from MBH acetates (Scheme 1). From these synthetic elaborations, three successive steps are universally utilized: (i) acetylation, (ii) azidation, and (iii) cycloaddition to produce IV–VIII. In spite of the broad scope and synthetic utility, it is evident that the multistep synthetic methodology is the only existing module for cycloaddition reactions.

Our research group is focused on developing one-pot synthetic transformations for complex molecules [29-31]. Two individual research groups have reported the multistep pathway to access the cinnamyl-1H-1,2,3-triazole derivatives IX from acetates of MBH adducts (Scheme 2) [32,33]. The other preferable moiety for triazole transformations is the allyl halide of MBH adducts, however, the vicinity of its (E)- and (Z)-isomers restricts their use as a favourable starting moiety [34]. After a careful bibliographic investigation, it became evident that there were no one-pot protocols for direct transformations of MBH adducts to cinnamyl triazoles. The outcome of developing a one-pot synthetic strategy will be worthwhile for pharmacologically important triazoles, such as isavuconazole, tazobactam, and ravuconazole [35].

The one-pot model reaction was investigated using the MBH adduct 1a (1 equiv) and propargyl alcohol (2a, 1.2 equiv) in presence of the AzPS [Ph3P+CBr3]N3− (see Supporting Information File 1 for the substituent patterns of the compounds 1a–o). In this precedent reaction, the adduct 1a and propargyl alcohol (2a) in THF were treated with the AzPS (1 equiv) and CuI (3 mol %) at room temperature. To our expectations, the reaction afforded the (E)-cinnamyl-1H-1,2,3-triazole in a low yield of 24% (Table 1, entry 1). Thereby, we anticipated that an increase in the proportion of the AzPS would substantially increase the yield of 3a (Table 1, entries 2 and 3), but unexpectedly, the reaction demonstrated an unsatisfactory yield. Thereafter, on attempting the reaction with an improved ratio of CuI (5 mol %) and AzPS (2 equiv), the expected product 3a was obtained in a moderate yield (71%, Table 1, entry 4). However, a further increase in the AzPS ascertained a gradual decrease in the yield of 3a (Table 1, entries 5 and 6). The outcome of this analysis might have been due to the formation of large amounts of the byproduct triphenylphosphine oxide, which impeded the purification process and decreased the yield of 3a. Alternative Cu(I) catalysts, CuCl and CuBr, were also used at 5 mol % with the AzPS (2 equiv), however, the combination showed no potential increase in the yield of 3a (Table 1, entries 7 and 8). Comprehensive investigations on the proposed methodology revealed 2 equiv of the AzPS and 5 mol % of CuI as the optimized catalytic combination. Further, the optimized reaction was screened in presence of various solvents (Table 1, entries 9–13), and the outcome revealed acetonitrile as the most preferable solvent, yielding 3a in 83% yield (Table 1, entry 11). Interestingly, the dilution of the reaction mixture did not alter the efficiency of this reaction.

The mechanistic pathway for the triazolation proceeded via a nucleophilic attack on the AzPS by the allylic alcohol of the MBH adduct Ia. Subsequently, the azide ion undergoes a nucleophilic attack on the allylic carbon atom of the oxyphosphonium intermediate IIa and generates the 2-azidoalkene IIIa. Interestingly, the consecutive nucleophilic attack by the azido ion smoothly initiates the allylic rearrangement and thereby facilitates the removal of the crucial phosphonium oxide. The outcome of this process is the structurally relevant azido moiety IIIa, which then undergoes a 1,3-dipolar cycloaddition with the copper acetylide IVa to furnish the 1,4-disubstituted 1,2,3-triazoles Va (Figure 1).

At this stage, we sought to analyse the outcome of the proposed reaction following a sequential addition of the reagents utilised for the synthesis of AzPS. Therefore, a preliminary investigation was attempted using the MBH adduct 1a (1 equiv) and propargyl alcohol (2a,1.2 equiv) in the presence of CuI (5 mol %), triphenylphosphine (1 equiv), bromomethane (1.1 equiv), and sodium azide (2 equiv). Unexpectedly, the reaction yielded (Z)-methyl-2-(bromomethyl)-3-phenylacrylate (58%) over the expected triazole. Similarly, the MBH adduct derived from furan, 1i, and phenylacetylene (2b) also yielded (Z)-methyl 2-(bromomethyl)-3-(furan-2-yl)acrylate (42%) rather than the expected triazole (Scheme 4). Thereby, it was clearly evident that the addition of the individual reagents prevented the formation of complicated triazoles.

Interestingly, the MBH adducts derived from salicylaldehydes were inert to triazolations, surprisingly affords bromomethylcoumarin in the presence of AzPS and HBr. The reaction was optimized using salicylaldehyde (1 equiv) in the presence of AzPS (2 equiv) and HBr (2.0 equiv). The reaction afforded 6-(bromomethyl)coumarin (4a) in a yield of 78% (Table 2, entry 3). The synthetic utility of the reaction was further extended to ortho-vanillin and para-bromobenzaldehyde to afford the corresponding halomethylcoumarins (4b/c). However, this regiospecific transformation was restricted only to the MBH adducts derived from salicyladehydes and tert-butyl acrylate [52,53]. Among the reported methodologies on synthesis of halomethylcoumarins [54,55], the present methodology was attractive due to its good yield and the simple reaction conditions.

As shown in Figure 2, the mechanistic pathway for 4a–c progressed via treating the MBH adduct (1m) with AzPS and HBr. The outcome of this process was the phosphonium-protected MBH moiety Ib and hydrazoic acid. The counter ion bromine facilitated the nucleophilic attack at the vinylic centre of Ib and the spontaneous removal of triphenylphosphine oxide to yield IIb. A consecutive intramolecular nucleophilic attack of the hydroxy moiety at the carbonyl carbon of IIIb further drove the cyclisation to afford the bromomethylcoumarin 4a.

In summary, we reported the first protocol on the quaternary phosphonium salt-mediated direct synthesis of cinnamyltriazoles and 3-(bromomethyl)coumarins from Morita–Baylis–Hillman adducts. In contrast to the contending reports on the synthesis of 1,2,3-triazoles and halomethylcoumarins from MBH adducts, our studies report moderate reaction conditions with an improved yield. The above investigation provides a useful synthetic tool for synthetic organic chemists. The synthesis of biologically important triazoles using the reported methodology is underway in our laboratory.

As described in [49]. Typically, triphenylphosphine, bromomethane, and sodium azide at a molar ratio of 1.1:1.1:5 were utilized for synthesising the quaternary phosphonium salt. Initially, triphenylphosphine and sodium azide were stirred at 0 °C in dimethylformamide (5 mL) for 30 minutes. To the mixture, bromomethane in DMF was added slowly to avoid a sudden increase in temperature. The reaction was slowly warmed to room temperature and stirred for another 30 minutes. Finally, the reaction was quenched by the addition of diethyl ether. The filtration of insoluble inorganic salts resulted in a transparent liquid, which, upon concentration by evaporation, provided a crude oily residue. The residue was dissolved in ethyl acetate, washed with brine, and dried over sodium sulphate to yield a clear oily residue of the quaternary phosphonium salt.

A solution of AzPS (2 equiv) in acetonitrile (5 mL) was added to a solution of the Morita–Baylis–Hillman adduct 1a (1 equiv) in acetonitrile (3 mL). The reaction mixture was then stirred for an hour, and 1.2 equiv of propargyl alcohol (2a) and CuI (5 mol %) were added. The reaction mixture was stirred for another 4 hours, followed by TLC analysis. After the completion of the reaction, the solution was concentrated, diluted, and extracted with EtOAc. The combined extracts were washed with brine, filtered through a celite bed, and dried over anhydrous Na2SO4. Thereafter, the solvent was removed, and the isolated crude oily product was purified over silica gel (CHCl3/MeOH) to obtain 3a as a white solid.

To a mixture of the Morita–Baylis–Hillman adduct (1 equiv) and AzPS (2 equiv) in acetonitrile (3 mL), HBr (2 equiv) was added carefully at room temperature. After 2 hours, the reaction mixture was quenched with water (20 mL) and then extracted with ethyl acetate. The organic layer was washed with brine and dried over anhydrous MgSO4. The removal of the solvent in vacuo afforded the crude product, which was purified over silica gel (using hexane/EtOAc) to acquire 4a as colorless crystals.

The authors thank the institute for the necessary infrastructure.

The authors thank the DST-SERB Government of India (file no: YSS/2014/000358) for the financial support.

Morita–Baylis–Hillman reaction of 3-formyl-9H-pyrido[3,4-b]indoles and fluorescence studies of the products

© 2020 Karthikeyan et al.; licensee Beilstein-Institut.
This is an Open Access article under the terms of the Creative Commons Attribution License (http://creativecommons.org/licenses/by/4.0). Please note that the reuse, redistribution and reproduction in particular requires that the authors and source are credited.
The license is subject to the Beilstein Journal of Organic Chemistry terms and conditions: (https://www.beilstein-journals.org/bjoc) 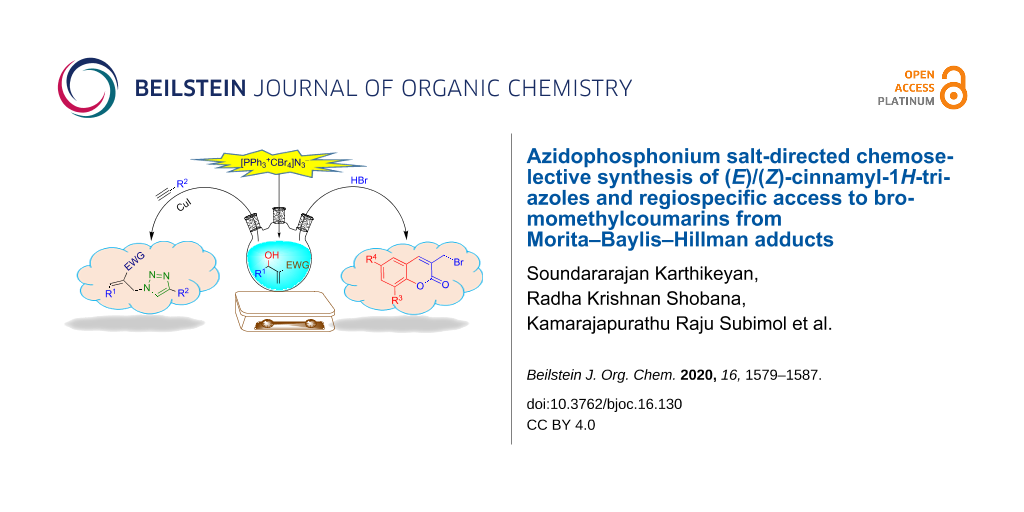