All articles from this author
Constantin G. Daniliuc

Substrate specificity is ubiquitous in biological catalysis, but less pervasive in the realm of small-molecule catalysis. Herein, we disclose an intriguing example of substrate specificity that was observed whilst exploring catalysis-based routes to generate α-fluoroketones from terminal and internal alkynes under the auspices of I(I)/I(III) catalysis. Utilising p-TolI as an inexpensive organocatalyst with Selectfluor® and amine/HF mixtures, the formation of protected α-fluoroketones from simple alkynes was realised. Whilst the transient p-TolIF2 species generated in situ productively engaged with pentynyl benzoate scaffolds to generate the desired α-fluoroketone motif, augmentation or contraction of the linker suppressed catalysis. The prerequisite for this substructure was established by molecular editing and was complemented with a physical organic investigation of possible determinants.

The venerable role of fluorine as a powerful physicochemical modulator in small-molecule drug discovery is a compelling argument for the importance of sustained innovation to facilitate this form of structural editing [1-4]. Routinely employed as a bioisostere of hydrogen or hydroxy [5,6], substitution may enable inversion of the local electronic environment, or the precise deletion of hydrogen-bond donors, respectively, with minimal steric variation [7]. The latter aspect is a crucial determinant in enabling fluorinated materials to adopt intriguing conformations which are a manifest representation of stabilising non-covalent interactions [8-10]. These collective attributes render fluorination a valuable strategy in drug discovery [11] and agrochemical development [12]. In the conception of enabling fluorination technologies, the α-fluorocarbonyl motif has emerged as a prominent target scaffold [13]. Remarkable advances in the direct fluorination (F2/N2) of carbonyl compounds by Sandford and co-workers [14,15] are noteworthy in this regard, and mitigate the expense and poor atom economy associated with stoichiometric approaches. Moreover, this substructure provides a versatile entry point for subsequent C(sp3)–C(sp3) bond-forming reactions [16,17], and closely resembles one of the very few biological blueprints for the preparation of fluorine-containing materials [18-21]. However, in translating the fluoroacetate-like building blocks to a laboratory paradigm, the intrinsic toxicity of these species in inhibiting aconitase [22] must be reconciled with synthetic utility. To that end, catalysis-based strategies to unmask the venerable α-fluorocarbonyl motif [23] from a terminal alkyne were considered (Figure 1). This general strategy was appealing given the commercial availability of the substrates and the plenum of methods available to activate π-bonds [24,25].

Confidence in this approach stemmed from our recent vicinal and geminal difluorination of alkenes [26-30], and contemporaneous studies from the Jacobsen laboratory [31-34], under the auspices of I(I)/I(III) catalysis [35-37]. Moreover, elegant studies by Hara and co-workers have demonstrated that α-fluoroketones could be prepared by exposing silyl enol ethers to stoichiometric p-ToIIF2, in the presence of BF3·OEt2 and NEt3/HF 1:2 [38]. A report by Kitamura and co-workers in which the direct fluorination of acetophenone derivatives was achieved using iodosylarenes and commercially available NEt3/HF 1:5 to generate the ArIF2 species in situ is also highly pertinent [39,40] (Figure 1A).

Elegant reports describing the conversion of internal alkynes to α-fluoroketones via π-acid catalysis were also disclosed (Figure 1B). Seminal reports by Nevado [41,42] and Gouverneur [43] enabled the synthesis of α-fluoroketones and -enones from terminal and internal alkynes, thereby mitigating difluoroketone formation: This is commonly observed in the fluorination of alkynes using stoichiometric electrophilic fluorinating reagents [44,45]. Developments by Hammond and Xu validated N-pyridine oxides as terminal oxidants to substitute Selectfluor® for the cationic Au(I)/Au(III) cycle, thereby enabling high functional group tolerance [46-49]. Inspired by these and other selected advances [50,51], in metal-based fluorination, a complementary organocatalytic variant [52], based on an I(I)/I(III) catalysis platform was explored (Figure 1C). It was envisaged that the in situ generation of p-TolIF2 via oxidation of p-TolI with Selectfluor® in the presence of an amine/HF complex might enable the title transformation [53].

To explore the feasibility of generating α-fluoroketones from terminal alkynes via I(I)/I(III) catalysis, 4-pentynyl benzoate (1) was selected as the substrate for optimisation studies (Table 1). The inexpensive, commercially available p-TolI was used as an organocatalyst, Selectfluor® was employed as the terminal oxidant, and an amine/HF complex enlisted as the fluoride source (please see Supporting Information File 1 for full details). The reaction was performed in CHCl3 at ambient temperature and the crude reaction mixtures were analysed by 19F NMR spectroscopy using ethyl fluoroacetate as the internal standard. Initially, the effect of Brønsted acidity was explored by varying the amine/HF ratio with mixtures of commercially available NEt3/HF 1:3 and Olah’s reagent (pyr/HF 1:9.23). Lower amine/HF ratios (1:4.5) resulted in poor conversion (9% yield, Table 1, entry 1), whereas increasing the Brønsted acidity to 1:7.5 furnished the desired α-fluoroketone 2 in 64% yield (Table 1, entry 2). However, employing Olah’s reagent (1:9.23) had a negative impact on the efficiency (45% yield, Table 1, entry 3) thereby allowing a plateau to be established (vide infra).

Having established that an amine/HF ratio of 1:7.5 provides the optimal Brønsted acidity for catalysis, a solvent screen was conducted to assess the effect of the reaction medium. Chlorinated solvents proved to be most effective, with reactions performed in CHCl3 slightly outperforming those in CH2Cl2 (64% and 56% yield, respectively, Table 1, entries 2 and 4). Fluorinated solvents such as hexafluoroisopropanol (HFIP) or ethyl trifluoroacetate (ETFA) led to similar results (52% and 50% yield, respectively, Table 1, entries 5 and 6). Switching to non-halogenated solvents such as acetonitrile or toluene proved to be detrimental (19% and 10%, respectively, Table 1, entries 7 and 8). A screen of common oxidants for I(I)/I(III) catalysis confirmed Selectfluor® as being ideally suited, in line with our previous observations [26-30]. Whereas m-CPBA generated the desired α-fluoroketone 2 (50% yield), ground Oxone® or N-pyridine oxide proved to be ineffective (Table 1, entries 9–11). Increasing the reaction temperature to 50 °C led to the same outcome as at ambient temperature (64% yield, Table 1, entry 12). Finally, the control reactions in the absence of catalyst, oxidant and HF source were performed and supported the involvement of the postulated I(I)/I(III) cycle (Table 1, entries 13–15).

Since the conditions described in Table 1, entry 2 furnished the desired α-fluoroketone 2 in a respectable yield without the addition of H2O, efforts to establish the influence of rigorous exclusion and excess addition were conducted (Table 2). In both scenarios, comparable results were observed (without H2O 64%, with addition of 1.0 equiv 64% yield, Table 2, entries 1 and 2). Further increasing the amount of H2O from 2.0 equiv to 10 equiv suppressed reactivity (to 29% yield, Table 2, entries 3–5). In addition, a nearly linear correlation between the equivalents of added H2O and the product yield was observed (Table 2 insert). Cognisant that H2O is likely being introduced to the reaction via the HF source, and to prevent reproducibility issues due to variation of the H2O content, 1.0 equiv was added in the general procedure to enable comparison.

With the optimised reaction conditions in hand (Table 2, entry 2), the scope and limitations of the title transformation were explored. Initially, the influence of modifying the aryl fragment of the 4-pentynyl benzoate motif was established (Scheme 1). Exposing the standard substrate 1 to the general reaction conditions furnished the desired product 2 in a synthetically useful isolated yield of 60%. Introduction of para-substituents was tolerated enabling formation of the chloro, methoxy, and nitro derivatives 3–5 with up to 54% yield. The exposure of a model internal alkyne to the standard conditions proved also successful affording 6 in 46% yield. Finally, replacement of the benzoate unit by a phthalimide moiety was possible and led to the protected amine derivative 7 (64% yield).

The structure of α-fluoroketone 2 was unequivocally established by single crystal X-ray diffraction (Figure 2). Interestingly, a study by Pattison has established that α-fluoroketones preferentially adopt a cis-conformation in polar solvents [54]. In the solid state, a dihedral angle of φ = −3.7° was observed thereby placing the C–F bond in the same plane as the carbonyl group.

To establish the limitations of the title transformation, a process of substrate editing was initiated (Figure 3). However, efforts to contract or expand the alkynyl chain to four or six carbons, respectively, had a negative impact on the yield of the α-fluoroketone (16%, <5% for 8 and 9, respectively, Figure 3A). Deletion of the ester carbonyl (10) and replacement of the phenyl group by methyl (11) was also detrimental. From these data it is tempting to speculate upon the involvement of a chair-like transition state in which the intramolecular interaction of the phenyl π-system, carbonyl and alkynyl group are optimally preorganised with a C5 linker. With this in mind, the amide derivatives 12 and 13 were exposed to the standard reaction conditions. Curiously, the reactions were extremely ineffective yielding the respective α-fluoroketones in only 15% yield as determined by 19F NMR spectroscopy. This contrasts sharply with the phthalimide derivative 7 (64%). Doping a representative reaction (14 → 9) with methyl benzoate (15) (Figure 3B) to explore for potential activator effects also proved unsuccessful.

To interrogate the importance of the benzoate group in the substrate, a Hammett analysis was conducted. To that end, log(kR/kH) was plotted against the Hammett σ−p parameter for the para-substituted pentynyl benzoates with R = OMe, H, Cl, and NO2 (Figure 4A). However, the resulting slope of the Hammett plot was essentially zero (ρ ≈ 0). In contrast, a second Hammett analysis in which the substitution of the iodoarene catalyst was explored (R = Me, H, Cl, and Br) revealed a build-up of positive charge (ρ < 0) during the rate-determining step (Figure 4B).

From a methodological perspective, this study provides a conceptual platform to unmask the valuable α-fluoroketone motif from alkynes. Selectfluor®-mediated oxidation of p-TolI in the presence of an amine/HF source, which plays a dual function as fluoride source and Brønsted acid activator, enables in situ generation of p-TolIF2 (Figure 5). From these preliminary mechanistic investigations, conclusions regarding the extreme sensitivity of the fluorohydration towards changes in the substrate must be drawn with caution. The importance of the pentynyl linker, together with the requirement for the benzoyl ester, suggest a highly preorganised structure [55] in which the carbonyl group functions as a tempered Lewis base upon ligand exchange (Figure 5) [56]. This working hypothesis may also rationalise the deletion experiment (10), the recalcitrance of acetyl derivatives, and the striking reactivity disparity between amides (12/13) and the phthalimide derivative 16. Finally, to investigate the fate of water in the transformation, the catalytic process was repeated in the presence of H218O. Through isotope-shift experiments (please see Supporting Information File 1), it was possible to establish that the aryl ketone of the product contains the 18O atom (ΔδC = 4.42 Hz) [57-59]. Formation of the corresponding enol [60], tautomerisation and displacement liberates the α-fluoroketone and regenerates the ArI catalyst.

In conclusion, the synthesis of α-fluoroketones from 4-pentynyl benzoates based on an I(I)/I(III) catalysis manifold is disclosed. Preliminary mechanistic experiments, supported by Hammett analyses, have identified key determinants that are essential for reaction efficiency. X-ray crystal structure analysis of ketone 2 reveals a dihedral angle of φO=C-C-F = −3.7°. Although the origin of this specificity requires clarification, this fluorohydration reaction constitutes a rare case of substrate specificity in small-molecule catalysis. It is envisaged that this organocatalytic variant of the venerable Kucherov reaction will find application in contemporary organofluorine chemistry [61] and contributes to the current interest in alkyne functionalisation via I(I)/I(III) catalysis [62,63].

We thank the analytical department of our institute for excellent support.

We acknowledge generous financial support from the WWU Münster and the Deutsche Forschungsgemeinschaft (SFB 858, fellowship to J.N.).

© 2020 Neufeld et al.; licensee Beilstein-Institut.
This is an Open Access article under the terms of the Creative Commons Attribution License (http://creativecommons.org/licenses/by/4.0). Please note that the reuse, redistribution and reproduction in particular requires that the authors and source are credited.
The license is subject to the Beilstein Journal of Organic Chemistry terms and conditions: (https://www.beilstein-journals.org/bjoc) 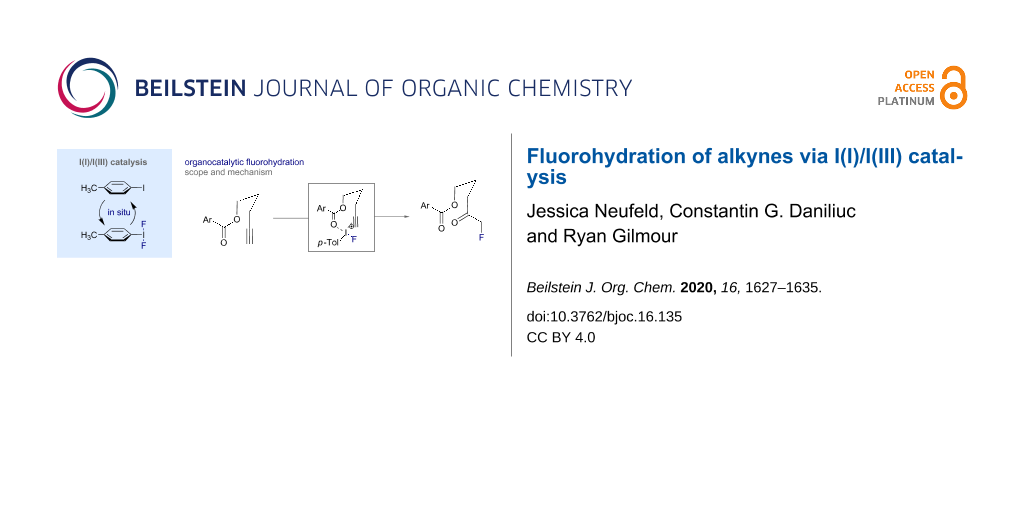