Streptococcus pneumoniae (SP) bacteria cause serious invasive diseases. SP bacteria are covered by a capsular polysaccharide (CPS) that is a virulence factor and the basis for SP polysaccharide and glycoconjugate vaccines. The serotype 9V is part of the currently marketed conjugate vaccine and contains an acetate modification. To better understand the importance of glycan modifications in general and acetylation in particular, defined oligosaccharide antigens are needed for serological and immunological studies. Here, we demonstrate a convergent [2 + 3] synthetic strategy to prepare the pentasaccharide repeating unit of 9V with and without an acetate group at the C-6 position of mannosamine.

Streptococcus pneumoniae (SP), a Gram-positive bacterium colonizes the nasopharynx [1] and causes invasive diseases such as meningitis, otitis media, and pneumonia [2]. Invasive pneumococcal diseases cause high mortality and morbidity in children, the elderly and in immunocompromised individuals particularly in developing countries [3]. With increasing antimicrobial resistance to antibiotics, vaccines are becoming even more important to control these pathogens. Despite the availability of multivalent polysaccharide and glycoconjugate vaccines such as Pneumovax, Prevnar® 13, and Synflorix, pneumonococcal diseases are still of growing concern due to an increase in non-vaccine serotypes and the cost of implementing these expensive vaccines in national immunization programs [4-6].

CPS is an important bacterial virulence factor and is critical for the interaction with the host as it helps the bacteria to escape the host immune response [1,7]. These polysaccharides of SP consist of repeating units (RU) that range from di- to heptasaccharides that may be branched and/or charged [8]. Modifications such as O-acetylation, phosphorylation, and sulfation further increase CPS complexity. Many bacterial polysaccharides are O-acetylated [9,10]. Especially SP serotypes, such as 9 (A, V) and 18C differ in O-acetylation. Two O-acetylated serotypes (9V and 18C) are part of the commercial vaccine Prevnar® 13. The traditional CPS isolation approach produces varying length CPS with different degrees of acetylation. An acetate loss during isolation, purification, or protein conjugation leads to structurally altered CPS. Vaccines based on synthetic carbohydrate antigens [11-15] such as the first commercially available semisynthetic glycoconjugate vaccine Quimi Hib® against H. influenzae [16] and Shigella flexneri pentadecasaccharide that passed phase-I clinical trials [17,18] incorporate defined oligosaccharides.

SP 9 contains four capsular types (9A, 9L, 9N and 9V) whereby the most prevalent, 9V (57%) affects young children and 9N (34%) infects adults [19]. CPS of 9V and 9A serotypes differ only in the degree of acetylation of the same pentasaccharide RU. The positions and degree of RU acetylation has been revised several times since the initial structure 1 was proposed in 1981 (2 and 3 in Figure 1) [20-22].

Antibodies raised against the natural 9V polysaccharide recognize the natural and the de-O-acetylated form of 9V, but only the antiserum that recognizes O-deacetylated 9V CPS showed opsonophagocytic activity suggesting that O-acetylation was not essential for a protective antibody response [23]. Another study revealed that rabbit 9V antiserum showed decreasing binding to O-deacetylated 9V PS compared to the acetylated version whereas mAb against the 9V polysaccharide bound O-acetylated and de-acetylated 9V PS about the same and showed opsonophagocytic activity, and passively protected young mice against SP9V challenge [24]. With the role of acetylation still not understood, synthetic SP9V oligosaccharide antigens are key to study the role of O-acetylation in protection and to confirm the structure of the natural RU. To date, only partial syntheses of the SP9A/V backbone have been reported but none have addressed the acetylation issue [25-27]. Oscarson et al. reported the synthesis of the natural pentasaccharide repeating unit as the methyl ester with no acetylation. Since our previous studies involving ST3 [12] and ST8 [13] indicated glucuronic acid to be an important epitope for immunogenicity, we embarked on the syntheses of 9A/9V but using a frameshift sequence of the natural pentasaccharide RU with glucuronic acid at the non-reducing end.

The SP 9V linear pentasaccharide RU 1 contains ᴅ-glucuronic acid (ᴅ-GlcpA), ᴅ-galactose (ᴅ-Galp), 2-acetamido-2-deoxy-ᴅ-mannose (ᴅ-ManpNAc), and ᴅ-glucose (ᴅ-Glcp) units. Several cis glycosidic linkages, including a β-mannosidic linkage, have to be installed stereoselectively while taking provision to install the C-6 O-acetate in ManpNAc. The synthetic approach (Scheme 1) relies on a late stage [2 + 3] α-glycosylation between disaccharide 6 and trisaccharide 7 to obtain the fully protected pentasaccharide RU. The di- and trisaccharide will be prepared from five differentially protected building blocks (8–12) that will ensure the desired stereochemical outcome during the glycosylations.

The synthesis of trisaccharide 25 commenced with the union of glucose thioglycoside 12 with C5-linker alcohol 13 to yield the corresponding reducing-end monosaccharide 14 equipped with the linker in 70% yield as a mixture of anomers (α:β = 2:1) (Scheme 2). The reductive opening of the benzylidene protecting group in 14 enabled the separation of anomers and furnished acceptor 15α [28], that was reacted with thioglucoside 11 to yield exclusively the β-disaccharide 16 (Scheme 2). A ring-opening reaction followed by subsequent glycosylation of 19 with orthogonally protected thioglucoside 10 gave trisaccharide 21 in moderate yield. To improve the yield, the nucleophilicity of the disaccharide acceptor 19 (Scheme 2) was altered by replacing the benzoate esters in 16 by a benzyl ether leading to compound 17. The latter then was converted into the more reactive acceptor 20 via a ring-opening reaction. Glycosylation of 20 with thioglucoside 10 resulted in the desired trisaccharide 22 in almost twice the yield when compared to trisaccharide 21 derived from acceptor 19. To circumvent the challenging β-mannosylation, the mannosamine unit was installed via the C-2 inversion of glucose at the trisaccharide stage. For that purpose, the C-2 levulinate ester in compound 22 was removed and the resulting secondary alcohol 23 was converted to the azide via a two-step process of triflation and azide substitution to produce the desired trisaccharide 24 [29]. Removal of the allyl group using iridium-catalyzed isomerization and subsequent treatment with iodine in the presence of water yielded trisaccharide acceptor 25 for the late stage [2 + 3] glycosylation.

The synthesis of disaccharide donor 29 started with the glycosylation of glucuronic acid building block 8 with galactose acceptor 9 to obtain disaccharide 26 in 92% yield with 3:1 (α:β) selectivity (Scheme 3). To improve the selectivity for the late stage [2 + 3] glycosylation, disaccharide 26 was modified into compound 6 via benzylidene ring opening followed by benzoylation of the free C-4 secondary hydroxy group in 27. The disaccharide imidate 29 was synthesized from 6 by anomeric desilylation to afford 28 that was converted to the corresponding imidate in an excellent yield.

Pentasaccharide 5, containing a C-6 O-acetate on mannosamine was obtained from 33, that in turn was a product of the benzylation of 32. Cleavage of the benzylidene group in 33 yielded 34 that was selectively acetylated at the primary alcohol at low temperature to obtain 35 [30]. The subsequent removal of the benzyl groups using hydrogenation with Pd/C in an EtOH/THF mixture at room temperature for 48 h afforded the desired O-acetylated pentasaccharide 5. The stereochemistry of each anomeric center during the respective glycosylation was confirmed using the 1H coupling constant and using coupled HSQC for the JC1,H1 coupling (see Supporting Information File 1). The final frame shift 9A and 9V pentasaccharides were compared to the natural reported repeating unit of the CPS. The C6 acetylation of ManNAc was confirmed by comparison of the NMR spectra between the acetylated (9V, compound 5) and deacetylated (9A compound 4) synthetic single RU. This data was further confirmed by the work of Moon Nahm et. al that showed the NMR of natural 9V matching with respect to ManNAc C6 acetylation (the observed chemical shift for the methylene H6 were 4.47 and 4.28 ppm, respectively, and for methyl at 2.17 ppm). The 1H NMR and HSQC spectra of 5 show the presence of methylene H6 peaks at 4.49 and 4.31 ppm, which in the case of 4, are present between 3.86–3.94 ppm. Also the new acetyl peak of 5 is seen at 2.18 ppm (Supporting Information File 1).

Two SP serotype 9V pentasaccharide antigens with and without an acetate group at the C-6 position of ManpNAc were synthesized using a convergent [2 + 3] glycosylation strategy. The antigens we prepared will be employed in serological studies using glycan arrays and immunological studies in vivo to probe the significance of the acetate group for immunogenicity and antigenicity.

© 2020 Parameswarappa et al.; licensee Beilstein-Institut.
This is an Open Access article under the terms of the Creative Commons Attribution License (http://creativecommons.org/licenses/by/4.0). Please note that the reuse, redistribution and reproduction in particular requires that the authors and source are credited.
The license is subject to the Beilstein Journal of Organic Chemistry terms and conditions: (https://www.beilstein-journals.org/bjoc) 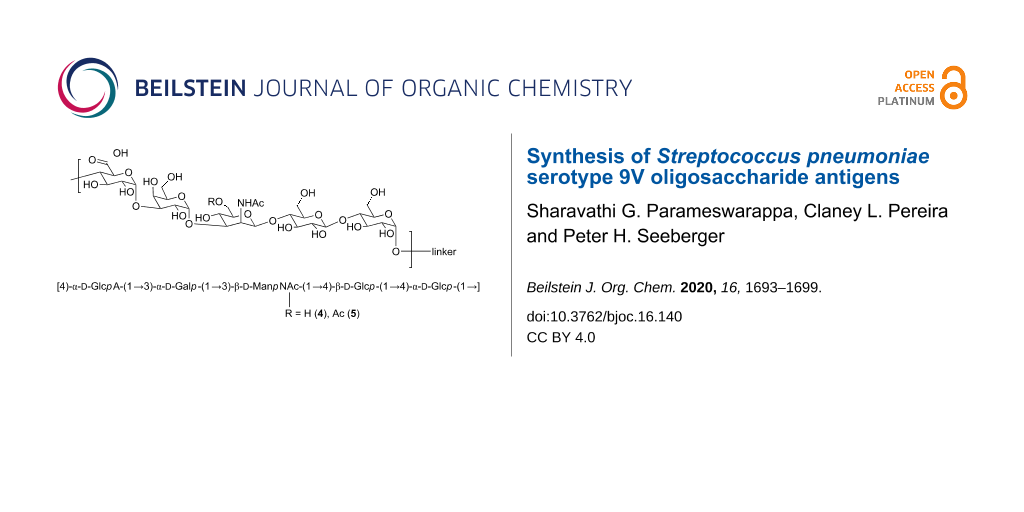