All articles from this author
Jianyan Wu


All articles from this author
Shigeyuki Yamada

[2 + 3] cycloaddition reactions of fluorinated alkynes with 2-formylphenylboronic acids under the influence of Co(acac)2·2H2O in two-component solvents of acetonitrile/2-propanol at reflux temperature for 18 h took place smoothly, affording the corresponding fluoroalkylated indenol derivatives in good yields. This reaction shows excellent regioselectivity, giving 2-fluoroalkylated indenols, together with a very small amount of 3-fluoroalkylated indanones as side products.

2,3-Disubstituted indenol derivatives are important compounds possessing high potential due to the insecticidal, myorelaxation, and antiproliferative properties (Figure 1) [1-12]. Thus, enormous attention has been paid to 2- or 3-fluoroalkylated indenol derivatives in the field of medicinal and agrochemical drug design since a fluorine atom can very often bring about an increasing effect on the pharmacological activity owing to the unique nature of the fluorine atom(s) [13-18]. However, reports on a synthetic protocol for 2- or 3-fluoroalkylated indenols are very limited [19-22]. Recently, Yamazaki et al. have reported the reaction of the CF3-containing phthalide B prepared from the 1,2-diester A with the Ruppert–Prakash reagent (TMSCF3) in the presence of a catalytic amount of CsF (Scheme 1a). According to this paper, phthalide B reacted smoothly with phenylthiomethyllithium to give the corresponding CF3-containing indanone C. Then, dehydration of C using p-TsOH⋅H2O, followed by a 1,2-reduction led to 3-fluoroalkylated indenol D. All of these reactions produced the desired products in good yield, however, this protocol is limited to the introduction of a trifluoromethyl group at the 3-position of the indenol. To the best of our knowledge, there are no reports on the practical synthesis of disubstituted 2-fluoroalkylated indenols so far.

Transition-metal-catalyzed carbocyclization reactions of alkynes with benzene derivatives having a leaving group X (X = Br, I, OTs, B(OH)2) have been widely considered as one of the most efficient and convenient protocols for the construction of various 2,3-disubstituted indene derivatives, such as indenols and indenamines (Scheme 1b) [23-25]. There have been numerous studies on the reaction with nonfluorinated alkynes under the influence of various transition metals. Despite their effective advantages, on the other hand, the reports on cycloaddition reactions with fluorine-containing alkynes for the construction of fluoroalkylated indene derivatives are rare [21,26].

Initially, we carried out the screening of the reaction conditions for the cobalt-catalyzed [2 + 3] cycloaddition using fluoroalkylated alkyne 1a and 2-formylphenylboronic acid (2A) [28]. The results are summarized in Table 1.

aDetermined by 19F NMR spectroscopy. bCarried out at the reflux temperature. c2-Acetylphenylboronic acid was used.

The cycloaddition of the fluoroalkylated alkyne 1a with 2.0 equiv of 2-formylphenylboronic acid (2A) in the presence of 10 mol % each of Co(acac)2·2H2O and 1,2- bis(diphenylphosphino)ethane (dppe) in CH3CN at 80 °C for 18 h proceeded to afford the corresponding cyclic products 3aA and 4aA in 76% yield as a regioisomeric 66:34 mixture (Table 1, entry 1). Intriguingly, a small amount of the undesired trans-3-fluoroalkylated indanone 5aA was obtained as a side product, whereas the cis-3-fluoroalkylated and cis/trans-2-fluoroalkylated indanones were not observed. As shown in Table 1, entries 2–4, changing the solvent from CH3CN to DCE, iPrOH, or 1,4-dioxane caused an appreciable decrease in the yield. It should be noted that the use of a mixed solvent of CH3CN and iPrOH significantly improved the isomeric ratio of 3aA and 4aA (>99:1), although 48% of the indanone 5aA was also obtained (Table 1, entry 5). The cycloaddition reaction in the presence of CoCl2 instead of Co(acac)2·2H2O produced the desired 3aA and 4aA in 81% yield, with a lower selectivity of 66:34 (Table 1, entry 6), while the other cobalt catalysts, such as Co(OAc)2·4H2O, Co(acac)3, and Co(OH)2 resulted in the sluggish formation of the fluoroalkylated indenols or indanone (Table 1, entries 7–9). When 1,3-bis(diphenylphosphino)propane (dppp) was used as a phosphine ligand, the desired indenol 3aA was obtained in a moderate yield and with high regioselectivity of 98:2, together with a very small amount of the fluoroalkylated indanone 5aA (Table 1, entry 10). On the other hand, 1,4-bis(diphenylphosphino)butane (dppb) was not a suitable ligand for this reaction, leading only to trace amount of the indanone 5aA (Table 1, entry 11). Finally, the desired cyclization product was produced in a good yield at the reflux temperature while maintaining the selectivity (>99:1, Table 1, entry 12). Unfortunately, 2-acetylphenylboronic acid instead of 2-formylphenylboronic acid (2A) showed a lower reactivity and a poor regioselectivity (73:27, Table 1, entry 13) [29].

With the optimized reaction conditions (Table 1, entry 12), we explored the substrate scope for the [2 + 3] cycloaddition of various fluoroalkylated alkynes 1 and 2-formylphenylboronic acids 2. The results are summarized in Scheme 2.

The substrates 1, having an electron-donating substituent on the benzene ring of the fluoroalkylated alkyne, such as t-Bu or MeO, reacted efficiently, leading to the desired fluoroalkylated indenols 3bA and 3cA in 74% and 68% yield, respectively. However, the substrate containing the electron-withdrawing group CO2Et on the benzene ring of 1 showed a lower reactivity in this reaction (see 3dA). The cycloaddition reaction using a fluoroalkylated alkyne having a 4-biphenyl group as R1 took place smoothly, giving the corresponding indenol 3eA in a good yield. Though bulkier groups as R1, such as 1-naphthyl or 3-chlorophenyl, reduced the reactivity (see 3fA and 3gA), an excess loading of the boronic acid improved the yield appreciably. For the difluoromethylated alkyne 1h, the desired indenol 3hA was obtained in 62% yield under optimal conditions. However, the nonafluorobutylated alkyne 1i showed a lower reactivity, giving the corresponding indenol 3iA in 22% yield. Therefore, when the reaction was carried out using 3.0 equiv of the boronic acid 2A and 20 mol % each of Co(acac)2·2H2O and dppp at 110 °C, the desired 2-fluoroalkylated indenol 3iA was obtained in 43% yield.

Subsequently, we investigated the [2 + 3] cycloaddition reaction of the fluoroalkylated alkyne 1a (R1 = 4-ClC6H4) with variously substituted 2-formylphenylboronic acids 2. Electron-deficient formylphenylboronic acids possessing a fluorine or chlorine atom on the benzene ring gave the corresponding indenols 3aB and 3aC in 41% and 32% yield, respectively, which could not be improved even when an excess loading of the reagents, prolonging the reaction time, and a higher reaction temperature were applied. However, the exposure of the fluoroalkylated alkynes 1a to electron-rich substrates, e.g., 2D and 2E, lead to the indenols in approximately 30% yield, and the use of an excessive amount of boronic acid, Co(acac)2·2H2O, or dppp improved the yields of the desired indenols, forming 3aD in 51% and 3aE in 41% yield. Changing the substituent position on the aromatic ring of the phenylboronic acid from the 4- to the 5-position did not affect the result, giving the indenol 3aF in 52% yield. However, a boronic acid with a fluorine atom at the 3-position did not lead to a satisfactory result, with the cyclic product 3aG being formed in only 22% yield.

Substituted indenones and indanones widely exist in nature, and these skeletons are important classes of organic compounds due to diverse biological and pharmacological activities [30-32]. Therefore, we also accomplished the synthesis of 2-fluoroalkylated indenone and indanone by simple reactions (Scheme 3). An allylic oxidation was carried out with 10 equiv of manganese dioxide in dichloromethane as the solvent at 0 °C for 30 minutes, leading to the corresponding 2-fluoroalkylated indenone 6 in 98% yield. Subsequently, a hydrogenolysis with 1 mol % of Pd/C under a hydrogen atmosphere in methanol at room temperature for 15 h produced the desired 2-fluoroalkylated indanone 7 as the trans-isomer in 69% yield [33-35].

The proposed catalytic cycles for the cobalt-catalyzed [2 + 3] cycloaddition process leading to 2-fluoroalkylated indenols and 3-fluoroalkylated indanones are shown in Scheme 5 [28,38]. Thus, the reaction presumably proceeds as follows: (1) transmetalation of the cobalt catalyst with 2-formylphenylboronic acids (2) gives the arylcobalt species Int-1, (2) insertion of the alkyne 1 into the [Co]–Ar bond (see Int-2a) [39], (3) migration insertion into the formyl moiety to afford the corresponding cobalt alkoxide Int-3a, (4) protonation of Int-3a with HX (X = acac, OiPr, or OH), giving rise to the desired 2-fluoroalkylated indenol 3.

The formation of the 3-fluoroalkylated indanones as a side product may be explained based on the previous literature [20,40]. The reaction of Int-1 with the alkynes 1 also gives Int-2b as a regioisomeric intermediate of Int-2a, leading to the 3-fluoroalkylated cobalt alkoxide Int-3b. Subsequently, the proton shift of the cobalt alkoxide Int-3b provides the allylcobalt species Int-4b because the acidity of the proton Ha of Int-3b is the same as, or higher than the hydroxy group of Int-4b due to the electron-withdrawing effect of the fluoroalkyl group. It should be noted that this process is probably accelerated by 2-propanol or H2O, which is explained by the results that the most 3-fluoroalkylated indenol 4aA was converted into the indanone 5aA in the reaction, using 2-propanol as the solvent and a cobalt hydrate as a catalyst, such as Co(acac)2·2H2O and Co(OAc)2·4H2O, respectively (Table 1, entries 3, 5, and 7).

We sincerely thank the Tosoh Finechem Corp. for a generous gift of 2-bromo-3,3,3-trifluoroprop-1-ene.

© 2020 Kumon et al.; licensee Beilstein-Institut.
This is an Open Access article under the terms of the Creative Commons Attribution License (https://creativecommons.org/licenses/by/4.0). Please note that the reuse, redistribution and reproduction in particular requires that the authors and source are credited.
The license is subject to the Beilstein Journal of Organic Chemistry terms and conditions: (https://www.beilstein-journals.org/bjoc) 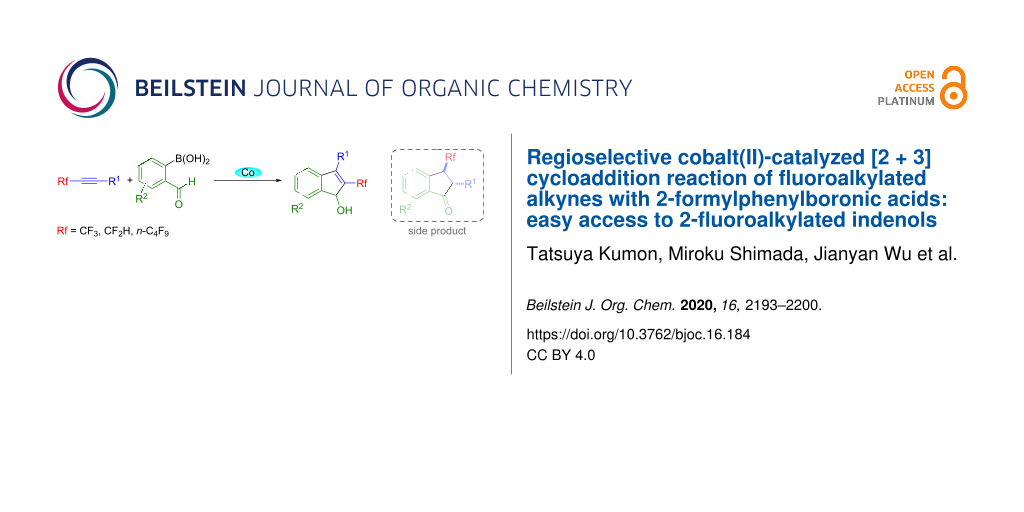