All articles from this author
Ayumi Iijima


All articles from this author
Toshiyasu Inuzuka

New synthetic methods for spirolactams bearing an α-methylene-γ-butyrolactone or its analogous methylene-lactam have been developed. The allylation of γ-phenylthio-functionalized γ-lactams with 2-(acetoxy)methyl acrylamides was accomplished by using 2.5 equivalents of NaH to give the corresponding adducts in excellent yields. The remaining phenylthio group was substituted with a hydroxy group by treatment with CuBr, and the resulting γ-hydroxyamides were cyclized under acidic conditions to afford the corresponding methylene-lactam-fused spirolactams in high yields. On the other hand, methylene-lactone-fused spirolactams could be delivered from the allyl adducts in high yields through a sequential N-Boc protection/desulfinative lactonization.

α-Methylene-γ-butyrolactone is a pharmaceutically important motif which is found in a wide variety of bioactive molecules including natural products (Scheme 1a) [1-3]. For example, sesquiterpene lactones represented by parthenolide and helenalin have attracted interest because of their useful biological activities, and many synthetic efforts have been made so far [4-6]. On the other hand, syntheses and biological evaluation of nonnatural methylene-lactones also have been reported [4,6-8]. For instance, Heindel and his co-worker synthesized methylene-lactone derivatives spiro-fused to an oxindole (A), one of which exhibited a potent cytotoxic activity [9]. Our research group succeeded the enantiopure synthesis of these compounds, in which enantioselective allylation of an isatin derivative with an amido-functionalized allylstannane was employed as a key reaction (Scheme 1b) [10,11]. More recently, an amide-functionalized allyl boronate was developed as an alternative reagent for the allylstannane [12-16], which led to the syntheses of not only cytotoxic methylene-lactones spiro-fused to a lactam ring (B) but also their analogous methylene-lactams (C) through zinc-catalyzed addition to N-carbonyl imides [13,14,16].

Meanwhile, we also developed an umpolung electrophilic allylation of 3-heterosubstituted oxindole D for the synthesis of lactam analog of A (Scheme 1c) [17]. The oxindole D readily reacted with 2-(acetoxy)methyl acrylamides 1 in the presence of a catalytic amount of Pd(PPh3)4 to give the corresponding adducts which could be delivered into an methylene-lactam-fused oxindole. On the basis of this umpolung strategy, spirolactams 4 and 5, which are N-alkyl or N-phenyl-substituted analogs of B and C and unable to be obtained under the conditions depicted in Scheme 1b, seems to be accessible from the common precursor 3 prepared through the reaction between 1 and 3-heterosubstituted isoindolinones 2 followed by cyclization. Considering that 2 is estimated to be less reactive compared with the oxindole derivative D which show excellent nucleophilicity arising from the oxindole–hydroxyindole tautomerization [18,19], this synthetic approach is undoubtedly attractive because it could complement our previous one using nucleophilic amido-functionalized allyl boronates in terms of the structural diversity as well as understanding of the structure–cytotoxicity relationship [14]. Therefore, we were motivated to develop a new synthetic methodology for N-alkyl and N-phenyl derivatives 4 and 5 starting from 2 with 1.

Our studies began with an exploration of a promising substrate for the desired electrophilic allylation. We initially chose N-phenyl-3-(acetoxy)isoindolinone (2a) as a reactant. However, 2a showed no reactivity under the reaction conditions determined for the palladium-catalyzed allylation in our previous work and was recovered in 98% yield [17] (Table 1, entry 1). The use of strong bases such as potassium tert-butoxide or sodium hydride resulted in no formation of the desired product 3a because 2a was decomposed under the harsh reaction conditions (Table 1, entries 2 and 3). Thus we opted to employ another substrate 2b bearing a phenylthio group which polarizes the α-C–H bond to lead the corresponding stabilized anion [20] and is readily transformed into a hydroxy group by treatment with copper bromide according to our previous work [21]. Allylation of 2b with 1a at room temperature proceeded in the presence of a catalytic amount of Pd(PPh3)4 by using potassium tert-butoxide or sodium hydride, affording the corresponding adduct in 50% and 81% yields, respectively (Table 1, entries 6 and 7). Surprisingly, the desired allylation underwent even in the absence of palladium catalyst, probably due to high nucleophilicity of the deprotonated intermediate, to give 3b in 87% yield (Table 1, entry 8). Optimization studies were conducted by screening solvents, reagent amount, and reaction temperature, showing that 3b was produced in the highest yield of 97% when the reaction was carried out with 2.5 equivalents of sodium hydride in THF at −10 °C (Table 1, entries 9–13) [22].

With the optimal reaction conditions for electrophilic allylation of 2b with 1a in hand, we turned to demonstrate the versatility of this method. In our previous work relating to nucleophilic allylation of imide derivatives, we succeeded the syntheses of N-carbonyl-functionalized γ-hydroxy amides bearing an amide side chain [14]. Therefore, we here examined reactions using N-alkyl derivatives in order to gain the structural diversity. Reactions of 3-(phenylthio)isoindolinone derivatives bearing an N-benzyl (2c), N-methyl (2d), and N-(n-pentyl) group (2d) with 1a readily proceeded under the optimized reaction conditions for 3b to afford the corresponding products 3c–e in 90–95% yields (Figure 1). As for the substituents on the methacrylamide side chain, not only aryl groups (p-tolyl and p-anisyl groups) but also an n-pentyl group were tolerated, providing 3f–h in excellent yields. On the other hand, a reaction of a nonaromatic lactam derivative prepared from N-phenyl-2,3-dimethylmaleimide was accompanied by the formation of structure-unidentified side products, resulting in relatively low product yield (3i, 78% yield). This problem was overcome by carrying out the reaction at −20 °C. Under these conditions, 3i–o were predominantly formed in 92–99% yields. Thus, we could obtain a wide variety of 3-phenylthio lactams bearing an amide functionality by electrophilic allylation with 1.

Having completed the installation of an acrylamide side chain into 3-phenylthio lactams, we subsequently proceeded to the construction of the spiro skeleton of 4 and 5. For this purpose, we initially attempted to transform 3b to 5a through the reaction sequence consisting of copper-mediated hydroxylation and acid-mediated lactonization based on our previous reports [10,11,14,21]. Substitution of the phenylthio group of 3b with a hydroxy group was readily achieved by treatment with CuBr in aqueous media (THF/H2O) to afford the corresponding hydroxylactam in 90% yield (Scheme 2). However, the subsequent spirolactonization with p-toluenesulfonic acid (p-TsOH) was unsuccessful, leading to predominant production of bislactam derivative 4a (97%) [23-25]. Although acidic spirolactamization was contrary to our initial expectations, a new type of N-phenyl spirobislactam, which could not be obtained by our previous method, became accessible through this reaction. Therefore, we decided to evaluate its applicability to other substrates. Reactions of isoindolinone derivatives 3c–h under the comparable conditions used for 3b were successful, furnishing the corresponding N-alkyl and N-phenyl bislactams 4b–g in 79–91% two-step yields. Similarly, non-aromatic substrates 3i–o were also converted into 4h–n in 84–94% yields, indicating widespread applicability of this sequential transformation.

Since the cyclization under acidic conditions led to the predominant formation of the methylene-lactam-fused spirolactam, we set another route toward 5 via cyclization of N-Boc-functionalized γ-hydroxymethacrylamide [26]. We initially treated the hydroxylactam prepared through CuBr-mediated hydroxylation of 3b with di-tert-butyl dicarbonate (Boc2O) in the presence of N,N-dimethyl-4-aminopyridine (DMAP), but a mixture of structurally unidentified products was formed. Meanwhile, when the reaction was carried out with 2.0 equivalents of n-butyllithium and 1.1 equivalents of Boc2O in THF at −78 °C, 5a was obtained as a mixture including unreacted starting material (<11% yield), indicating that installation of an N-Boc group on the terminus amide should trigger the desired lactonization. Therefore, we next examined the transposed reaction sequence, N-Boc protection followed by hydroxylation (Scheme 2). N-Boc amides were readily obtained by treatment of 3b–o with Boc2O and DMAP, which were successively subjected to hydroxylation in the presence of CuBr. Expectedly, the desired lactonization occurred spontaneously under the reaction conditions and led to methylene-lactone-fused spirolactams 5a–h in excellent yields without exception (88–98% two-step yields). Thus, we established the bifurcated synthetic routes toward lactams spiro-fused to α-methylene-γ-butyrolactone or α-methylene-γ-butyrolactam by using 3-phenylthiolactams bearing an acrylamide side chain as a common intermediate.

Finally, we subjected methylene-lactone-fused spirolactams to the assay of cytotoxicity on P388 cells (Figure 2). N-Methyl-substituted spirolactam 5c exhibited potent cytotoxicity (IC50 0.32 μg/mL) which was comparable to that of the N-acetyl analog E (0.16 μg/mL) [14]. It should be noted that the IC50 values of our recently reported non-conjugated lactone F [27] was >100 μg/mL. In addition to 5c, we tested the cytotoxicity of methylene-lactam-based compound 4o, which exhibited weak activity (IC50 12.4 μg/mL) against the P388 cell line. These results suggest that cytotoxic activity of this type of spirolactams against P388 cells is simply related to the methylene lactone structure [28].

This work was supported in part by JSPS Kakenhi Grant number 17K05858 from the Ministry of Education, Culture, Sports, Science and Technology, Japan.

© 2020 Sengoku et al.; licensee Beilstein-Institut.
This is an Open Access article under the terms of the Creative Commons Attribution License (https://creativecommons.org/licenses/by/4.0). Please note that the reuse, redistribution and reproduction in particular requires that the authors and source are credited.
The license is subject to the Beilstein Journal of Organic Chemistry terms and conditions: (https://www.beilstein-journals.org/bjoc) 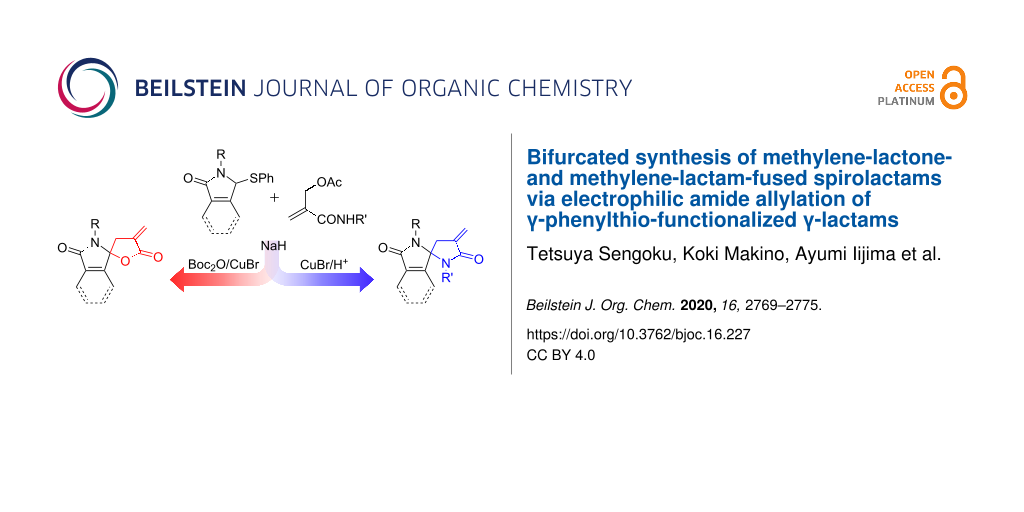