All articles from this author
Masahiko Sakai


All articles from this author
Kazuto Fuji


All articles from this author
Kohei Sekine

We have developed a catalytic synthetic method to prepare phenoxasilins. A borane-catalyzed double sila-Friedel–Crafts reaction between amino group-containing diaryl ethers and dihydrosilanes can be used to prepare a variety of phenoxasilin derivatives in good to excellent yields. The optimized reaction conditions were also applicable for diaryl thioethers to afford their corresponding six-membered silacyclic products. The gram-scale synthesis of a representative bis(dimethylamino)phenoxasilin and the transformation of its amino groups have also been demonstrated.

Six-membered silacyclic compounds, such as phenoxasilin and phenothiasilin derivatives, are attractive compounds for applications as organic electronic materials [1-4], ligands [5-10], and reagents [11-14]. Therefore, the development of new methods to construct silacyclic skeletons is highly desirable. These compounds are commonly synthesized upon the reaction of heteroatom-bridged dilithiated diaryl compounds, such as dilithiated diaryl ethers and dilithiated diaryl thioethers with a range of dichlorosilane derivatives (Scheme 1a) [15-24]. An intramolecular silylation via Si–C bond cleavage can also be used to prepare a variety of six-membered silacyclic derivatives (Scheme 1b) [25]. However, some problems still remain in terms of the functional group tolerance and versatility of these previously reported synthetic methods due to the use of a stoichiometric amount of the organolithium reagents. In addition, despite these contributions, catalytic reaction systems have not been developed as much [26,27].

A double sila-Friedel–Crafts reaction was initially investigated using diaryl ether 1a and dihydrodiphenylsilane (2a) as model substrates (Table 1). Under the optimized reaction conditions used for the synthesis of silafluorenes in our previous report [40] (B(C6F5)3 (5.0 mol %) and 2,6-lutidine (7.5 mol %) in chlorobenzene at 100 °C), the desired reaction between 1a with 2a proceeded to give phenoxasilin 3a in 60% yield (Table 1, entry 1). The structure of phenoxasilin 3a was confirmed using single-crystal X-ray crystallography (see Supporting Information File 1 for details) [42]. Upon increasing the reaction temperature to 140 °C, the yield of 3a was improved to 88% (Table 1, entry 2). Although the reaction in the presence of 3.0 mol % of the catalyst also proceeded efficiently (Table 1, entry 3, conditions A), the yield of 3a decreased when compared to that obtained using 1.5 mol % of the catalyst (Table 1, entry 4). The best result was obtained in the absence of 2,6-lutidine by which phenoxasilin 3a formed in 99% yield (Table 1, entry 5, conditions B).

Next, the scope of the dihydrosilane starting materials used in the reaction was investigated (Scheme 2). The reactions of phenylmethylsilane (2b) and diethyldihydrosilane (2c) afforded their corresponding phenoxasilin derivatives 3b and 3c in 66 and 74% yield, respectively. The yields of 3b and 3c were improved to 83 and 91% in the presence of a catalytic amount of 2,6-lutidine, probably due to the acceleration of the deprotonation step by 2,6-lutidine [33]. In the case of phenylsilane (2d), the phenoxasilin product 3d was formed in 59% yield using conditions B and in 63% yield under conditions A. Di(4-bromophenyl)dihydrosilane (2e) was transformed successfully into phenoxasilin 3e in 83% yield without loss of the bromine substituent. The reaction system was also applicable for 9,9-dihydro-5-silafluorene (2f), which gave the spiro-type phenoxasilin 3f in 96% yield.

We then investigated the scope of the starting biaryl ethers used in the reaction as well as related derivatives thereof using dihydrodiphenylsilane (2a, Scheme 3). Pyrrolidine-substituted diaryl ether 1b was transformed into phenoxasilin 3g in 80% yield. Also, the chloro-substituted diaryl ether gave its corresponding phenoxasilin 3h in 94% yield without affecting the chlorine substituent. The methyl-substituted phenoxasilin derivatives 3i and 3j were formed in good yield despite of the steric hindrance of the methyl group in 3j. When one of the NMe2 groups was replaced with a SMe group, a mixture of the corresponding phenoxasilin product (3k) and the hydrosilane compound (3k′) was obtained via a single sila-Friedel–Crafts reaction in 35% yield in the presence of 2,6-lutidine (3k:3k′ = 63:37). This result was probably due to the weaker electron-donating ability of the SMe group compared to that of NMe2. The double C–H silylation reaction proceeds efficiently upon increasing the temperature to 180 °C that afforded the mixture (3k:3k′ = 92:8) in 68% yield. The reaction system can also be applied to the synthesis of phenothiasilin 3l that was obtained in 93% yield starting from diaryl thioether 1g. N-(Benzyl)methylamine-substituted diaryl thioether 1h was also transformed into phenothiasilin 3m in 58% yield. The corresponding six-membered silacycles were not formed using N-aryl-bridged biaryls as substrates.

To test the applicability of the method, a gram-scale synthesis of phenoxasilin 3a was carried out (Scheme 4). The reaction of diaryl ether 1a (1.00 g) with dihydrodiphenylsilane (2a, 2.16 g) in the presence of a catalytic amount of B(C6F5)3 afforded phenoxasilin 3a in 93% yield (1.59 g).

Finally, the transformation of the amino groups in phenoxasilin 3a into phenyl groups was carried out (Scheme 5). First, the ammonium salt 4 was prepared by treating 3a with MeOTf followed by a palladium-catalyzed cross-coupling reaction with the Grignard reagent (PhMgBr) that afforded the desired diphenylated phenoxasilin 5 in 87% yield [43].

In summary, we have developed a new catalytic synthetic method to prepare six-membered silacyclic compounds, such as phenoxasilin and phenothiasilin derivatives, using a double sila-Friedel–Crafts reaction. The reaction system is applicable to diaryl ethers with halogen substituents or sterical hindrance. A gram-scale synthesis of phenoxasilins and transformation of the amino groups in the phenoxasilin product were also achieved. We hope that the developed protocol will prove to be a useful and efficient method to synthesize six-membered silacyclic compounds.

© 2020 Dong et al.; licensee Beilstein-Institut.
This is an Open Access article under the terms of the Creative Commons Attribution License (http://creativecommons.org/licenses/by/4.0). Please note that the reuse, redistribution and reproduction in particular requires that the authors and source are credited.
The license is subject to the Beilstein Journal of Organic Chemistry terms and conditions: (https://www.beilstein-journals.org/bjoc) 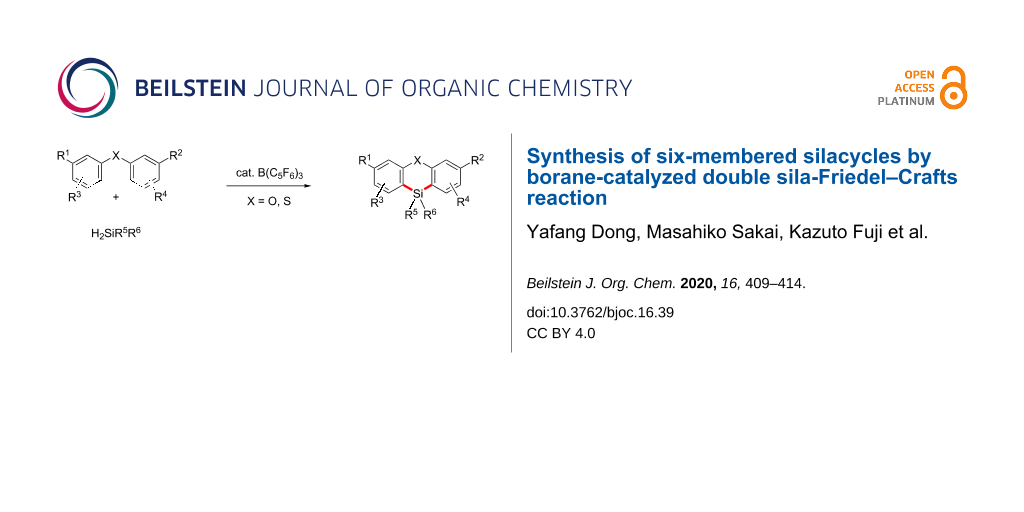