All articles from this author
Sho Mizushima


All articles from this author
Yohei Shimizu

A chiral phenol–NHC ligand enabled the copper-catalyzed enantioselective conjugate reduction of α,β-unsaturated esters. The phenol moiety of the chiral NHC ligand played a critical role in producing the enantiomerically enriched products. The catalyst worked well for various (Z)-isomer substrates. Opposite enantiomers were obtained from (Z)- and (E)-isomers, with a higher enantiomeric excess from the (Z)-isomer.

Since the leading work of Stryker and co-workers on triphenylphosphine-stabilized copper hydride complexes [1,2], copper hydrides have been widely used for conjugate reductions of α,β-unsaturated carbonyl compounds [3]. Especially a chiral copper catalyst combined with a stoichiometric amount of a silane reagent, which generated copper hydride in situ, has successfully been utilized for enantioselective reactions with β,β-disubstituted α,β-unsaturated carbonyl compounds [4-11]. The pioneering work of Buchwald and co-workers on the enantioselective conjugate reduction of α,β-unsaturated esters using a chiral p-tol-BINAP/copper catalyst established the excellent utility of chiral bisphosphine ligands for this type of reaction [4]. Surprisingly, however, chiral ligands based on N-heterocyclic carbenes (NHCs) [12] have not been applied to the conjugate reduction of α,β-unsaturated carbonyl compounds, while an achiral NHC/copper catalyst has successfully been utilized in this reaction [13].

Meanwhile, we devoted our effort to develop novel enantioselective C–C bond formation reactions utilizing chiral phenol–NHC/copper catalyst systems [14-18], in which the phenol group of the NHC ligand plays crucial roles in both the catalytic activity and stereoselectivity [19-21]. Notably, these catalyst systems were also applicable for three-component coupling reactions using hydrosilanes as hydride reagents [17]. Based on this knowledge, we decided to investigate the effects of the phenol–NHC ligand on the copper-catalyzed enantioselective conjugate reduction of α,β-unsaturated esters with hydrosilanes, placing a focus on (Z)-isomer substrates, which generally gave slightly lower enantiomeric excess with the chiral bisphosphines compared to the (E)-isomer substrates.

Further optimization of the conditions was conducted with L4. Changing the silane group affected both the reactivity and selectivity (Table 1, entries 7–10), while the replacement of the ethoxy groups of (EtO)2MeSiH with methoxy or trimethylsilyloxy groups resulted in only moderate reductions in the enantioselectivity and high yields. At the same time, trialkoxysilane (EtO)3SiH and polymeric silane PMHS gave only trace amounts of the product.

The nature of the alcoholic protonation reagent also had a strong impact. The presence of a tertiary alcohol, t-AmOH or t-BuOH, was essential for the reaction to occur with a reasonable yield, while iPrOH and MeOH markedly suppressed the reaction (Table 1, entries 12 and 13). However, the bulkier t-AmOH was superior to t-BuOH in terms of enantioselectivity (Table 1, entries 4 and 11).

Having established optimized conditions for the reaction of 1a (2a, 97% yield, 90% ee (R), Table 2, entry 1), the scope of α,β-unsaturated carbonyl compounds was examined. Because the separation of the product from silicon-based byproducts was troublesome, the isolated yields were lower than the yields determined by NMR spectroscopy (2a, 52%, Table 2, entry 1).

aThe yields were determined by 1H NMR analysis using 1,1,2,2-tetrachloroethane as an internal standard. Isolated yields are shown in parentheses. bt-BuOH was used instead of t-AmOH. c(EtO)2MeSiH (1 equiv) was used.

When (E)-1a was used as the substrate, the opposite enantiomer (S)-2a was obtained in >99% yield, with slightly lower enantioselectivity (Table 2, entry 2, 82% ee (S) vs 90% ee (R) in entry 1). The inversion of the absolute configuration of the product depended on the E/Z geometry of the substrates, and this was analogous to the reported results obtained with the chiral bisphosphine ligand systems, while the observation of a higher enantioselectivity for the (Z)-isomer substrate 1a was characteristic for the phenol–NHC chiral ligand [4,6,8]. The result suggested that the chiral catalyst may mainly discriminate the hydrogen atom and the ethoxycarbonyl group at the α-position rather than the two substituents at the β-position. In good agreement with this assumption is the reaction of substrate 1b, carrying a phenyl group and a p-tolyl group as β-substituents, which seemed to be difficult for the catalyst to differentiate, both sterically and electronically, affording the product 2b in good enantioselectivity (Table 2, entry 3, >99% yield, 75% ee).

Based on the experimental observations and previous knowledge of the catalysis of phenol–NHC chiral ligands [14-18], we propose a catalytic cycle as shown in Scheme 1. LiOt-Bu abstracts the two protons of the acidic imidazolium C–H and phenol O–H groups of the L4·HBF4 adduct in the presence of CuCl to generate a phenoxy copper(I) species A. As a result, all LiOt-Bu (20 mol %) is consumed in this step. Thus, the system is neutral. Transmetalation between A and (EtO)2MeSiH produces the copper hydride species B. This transmetalation adds the silyl group to the phenoxy oxygen atom of the NHC ligand. The coordination of an α,β-unsaturated carbonyl compound 1 to the copper atom occurs in such a way that the bulky O-silyl group of the copper catalyst can avoid steric repulsions with the alkoxycarbonyl group of the substrate 1, forming π-complex C, and thus explaining the marked influence of the hydrosilane structure on the enantioselectivity. During this stereodetermining step, coordination of the phenoxy oxygen atom to the copper atom may render the chiral environment better defined. Then, the π-complex C undergoes 1,4-hydrocupration to afford copper enolate D. During our initial investigations, we observed configurational isomerization from 1a to (E)-1a when the reaction was conducted in the absence of alcoholic protonation reagents. This observation implied that the 1,4-hydrocupration step (C to D) is reversible. Finally, protonation of D by t-AmOH gives the product 2 and silyl ether (EtO)2MeSiOt-Am, regenerating the phenoxy copper(I) complex A. Due to the reversibility of the 1,4-hydrocupration, the choice of the alcoholic protonation reagent affects both the reactivity and enantioselectivity.

The ee value was determined by HPLC analysis with a chiral stationary column CHIRALCEL® OD-H (Daicel Chemical Industries, 4.6 mm, 250 mm, hexane/2-propanol, 98:2, v/v, 0.5 mL/min, 40 °C, 220 nm UV detector, retention time = 9.1 min for the (R)-isomer and 13.3 min for the (S)-isomer). The absolute configuration of 2a was assigned by the comparison of the optical rotation with the same compound prepared by a reported method [4].

© 2020 Mimura et al.; licensee Beilstein-Institut.
This is an Open Access article under the terms of the Creative Commons Attribution License (http://creativecommons.org/licenses/by/4.0). Please note that the reuse, redistribution and reproduction in particular requires that the authors and source are credited.
The license is subject to the Beilstein Journal of Organic Chemistry terms and conditions: (https://www.beilstein-journals.org/bjoc) 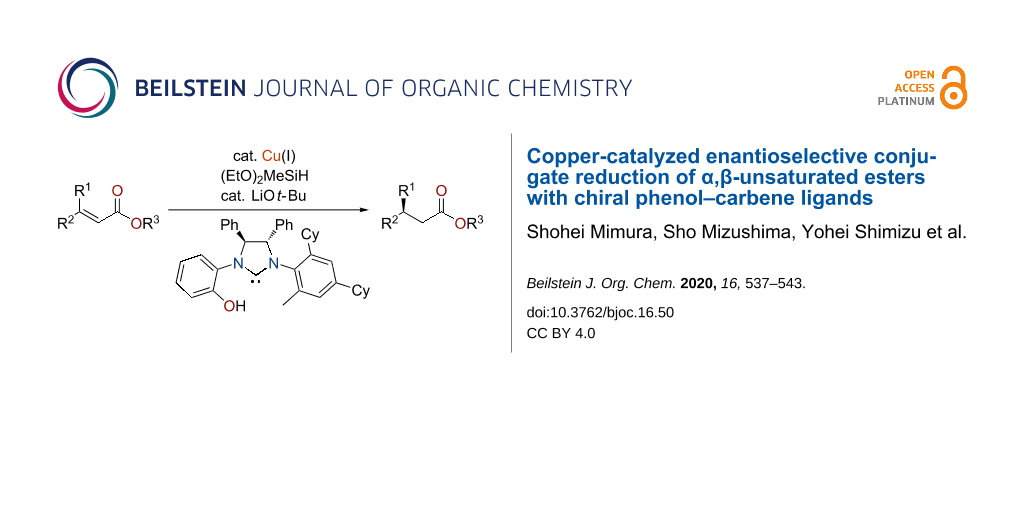