All articles from this author
Fa-Guang Zhang

A diastereo- and enantioselective approach to access chiral CF2-functionalized aziridines from difluorodiazoethyl phenyl sulfone (PhSO2CF2CHN2) and in situ-formed aldimines is described. This multicomponent reaction is enabled by a combined strong Brønsted acid catalytic platform consisting of a chiral disulfonimide and 2-carboxyphenylboronic acid. The optical purity of the obtained CF2-substituted aziridines could be further improved by a practical dissolution–filtration procedure.

Chiral aziridines are prevalently found in natural products and artificially made bioactive molecules, thus receiving significant attention in the past decades [1-6]. Among them, the introduction of fluorine or fluoroalkyl groups into three-membered N-heterocycles has emerged as an attractive direction due to the unique fluorine effect in pharmaceuticals and biology [7-11]. In this context, it is not surprising that the syntheses of trifluoromethylaziridines have been pursued from versatile precursors [12-25]. However, catalytic asymmetric approaches to chiral CF3-functionalized aziridines have only been reported by Cahard in 2012, who utilized trifluorodiazoethane (CF3CHN2) as the nucleophile to react with aldimines catalyzed by chiral phosphoric acid (Scheme 1a) [26]. In comparison, there is a significant dearth of available synthetic approaches to CF2-functionalized aziridines, particularly in a stereocontrolled manner. Indeed, a handful of reported methods document the employment of difluoromethylimines, difluoromethyl phenyl sulfone, and difluoromethyl vinyl sulfonium salts as the fluorinating partner en route to various CF2-substituted aziridines [27-31], and a general protocol to chiral CF2-aziridines remains an unsolved challenge. Thus, herein we report a diastereo- and enantioselective aza-Darzens reaction between in situ-generated aldimines and our recently developed difluorodiazo reagent PhSO2CF2CHN2 acting as the difluorinated nucleophile [32-35], providing access to a variety of chiral CF2-fuctionalized aziridines under mild conditions (Scheme 1b). The key to this multicomponent transformation hinges upon the discovery of a combined strong Brønsted acid system comprised of a chiral disulfonimide and 2-carboxyphenylboronic acid.

We commenced the desired one-pot transformation by conducting the model reaction between phenylglyoxal monohydrate (1a), 4-methoxyaniline (2a), and PhSO2CF2CHN2 (3, Ps-DFA). Initial screenings were focused on the evaluation of various chiral phosphoric acids that have proven effective in similar aza-Darzens reactions of diazo esters and trifluorodiazoethane [36-39]. Unfortunately, these endeavors resulted in either no conversion or no enantioselectivity at all. As arylboronic acids have been harnessed to enhance the Brønsted acidity in asymmetric organocatalysis in combination with chiral diols or chiral aminoalcohols [40-44], we envisioned that the simultaneous use of arylboronic acids and chiral Brønsted acids may bring about a complementary catalytic platform. Encouragingly, the targeted CF2-functionalized aziridine 4a was obtained in up to 51% ee and high diastereoselectivity, albeit in a low yield (Table 1, entries 1 and 2). The difficulty in further improving the conversions might be ascribed to the limited Brønsted acidity of chiral phosphoric acids. Bearing this in mind, we then turned our attention to chiral disulfonimides developed by List, which have been established as a unique type of stronger Brønsted acids [45]. Putting it into practice, a range of BINOL-derived disulfonimides was used as the chiral additive in combination with 2-carboxyphenylboronic acid (COOH-BA) in the model reaction (Table 1, entries 3–8). We were pleased to find that CDSI-4 gave the most promising result in terms of both yield and enantioselectivity (64% isolated yield with 73% ee, Table 1, entry 6). An examination on various arylboronic acids, solvent, temperature, and catalyst loadings resulted in no obvious improvement (Table 1, entries 9–15). Among them, the highest yield of 4a was observed (81%, Table 1, entry 12), albeit with slightly reduced ee value. This enhancement in catalytic activity could be attributed to the increased Brønsted acidity when the strong electron-withdrawing trifluoromethyl group was placed on the benzene ring of the arylboronic acid. Removing the boronic acid from the reaction system leads to a dramatic decrease in both yield and enantiocontrol (Table 1, entry 16).

The challenge to further improve the enantioselectivity promoted us to search for other practical solutions. Considering the poor solubility of 4a in organic solvents, a dissolution–filtration process with isopropanol was found to be workable for increasing the final ee value. This simple procedure could afford 4a with excellent enantiopurity as a single diastereoisomer (>99% ee, >50:1 dr, Scheme 2). By the aid of the developed one-pot aza-Darzens reaction and dissolution–filtration operation, a series of optically-pure CF2-aziridines 4b–h were furnished in moderate overall yields with uniformly excellent ee and dr values, including alkyl or halogen-substituted phenyl and 2-naphthyl ketones (Scheme 2). Unfortunately, phenylglyoxal monohydrates bearing strong electron-withdrawing groups were not compatible with the current conditions. X-ray analysis of aziridine 4a confirmed the absolute configuration of the chiral centers, pointing at a cis-aziridination process [46].

Scaled-up experiments with model substrate 1a also proved to be feasible, delivering the chiral CF2-aziridine 4a with comparable results (Scheme 3a). The 4-methoxyphenyl group of 4a was cleaved smoothly with ceric ammonium nitrate, giving the free aziridine 5a in 81% yield while maintaining the ee value. The reduction of the carbonyl moiety with either NaBH4 or LiAlH4 produced hydroxy-substituted CF2-functionalized aziridine 5b in excellent yield with exclusive diastereoselectivity [47]. Furthermore, the ring-opening of 4a under acidic conditions underwent well and gave rise to CF2-functionalized α-chloro-β-amino ketone 5c in 89% yield with >99% ee and >50:1 dr (confirmed by X-ray spectroscopy) [46].

In summary, an array of chiral CF2-functionalized aziridines was constructed from in situ-formed aldimines and difluorodiazoetyl phenyl sulfone under mild conditions by a combined strong Brønsted acid system consisting of chiral disulfonimide and 2-carboxyphenylboronic acid. The optical purity of the obtained CF2-substituted aziridines could be further improved by a practical dissolution–filtration procedure. Substrate expansion and mechanistic investigation are underway and will be reported in due course.

General procedure for the preparation of chiral CF2-functionalized aziridines 4: To a 25 mL Schlenk tube equipped with a stirring bar were added 2,2-dihydroxy-1-arylethan-1-one (1, 0.3 mmol, 1 equiv), 4-methoxyaniline (2a, 40.6 mg, 0.33 mmol), 2-boronobenzoic acid (COOH-BA, 3.98 mg, 0.024 mmol), anhydrous Na2SO4 (200 mg) and toluene (1 mL) at room temperature under an argon atmosphere. After reacting for 30 minutes at room temperature, ((2-diazo-1,1-difluoroethyl)sulfonyl)benzene (Ps-DFA 3, 104.5 mg, 77.4 uL, 0.45 mmol) was added with a micro syringe and CDSI-4 (12.3 mg, 0.015 mmol) in toluene (1 mL) was added dropwise. The reaction was allowed to stir for 24 hours at room temperature under an argon atmosphere until the consumption of substrates was completed (as monitored by TLC). The reaction mixture was quenched with saturated aq NaHCO3 and extracted with ethyl acetate three times. The combined organic layer was washed with water and brine, and then dried over anhydrous Na2SO4, filtered and evaporated under vacuum. The residue was purified by neutral alumina column chromatography (eluting with dichloromethane/petroleum ether) to give CF2-substituted aziridine 4. The enantiomeric excess was determined by chiral HPLC analysis. See Supporting Information File 1 for the dissolution–filtration procedure for each compound.

© 2020 Tan et al.; licensee Beilstein-Institut.
This is an Open Access article under the terms of the Creative Commons Attribution License (http://creativecommons.org/licenses/by/4.0). Please note that the reuse, redistribution and reproduction in particular requires that the authors and source are credited.
The license is subject to the Beilstein Journal of Organic Chemistry terms and conditions: (https://www.beilstein-journals.org/bjoc) 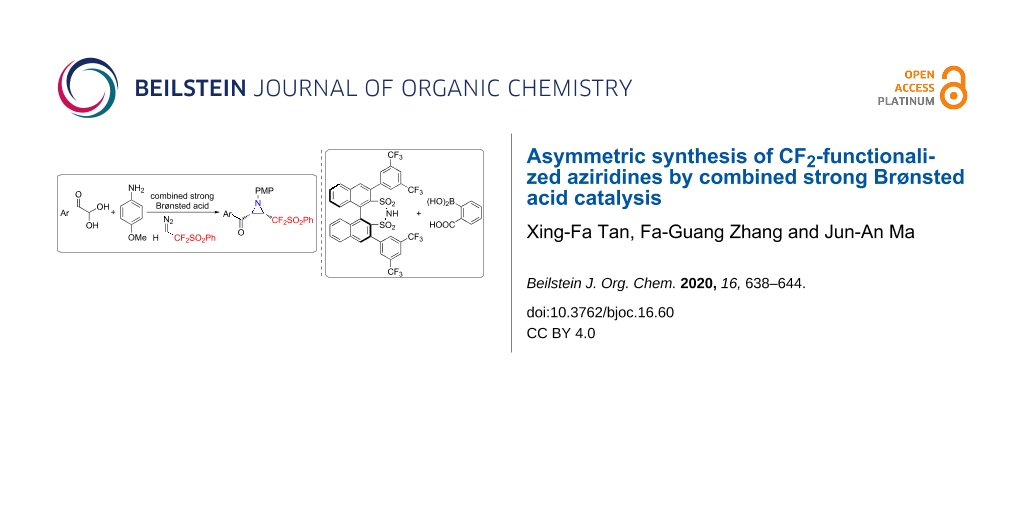