All articles from this author
Kennedy J. Ngwira

Readily synthesized biphenyl-2-carbaldehyde O-acetyl oximes were exposed to UV radiation affording phenanthridines. The scope and limitations of this novel reaction were explored. For example, exposure of 2',3'-dimethoxy-[1,1'-biphenyl]-2-carbaldehyde O-acetyl oxime to UV radiation afforded 4-methoxyphenanthridine in 54% yield. This methodology was applied to the synthesis of trisphaeridine to afford the product in four linear steps in an overall yield of 6.5% from 1-bromo-2,4,5-trimethoxybenzene.

Phenanthridine derivatives have captivated synthetic chemists and biologists alike since the 1960s due to their efficient DNA binding, antitumour and antiparasitic activities [1]. Such compounds include the DNA and RNA-fluorescent marker ethidium bromide (1), the cell viability probe propidium iodide (2) and the naturally occurring antiparasitic compounds, trisphaeridine (3), decarine (4) and nortidiene (5) (Figure 1).

The importance of the phenanthridine framework has inspired the development of numerous synthetic strategies to access these compounds. These include the classical Pictet and Ankersmit pyrolysis of N-benzylideneaniline [2], rhodium-mediated alkyne [2 + 2 + 2] cycloaddition reactions [3], and the palladium-catalysed aerobic domino Suzuki coupling/Michael addition reaction [4]. The most attractive and common strategies to phenanthridines rely on intramolecular cyclizations of various ortho-functionalized biaryl precursors furnishing the central ring through C–C bond formation. Indeed, this strategy has been employed for decades in reactions such as dehydrative cyclization of acyl-O-aminobiphenyls at very high temperatures (the Pictet–Hubert reaction and Morgan–Walls reaction) [5,6], which is also reflected in modern methods, such as ionic liquid- and transition metal-catalyzed and other metal-free transformations [1].

Inspired by the Rodrıguez and Walton approach, we sought to synthesize the nitrogen analogue of an angucycline known as phenanthroviridone 6, [12] from oxime 7 (Scheme 1). Based on the results reported by Rodrıguez and Walton we envisaged that under these photochemcial conditions, intermediate 8 would be formed. Contrary to the expected results, in our labs exposure of oxime 7 to UV irradiation yielded phenanthridine 9 as the main product alongside the nitrile 10 in lower yields [13]. We hypothesized that oxime 7 undergoes a homolytic cleavage of the N–O bond giving the iminyl radical 11 [14] followed by an intramolecular cyclization with concomitant expulsion of the ortho-methoxy group, liberating phenanthridine 9.

To investigate the scope and limitations of the reaction we initially opted to prepare a number of biaryl substrates possessing one aromatic electron accepting ring possessing a variety of methoxy substituents in a range of positions. In all cases at least one methoxy substituent was positioned ortho- to the biaryl axis. The other aromatic ring had to contain an oxime ester, which would form an iminyl electron donor, as shown in Scheme 2. As illustrated substrates 13a–f were accessed using the Suzuki–Miyaura cross-coupling reaction of a variety of halogenated methoxybenzene-containing compounds with 2-(formylphenyl)boronic acids in generally good yields [15].

As a next step, the biaryl aldehydes 13a–f were converted into their corresponding oximes 14a–f in good yields as a mixture of (E) and (Z)-isomers by reaction initally with hydroxylamine followed by acetyl chloride (Scheme 3).

The next step was the key photochemical ring closure to determine the scope and limitations of the novel phenanthridine-forming reaction from biaryl oximes (i.e., 14 → 15). Exposure of the substrates 14a–f to UV irradiation utilizing a 450 W Hg medium pressure lamp and through a quartz filter, afforded in most cases the phenanthridines. The first four cases, as shown in Scheme 4, resulted in the desired phenanthridines (15a–d) in varying yields, although in all cases the related benzonitriles (16a–d) were obtained.

Based on these results we suggest two possible mechanisms for these transformations. Both would proceed through an intermediary electron donor iminyl radical. In fact, iminyl radicals have been identified and studied by EPR spectroscopy in a number of related processes involving oxime derivatives [14]. As an example utilizing substrate 14d, intermediates such as the iminyl radical 17a and the ring closed intermediate 17b (Figure 3) would allow for the stabilization of the radical by the methoxy substituent in the ortho position to the departing substituent. The methoxy substituent then presumably loses a hydrogen radical to form acetic acid and intermediate 17c. Further loss of formaldehyde would restore aromaticity and furnish the desired phenanthridine 16d.

As the aromatic substrates 14a–d contain an electron-rich aromatic ring, the second possibility is the reaction proceeds via the oxidation of the methoxy-containing aromatic ring to afford intermediate 18a. The reaction could then proceed to afford intermediate 18b. Once intermediate 18b is formed an H+ is abstracted by an acetate ion from the methoxy substituent again forming formaldehyde and acetic acid, along with subsequent quenching of the cation to restore aromaticity. Examples of photoredox-catalyzed cation radical accelerated reactions with the aromatic methoxy group as a leaving group have been documented [16].

Our previous research, as shown in Scheme 1, indicated that exposure of the oxime ether 7 to UV radiation resulted in the formation of the phenanthridine 8. Attempts to synthesize the related oxime ethers from biaryl compounds 13a, 13c and 13e with O-phenylhydroxylamine as reagent were not successful and only resulted in the formation of the benzonitriles 16a, 16c and 16e. Presumably, the oximes were formed but were unstable and the facile elimination of phenol took place to liberate the benzonitriles.

Finally, the use of this methodology was demonstrated to be useful for the synthesis of the natural product trisphaeridine (3) [17]. Exposure of 1-bromo-2,4,5-trimethoxybenzene (19) to Suzuki–Miyaura coupling reaction conditions with boronic acid 20 resulted in the formation of aldehyde 21 (Scheme 5). Treatment of 21 with hydroxylamine hydrochloride and then acetyl chloride afforded oxime 22. Next was the key photochemical step. Exposure of 22 to UV irradiation resulted in the formation of the desired phenanthridine 23 in a disappointing yield of 41%, together with the benzonitrile 24. Phenanthridine 23 was then treated with CAN followed by zinc in acetic acid which resulted in the synthesis of trisphaeridine (3) in five steps in a moderate overall yield of 6.5% commencing from 19.

In summary, a novel UV light-mediated method for the synthesis of phenanthridines from biaryl oximes has been discovered. A key highlight includes having a methoxy substituent as the leaving group for the formation of phenanthridines. Structure–reactivity relationship studies also indicated that an ortho- or para-methoxy group must be present to stabilize the incipient radical or radical cation intermediate. We propose that the reaction is proceeding by means of the initial generation of an iminyl radical that cyclizes onto the electron-rich aromatic ring or through the formation of a radical cation on the electron-rich benzene ring. Finally, the methodology has successfully been applied to synthesizing the natural product trisphaeridine.

To a deoxygenated 0.25 M solution of arylboronic acid (1.2 equiv) in DME stirring under argon was added aryl bromide (1.0 equiv), Pd(PPh3)4 (10 mol %) and deoxygenated 2 M aqueous solution of Na2CO3 (4.0 equiv) in water. The resulting suspension was heated to reflux for 18 h. The resulting solution was allowed to cool to room temperature and was quenched with water (30 mL). The solution was extracted with EtOAc (3 × 50 mL). The combined organic layers were dried over MgSO4. The solvent was removed under reduced pressure and the resulting crude biaryl carbonyls were purified using silica gel column chromatography (using EtOAc/hexane mixtures as eluent).

Experimental details for the preparation of compounds 13a–f can be found in Supporting Information File 1.

To a solution of biaryl carbonyl (1.0 equiv) in EtOH (0.1 M) was added hydroxylamine hydrochloride (2.0 equiv) and sodium acetate (2.0 equiv). The resulting suspension was stirred under reflux for 18 h. The contents of the flask were allowed to cool to room temperature upon which a precipitate formed. The solvent was filtered and the resulting white solid was dissolved in EtOAc and washed successively with water and brine. The organic layer was dried over MgSO4 and the volatiles were removed under reduced pressure. The resulting biaryl oximes were used without further purification.

A two-necked flask equipped with a magnetic bar and a dropping funnel was charged with a biaryl oxime (1.0 equiv), dry CH2Cl2 and trimethylamine (2.0 equiv). The solution was cooled to 0 °C in an ice bath and a solution of acetyl chloride (2.0 equiv) in dry CH2Cl2 (2.75 M) was added dropwise for 15 min. The ice bath was removed and the resulting solution was allowed to slowly warm to room temperature. The reaction mixture was stirred overnight. Water (30 mL) was added and the layers were separated. The aqueous layer was extracted with CH2Cl2 (3 × 30 mL). The combined organic layer was washed with saturated NaHCO3 solution (10 mL) and brine (10 mL). The solution was dried over MgSO4 and the solvent was evaporated under reduced pressure. The resulting crude oxime esters were purified by silica gel column chromatography (using EtOAc/hexane mixtures as eluent).

Experimental details for the preparation of compounds 14a–f can be found in Supporting Information File 1.

A quartz UV reactor was charged with oxime ester and tert-butyl alcohol (5 mL) and the solution was degassed for 30 min. The solution was then subjected to UV irradiation (450 W medium pressure Hg lamp, through a quartz filter) for 3 h. The crude residue was purified by silica gel column chromatography (using EtOAc/hexane mixtures as eluent).

Experimental details for the preparation of compounds 15a–d and 16a–f as well as compounds 23 and 24 can be found in Supporting Information File 1.

© 2021 Ntsimango et al.; licensee Beilstein-Institut.
This is an Open Access article under the terms of the Creative Commons Attribution License (https://creativecommons.org/licenses/by/4.0). Please note that the reuse, redistribution and reproduction in particular requires that the author(s) and source are credited and that individual graphics may be subject to special legal provisions.
The license is subject to the Beilstein Journal of Organic Chemistry terms and conditions: (https://www.beilstein-journals.org/bjoc/terms) 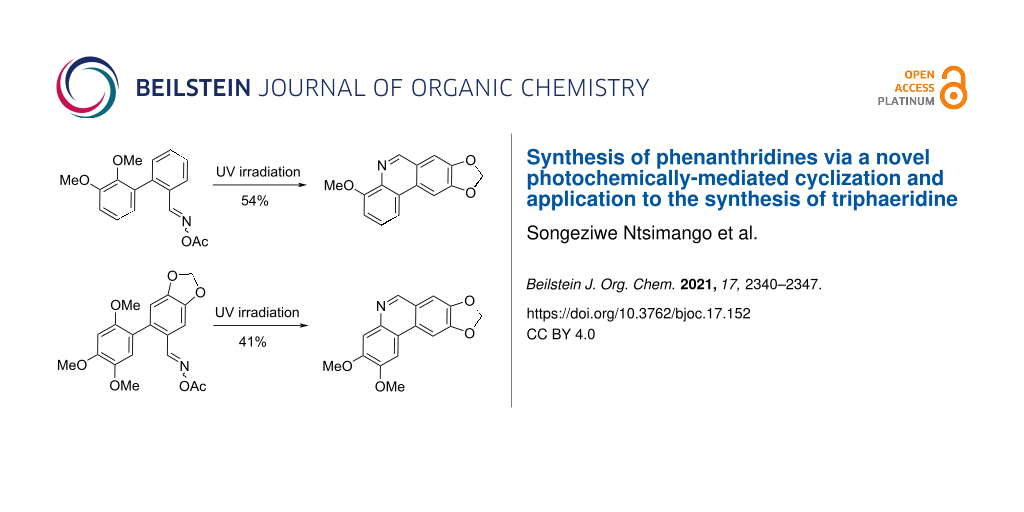