All articles from this author
Qiumeng Long


All articles from this author
Jihong Lu


All articles from this author
Li Wang


All articles from this author
Yuting You


All articles from this author
Xiaoting Yuan


All articles from this author
Qingmei Ge


All articles from this author
Hang Cong


All articles from this author
Mao Liu

A novel hemicucurbituril-based macrocycle, alternately consisting of amidobenzene and 2-imidazolidione moieties was designed and synthesized. Based on the fragment coupling strategy, nitrobenzene-containing hemicucurbituril was firstly prepared facilely under alkaline environment, and reduction of the nitro groups produced the desired amidobenzene-containing hemicucurbituril. As an original fluorescent chemosensor, it exhibited strong interactions with Fe3+ over other metal cations. The experimental evidence of fluorescence spectra suggested that a 1:1 complex was formed between this macrocycle and Fe3+ with an association constant up to (2.1 ± 0.3) × 104 M−1. Meanwhile, this macrocycle showed no obvious or only slight enhancement of the fluorescence intensity with selected anions.

Macrocycles with converging binding sites and functional groups hold a key position in supramolecular chemistry, which has been repeatedly confirmed by classic macrocyclic molecules, such as crown ethers, cyclodextrins, calixarenes, cucurbiturils and their homologues [1]. For the past decades, numerous intriguing macrocycles have come into our sight, cycloparaphenylenes [2-8], pillararenes [9-12], tiaraarenes [13,14], coronaarenes [15-17], heteracalixaromatics [18,19], and hemicucurbiturils [20] for instance, and these modified macrocycles have been applied into practical domains, such as chemosensors [21], drug delivery [22], and nano materials preparation [23].

Although cucurbiturils with their rigid hydrophobic cavities have found broad application in host–guest chemistry, they suffer from insolubility, difficulty in derivatization, and lack of chromophores. Hemicucurbit[n]urils (HQ[n]) and relevant derivatives [24] represent as a sub-group of the cucurbituril family [25], possessing much more flexible structures than Q[n]s, and are generally characterized by an electroneutral cavity and a negative electro-potential portal. Comparing the coordination properties of HQ[n]s with that of Q[n]s, Buschmann [26] observed that HQ[6] 2 (Scheme 1) formed complexes only with Ni2+, Co2+, and UO22+ with extremely low affinity, which may be caused by the poor solubility of HQ[6] 2 in aqueous solution and its universal “alternate” conformation. Most modified hemicucurbiturils 3 (Scheme 1) have been template synthesized [27] in succession by modified imidazolidiones, including bambusurils [28-30], cyclohexylhemicucurbiturils [31], and semithiobambusurils [32]. On the other hand, in previous works, authors discussed the ability of the derivatives for accommodating ions at submicromolar concentrations always by means of NMR spectroscopy [33]. Nevertheless, sensing by UV–vis or fluorescence spectra was hard to realize, for there is no chromophore in the frameworks. While hemicucurbit[n]urils with improvement in solubility, they still remain poor in derivatization. These adverse properties have impeded the development of hemicucurbit[n]urils to some extent.

Introducing aromatic fragments into macrocycles which have no chromophore is a viable strategy to expand the scope of their application. Ganin et al. [34] reported the synthesis and formation of several heterocalixarenes, which all comprised benzimidazol-2-one and 1,3-phenylene units in an alternate cyclic arrangement. In 2008, Kwit et al. [35] synthesized urea and thiourea derivatives of chiral triangular polyimine macrocycles. The macrocycles above mainly consisted of imidazole analogs and aromatic fragments. Šindelář and Lizal [36] also presented the synthesis of hybrid macrocycles containing glycoluril and aromatic units. In 2014, Keinan et al. [37] reported a series of macrocycles, consisting of alternating urea or thiourea and phenol units, namely, multifarenes. Hitherto, multifarenes and their derivatives have been applied as fluorescence and electrochemical chemosensors [38-45].

Herein, we wish to report our endeavor in the facile synthesis of a new hemicucurbituril homologue, aminobenzene-containing hemicucurbituril 4 (Scheme 1). It was assumed that the amino groups could act as reactive sites for derivatization, at the same time allowing for formation of coordination or hydrogen bonds with guests, and the aminobenzene unit as a chromophore could improve the optical properties. With this novel macrocycle in hand, the interactions with some metal cations have been initially studied. Among the metal cations examined, the fluorescence intensity of macrocycle 4 quenched significantly when adding the corresponding equivalents of Fe3+ and Cu2+. Notably, this macrocyclic host molecule formed 1:1 complexes with Fe3+ in DMF with an association constant up to (2.1 ± 0.3) × 104 M−1, which was contrary to those of hemicucurbiturils. As observed by fluorescence titration experiments, macrocycle 4 showed weak interactions with selected anions.

Because of the relatively strong nucleophilicity of the amino group in aniline, the synthesis could become complicated when aminobenzene is directly used as the starting substrate. Thus, the study was commenced with the synthesis of the nitrobenzene-containing hemicucurbituril 9 based on a fragment coupling strategy (Scheme 2). For this purpose, 1,3-bis(bromomethyl)-5-nitrobenzene, which was easily obtained by reduction of 5-nitroisophthalic acid with NaBH4 and BF3·Et2O followed by subsequent bromination with PBr3 [46] and 2-imidazolidinone (6) were used as building blocks. By controlling the molar ratio of 5 and 6 at 1:10 or 6:1 and the reaction conditions, products 7 and 8 were readily accessible with 25.3% yield and 30.0% yield based on starting compounds 5 and 6, respectively (Scheme 2). With the trimers 7 and 8 in hand, the reaction conditions for the [3 + 3] macrocyclic condensation were examined.

Due to the low solubility of compound 7, the subsequent reactions were conducted in DMF. With two equivalents of Cs2CO3 as the base and with or without an additive (Table 1, entries 1–4), no desired product was isolated. When the base was changed to NaH, to our delight, the macrocycle 9 was obtained even without any additive with 26.0% yield (Table 1, entry 5). As is known that the template plays an important role in the cyclization, some additives were examined in combination with NaH as the base for improving the yield (Table 1, entries 6–9). For the synthesis of hemicucurbituril derivatives in a previous study, halide ions usually facilitated the cyclization [27]. However, halide ions had no effect on the current process (Table 1, entries 6–8). This observation could infer that the nitrobenzene-containing hemicucurbituril 9 shows no obvious affinity to halide ions such as chloride and bromide. When NaClO4 was introduced as the additive, the yield was moderately improved to 30.0% (Table 1, entry 9). Prolonging the reaction time showed no obvious effect on the reaction (Table 1, entry 10).

Macrocycle 9 was obtained as a yellowish solid and dissolving it in a mixture of dichloromethane and methanol, a yellowish crystal was obtained by gradually evaporating the solvent, which was suitable for X-ray diffraction analysis. As shown in Figure 1, the nitrobenzene-containing hemicucurbituril 9 adopted a square-cavity conformation. Notably, three nitrobenzene units shared nearly a plane. It should be highlighted that macrocycle 9 gave concise proton and carbon signals in the 1H and 13C NMR spectra, respectively. As displayed in Figure S6 (Supporting Information File 1), only two sets of proton peaks and four sets of carbon peaks corresponding to aromatic portions of the aforementioned macrocycle, in addition to two sets of proton peaks corresponding to bridged methylene and methylene of imidazolidinone components were observed at rt. This indicated that the formed macrocycle is highly symmetric in solution.

With the novel macrocycle 4 in hand, initial experiments were conducted to explore its properties on recognizing metal cations. The fluorescence titration of macrocycle 4 with a series of selected cations (Figure 2), including Ag+, Na+, NH4+, Cu2+, Co2+, Cr3+, Fe3+, Ni2+, and Mn2+ (nitrate salts were used as cation sources) in DMF resulted in different degrees of quenching of the fluorescence emission of host 4. The results are collected in Figure 3 as the corresponding fluorescence quenching efficiency which was quantified using the equation ΔI = (I0 − I), where I is the fluorescence intensity response of the aminobenzene-containing hemicucurbituril 4 in the presence of metal cations, and I0 represents the corresponding fluorescence intensity in the absence of such metal cations. The addition of Fe3+ and Cu2+ caused a significant quenching of the fluorescence intensity. Evidenced by the fluorescence titration and Job’s plot experiments (Figure 4, bottom inset), aminobenzene-containing hemicucurbituril 4 interacts with Fe3+ and Cu2+ by forming a 1:1 complex in DMF solution. After depicting non-linear fitting curve and based on the titration data, the association constants for 1:1 complexation between the host 4 and the guest cations were calculated by Equation 1 [47],

The host–guest interactions between 4 and selected anions, including Cl−, Br−, I−, PF6−, BF4−, HSO4−, and ClO4− (tetrabutylammonium salts were used as anion source) were also tested tentatively by fluorescence titration (Figure 5). The overwhelming majority of aromatic molecules follow the heavy-atom effect rule [48]. However, it was surprisingly found that the coordination of selected anions, such as halide ions, especially the heavier iodide ion, to the macrocyclic sensor, slightly enhanced the fluorescence emission in CH2Cl2/CH3OH 4:1 (v/v) at 298 K, instead of quenching the fluorescence as predicted by the classic heavy-atom effect. The corresponding fluorescence enhancement efficiency of selected anions is collected in Figure 6. The addition of 20 equivalents of I− ions resulted in an approximately 24% enhancement of the fluorescence intensity, while other anions induced either no obvious change (Cl−, PF6−, and HSO4−) or only a slight enhancement (Br−, BF4−, and ClO4−) of the fluorescence intensity.

In summary, we have presented a novel type of hemicucurbituril derivative modified with aminobenzene. Based on the fragment coupling strategy, the nitrobenzene-containing hemicucurbituril 9 was synthesized by nucleophilic substitution reaction with two fragments 7 and 8. The desired aminobenzene-containing hemicucurbituril 4 was achieved by reduction of the corresponding nitrobenzene-containing hemicucurbituril 9. In the initial host–guest study, this novel macroycle 4 exhibited strong interaction with Fe3+ and formed a 1:1 complex with the association constant of Ka = (2.1 ± 0.3) × 104 M−1. In another perspective, the presence of the coordination of selected anions to the macrocyclic sensor enhanced the fluorescence emission in various degree, extremely contrary to the classic heavy-atom effect caused by a heavy atom. In general, this macrocyclic sensor showed high fluorescence quenching efficiency toward Fe3+ and Cu2+ over other cations and generally low fluorescence enhanced efficiency with selected anions.

Overall, the fluorescence response properties of aminobenzene-containing hemicucurbituril and its readily modifiable nature, provide a convenient platform for the exploration on host–guest interaction and supramolecular systems. Its applications and modifications are being pursued in our laboratory, and the results will be reported in due course.

The authors gratefully acknowledge the Science and Technology Project of Guizhou Province (QKHJC [2017]1027), “Chun Hui” Project of the Chinese Ministry of Education (Z2017007), the talent introduction Program of Guizhou University (GDRJHZ2014-21), and the National Natural Science Foundation of China (No. 21901053).

© 2021 Zeng et al.; licensee Beilstein-Institut.
This is an open access article licensed under the terms of the Beilstein-Institut Open Access License Agreement (https://www.beilstein-journals.org/bjoc/terms), which is identical to the Creative Commons Attribution 4.0 International License (https://creativecommons.org/licenses/by/4.0). The reuse of material under this license requires that the author(s), source and license are credited. Third-party material in this article could be subject to other licenses (typically indicated in the credit line), and in this case, users are required to obtain permission from the license holder to reuse the material. 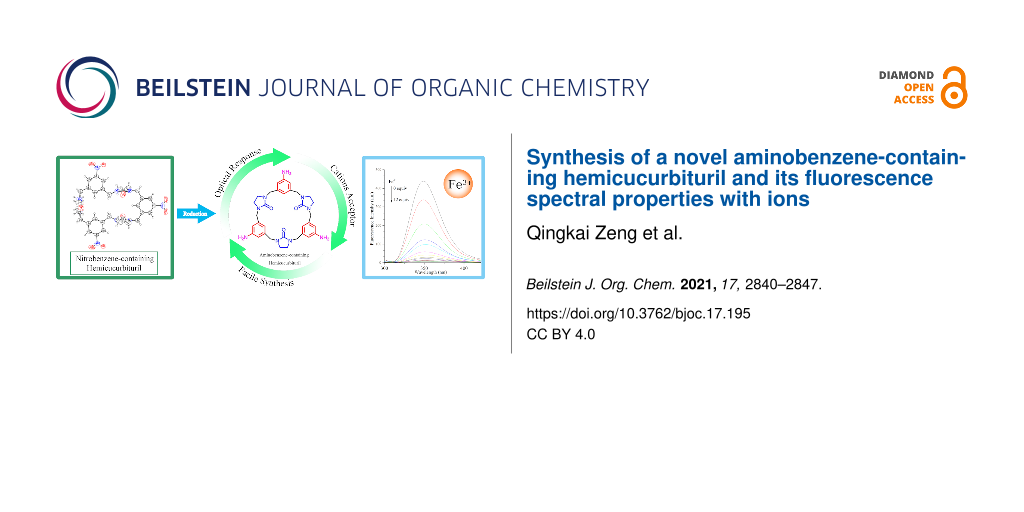