The efficient synthesis of two new stereoisomeric 3-aminocyclooctanetriols and their new halocyclitol derivatives starting from cis,cis-1,3-cyclooctadiene are reported. Reduction of cyclooctene endoperoxide, obtained by photooxygenation of cis,cis-1,3-cyclooctadiene, with zinc yielded a cyclooctene diol followed by acetylation of the hydroxy group, which gave dioldiacetate by OsO4/NMO oxidation. The cyclooctane dioldiacetate prepared was converted to the corresponding cyclic sulfate via the formation of a cyclic sulfite in the presence of catalytic RuO4. The reaction of this cyclic sulfate with a nucleophilic azide followed by the reduction of the azide group provided the target, 3-aminocyclooctanetriol. The second key compound, bromotriol, was prepared by epoxidation of the cyclooctenediol with m-chloroperbenzoic acid followed by hydrolysis with HBr(g) in methanol. Treatment of bromotriol with NaN3 and the reduction of the azide group yielded the other desired 3-aminocyclooctanetriol. Hydrolysis of the epoxides with HCl(g) in methanol gave stereospecifically new chlorocyclooctanetriols.

The synthesis of aminocyclitols has attracted attention because they contain substructures of many biologically active natural products [1-3]. They have become important structural components for drug development with a modifying action as inhibitors of glycosidases [4-10]. Aminocyclitols are amino polyhydroxy cycloalkanes [2] formally derived from cyclitols [11-15], which are polyhydroxylated cycloalkanes, via replacement of one of the hydroxy groups with an amino group. Many aminocyclitols and their derivatives have been found to possess antibiotic properties, such as validamycins (1) [16]. Validamycin A (1) contains two aminocyclitol units, the one is valienamine (2) and the other is validamine (3, Figure 1).

One of the most important conduramines 4 is valienamine (3) [17], which is found as a building block in several aminoglycoside antibiotics [2]. Furthermore, conduramines 4 and their derivatives are used as both inhibitors of glycosidases and useful intermediates in organic synthesis [18]. Halocyclitols are also cyclitol derivatives, in which one of the hydroxy groups is replaced by a halogen. They have also attracted interest in the last decade because of their biological activities [11,19]. For instance, some brominated quercitol (cyclohexanepentol) derivatives and bromoconduritol-B act as strong inhibitors of α-glycosidases [11,19]. Recent reviews report on the latest synthetic methodologies for aminocyclitols and related compounds [1-3,16].

Many methods have been previously reported for the synthesis of aminocyclitols containing five- and six-membered rings, along with their diverse biological activities [1-3,16-26]. However, only a limited number of synthetic methods are available for the synthesis of seven- [27,28], eight- [29-38], and nine- [35] membered aminocyclitols. Therefore, we were inspired to work on the development of the first synthesis of some C8-amino- and chloro-substituted cyclitols. Recently, we developed the first synthesis of various C8-amino- [29,31] and diaminocyclitol derivatives [30]. As part of our work involving the synthesis of C8-cyclitols, we report the stereospecific syntheses of two new 3-aminocyclooctanetriols and some chlorinated C8-cyclitols starting from cis,cis-1,3-cyclooctadiene.

For the synthesis of the other aminocyclooctanetriol 18, the diol 6a [33] was reacted with m-CPBA to give trans-epoxide isomer 13 [33] (79% yield) as the sole product (Scheme 3). Ring opening of trans-epoxide 13 by HBr(g)–MeOH gave bromotriol 14, which is an ideal substrate for the synthesis of the aminocyclooctanetriol 18. For structural proof, bromotriol 14 was converted into the corresponding acetate 15 using Ac2O in pyridine and DMAP (81%).

Next, to introduce the azido group in a cis-configuration, the bromotriol 14 was treated with sodium azide in DMF at 100 °C to afford azidotriol 16 as a single product in 78% yield. Compound 16 was transformed into the corresponding triacetate 17 for full characterization of the structure (Scheme 3). The position of the azide group in 17 was confirmed by the help of the COSY spectrum. The diagonal peak at 3.95 ppm has cross peaks with the protons resonating at 4.96 and 5.47 ppm, respectively. Analysis of these cross peaks shows that the cross peak at 5.47 ppm is weaker. This weak correlation is due to the small coupling constant (J = 2.2 Hz). On the other hand, the resonance signal of H-3 appears as a doublet of doublets at 3.95 ppm with coupling constants of J = 8.6 and 2.2 Hz. The large coupling constant (J = 8.6 Hz) clearly supports the trans relation of the protons H-3 and H-4 and the small coupling constant (J = 2.2 Hz) the cis relation of the protons H-3 and H-2. Finally, the desired aminocyclooctanetriol 18 was obtained by hydrogenation of the azide functionality in compound 16 in 97% yield.

In the second part of this work, we turned our attention to the stereospecific synthesis of chlorocyclooctanetriol 19 starting from the trans-epoxide 13 (Scheme 4). The hydroxy groups in 19 were acetylated to give 20 for further characterization of the structure. The position of the chlorine atom in 20 was confirmed with the help of the COSY spectra. The resonance signal of H-3 appears as a doublet of doublets at 4.35 ppm with coupling constants of J = 9.0 and 2.5 Hz. The large coupling constant (J = 9.0 Hz) clearly supports the trans relation of the protons H-3 and H-2 and the small coupling constant (J = 2.5 Hz) the cis relation of the protons H-3 and H-4.

As an alternate method for the synthesis of a novel chlorocyclooctanetriol isomer, epoxy-diol 22, which was synthesized in our previous work [31], was hydrolysed by HCl(g) in MeOH, resulting in the formation of two chlorocyclooctanetriol isomers 23 and 24 in an 85:15 ratio (1H NMR) in 96% combined yield (Scheme 5). Chlorotriols 23 and 24 were transformed into the corresponding triacetates 25 and 26 for full characterization of their structures. A mixture of isomeric triacetates 25 and 26 was isolated by column chromatography in 74% and 12% yields, respectively. The structures and configurations of these compounds were assigned using 1H NMR and 2D NMR spectroscopic data. The position of the chlorine atom in 25 was confirmed with the help of the COSY spectra. The diagonal peak at 4.26 ppm has cross peaks with the protons resonating at 2.15 and 5.62 ppm, respectively. Analysis of these cross peaks shows that the cross peak at 5.62 ppm is strong. This strong correlation is due to the large coupling constant (J = 8.7 Hz). The fact that the proton H-4 appears as a doublet of doublet of doublets with coupling constants of J = 13.1, J = 8.7, and 3.3 Hz also supports the trans relation (J = 8.7 Hz) of the protons H-4 and H-3. Similarly, the configuration of the chlorine atom and the acetoxy groups in 26 was determined with 1H NMR and COSY spectra. Finally, deacetylation of chlorotriacetates 25 and 26 was carried out with HCl(g) in MeOH to give the free chlorotriols derivatives 23 and 24.

The synthesis of two stereoisomeric 3-aminocyclooctanetriols 12 and 18 and their halocyclitol derivatives 14, 19, 23, and 24 was achieved for the first time concisely and efficiently from cis,cis-1,3-cyclooctadiene. The nitrogen functionalities were introduced by the substitution with NaN3 of the corresponding cyclic sulfate and bromo groups, while the halogen functionality was introduced to the molecule by opening of the epoxide ring with HBr(g) or HCl(g) in MeOH.

We would like to thank Professor Cavit Kazaz for performing the 2D NMR spectroscopy.

The authors are indebted to the Department of Chemistry (Atatürk University) and the Scientific and Technological Research Council of Turkey (TUBITAK, Grant No. TBAG-110T208) for their financial support of this work.

© 2021 Salamci and Zozik; licensee Beilstein-Institut.
This is an Open Access article under the terms of the Creative Commons Attribution License (https://creativecommons.org/licenses/by/4.0). Please note that the reuse, redistribution and reproduction in particular requires that the author(s) and source are credited and that individual graphics may be subject to special legal provisions.
The license is subject to the Beilstein Journal of Organic Chemistry terms and conditions: (https://www.beilstein-journals.org/bjoc/terms) 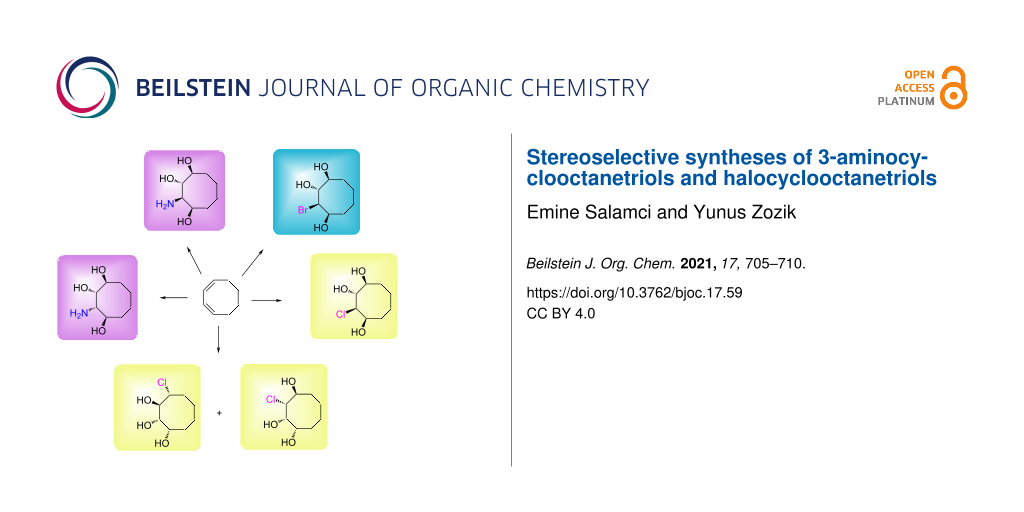