Aziridines are the smallest nitrogen-containing heterocycles and they are important building blocks in the synthesis as well as substructures of a number of biologically active natural and unnatural products [1-8]. Aziridines are valuable synthetic intermediates for the preparation of structurally complex molecules because of their versatility in numerous regio- and stereoselective ring opening and/or expansion reactions, as well as rearrangements [5]. The aziridine structural motif is present in natural products such as mitomycins and azinomycins (Figure 1) [1,5], which exhibit potent biological activities such as antitumor and antibiotic activities.

Therefore, synthetic methodologies for the preparation of the aziridinyl system have attracted attention in recent decades. Opening of the aziridine ring by using different nucleophiles gives the corresponding amino alcohols, amino esters, azido amines, amines, and other derivatives [9]. Furthermore, aziridine derivatives are valuable precursors for the synthesis of aminocyclitols, which can be found in nature in several families of natural and clinically important antibiotics [10].

The synthesis of the diol 5, which was prepared by reduction of the endoperoxide 4 with zinc was carried out as described in the literature [18]. Treatment of the diol 5 with benzyl bromide and NaH in DMF gave the corresponding (dibenzyloxy)cyclooctene 6 in 70% yield (Scheme 1). Oxidation of the dibenzylated compound 6 with OsO4/NMO provided the corresponding diol 7 in 90% yield. The exact configuration of 7 was confirmed by 1H and 2D NMR spectroscopic data. Next, mesylation of the hydroxy groups in 7 with MsCl in pyridine yielded dimesylate 8 in 90% yield. Thus, the dimesylate 8, which is one of the most relevant precursors for the synthesis of aminocyclitols, was synthesized from the diol 7. The structure of compound 8 was assigned on the basis of NMR spectroscopy. In the 1H NMR spectrum, we observed that methyl signals of the mesylate groups in 8 gave a multiplet, although compound 8 is symmetrical. To determine the existence of a dynamic process in the molecule 8, the NMR spectra of 8 were recorded at different temperatures. With an increase in the temperature, only one signal for the mesylate groups was observed in the spectrum. This difference is due to the occurrence of dynamic balance when the system is heated.

A general and versatile method for the synthesis of azides involves the reaction of a mesylate with sodium azide. Therefore, the dimesylate 8 was first reacted with an excess of sodium azide in DMF at 105 °C to give the diazide 9 (Scheme 2). However, the product was determined to be the azidomesylate 10 instead of the expected diazide 9 based on NMR spectroscopy. The position of the azide functionality in 10 was determined from its COSY spectrum. The diagonal peak at 3.97 ppm has cross peaks with the protons resonating at 3.84 and 4.92 ppm. Analysis of these cross peaks shows that the cross peak at 4.92 ppm is strong. This strong correlation supports the trans relation of the protons H-2 and H-1.

Next, in the preparation of the azidomesylate 10 from dimesylate 8, when the amount of 8 was increased (from milligrams to grams), the azido alcohol 11 was obtained during purification of the crude product from DMF. When the crude product 10 remains on the silica gel column with EtOAc/n-hexane 2:8 followed by methanol as the eluent for 48 hours to remove DMF, we determined from the NMR spectra that the mesylate group in compound 10 was converted to the corresponding alcohol 11 as the sole isomer via SN2 substitution by hydrolysis. In the azidolysis reaction of compound 8, we propose that because the azide group is bulkier than the water molecule, it could not substitute the second mesylate group, and therefore the diazide 9 could not form. The configuration of the hydroxy group in 11 was determined by the cross peak between the proton H-2 and the protons H-1 and H-3 in the COSY spectrum. Moreover, the fact that the proton H-1 gives a positive NOE clearly indicates that it should have a cis configuration relative to the proton H-2. For the synthesis of the aminocyclooctanetriol 13, hydrogenation of the azido alcohol 11 gave amine 12 in 95% yield (Scheme 2). Subsequent, benzyl deprotection with BCl3 of 12 resulted in the target compound 13 in 85% yield. The structures of compounds 12 and 13 are completely in agreement with our NMR spectral findings.

We then turned our attention to the synthesis of an aziridine-fused cyclooctane derivative from azidomesylate 10. Treatment [34] of 10 with Zn powder in the presence of NH4Cl in EtOH/H2O resulted in the corresponding aziridine 14 as a single product (Scheme 3). For further structural proof, the aziridine 14 was converted into the corresponding N-Boc-protected aziridine ester 15 with Boc2O/NEt3 in THF (yield 90%). Again, the structure of 15 was confirmed by 1D (1H and 13C) and 2D (COSY, NOE, and HMQC) NMR spectroscopic data. The protons H-2/H-7 giving a positive NOE clearly indicates that the protons H-2/H-7 should have a cis configuration relative to the protons H-1/H-8. Finally, benzyl deprotection with BCl3 of 14 afforded the product 16 in 84% yield. The structure of 16 was assigned on the basis of NMR spectroscopy.

In summary, we have achieved the synthesis of 3-aminocyclooctanetriol 13 and aziridinecyclooctanediol 16 starting from cis,cis-1,3-cyclooctadiene. The nitrogen functionalities were introduced by the substitution with NaN3 of the corresponding mesylate. Reduction of the azido functionalities gave monoaminocyclitol and aziridine-fused derivatives.

We would like to thank Baris Anil for performing the 2D NMR spectroscopy.

The authors are indebted to the Scientific and Technological Research Council of Turkey (TUBITAK, Grant No. TBAG-110T208) and the Department of Chemistry at Atatürk University for their financial support of this work.

© 2022 Salamci and Lafzi; licensee Beilstein-Institut.
This is an open access article licensed under the terms of the Beilstein-Institut Open Access License Agreement (https://www.beilstein-journals.org/bjoc/terms), which is identical to the Creative Commons Attribution 4.0 International License (https://creativecommons.org/licenses/by/4.0). The reuse of material under this license requires that the author(s), source and license are credited. Third-party material in this article could be subject to other licenses (typically indicated in the credit line), and in this case, users are required to obtain permission from the license holder to reuse the material. 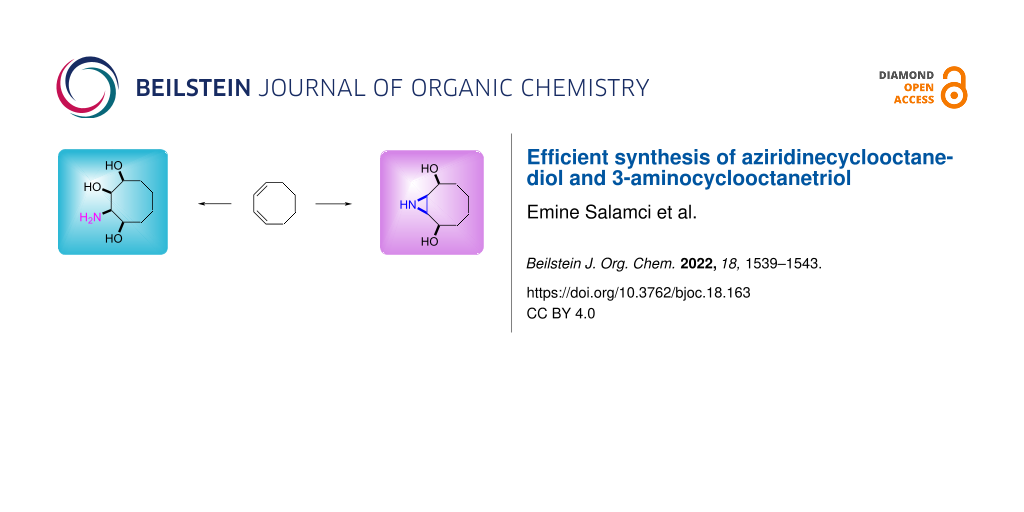