Dibenzosuberone and dibenzosuberenone derivatives are commonly used for the synthesis of biologically active compounds having enzyme inhibition and antiviral activity [1,2], and are found in the structures of many commercially available antidepressant drugs [3-12]. In addition, dibenzosuberenone (1) and polyconjugated derivatives exhibit photophysical properties such as photosensitization [13], fluorescence, and aggregation-induced emission (AIE) [14-16].

π-Conjugated polycyclic hydrocarbons (CPHs) containing polycyclic heteroaromatic molecules (PHAs) and aza-polycyclic aromatic hydrocarbons (aza-PAHs) have been attracting considerable attention as they are widespread in natural products, as well as in pharmaceuticals, agrochemicals, and organic materials. Among the π-CPHs, pyridazines and pyrroles have important roles [17-22].

On the other hand, many natural compounds that contain a pyrrole core, such as bilirubin, hemoglobin, chlorophyll a, and vitamin B12, are very important for life. In addition to being common in natural products and biological systems, the active ingredient of many top-selling drugs such as atorvastatin, sunitinib, and ketorolac, contains a pyrrole unit (Figure 1) [49].

In our previous study, we made a discovery that would form the basis of a new class of dyestuffs with skeletons unlike those of classic organic dyestuffs. In that study, two highly fluorescent dibenzosuberenone-based dihydropyridazine dyes, 3a,b, were synthesized, and it was found that they can be used as a selective and sensitive sensor of fluoride anions (Scheme 1, Table 1) [55]. In another work, we reported the design, synthesis, and structural and photophysical characterization of a new series of 3,7-substituted dihydropyridazine dibenzosuberenone units with electron-withdrawing and electron-donating functional groups [56].

In the first part of the study, we focused on the inverse electron-demand Diels–Alder cycloaddition reactions of dibenzosuberenone (1) with s-tetrazines 2a–l (Figure 2), which were synthesized according to the literature procedures (2j was synthesized by acetylation of 2i, while 2b and 2g were purchased) [57-63].

aAll reactions were carried using the compounds 1 and 2a–l (1.1 equivalents) in toluene in a sealed tube (see the Experimental section in Supporting Information File 1 for details).

Inverse electron-demand Diels–Alder reactions are cycloadditions between electron-rich dienophiles and electron-poor dienes. EDGs raise the electron density of dienes and, in parallel, raise the LUMOdiene–HOMOdienophile energy gap, and consequently the reactivity decreases. Although the tetrazine ring is an electron-poor diene, the dibenzosuberenone (1) dienophile is not electron-rich enough. Therefore, for such cycloaddition reactions, the tetrazine must be substituted by EWGs to decrease the electron density of the diene. Consequently, our results confirm that EDGs and EWGs play a crucial role in the reactivity.

The formation of the oxidized products 4k and 4l in these reactions was probably due to the properties of tetrazines because they are known to act, in some cases, as oxidizing agents in Diels–Alder reactions, depending on the structure of the diene and the reaction conditions [64]. A proposed reaction mechanism for the formation of the dibenzosuberenone derivatives 3 and 4 is illustrated in Scheme 3. Although 3k was isolated, 3l could not be detected in the reaction mixture due to its complete conversion to 4l, revealing its ease of oxidation compared to the chloro derivative 3k. In addition, dihydrotetrazines 6k and 6l could not be isolated, as probably compound 6k decomposed completely in the reaction medium and 6l decomposed following a bromine transfer to dibenzosuberenone (1, Scheme 3).

The formation of 5l was also an unexpected result because there has been no precedent reported to date, in which a tetrazine acts as a halogen source in the halogenation of a double bond. Therefore, the formation of 5l constitutes the first example of this unusual behavior. In the proposed mechanism illustrated in Scheme 4, tetrazine 6l first tautomerizes into 7, from which dibenzosuberenone (1) receives bromine to give 5l via bromonium 8. As tetrazine 9 was unstable under the current reaction conditions, it decomposed and could not be observed [65].

In another important part of this study, pyridazines were converted into the corresponding pyrroles via a ring contraction under reductive conditions in presence of zinc dust in acetic acid according to the Boger procedure, which is a highly reliable synthetic approach [66-68]. For pyrrole conversions, methoxycarbonyl- and 2-pyridylpyridazine derivatives 4a and 4b were used.

The reaction of 2-pyridylpyridazine 4b with Zn did not work at room temperature. Under reflux conditions compound 10ba was obtained, which contained the corresponding pyrrole and acetate structures. The acetate is formed by reducing the carbonyl group to alcohol and then reacting this alcohol with acetic acid. After hydrolysis of the acetate group with sodium hydroxide, alcohol derivate 10bb was formed. Oxidation of alcohol 10bb with MnO2 led to the formation of the corresponding ketone 10bc. Eventually, pyrrole derivative 10bc, having a carbonyl group, was obtained by these reactions (Scheme 7).

In order to increase the conjugation of dibenzosuberenone 1 for the photophysical aspect, the p-quinone methide derivative of dibenzosuberenone 11 was synthesized according to the method in the literature [69]. The products expected from the reaction of p-quinone methide 11 with tetrazines 2a,b are dihydropyridazines 12a,b, but this molecule could not be obtained. Instead, surprisingly, products 13a,b were obtained, of which the dihydropyridazine part was oxidized to pyridazine and the p-quinone methides part was reduced to phenol. After the phenolic part of 13a,b was oxidized to p-quinone methides with PIFA, 14a and 14b were synthesized in 87% and 91% yields, respectively. Moreover, by submitting 13a,b to reductive conditions in presence of Zn, the pyridazine part of 13a,b was converted to pyrrole 15a,b. Finally, the phenolic parts of 15a,b were oxidized to p-quinone methides 16a,b with PIFA in excellent yield (89–97%, Scheme 8).

In our previous work, we examined the photophysical and fluoride sensing properties of dihydropyridazine fluorescent dyes 3a,b in detail. In the present study, the effects of functional groups with different conjugations on maximum absorbance (λmax, abs) and emission (λmax, ems), and wavelengths of dihydropyridazines 3c–f and 3k were investigated. Compounds 3c,d, with high conjugation, show the highest absorption and emission maxima values and compounds 3f and 3k, with low conjugation, show the lowest absorption and emission maxima values (Figure 3, Figure 4, and Figure 5). All these molecules (3c–f and 3k) have Stokes shifts greater than 100 nm. The fluorescence quantum yields of 3c–f and 3k were calculated by comparison with a well-known reference, quinine sulfate, in 0.5 M H2SO4 solution (ФF = 0.546) as the standard dye (Table 2). When the UV–vis and fluorescence spectra of pyridazines and pyrroles were examined, it was seen that generally, they did not have effective absorbance or emission intensity. Although all π-conjugated pyridazines and pyrroles known in the literature did not show high emission, along with other photophysical properties the excellent coordination ability and especially their importance in biological systems always make these compounds valuable.

Novel polycyclic π-conjugated dibenzosuberenone-based dihydropyridazine dyes were synthesized by inverse electron-demand Diels–Alder cycloaddition reactions between dibenzosuberenone (1) and tetrazines bearing various substituents. These products showed long absorption wavelengths and emission bands, large Stokes shifts, and good fluorescence quantum yields. The dihydropyridazines were oxidized into pyridazines and then converted to pyrroles. Moreover, p-quinone methide derivatives of dibenzosuberenone-based pyridazines and pyrroles were synthesized. We continue intensively to perform various photochemical and biochemical studies on these compounds, which have the potential to be used in chemosensors, light harvesting, organic optoelectronics, metal coordination complexes and other photophysical applications and in biological systems.

We are grateful to The Scientific and Technological Research Council of Turkey (TUBİTAK) (Project number KBAG-215Z445) for financial support.

© 2021 Koçak and Daştan; licensee Beilstein-Institut.
This is an Open Access article under the terms of the Creative Commons Attribution License (https://creativecommons.org/licenses/by/4.0). Please note that the reuse, redistribution and reproduction in particular requires that the author(s) and source are credited and that individual graphics may be subject to special legal provisions.
The license is subject to the Beilstein Journal of Organic Chemistry terms and conditions: (https://www.beilstein-journals.org/bjoc/terms) 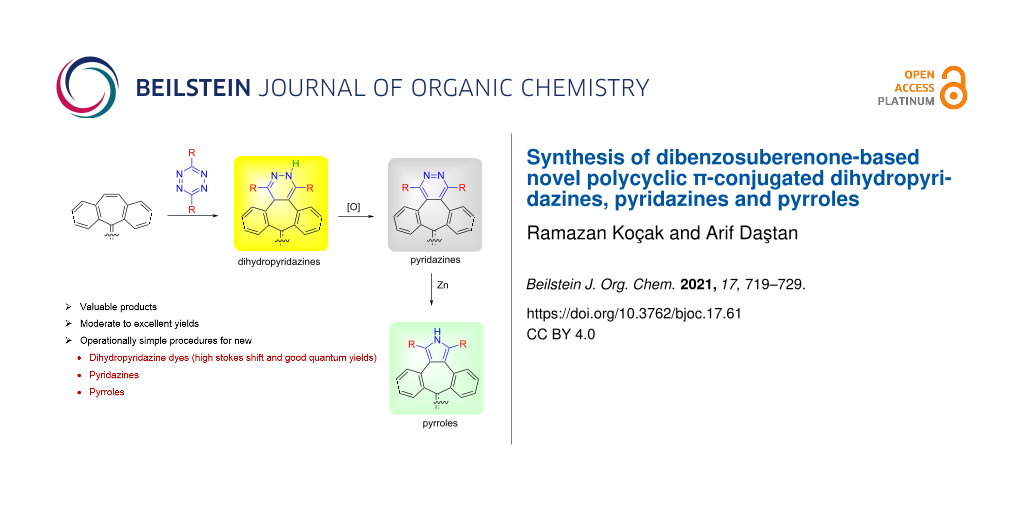