All articles from this author
Stefan Dix


All articles from this author
Matthew N. Hopkinson

A series of 2-(perfluoroalkylthio)benzothiazolium (BT-SRF) salts have been synthesized that serve as convenient sources of hitherto underexplored perfluoroalkylthiolate anions. An investigation of their reactivity in a deoxygenative nucleophilic substitution reaction led to the development of an unprecedented process that provides pentafluoroethyl and heptafluoropropyl thioethers directly from readily available alcohols.

The incorporation of fluorine-containing groups into organic molecules to modulate their biological or physical properties is nowadays a common strategy employed in the development of pharmaceuticals [1-4], agrochemicals [5] and materials [6]. Recent years have seen a surge in interest in emerging fluorinated motifs, which can offer improved performance over single fluorine atoms or perfluoroalkyl substituents. The trifluoromethylthio group (SCF3), for example, is attracting considerable attention due to its strong lipophilicity-enhancing influence (Hansch constant π = 1.44) and electron-withdrawing properties (Hammett constants σp = 0.50 and σm = 0.40) [7-12]. On the other hand, longer-chain perfluoroalkylthio groups (SRF, RF = CnF2n+1) have received comparatively little attention despite promising applications in liquid crystal displays [13,14], as pharmaceuticals and agrochemicals [15]. For example, analogues of the drug losartan featuring SC2F5, SC3F7 and SC4F9 groups have shown promise as treatments for hypertensive disorders [16]. Furthermore, in a number of drug candidates, exchanging a CF3 group with C2F5 has been shown to result in superior pharmacological properties; however, analogous studies comparing SCF3 with SC2F5 are scarce [17-19].

Much of the recent interest in the SCF3 group can be attributed to the development of several bench-stable and easily handled trifluoromethylthiolating reagents, which do not require specialist equipment or expertise [7-12]. Synthetic approaches towards longer-chain perfluoroalkylthio-substituted molecules, on the other hand, remain limited. In the vast majority of cases, the SRF group is not installed as an intact functional group but rather indirectly through perfluoroalkylation of a thiol or sulfide moiety already present on the substrate (Scheme 1a) [15,20-26]. By contrast, direct perfluoroalkylthiolation, which avoids pre-functionalization of the substrate, has been hindered by the lack of suitable reagents. In recent years, however, a selection of mostly electrophilic and radical sources has been introduced [27]. Nucleophilic perfluoroalkylthiolation is especially challenging due to the low nucleophilicity of heavily fluorinated thiolate anions and the potential for deleterious side-reactions resulting from β-fluoride elimination [28-34]. Only a handful of perfluoroalkylthiolate salts are known and, to the best of our knowledge, only one general direct nucleophilic perfluoroalkylthiolation of an alkyl electrophile has been reported to date [35]. This process used an umpolung strategy with activation of typically electrophilic perfluoroalkylsulfenamide reagents by iodide, releasing −SC2F5 or −SC3F7 anions in situ, which could then react with a selection of alkyl halides (Scheme 1b).

In 2019, we reported a new reagent for nucleophilic trifluoromethylthiolation based on the benzothiazolium motif: BT-SCF3 [36-38]. This easily handled solid, which is stable at least over several months under ambient conditions, could be engaged in efficient deoxygenative trifluoromethylthiolation reactions of readily available aliphatic alcohols. Some features of this process led us to consider whether related benzothiazolium salts featuring longer-chain SRF substituents could serve as practical reagents for investigating nucleophilic perfluoroalkylthiolation reactions. Firstly, the simple two-step synthesis of BT-SCF3 from inexpensive 2-mercaptobenzothiazole (MBT) can be readily adapted to provide a wide range of different BT-SRF reagents. Moreover, in situ activation of the benzothiazolium salt by the alcohol provides a highly reactive alkyl electrophile, which can compensate for the inherently low nucleophilicity of −SRF anions [39]. Herein, we report the successful synthesis of several BT-SRF reagents and provide insights into the reactivity of different perfluoroalkylthiolate anions in nucleophilic substitution reactions. This study led to the development of unprecedented deoxygenative pentafluoroethyl- and heptafluoropropylthiolation reactions directly from alcohols (Scheme 1c).

Five BT-SRF reagents were selected to provide a good overview on the reactivity of different perfluoroalkylthio groups; four linear BT-SRF derivatives (BT-SC2F5, BT-SC3F7, BT-SC5F11 and BT-SC8F17) and the perfluoroisopropyl species BT-SCF(CF3)2. Each reagent was synthesized according to the two-step procedure shown in Scheme 2. Firstly, MBT was reacted with a perfluoroalkyl iodide and NaH in DMF under irradiation with UVA LEDs (λmax = 365 nm). In all cases, efficient S-perfluoroalkylation was observed within 16 h at rt, and the heteroaromatic compounds 1a–e could be isolated in good yields. Subsequent N-methylation with methyl trifluoromethanesulfonate in CH2Cl2 also proceeded smoothly with the BT-SRF reagents each being obtained after 48 h at rt in high yields upon precipitation with Et2O. As with BT-SCF3, further purification of the reagents was not required and each was found to be stable at least over several months when stored in a fridge.

With a selection of BT-SRF reagents in hand, we next sought to evaluate their relative reactivity in a benchmark nucleophilic perfluoroalkylthiolation. Thus, 4-nitrobenzyl alcohol (2a) was reacted with 1.25 equivalents of BT-SC2F5 and 2 equivalents of NEt(iPr)2 in MeCN for 2 h at rt. The analysis of the crude reaction mixture by NMR revealed the formation of two products: the desired (pentafluoroethyl) thioether 3a in 78% NMR yield and a second species with 19F and 1H spectra consistent with the trifluoromethyl thionoester 4a (7% NMR yield, Table 1, entry 1). The formation of both species can be explained by the mechanism shown in Scheme 3 [36]. Nucleophilic attack of the alcohol in the presence of NEt(iPr)2 at the C2-position of the BT reagent affords the key electrophilic 2-alkoxybenzothiazolium species A and the perfluoroalkylthiolate anion. Nucleophilic substitution then affords product 3 and thiocarbamate byproduct B. As a side-reaction, β-fluoride elimination from the perfluoroalkylthiolate anion can occur, leading to a thiocarbonyl fluoride species, which can subsequently react with the alcohol, delivering thionoester 4. β-Fluoride elimination is a known decomposition pathway of −SCF3 and has even been exploited in synthetic trifluoromethylthiolation and fluorination processes [32-34].

The formation of the side-product 4a could be effectively suppressed by conducting the reaction at −40 °C. Under these conditions, the desired (pentafluoroethyl) thioether 3a was obtained in 99% NMR yield (91% isolated yield, Table 1, entry 2). At this stage, we were ready to evaluate the relative efficiency of different perfluoroalkylthiolate nucleophiles. Each of the other BT-SRF reagents (1.25 equiv) was reacted with alcohol 2a and NEt(iPr)2 (2 equiv) in MeCN at −40 °C and, after 2 h, the crude mixture was analysed by 1H and 19F NMR. As shown in Table 1, a significant decrease in the nucleophilic perfluoroalkylthiolation efficiency was observed upon increasing the RF chain length (Table 1, entries 2–5). For example, thionoester 8a was generated as a significant side product (26% NMR yield) when using BT-SC5F11, while thioether 9a and thionoester 10a were provided in almost equal amounts when BT-SC8F17 was reacted with 2a. The increased prevalence of the β-fluoride elimination pathway with longer perfluoroalkylthio chains likely reflects the lower nucleophilicity of the increasingly fluorinated thiolate anions. Moreover, (perfluoroisopropyl) thioether 11a was produced in only trace amounts in the reaction with BT-SCF(CF3)2, which is consistent with the expected lower nucleophilicity of the sterically more encumbered anion (Table 1, entry 6).

The efficient perfluoroalkylthiolation of 2a observed with BT-SC2F5 led us to further investigate this approach as a route towards (pentafluoroethyl) thioethers. Deoxygenative substitution reactions of this type are synthetically appealing as they avoid pre-generation of an active electrophile such as an alkyl halide.

A selection of benzylic alcohols 2 was reacted under the standard conditions with BT-SC2F5 (1.25 equiv) and NEt(iPr)2 (2 equiv) in MeCN at −40 °C, providing the corresponding (pentafluoroethyl) thioethers 3 in generally high yields (Scheme 4). A wide range of functional groups were tolerated, including the halogens Cl, Br, and I, thus opening the door for further functionalization of the products via cross-coupling. The propargylic alcohol substrate 2i could also be converted into thioether 3i in 81% yield, although the allylic alcohol 2j was less efficient (13% yield of 3j). The primary aliphatic (pentafluoroethyl) thioether 3k could also be obtained in the reaction between alcohol 2k and BT-SC2F5, however, with this less activated substrate, the thionoester 4k was generated as a significant side product. Finally, the suitability of this methodology for the preparation of (heptafluoropropyl) thioethers was investigated by reacting a selection of benzylic alcohols 2 with BT-SC3F7. As for the pentafluoroethylthiolation reactions, efficient conversion was observed with products 5 being obtained in high yields of up to 98%.

In conclusion, a series of bench-stable and easy to handle 2-(perfluoroalkylthio)benzothiazolium (BT-SRF) salts have been synthesized and investigated as reagents for the direct nucleophilic perfluoroalkylthiolation of aliphatic alcohols. While β-fluoride elimination was a significant side reaction with longer-chain SRF groups, efficient deoxygenative functionalization was observed with BT-SC2F5 and BT-SC3F7. This synthetically attractive reaction provides pentafluoroethyl and heptafluoropropyl thioethers directly from readily available alcohols, thus avoiding the pre-formation of an alkyl halide. This straight-forward route should inspire further investigations of perfluoroalkylthio groups in pharmaceutical, agrochemical and materials science.

The Supporting Information contains experimental procedures, characterization data of all BT-SRF reagents and isolated products as well as copies of NMR spectra.

We would like to acknowledge the assistance of the Core Facility BioSupraMol supported by the DFG.

© 2021 Ariamajd et al.; licensee Beilstein-Institut.
This is an Open Access article under the terms of the Creative Commons Attribution License (https://creativecommons.org/licenses/by/4.0). Please note that the reuse, redistribution and reproduction in particular requires that the author(s) and source are credited and that individual graphics may be subject to special legal provisions.
The license is subject to the Beilstein Journal of Organic Chemistry terms and conditions: (https://www.beilstein-journals.org/bjoc/terms) 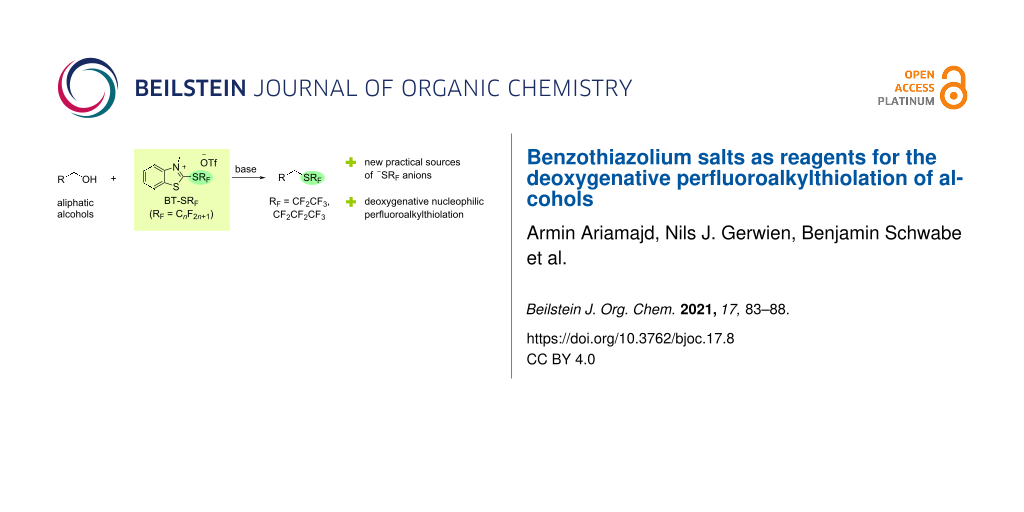