All articles from this author
Angelina N. Kravchenko


All articles from this author
Galina A. Gazieva

The thiazolidin-4-one heterocyclic system is a well-known, accessible and, as a consequence, a widely used pharmacophore in the chemistry of biologically active compounds possessing antimicrobial [1], antituberculosis [2], anti-inflammatory [3,4], anticancer [5], antidiabetic [6,7], and antiviral activities [8].

A significant number of biologically active thiazolidines amount to their heteroannelated derivatives, namely, condensed thiazolo[3,2-a]pyrimidines [9] and thiazolo[3,2-b]-1,2,4-triazoles [10], as well as related thiazolo[3,2-b]-1,2,4-triazines and thiazolo[2,3-c]-1,2,4-triazines possessing antimicrobial, antidepressant, anti-HIV, and anticancer activities [10-15]. Modifications of the position 5 of the thiazolidine cycle often lead to an enhancement of the pharmacological properties of the resulting products, which have received considerable attention in reviews [16,17]. The structures of some of the thiazolidine derivatives and their biological properties are specified in Figure 1.

One of the effective approaches to the preparation of heteroannelated thiazolidin-4-one derivatives consists in the condensation of acetylenedicarboxylic acid esters with heterocyclic compounds containing a thiourea fragment, e.g., pyrimidinethiones [18,19], 1,2,4-triazolethiols [20], and 1,2,4-triazinethiones [21,22]. An important feature of the reactions of dialkyl acetylenedicarboxylates with asymmetric substrates is the high regioselectivity of the cyclizations of intermediate Michael adducts at one of several reactive nitrogen atoms. For example, reported by Giannola et al. [21], the reaction of 3-thioxo-1,2,4-triazin-5-ones 1 with dimethyl acetylenedicarboxylate (DMAD) leads to the only products, namely, thiazolo[3,2-b]-1,2,4-triazines 2 (Scheme 1) while the regioisomeric thiazolo[2,3-с]-1,2,4-triazine derivatives remain unavailable.

We started by examining the regioselectivity of the condensation of imidazo[4,5-e]triazine-3-thiones 3 with DEAD. The effects of temperature, the nature of the solvent, and the structure of the starting substrates on the total yields and ratios of isomeric products 4 and 5 were investigated (Table 1, see also Supporting Information File 1 for details).

The reaction of 5,7-dimethylimidazo[4,5-e]triazine-3-thione (3a) with DEAD proceeded in alcohols with moderate regioselectivity and isomer 5 predominated in the filtered precipitates (Table 1, entries 1–3). The use of absolute or 95% ethanol as a solvent did not significantly affect the total yields of isomers 4 and 5 and their ratio, while carrying out the reaction in acetic acid, as expected [13,23,24], led to a change in regioselectivity and the formation of linear isomer 4 as the main product (Table 1, entries 4–6).

5,7-Diethylimidazo[4,5-e]triazine-3-thione (3b) reacted with DEAD in a similar manner (Table 1, entries 7 and 8), but with less selectivity. Substrates 3 bearing phenyl substituents at the different positions, vice versa, reacted with DEAD with high selectivity to form imidazo[4,5-e]thiazolo[3,2-b]triazines 4 as main products (Table 1, entries 9–14). The corresponding isomeric imidazo[4,5-e]thiazolo[2,3-c]triazines 5 were formed in trace amounts and were detected only in the 1H NMR spectra of the evaporated reaction mixtures. The reactions of bicyclic structures 3a–g with dimethyl acetylenedicarboxylate proceeded with similar selectivity. However, the total yields of the corresponding methyl esters were often higher.

The optimized conditions found for each group of starting substrates 3a–g were applied to prepare a series of imidazo[4,5-e]thiazolo[3,2-b]triazines 4a–n with a linear structure (Scheme 2). Precipitates of compounds 4c–g,j–n bearing phenyl substituents contained no impurities of the corresponding isomers 5, while the structures 4a,b,h,i were isolated in individual form only during fractional crystallization from the reaction mixtures.

Indeed, boiling ethyl ester 4h in methanol in the presence of 0.5 equiv of a 40% KOH aqueous solution resulted in a skeletal rearrangement of the tricyclic system, which, however, was accompanied by reesterification with methanol and partial hydrolysis of the ester group. As a result, the methyl ester 5a was obtained in 66% yield (Scheme 3).

Because the reaction of imidazo[4,5-e]triazines 3a,b with DMAD or DEAD led always to the formation of compounds 4a,b,h,i along with their isomeric structures 5a,b,h,i, an attempt was made to sequentially obtain and convert the resulting mixtures of compounds 4 and 5 into the individual isomers 5 in a one-pot mode (Scheme 5).

The plausible mechanism of the formation of compounds 4 and 5 is detailed in Scheme 6. The reaction of imidazothiazolotriazines 3 with esters of acetylenedicarboxylic acid affords the Michael addition product A, which undergoes cyclization involving the nitrogen atom N(2) to give compound 4. Rearrangement of the latter is, probably, a result of a transamidation reaction upon the treatment with a base, for example, alkoxide anion. The nucleophilic attack of the alkoxide anion leads to the cleavage of the C(7)–N(8) bond to form intermediates B and C followed by the recyclization of the thiazolidine ring involving the nitrogen atom N(4) [25] to afford the product 5.

The structure of compound 5i was additionally confirmed by X-ray diffraction analysis (Figure 3).

Thus, the conditions for the regioselective preparation of each of the regioisomeric functionalized derivatives of imidazo[4,5-e]thiazolo[3,2-b]-1,2,4-triazines 4 and imidazo[4,5-e]thiazolo[2,3-c]-1,2,4-triazines 5 in an individual form were found. The methodology proved to be effective for the synthesis of a wide range of target compounds with various substituents in the tricyclic fragment. Investigations of the antiproliferative activity of the synthesized products 4 and 5, as well as possible ways of their further transformations in basic media, are continuing.

Crystal structure determination was performed in the Department of Structural Studies of the N. D. Zelinsky Institute of Organic Chemistry, Russian Academy of Sciences.

© 2021 Izmest’ev et al.; licensee Beilstein-Institut.
This is an Open Access article under the terms of the Creative Commons Attribution License (https://creativecommons.org/licenses/by/4.0). Please note that the reuse, redistribution and reproduction in particular requires that the author(s) and source are credited and that individual graphics may be subject to special legal provisions.
The license is subject to the Beilstein Journal of Organic Chemistry terms and conditions: (https://www.beilstein-journals.org/bjoc/terms) 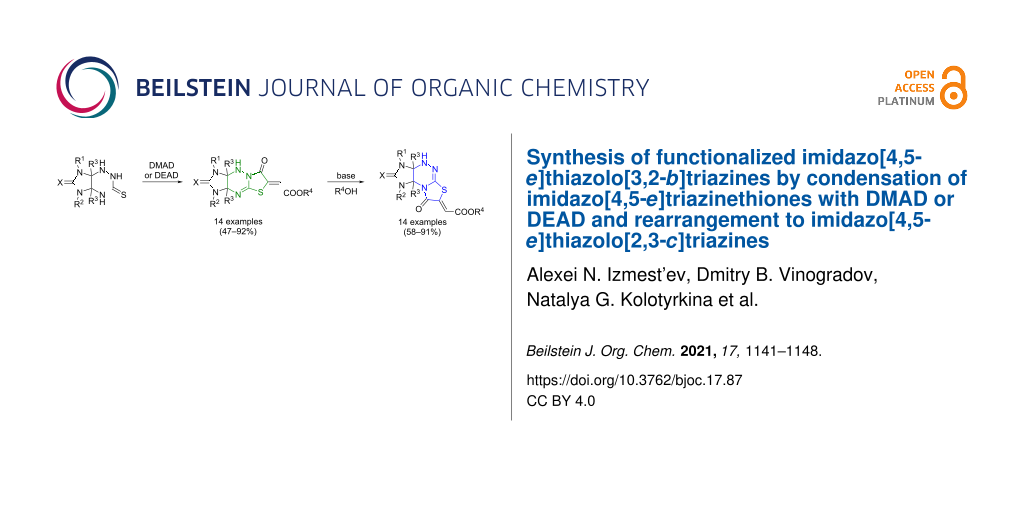