All articles from this author
Xuan Zhou


All articles from this author
Zhiyong Chen


All articles from this author
Changxu Wang


All articles from this author
Shunjie Wang


All articles from this author
Hanbing Teng

An economical and versatile protocol for the one-pot synthesis of monomethylamines by reduction of N-substituted carbonylimidazoles with NaBH4/I2 in THF at reflux temperature is described. This method used no special catalyst and various monomethylamines can be easily obtained in moderate to good yields from a wide range of raw materials including amines (primary amines and secondary amines), carboxylic acids and isocyanates. Besides, an interesting reduction selectivity was observed. Exploration of the reaction process shows that it undergoes a two-step pathway via a formamide intermediate and the reduction of the formamide intermediate to monomethylamine as the rate-determining step. This work can contribute significantly expanding the applications of N-substituted carbonylimidazoles.

N-Methylamines are widely found in natural products, fine chemicals, agrochemicals, pharmaceuticals and dyes [1-4]. Traditional methods for the preparation of N-methylamines involve the direct methylation of amines by using methyl halides [5-7], dimethyl sulfate [8], diazomethane [9], methyl triflate [10,11] or dimethyl carbonate [12-15] as the methylation reagents and the reductive amination reactions by using formaldehyde or paraformaldehyde as the “indirect” alkylation reagents [16-19]. Recently, a variety of promising methylating agents or C1 sources such as formic acid [20,21], methanol [22-31] and carbon dioxide (CO2) [32-39] have been developed for the N-methylation of amines. However, these N-alkylation methods often require the employment of expensive catalysts, and the N-alkylation of primary amines generally does not stop with monomethylation as expected and inevitably provides a mixture of multiple methylated products because of the competing overalkylation reactions [14,16-43].

In order to obtain pure monomethylation product, the conventional method is to introduce alkyl formate, formacyl, methylene or their equivalents to amines, followed by reduction to give monomethylamines [44-51]. Protection/methylation/deprotection strategies have also been developed for the preparation of monomethylation objects, which are particularly suitable for peptide chemistry since protecting groups are often required in peptide synthesis [52,53]. These multistep reaction methods are conducive to avoid overmethylation products.

In this work, our goal is to reduce the carbonyl group in N-substituted carbonylimidazoles. The inexpensive NaBH4/I2 system has great attraction because it is more reductive due to the generation of highly reactive BH3–THF by adding iodine to NaBH4 in THF [76-78] and the reaction conditions are not significantly changed compared to our previous preparation of formamide. With this reduction system, we achieved a one-step conversion from N-substituted carbonylimidazoles to methylamines. This interesting work will help to synthesize pure monomethylamines from a wide range of raw materials including amines, carboxylic acids and isocyanates under mild and safe reaction conditions.

aThe reactions were carried out with 1b (1.0 equiv, 2 mmol), NaBH4, I2, THF (25 mL) under reflux temperature. bThe reaction was monitored by TLC. cIsolated yield was based on 1b. dThe isolated yield of 1c and N-(phenethyl)formamide was 1% (trace) and 62%, respectively.

The impact of different substituents on the reaction were well investigated. As shown in Table 2, the alkyl substituents (R) in the N-alkyl carbonylimidazoles had a weak influence on the reaction (Table 2, entries 1–7, 18, and 19). Whether the N-alkyl carbonylimidazoles bear one substituent (e.g., 1b–5b, 15b, 18b, 19b) or two substituents (e.g., 6b and 7b), the reaction proceeded well, affording the desired product in 60–83% yields. Note that the reaction time of 7b (2 h) was obviously longer than that of 1b–6b (1 h), 18b (1 h) and 19b (1 h), possibly because the steric hindrance of the two benzyl groups on 7b slowed the reaction. Encouraged by the above mentioned results, we then tested N-aryl carbonylimidazoles in the reaction. To our delight, N-aryl carbonylimidazoles with either electron-donating (9b and 10b) or electron-withdrawing groups (11b, 16b and 17b) on the aryl rings were all transformed, affording the expected products in 70–85% yields. N-Aryl carbonylimidazoles with two substituents, such as 12b (R1 = methyl, R2 = phenyl) and 13b (R1 = phenyl, R2 = phenyl), were also amenable to this protocol, giving the corresponding products 12c and 13c in 71% and 67% yield, respectively. Furthermore, by using 2.0 equiv of I2 and 10.0 equiv of NaBH4, the substrate 14b with two N-substituted carbonylimidazole moieties could also undergo this reaction and provided the desired product 14c in moderate yield (70%). Additionally, our protocol was applicable to prepare N,N-dimethylamines by step-by-step methylation. Employing the mono-methylated products 1c and 8c, N,N-dimethylamine 6c and 12c can be obtained, respectively, via repeating our synthesis procedure.

In order to understand the reduction selectivity of the method, the substrates bearing acetamide groups (19b and 20b) were tested in the reaction. To our pleasure, both aliphatic and aromatic amides reacted smoothly and provided the expected products in satisfactory yields, with the acetyl groups being unaffected. This suggested that the N-acetyl groups in N-substituted carbonylimidazoles were well tolerated during the reduction, and our method showed interesting reduction selectivity.

The substrate 13b, bearing two phenyl rings, which not only had a large steric hindrance like 7b, but also had a strong conjugation system, took much longer time (6 h) to complete the reaction.

As shown by the reaction mechanism, the methyl group was converted from the carbonylimidazole moiety by full reduction and therefore no competing overalkylation reactions occurred.

In conclusion, we have developed an economical and versatile protocol for the one-pot synthesis of monomethylamines by reduction of N-substituted carbonylimidazoles with the NaBH4/I2 system. This work further extends the application of N-substituted carbonylimidazoles. By employing inexpensive and commercially available reagents, a variety of aliphatic and aromatic monomethylamines were obtained in moderate to good yields from a broad substrate scope including not only amines (both primary amines and secondary amines) but also carboxylic acids or isocyanates. The acetamide group was well tolerated in our reduction, implying our method showed interesting reduction selectivity.

We are grateful for financially supported by the National Training Programs of Innovation and Entrepreneurship for Undergraduates (No. 20181049715023).

From amines to (form)amides: a simple and successful mechanochemical approach

© 2022 Chen et al.; licensee Beilstein-Institut.
This is an open access article licensed under the terms of the Beilstein-Institut Open Access License Agreement (https://www.beilstein-journals.org/bjoc/terms), which is identical to the Creative Commons Attribution 4.0 International License (https://creativecommons.org/licenses/by/4.0). The reuse of material under this license requires that the author(s), source and license are credited. Third-party material in this article could be subject to other licenses (typically indicated in the credit line), and in this case, users are required to obtain permission from the license holder to reuse the material. 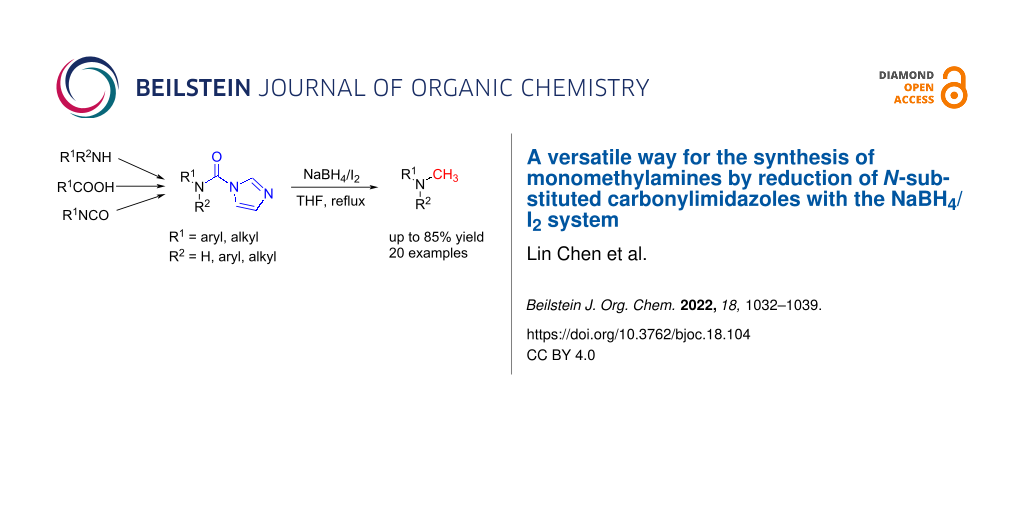