All articles from this author
Aarti Peswani


All articles from this author
Raj Kumar Bansal

The >C=P– or –N=P– functionality in 1,3-azaphospholo[1,5-a]pyridine, named as 2-phosphaindolizine and its 1- and 3-aza derivatives act as dienophiles and undergo Diels–Alder reactions with 1,3-dienes. However, the dienophilic reactivity is affected by the nature of the substituent groups on the two sides of the σ2,λ3-P atom and also by the presence of more nitrogen atom(s) in the five-membered ring. The conceptual density functional theory (DFT) calculations have been used in recent years to predict the reactivity of organic molecules in reactions. We calculated global hardness (η), global softness (S), electronic chemical potential (μ), electrophilicity (ω), and nucleophilicity (N) indices of four classes of 2-phosphaindolizines, on the basis of which their observed relative dienophilic reactivities could be rationalized. Besides, the Fukui functions of the carbon/nitrogen and phosphorus atoms of the >C=P– and –N=P– functionalities were also computed which revealed their hard electrophilic character and accorded well with the dienophilic reactivities observed experimentally. Furthermore, energies and symmetries of the lowest unoccupied molecular orbitals (LUMO) of 2-phosphaindolizines were found to be in conformity with their dienophilic reactivities.

In 1988, we developed a simple synthetic method for the synthesis of 1,3-azaphospholo[1,5-a]pyridine derivative (1, R1 = Me, R2 = PhCO) from the reaction of 2-ethyl-1-phenacylpyridinium bromide with PCl3 and Et3N, which was named as 2-phosphaindolizine perceiving it to result from a formal CH/P exchange at the 2-position of indolizine (2) (Figure 1) [1]. Subsequently a good library of these interesting compounds became accessible [1].

After having access to a good number of differently substituted derivatives of these four classes of 2-phosphaindolizines, we were motivated to explore their reactivity as they apparently have many active functionalities. In view of the earlier reported results of the Diels–Alders (DA) reaction across the >C=P– functionality in phosphaalkenes [6], phosphaketenes [6], heterophospholes [7], phosphinines [8], and azaphosphinines [9] (a recent review incorporates all these classes [10]), we investigated DA reactions across the >C=P– or –N=P– functionality present in these compounds. During this, we found that these compounds exhibited quite different dienophilic reactivities towards 2,3-dimethyl-1,3-butadiene (DMB). 2-Phosphaindolizines having electron-withdrawing groups (EWG) both at the 1 and 3-positions, namely 1,3-bis(ethoxycarbonyl)-1,3-azaphospholo[1,5-a]pyridine (1: R1 = R2 = COOEt) and its isoquinoline analogue, reacted with DMB and isoprene to give the [2 + 4] cycloadducts, in the latter case, regioselectively [11]. However, 2-phosphaindolizines having an EWG at the 3-position only, namely 3-ethoxycarbonyl-1-methyl-2-phosphaindolizine (1: R1 = Me, R2 = COOEt) did not undergo the DA reaction with DMB alone or in the presence of sulfur even when refluxing in toluene [12]. The reaction could be accomplished only in the presence of a Lewis acid catalyst, namely ethylaluminum dichloride [13]. Furthermore, when carrying out the reaction of compounds 1 (R1 = Me, R2 = COOMe, COOEt, COOCMe3) with DMB in the presence of the catalyst O-menthoxyaluminium dichloride, generated in situ, complete diastereoselectivity was observed.

The DA reactions of 1-aza-2-phosphaindolizines 3 with DMB and isoprene occurred at rt, although slowly and were speeded up by the use of sulfur or selenium which oxidized the phosphorus atom of the initially formed product thereby pushing the reaction in the forward direction [14].

The difference in the reactivities of two classes of 2-phosphaindolizines namely the 2-phosphaindolizine substituted by the EWG at 3-position only (1, R1 = Me, R2 = CO2Me) and substituted by EWGs both at the 1- and 3- positions (1, R1 = R2 = CO2Me) could be rationalized on the basis of DFT calculations at the B3LYP/6-31G (d,p) level of theory wherein it was revealed that the nitrogen lone-pair is transferred effectively into the azaphospole ring. In compound 1 (R1 = Me, R2 = CO2Me) the EWG at the 3-position emphasizes this effect further. As a result, the >C=P– functionality becomes electron-rich and does not undergo a DA reaction with an electron-rich diene such as DMB. However, in the case of compound 1 (R1 = R2 = CO2Me), the EWG at the 1-position functions as electron-sink between the nitrogen lone-pair and the >C=P– functionality. As a result, the latter retains its electron-deficient character and undergoes DA reaction with DMB (Figure 3) [15].

The DFT based on the Hohenberg–Kohn theorems and later on the Kohn–Sham approximation made it possible to study the progress of organic reactions with manageable computational costs [16,17]. Parr and co-worker [18] developed “Conceptual DFT”, a subfield of DFT which allows to calculate various reactivity descriptors, such as electrochemical potential, electrophilicity and nucleophilicity indices, global hardness, electronegativity, etc.

The concept of hard–soft acid–base (HSAB) was used to explain the reactivity of the organic molecules towards electrophilic and nucleophilic reagents [19]. Thus a quantitative descriptor, the Fukui function was defined as

for nucleophilic attack and

where ρN+1(r), ρN(r), and ρN−1(r) are the electron densities at a point r in the system with N+1, N, and N−1 electrons, respectively, all with the ground-state geometry of the N-electron system. It was concluded that the regions of a molecule with a large Fukui function are chemically softer than the regions where the Fukui function is small. Thus, by invoking the HSAB principle it becomes possible to predict the behavior of a particular site in the molecule towards hard or soft reagents [19].

Yang and Mortier [20] suggested the use of the gross charge (qr) at a particular atom r in a molecule obtained from the Mulliken population analysis (MPA) for the calculation of the condensed Fukui function (f(r)) at that atom. The condensed Fukui function using MPA often has negative values and in this context, the use of Hirshfeld population analysis (HPA) based on the Stock-Holder idea was recommended [21,22].

We report herein different conceptual DFT descriptors of four classes of 2-phosphaindolizines and the attempts to compare the dienophilic reactivities of the >C=P– or –N=P– functionality present in these compounds towards 1,3-butadiene.

We investigated the following model DA reactions (Table 1) at the DFT (B3LYP/6-31+G (d)) level of theory.

The values of the energies of the frontier molecular orbitals (FMOs) global hardness (η), global softness (S), electronic chemical potential (µ), electrophilicity (ω) and nucleophilicity (N) indices of 2-phosphaindolizines 6 and 1,3-butadiene (7) are given in Table 2.

2-Phosphaindolizines and 1,3-butadiene are soft electrophiles and nucleophile, respectively, and in accordance with the HSAB principle, they are expected to react. In the series 6A of 2-phosphaindolizines, the softness decreases in the order 6Ad > 6Ab > 6Ac > 6Aa. No representatives of 6Aa and 6Ab have been prepared so far. Thus, compound 6Ad is expected to undergo a DA reaction faster than compound 6Ac which is in agreement with the reported results; the former reacts with DMB without the aid of a catalyst [11] whereas the latter undergoes DA reaction only in the presence of a catalyst [13]. However, it may be noted that although compounds 6Bb and 6D are less soft than 6Ac, they undergo DA reaction without the aid of a catalyst [14]. As discussed later, this can be rationalized on the basis of the local hardness represented by the Fukui function.

The electrophilicity (ω) [24] and nucleophilicity (N) [25,26] indices are other useful descriptors that explain relative reactivities of molecules in chemical reactions [27]. The electrophilicity indices of 2-phosphaindolizines also decrease in the same order as observed on the basis of global hardness and electronic chemical potential. Furthermore, the electrophilicity index of compound 6D (0.148) is close to that of 6Cb (0.156) and like 6Cb, it is expected to undergo a DA reaction with 1,3-butadiene without the aid of a catalyst, a fact in conformity with the experimental results.

As discussed earlier, the descriptor Fukui function was developed to determine the hard/soft character of the reactive site in a molecule [19-21]. The Fukui functions at the carbon/nitrogen and phosphorus atoms of the >C=P– or –N=P– functionality of 2-phosphaindolizines calculated from the Mulliken and Hirshfeld charges are given in Table 3.

Except the series, Ba > Bb, this order is similar to those obtained on the basis of the other descriptors discussed earlier. It may be noted that the values of the Fukui function of the P atom in compounds D (−0.361) and Bb (−0.382) are comparable with that in Ca indicating their comparable reactivities towards the DA reaction with 1,3-butadiene, i.e., they are expected to undergo the DA reaction without the aid of a catalyst.

The FMOs of a molecule are very important parameters to reveal its reactivity towards a reagent [28]. In the DA reaction of 2-phosphaindolizines with 1,3-butadiene, the HOMO of the latter will interact with the LUMO of the former and the energy gap (∆E) between the two will give an indication about the reactivity of the 2-phosphaindolizines (Figure 4).

The HOMO of 1,3-butadiene (ψ2) and the LUMOs of different 2-phosphaindolizines are given in Figure 5. It may be mentioned that for compounds Aa, Ab, Ba, Ca, and D, the respective LUMOs were not found to be of the appropriate symmetry. Instead, LUMO + 1 for Aa, Ab, Ca, and D and the LUMO + 3 for Ba have the required symmetry.

A closer look at the energies of the LUMOs (or LUMO + 1 for Aa, Ab, Ca, D and LUMO + 3 for Ba) reveals that they increase in the following order: Ad < Ac < Ab < Aa. In view of this, the reactivity of 2-phosphaindolizines towards DA reaction with 1,3-butadiene is expected to change in the order: Ad > Ac > Ab > Aa. Similarly, the order of reactivity in the other two classes would be Bb > Bc; Cb > Ca. These orders of reactivities are almost similar to those obtained on the basis of other reactivity descriptors discussed earlier.

The reactivity descriptors, namely global hardness/softness, electronic chemical potential, electrophilicity and nucleophilicity indices as well as the Fukui functions computed from the conceptual DFT calculation at the B3LYP/6-31+G (d) level of theory could be used successfully to rationalize the experimentally observed dienophilic reactivites of four classes of 2-phosphaindolizenes. The energies of the LUMOs (or in some cases LUMO + 1 or LUMO + 3) of 2-phosphaindolizines with respect to the energy of the HOMO of 1,3-butadiene were also found in accordance with their relative dienophilic reactivites. Thus, conceptual DFT descriptors can be advantageously used to predict the reactivities of the organophosphorus compounds.

All calculations were done using the Gaussian 16 program [29]. We found that almost without exception, hybrid of Becke 3 and LYP correlation functional [30,31] has been used for determining reactivity descriptors [32-35] and the results were found to be independent of the basis sets [33]. In view of this, we carried out all calculations at the B3LYP/6-31+G (d) level of theory. Furthermore, Phukan et al. [32] calculated electrophilicity indices of a number of aziridines in the gas and solvent phases and observed that in both cases, a similar pattern of varying the values is followed. In view of this, we carried out all calculations in the gas phase only. Thus all geometries were optimized in the gas phase at the B3LYP/6-31+G(d) level of theory. Frequency calculations were done at the same level to determine zero-point correction and to characterize energy minimum with no imaginary frequency.

The computational facilities provided by the IIS (deemed to be university), Jaipur, India are gratefully acknowledged.

© 2022 Beig et al.; licensee Beilstein-Institut.
This is an open access article licensed under the terms of the Beilstein-Institut Open Access License Agreement (https://www.beilstein-journals.org/bjoc/terms), which is identical to the Creative Commons Attribution 4.0 International License (https://creativecommons.org/licenses/by/4.0). The reuse of material under this license requires that the author(s), source and license are credited. Third-party material in this article could be subject to other licenses (typically indicated in the credit line), and in this case, users are required to obtain permission from the license holder to reuse the material. 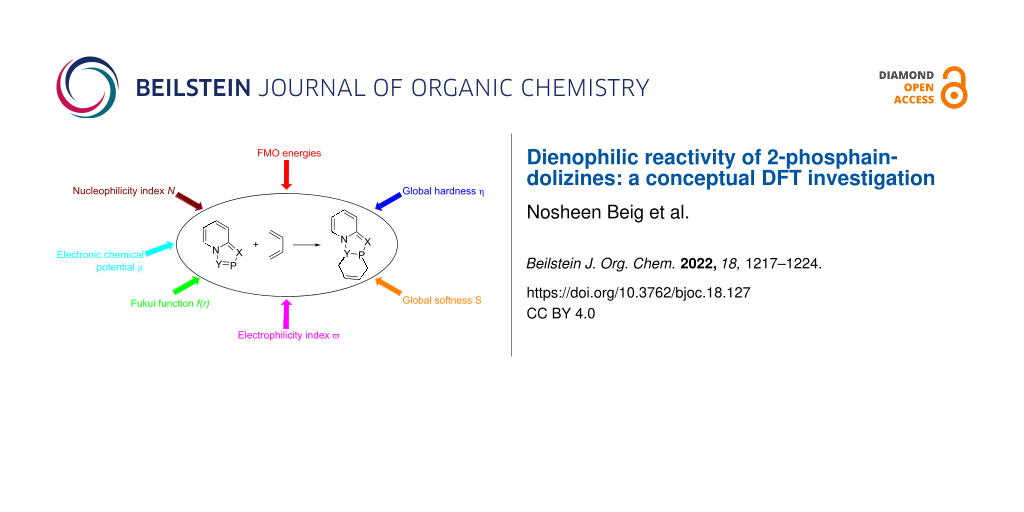