All articles from this author
Yuhong Zhong


All articles from this author
Renshi Luo


All articles from this author
Zhanyi Zhang


All articles from this author
Jiuzhong Huang


All articles from this author
Ping Yang

The acceptorless dehydrogenative coupling (ADC) reaction is an efficient method for synthesizing quinoline and its derivatives. In this paper, various substituted quinolines were synthesized from 2-aminobenzyl alcohols and aryl/heteroaryl/alkyl secondary alcohols in one pot via a cyclometalated iridium-catalyzed ADC reaction. This method has some advantages, such as easy availability of raw materials, mild reaction conditions, wide range of substrates, and environmental friendliness which conforms to the principles of green chemistry. Furthermore, a gram-scale experiment with low catalyst loading offers the potential to access the aryl/heteroaryl quinolones in suitable amounts. In addition, the antibacterial and antifungal activities of the synthesized quinolines were evaluated in vitro, and the experimental results showed that the antibacterial activities of compounds 3ab, 3ad, and 3ah against Gram-positive bacteria and compound 3ck against C. albicans were better than the reference drug norfloxacin.

As an important class of heterocyclic compounds, quinoline and its derivatives widely exist in natural products. They have a wide range of biological activities, such as antibacterial [1], anti-inflammatory [2], antitumor [3], antihepatitis C (HCV) [4], antituberculosis (TB) [5], antimalarial [6], and anti-Alzheimer's disease (AD) [7]. Among these biological activities, their antibacterial effect is more prominent. As we know, antimicrobial agents are a significant source to overcome bacterial infections, but overuse will lead to drug resistance [8], so it is necessary to synthesize new antibacterial compounds to overcome this problem. Quinolines whose physical and chemical properties and pharmacological activities could be improved by structural modifications are used as important antibacterial agents. The compounds are characterized by high efficiency, low toxicity, and low residue, and play an important role in pharmacy and medicine. Therefore, it is still of great significance to develop new and broad-spectrum quinoline antibacterial agents, and the research on antibacterial quinolines is one of the most promising and dynamic research fields in contemporary anti-infective therapy. For example, Eswaran's group [9] synthesized some 1,2,4-triazoquinoline derivatives, and the biological activity evaluation showed that most of the compounds had a higher antibacterial activity (the optimal MIC value was 6.25 mg/mL) against Gram-positive bacteria, Gram-negative bacteria and all tested fungi than the standard ciprofloxacin (Figure 1a). Bodke's group [10] synthesized a series of carbohydrazide derivatives through reaction of 2-methylbenzofuran-2-quinoline-4-carboxylate with hydrazine hydrate in refluxing ethanol (Figure 1b). All compounds showed higher activity against Staphylococcus aureus than ampicillin and the optimal MIC value was 0.064 mg/mL. In addition, Aravinda's group [11] prepared 3-(1,3-dioxolan-2-yl)benzo[h]quinolines containing thiol and selenol groups in one pot by microwave irradiation, and tested the antibacterial activity of the compounds. The results showed that the antibacterial effect of some compounds was better than ciprofloxacin (Figure 1c).

In recent years, the synthesis of quinolines has received great attention and remarkable achievements have been made to produce quinolones by various methods: Skraup reaction [12], Doebner–Miller reaction [13], Combes synthesis method [14], Conrad–Limpach reaction [15], Pfitzinger reaction [16], and Friedländer reaction [17]. Among these syntheses, the Friedländer reaction [17] is one of the most commonly used methods for the synthesis of quinolines. However, it has the disadvantages of harsh reaction conditions and low yields owing to the reactivity of o-aminobenzaldehyde when used as raw material. In order to solve such problems, chemists have developed ADC reactions catalyzed by metal complexes (such as Ir [18,19], Ru [20-24], Re [25], Mn [26,27], Pd [28], Ni [29], Cu [30], etc.) to synthesize quinolines using o-aminobenzyl alcohol as starting material.

ADC reactions have the advantages of high atom economy, simple operation, clean and green, and have become a research hotspot [31-35]. Cyclometalated iridium complexes with good catalytic efficiency and selectivity are very effective catalysts in ADC reactions. Moreover, these catalysts are easy to synthesize and stable to air [36], and have good operability and reproducibility [37,38]. In recent years, our research group has carried out relevant research on ADC reactions catalyzed by cyclometalated iridium complexes and obtained some interesting research results [39].

In previous studies [39-42], we found that cyclometalated iridium catalysts can effectively catalyze the dehydrogenation of alcohols to produce carbonyl compounds and hydrogen gas. Therefore, we used cyclometalated iridium complex (TC-6) to catalyze the ADC reaction of o-aminobenzyl alcohols 1 and aryl/heteroaryl/alkyl secondary alcohols 2 that allowed for the efficient synthesis of a series of quinolines 3 (up to 95% yield and >99:1 selectivity) (Figure 2). A preliminary evaluation of the compounds’ potential antibacterial activity was also performed.

We started our research with the ADC reaction of 2-aminobenzyl alcohol (1a) with 1-phenylethanol (2a) as model reaction in the presence of various cyclometalated iridium complexes TC-1–TC-6 (Table 1). Encouragingly, employing TC-1 as the catalyst, toluene as the solvent and t-BuOK as the base at 100 °C, quinoline 3aa was obtained in 73% yield accompanied by 27% yield of 1,2-dihydroquinoline 4aa (Table 1, entry 1). Then, several other cyclometalated iridium complexes were studied. The catalysts TC-2 and TC-4 containing electron-donating ligands provided quinoline 3aa in higher chemoselectivity and yield (Table 1, entries 2 and 4). On the contrary, the catalysts TC-3 and TC-5 containing electron-withdrawing ligands offered lower chemoselectivity and yield (Table 1, entries 3 and 5). Further catalyst screening revealed that TC-6 (6-methoxy) is the best catalyst for the ADC reaction affording the product in a yield of 95% (Table 1, entry 6). On the other hand, when no catalyst was added to the reaction system under the above conditions, the reaction also proceeded, but the chemical selectivity and yield were significantly lower (Table 1, entry 7).

In order to obtain optimal conditions, the bases, reaction medium, and temperature were also surveyed (Table 2). First, several bases were examined and the results showed that different bases have different effects on the chemoselectivity and yield of the reaction. The weak bases including HCO2Na, CH3CO2K, and Na2CO3, resulted in decreased yields of quinoline 3aa (Table 2, entries 1–3). Interestingly, the chemoselectivity of the reaction and product yield were significantly improved with strong bases, such as NaOH, KOH, or t-BuOK (Table 2, entries 4–6). To our excitement, a loading of 1.1 equiv of t-BuOK delivered the product 3aa in the yield of 96% with perfect selectivity (Table 2, entries 6–8).

The excellent developed methodology prompted us to further extend the practicality of the catalytic system. Firstly, we carried out a gram-scale reaction with the template reaction under the optimal catalytic system, which delivered quinoline 3aa in 94% isolated yield (Figure 3a). Additionally, the 2-furanquoline product 3ai was also obtained up to a gram-scale with excellent yield (92%) by iridium-catalyzed ADC reaction of 2-aminobenzyl alcohol 1a and 2-furanol 2i (Figure 3b).

According to experimental results and literature findings [19,28,29,43,44], a possible mechanism of cyclometalated iridium-catalyzed ADC reaction was proposed (Figure 5). Firstly, by the interaction of TC-6 with 1a/2a under the “dehydrogenative” process, the Int-I/Int-II were formed [28,29]. Then, Int-III and 2-aminobenzaldehyde (5)/acetophenone (6) were formed by β-H elimination of Int-I/Int-II. In this process, an amount of liberated H2 would be released from the dehydrogenation of 2-aminobenzyl alcohol/1-phenylethanol according to the previous literature [28]. Lastly, the desired product 3aa was obtained by the condensation and cyclization of the aldehyde 5 with acetophenone (6) under base conditions.

In summary, we have developed a new route for the efficient synthesis of quinoxaline and its derivatives with high yield and good chemoselectivity via the ADC reaction of 2-aminobenzyl alcohol and aryl aryl/heteroaryl/alkyl secondary alcohols including electron-donating (Me, OMe) and electron-withdrawing substituents (F, Cl, Br) catalyzed by cyclometalated iridium complexes. Besides, this reaction could also be used on a gram-scale, by which the aryl/heteroaryl quinolines were synthesized. In the evaluation of antimicrobial activity, the antimicrobial effects of compounds 3ab, 3ad, 3ah, 3ck, 3an and other compounds were better than the parent drug norfloxacin. This method could be used to further synthesis of quinoline derivatives and provide theoretical support for the synthesis of new antibacterial drugs.

© 2022 Shui et al.; licensee Beilstein-Institut.
This is an open access article licensed under the terms of the Beilstein-Institut Open Access License Agreement (https://www.beilstein-journals.org/bjoc/terms), which is identical to the Creative Commons Attribution 4.0 International License (https://creativecommons.org/licenses/by/4.0). The reuse of material under this license requires that the author(s), source and license are credited. Third-party material in this article could be subject to other licenses (typically indicated in the credit line), and in this case, users are required to obtain permission from the license holder to reuse the material. 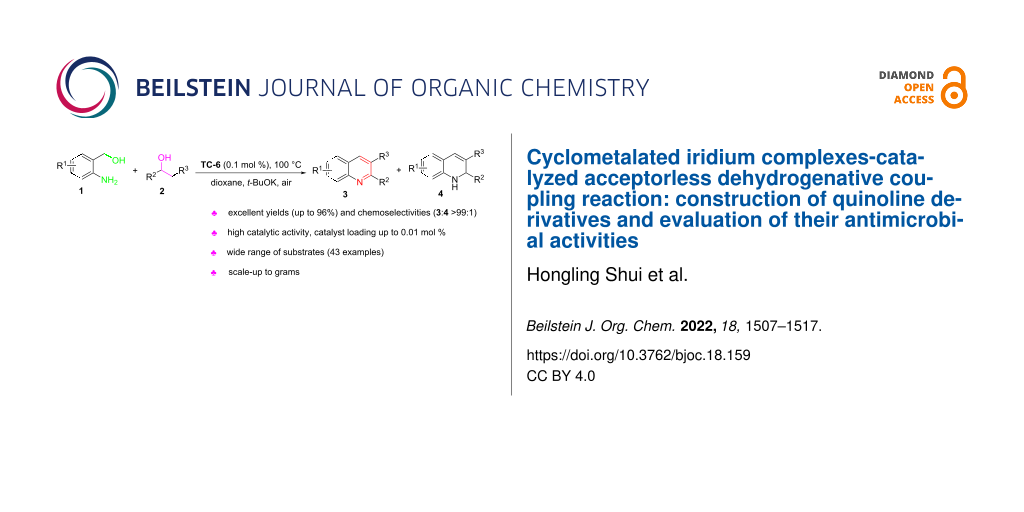